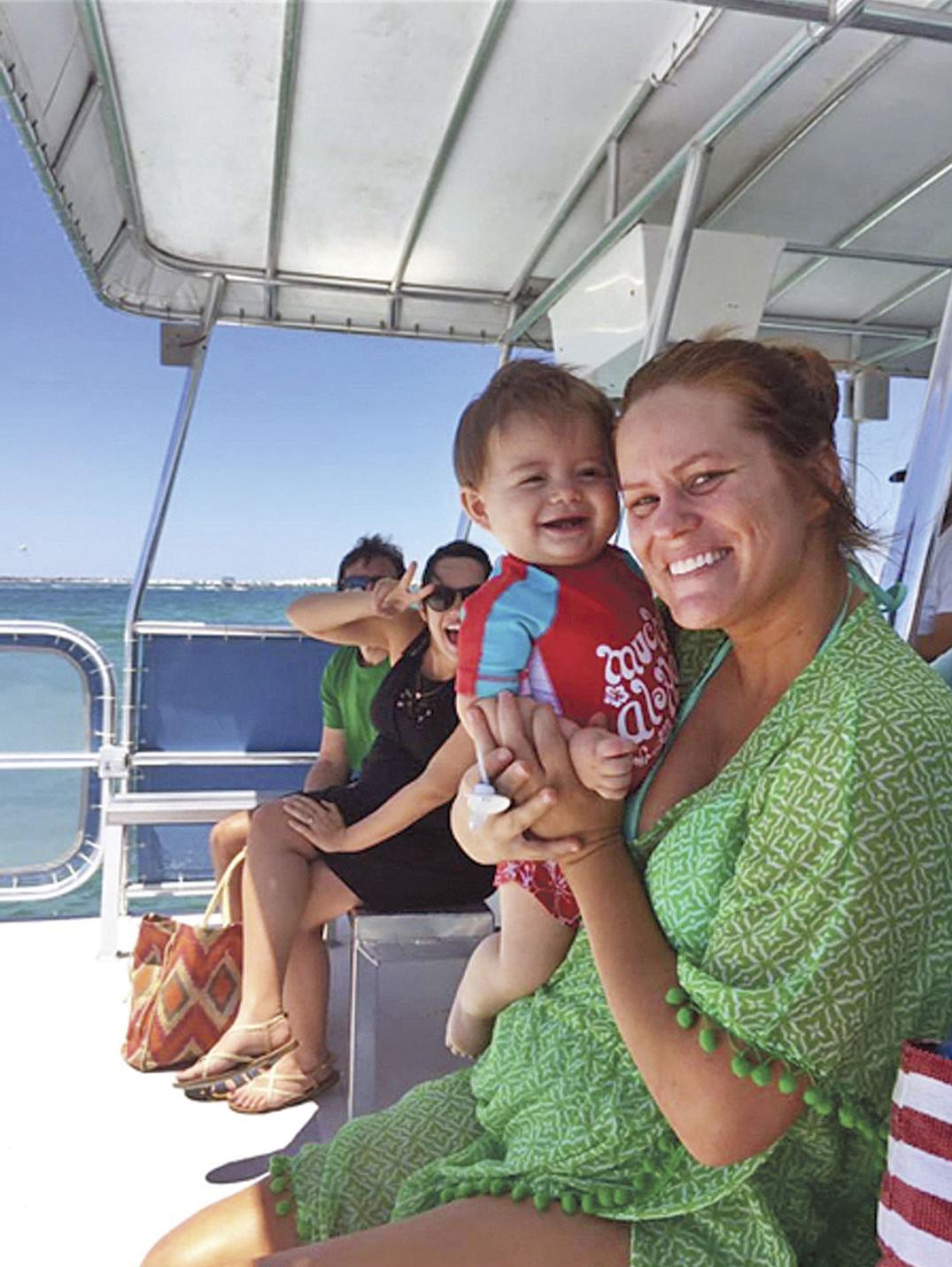 Andre Jolet Williams and her son, Greyson, are grinning ear to ear on a boat ride along the Red River in Natchitoches. 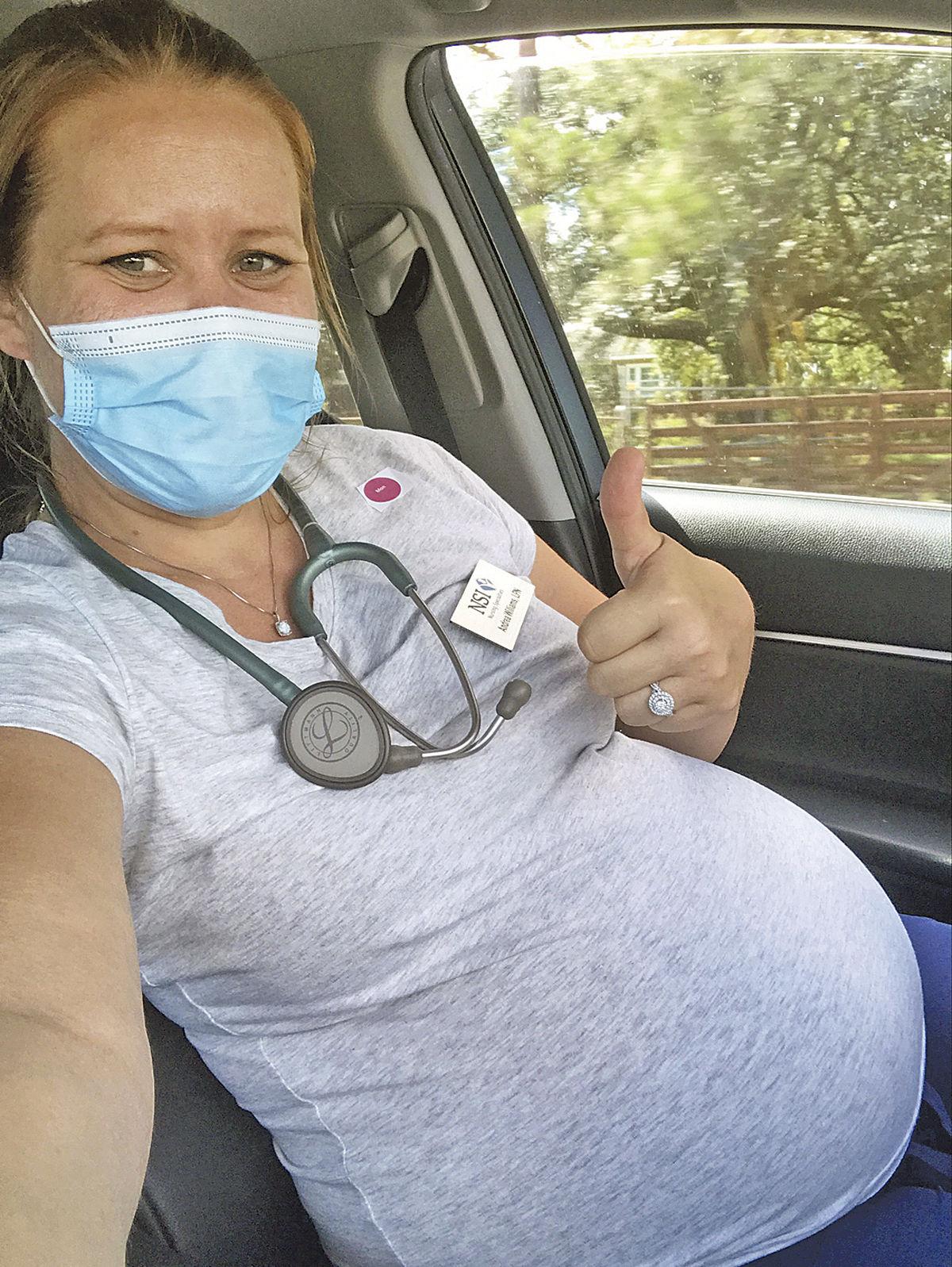 Andrea Williams, an LPN who is working as a home health nurse during  gives a thumbs up recently while sitting in a vehicle. The nursing veteran, who is 22 weeks pregnant with a due date in September, hasn’t stopped calling on patients in their homes. 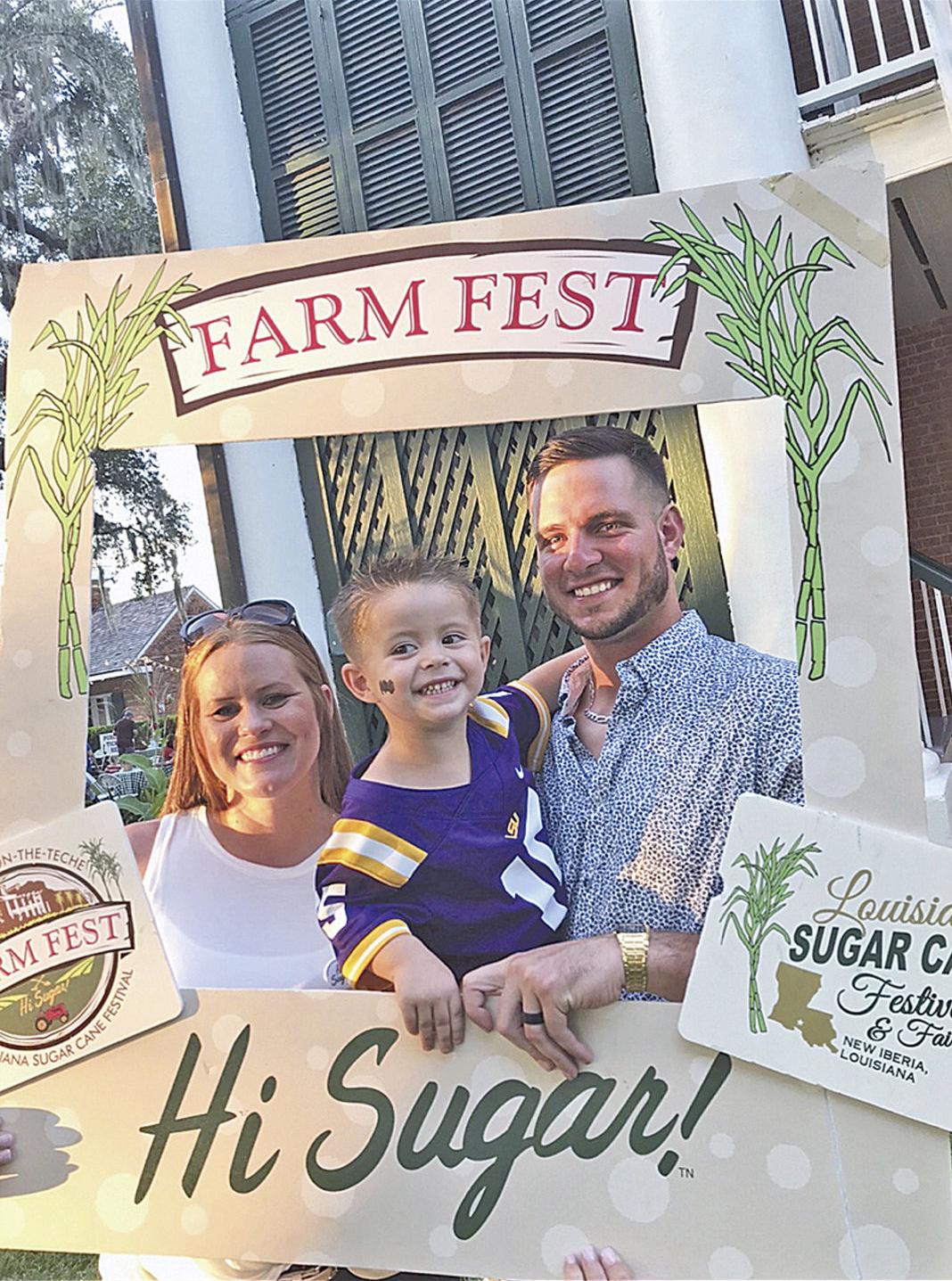 Smiles abound as the Williams family, from left, Andrea Jolet, Greyson and Landon, enjoy one of the area’s most popular events. 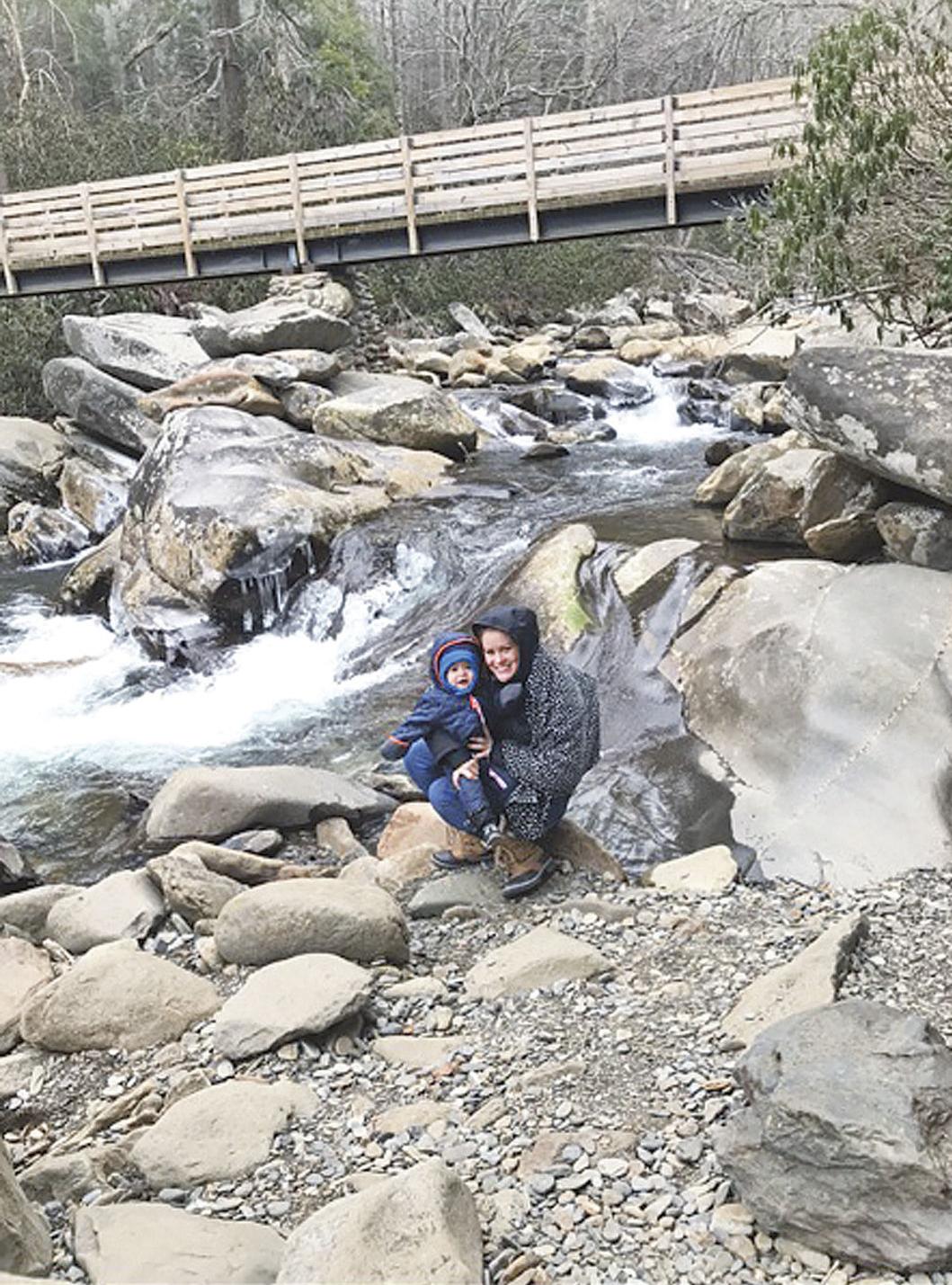 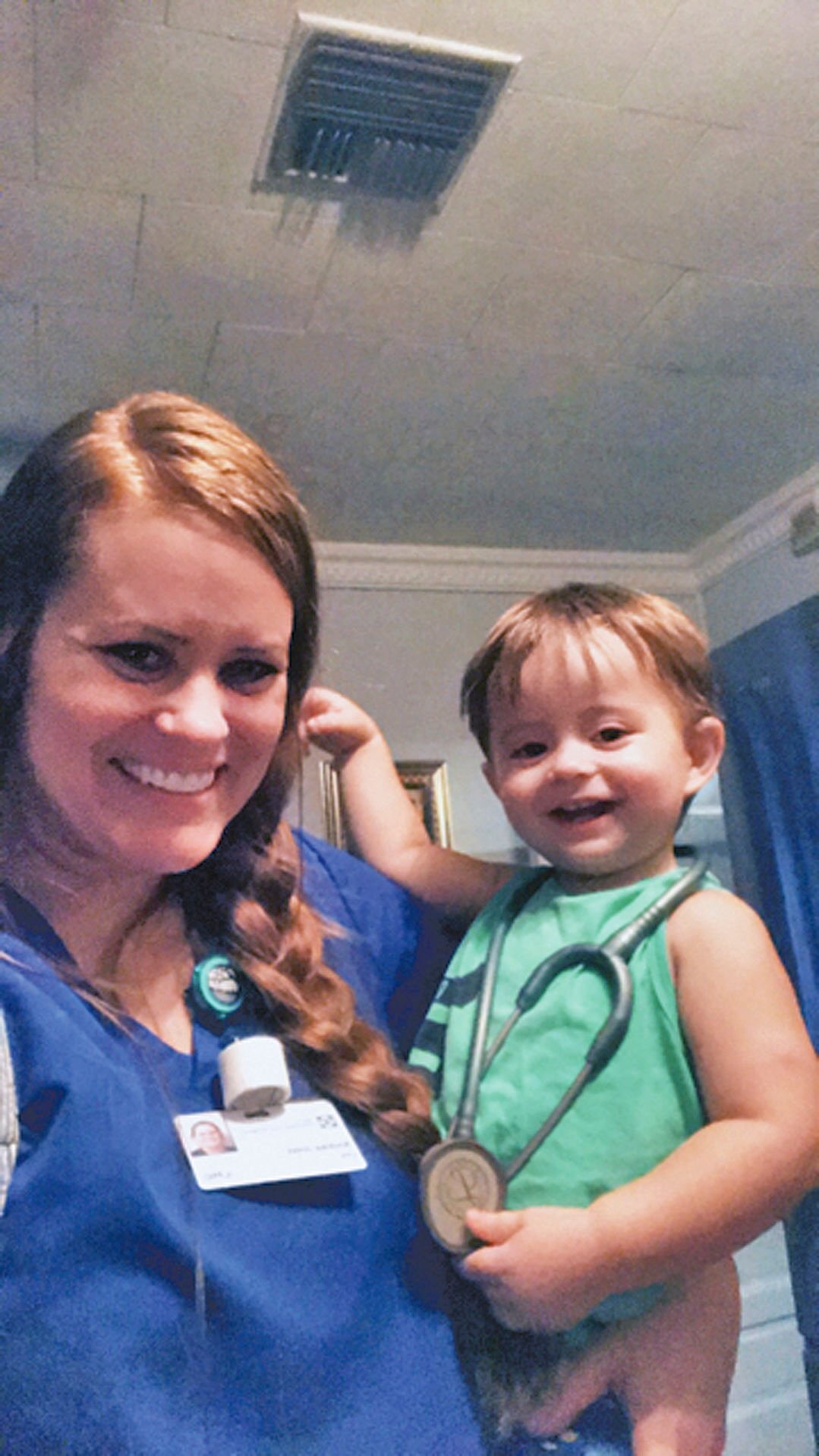 Andre Jolet Williams and her son, Greyson, are grinning ear to ear on a boat ride along the Red River in Natchitoches.

Andrea Williams, an LPN who is working as a home health nurse during  gives a thumbs up recently while sitting in a vehicle. The nursing veteran, who is 22 weeks pregnant with a due date in September, hasn’t stopped calling on patients in their homes.

Smiles abound as the Williams family, from left, Andrea Jolet, Greyson and Landon, enjoy one of the area’s most popular events.

There are no walls where Andrea Jolet Williams enjoys life the most as a wife, a mother with a baby due in September, a home health nurse and an outdoorswoman.

Getting outdoors is more challenging now, though, with family obligations and her workload as a home health nurse during the coronavirus pandemic. The 34-year-old LPN who sees 12-14 patients each 10-hour or so day milks the most out of daylight savings time and weekends to get outside the walls with her young son.

“I always like the outdoors. I don’t get to do it like I used to do it. Now I have a family. I have a child and one on the way. And a husband. Life’s a little different now,” Williams said this past week.

Williams realizes the world is in uncharted territory. That people are being forced to live in an unfamiliar existence is a constant reminder.

She hasn’t feared for herself working during COVID-19.

“Me, personally, I wasn’t scared I would get it. That I could bring it home to my little boy or husband, that was most scary. But by the grace of God it’s all been good. God provided the proper equipment to stay safe,” she said.

“Being pregnant really makes it hard. My husband wanted me to take a leave of absence. As everyone around here knows, the oil field (industry) is down” and he is working less, she said, which is why she continued working to help make ends meet.

Williams, who graduated from Westgate High (Class of 2003) married Landon Williams in December 2018. She was 22 weeks pregnant with Kate as of May 3 and is due the first week of September.

Her passion for the outdoors shows in photos of her and her son, Greyson, 4. There are pictures of her kayaking, jet skiing and holding a fish on the end of a fishing rod, and of mother and son in a boat, or sitting alongside a picturesque stream flowing across boulders, and many more.

The late Raymond Jolet Sr., who lived on Weeks Island and died in 2005, introduced her to the outdoors, she said, appreciatively. Her grandfather had a green thumb, always worked in his garden, and loved to fish.

“A lot of my childhood outdoor activities were with my grandpa, my dad’s dad,” she said, explaining that her father, Raymond Jolet, worked six- and seven-day weeks to support his wife and five children.

When Williams was younger, she was by her paternal grandfather’s side in the garden. She also fished from piers in Vermilion Bay with him until she got older and ventured out to fish and go shrimping with the elder Jolet.

“Those are the only vacations I remember as a kid were with them,” she said.

She enjoys fishing but the self-professed “animal person” has never been a hunter.

Williams is one of five children — two daughters and three sons — born to Ray and Claire Jolet of Lydia. Her older sister, Ashley Miguez, an elementary school teacher, is married to state Rep. Blake Miguez, a Republican from District 49.

“I’ve lived in New Iberia my whole life. A lot of people know me, of course, for having Blake as a brother-in-law. Our family’s really blessed to have him, that’s for sure,” she said.

Many other residents know her generosity, her charitable nature, her compassion for others. In so many words, she helps people.

“People who know me know I always help,” she said, noting she often goes shopping at the store for patients.

After graduating from Westgate High, she earned an associate degree in general studies at South Louisiana Community College. She entered the medical field, then enrolled at the University of Louisiana-Lafayette with the intention of becoming an educator.

“I probably had a year-and-a-half left when I decided to go into nursing. It’s something I always wanted to do,” she said, confiding the only thing holding her back was wondering if she could tolerate the sight of blood. She found out she could handle it.

Nursing, she soon discovered, is her calling.

Williams first worked for the LHC Group at Iberia Medical Center, then worked in the LHC Group rehab center at the former Dauterive Hospital. She now works for Nursing Specialties, also known as NSI.

“It’s a lot different than what I did in the hospital setting. I’m actually in the patient’s environment. I see how people live. It’s really sad sometimes,” she said, noting some people don’t have family.

“And let me tell you, this company shows so much appreciation to all their employees. My company provided top PPE gear — suits, masks and gloves. I always have the appropriate gear,” she said.

Alexis Duplantis Romero often thinks ahead to a few years from now when her toddler son and unborn baby, another boy, are old enough to hunt a…