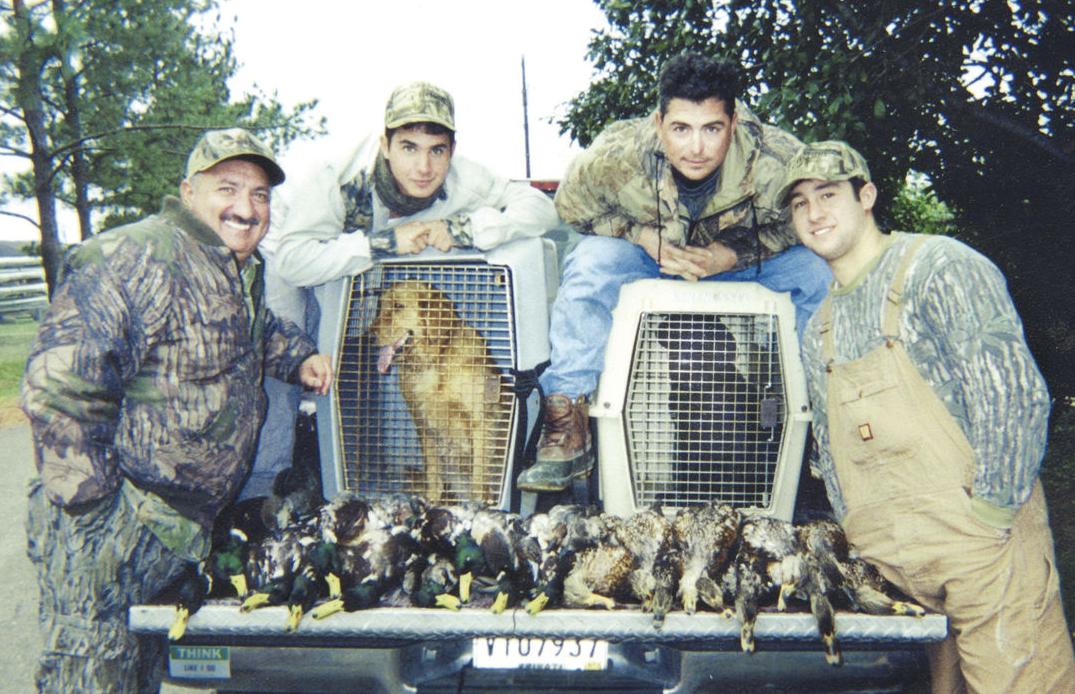 From left, Lenny Lipari, Mark Lipari, Bubba Judice and Michael Lipari pause for a photo of the mallards they killed the morning of Dec. 12, 1998, at the Wax Lake Outlet on the Atchafalaya Delta WMA. Mark and Bubba recalled that memorable duck hunt this past week. 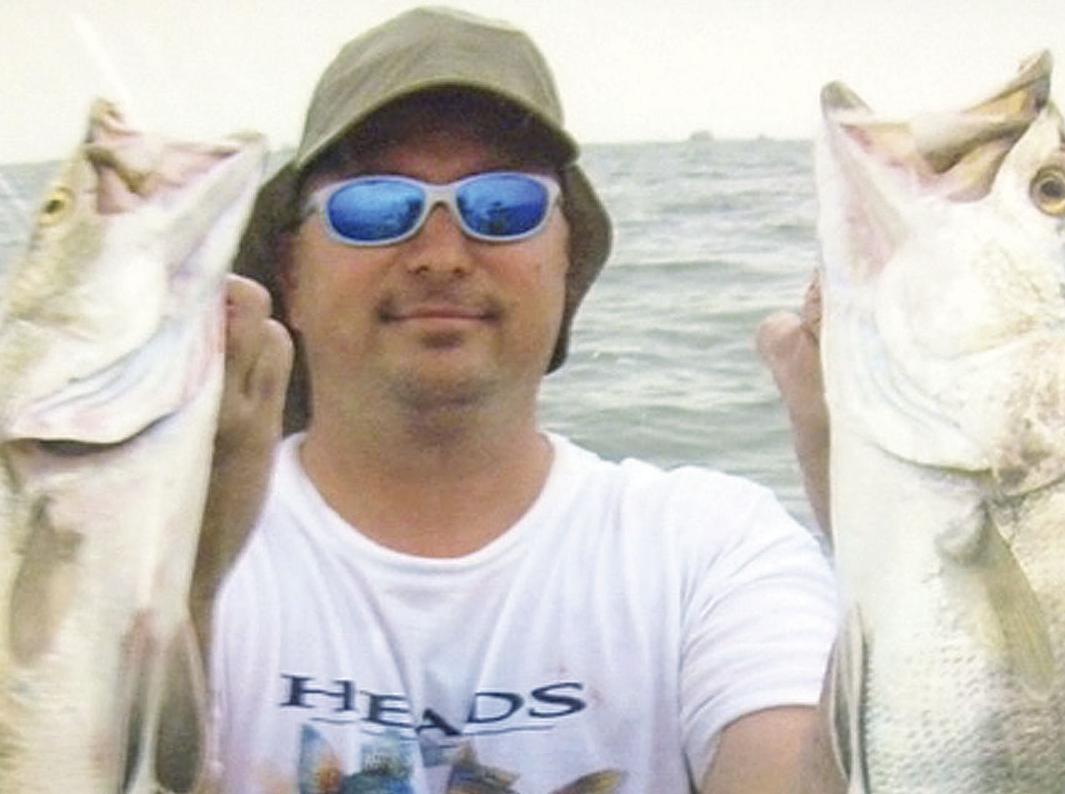 ABOVE: Bubba Judice of New Braunfels, Texas, formerly of New Iberia, holds two 8-pound class speckled trout he caught while fishing Bay Baffin below Corpus Christi, Texas. Since moving to Texas about 17 years ago, he does more deer hunting and fishing than he does duck hunting. 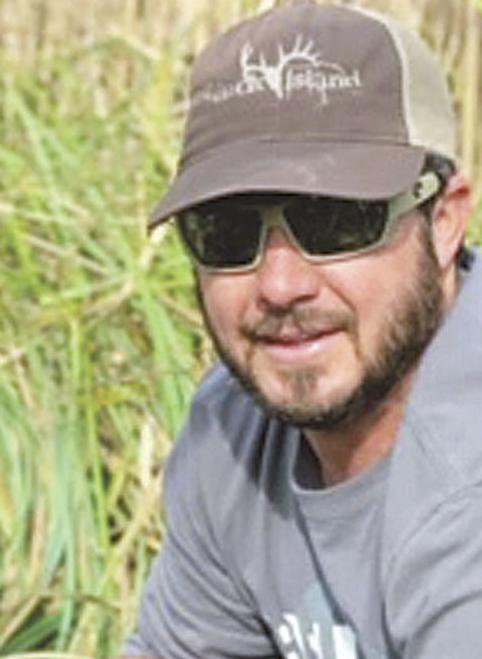 RIGHT: Mark Lipari of New Iberia, Bubba Judice’s longtime friend, hunts deer and wild pigs more than he goes duck hunting, like he did that Dec. 12, 1998, day with Judice.

From left, Lenny Lipari, Mark Lipari, Bubba Judice and Michael Lipari pause for a photo of the mallards they killed the morning of Dec. 12, 1998, at the Wax Lake Outlet on the Atchafalaya Delta WMA. Mark and Bubba recalled that memorable duck hunt this past week.

ABOVE: Bubba Judice of New Braunfels, Texas, formerly of New Iberia, holds two 8-pound class speckled trout he caught while fishing Bay Baffin below Corpus Christi, Texas. Since moving to Texas about 17 years ago, he does more deer hunting and fishing than he does duck hunting.

RIGHT: Mark Lipari of New Iberia, Bubba Judice’s longtime friend, hunts deer and wild pigs more than he goes duck hunting, like he did that Dec. 12, 1998, day with Judice.

Two longtime friends and lifelong outdoorsmen separated by approximately 411 miles each fielded cell phone calls this past week about a photo from Dec. 12, 1998.

The color picture of four New Iberians, two flanking the bed of a pickup truck full of 20 mallards and two inside the pickup truck’s bed, each leaning over a dog kennel, tells a thousand words. It’s the story of the rise of duck hunting at the end of the Wax Lake Outlet on the Atchafalaya Delta Wildlife Management Area, a popular destination for waterfowl and waterfowl hunters for several decades.

Bubba Judice, who now lives in New Braunfels, Texas, and Mark Lipari of New Iberia, were the recipients of the call out of the blue as well as being the young outdoorsmen behind the retrievers. They were eager to talk about that day, the first day of the second split 22 years ago. Judice was 29 and Lipari was 22.

“I do remember that day. I think we had a couple days in a row like that. But that particular day was opening day of the second split,” Judice said Monday.

“Funny thing about that weekend. We knew, however many people we took and have gone with us, we were coming back with a limit. Four of us.”

“That day was a pretty good day. I’d say that was one of our best hunts. The whole period was a really good time to be hunting down there. We were some of the fortunate ones to be able to experience that down there. It doesn’t really happen like that anymore,” Lipari said Thursday.

The day before that memorable duck hunt, Judice and Lipari went on a mission at the mouth of the Wax Lake Outlet, like they had done many times before. The purpose was to locate the position ducks at the time.

“Yep. We went the day before and we scouted,” Lipari said.

They found the mother lode, according to Judice, whose voice still reaches a higher, excited pitch at the memory.

“Mark and I went out to scout. Man, there were rafts of mallards out in the Gulf. It’s fascinating to me those birds rafted up in the Gulf of Mexico, by the hundreds,” he said.

The next morning, under the cover of darkness, the four duck hunters arrived at their makeshift duck blind and waited with shotguns at the ready for the mallards to fly in for breakfast. None were disappointed.

The air was full of so many ducks the duck hunters could pick and choose. And they specifically chose the big, beautiful mallards and let the others walk, er, fly by to live another day.

“That’s all we shot that morning. We passed on widgeon, pintail, canvasback” and other ducks, Lipari said. “There was a steady stream of mallards. They’d go into the fingers and feed.”

Between November and January back then, those duck hunting trips became a ritual.

The Liparis, Judice and guests hunted there so frequently they had their own names for the hotspots.

“Yep, that’s right. There’s a place at the Wax, a little finger out there we called Forked Island. Another one was Pintail Pass. One was Widgeon Island,” Judice said.

Their duck blind even had a name, Lipari said.

“Our blind was actually called the Slaughterhouse. That six-year span from 1994 to 2000, we banged ’em pretty good in that period,” he said.

They hunted ducks those days from one of two duck blinds on the Atchafalaya Delta WMA, he said, emphasizing the structures couldn’t be permanent, no nails, steel, etc., and had to be 100 percent natural on the WMA in St. Mary Parish. The duck hunters left the duck blind making to Judice, Lipari said, appreciatively.

“Bubba got pretty crafty with our blinds. Bubba was definitely the engineer for all of them. We all had our job to do,” Lipari said.

Judice modestly didn’t accept all the credit for the duck blinds.

“We’d just build a blind out of cane. On the way out we’d cut brush, load it in the boat” and brush the duck blinds, he said.

“It was pretty labor intensive but the rewards were when you have days like that,” he said.

Plus, Judice added with a chuckle, “We were younger back then. We were bulletproof. You do what you have to do.”

“I’m telling you, we had many days like that. But it took a special guy to do that. When you hit it right, it was unbelievable,” he said, noting the duck hunter would have to want to get out there in any conditions and scout.

“It’s not an easy hunt,” he said, citing high winds that churn the water and make passage extremely rough.

Getting to their duck hunting destination required navigating at night, which made the trip a challenging one before arriving at the site in the outreaches of the delta.

“The boat ride out there at night (in the predawn darkness) was scary,” Judice said. “I had a buddy who hunted at the Wax. He lost his boat (on a duck hunt gone wrong) that year. It can be really dangerous out there.

“I remember the worst part of it was the boat ride and the walk. We’d anchor at the end of a sandbar and would walk out a couple hundred yards and put out decoys. The water levels varied every day out there,” he said.

Ah, the decoys. They were numerous and served their purpose well.

Lipari said, “We’d show up with a BIG decoy spread. If we showed up with four, five or six hunters, we had a decoy bag for each hunter — two dozen in each bag.”

That conditions can be treacherous was evident in the fact the retrievers wore life jackets, Lipari said.

“At least they’d have a little support coming back,” he said.

On that day to remember, Judice almost lost his retriever, Reba. A downed duck went in the water and a hard tide was carrying it away.

Judice acted as quickly as possible. His retriever was determined to come back with the duck.

“Reba took off after the bird. She got caught up in the current. She would not let up. She would not stop. I had to actually go get the boat and go around a sandbar (to make the rescue). Of course, we never got the duck. I was just concerned about the dog,” he said.

Judice, who moved to New Braunfels about 17 years ago, gave Reba to his sister before he left. Reba, he said, died “probably five years ago.”

He hasn’t forgotten the superb duck hunting or his buddies since he left the Sportsman’s Paradise.

“Those two days probably were the two best hunts I had in my life in Louisiana. (But) I had better in North Dakota,” Judice said, remembering one out-of-state hunt in particular during the four-year period he worked in the oil field in The Peace Garden State.

That other great day was five or six years ago in a dry barley field, a veritable agricultural buffet for mallards that gorged themselves, he said.

“I had a couple thousand mallards that just funneled down. I unloaded my gun and had a limit in 10 seconds. When those birds hit the ground they just busted open they were so full of seed,” he said.

Special times at the Wax

The Louisiana duck hunts were special.

“When I think back on those days, then it was really about enjoying Louisiana outdoors and spending some good times with great friends. Those memories will never disappear no matter how far I live away from South Louisiana,” Judice said.

Lipari longs for those days, too.

“I wish my kids and the younger generation could experience the duck hunting we had back then,” he said.

There is no doubt for Lipari and Judice those days were the heyday for consistently successful waterfowl hunting at the mouth of the Wax Lake Outlet.  It has had its good days the past several seasons but based on many reports it doesn’t come close to the 1980s, 1990s and early 2000s, a development underscored by the fact many Teche Area duck hunters who once hunted there religiously don’t bother any longer.

“I don’t know what happened. I guess they (the ducks) stop north of here. But those were really good times,” Judice said.