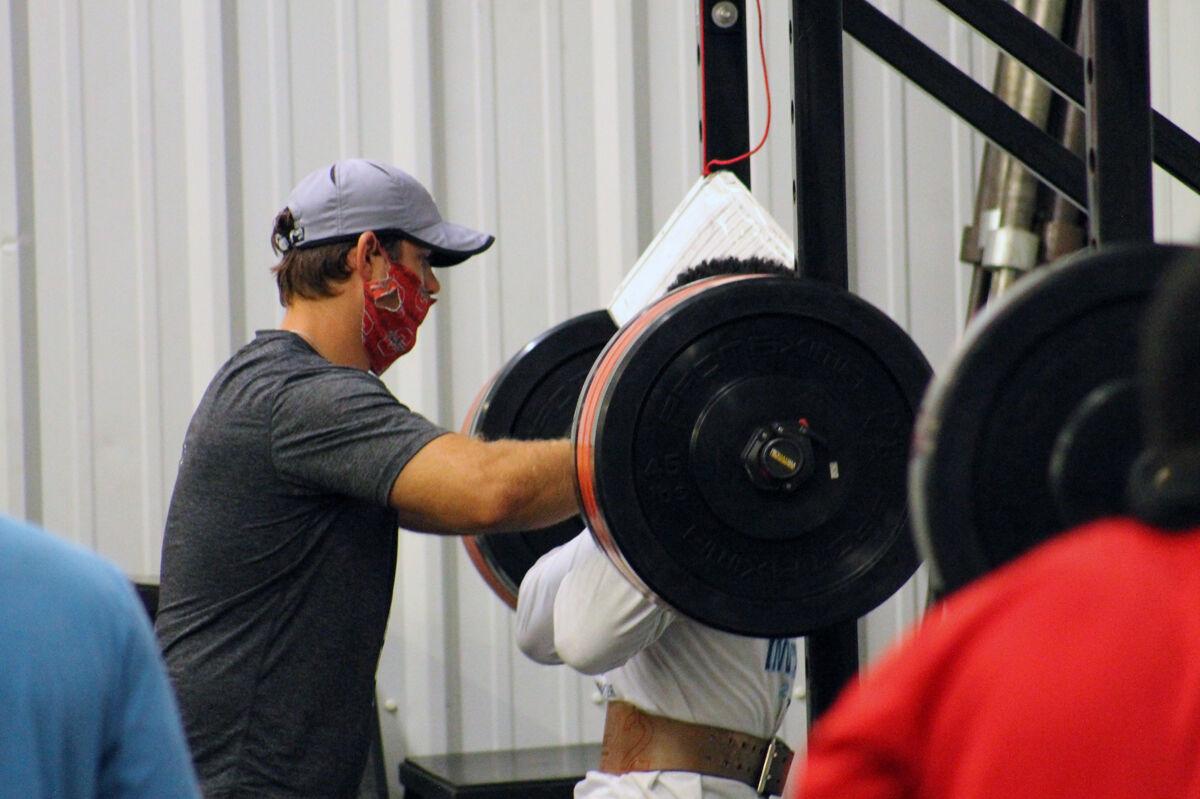 First-year Catholic High head football coach Scott Wattigny spots for a player doing squats during weight training Tuesday morning at CHS. Wattigny, who coached Archbishop Hannan to a 39-27 record over the past five seasons, said that even the interruption of the coronavirus pandemic this spring couldn’t dampen the enthusiasm he feels for his new job. 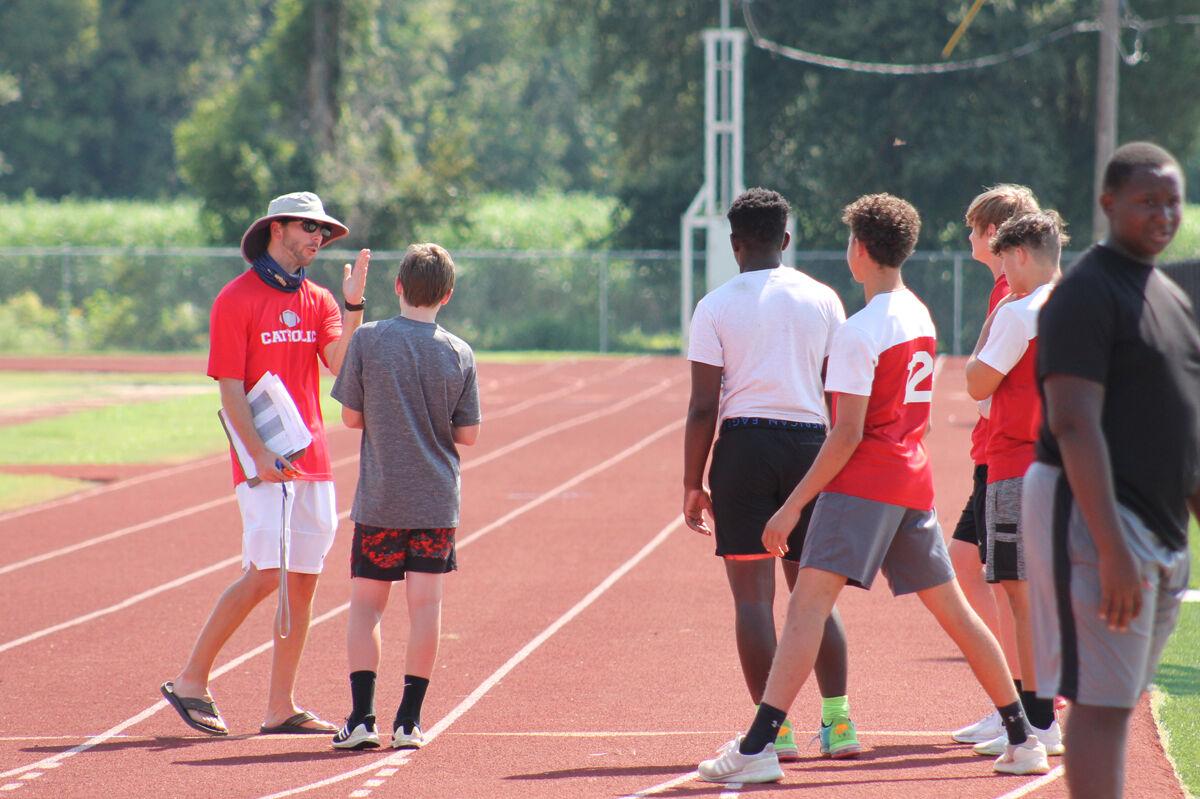 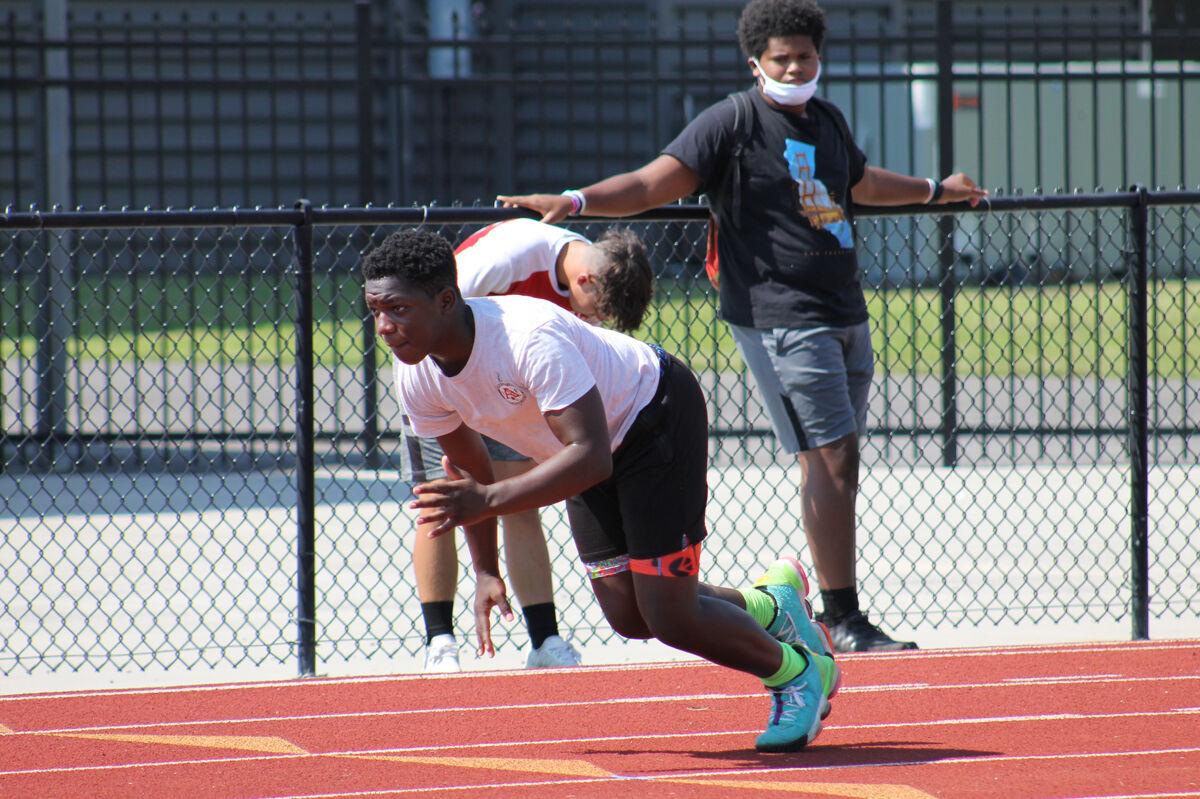 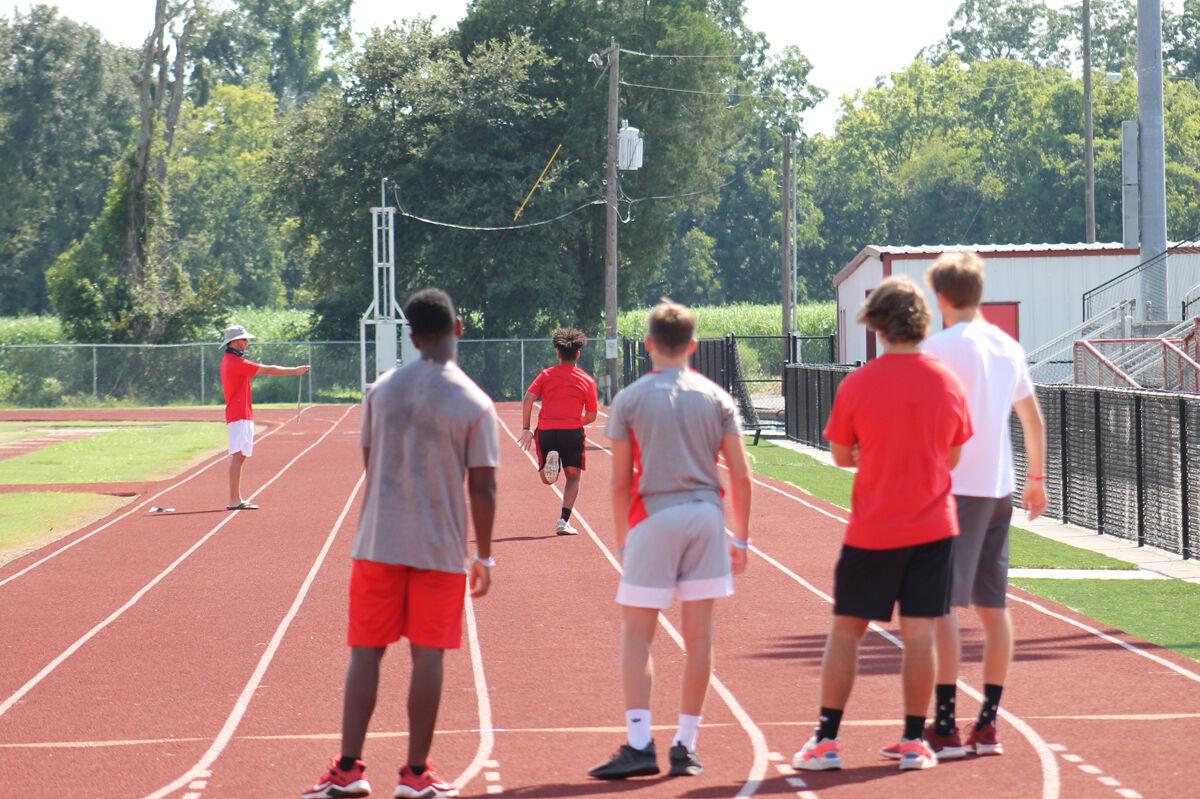 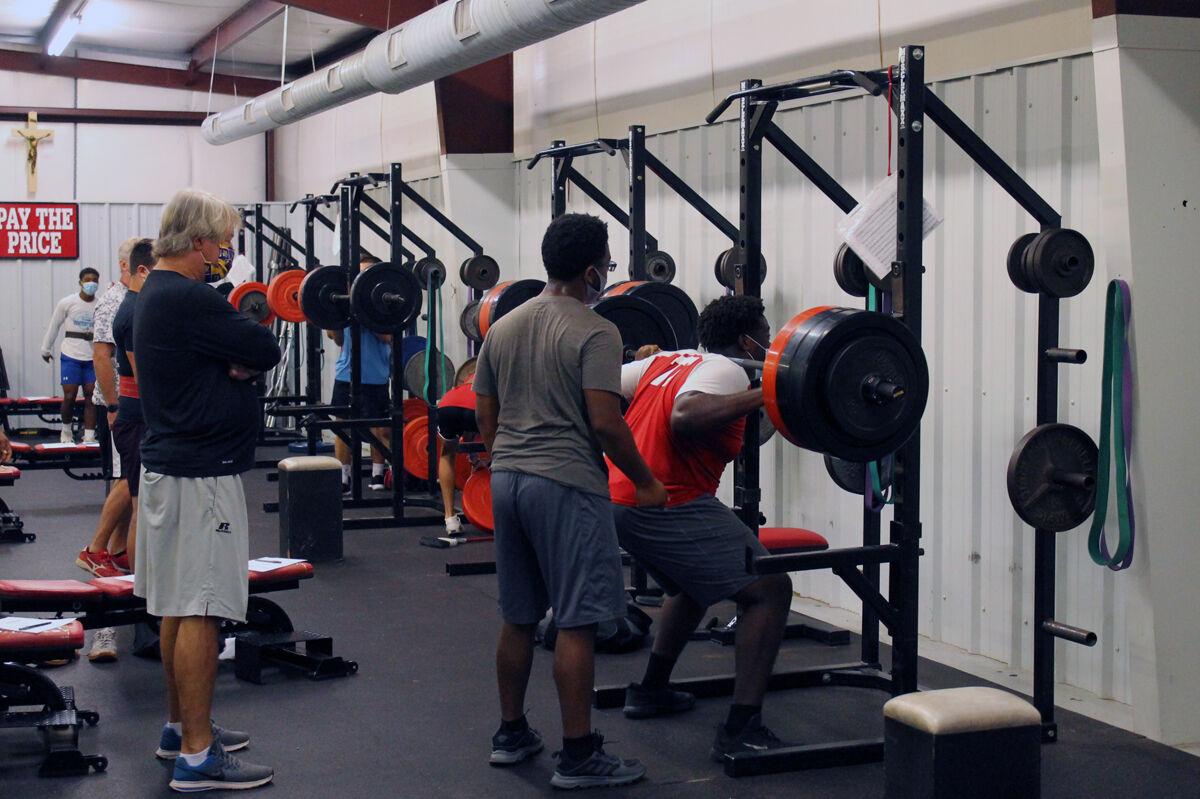 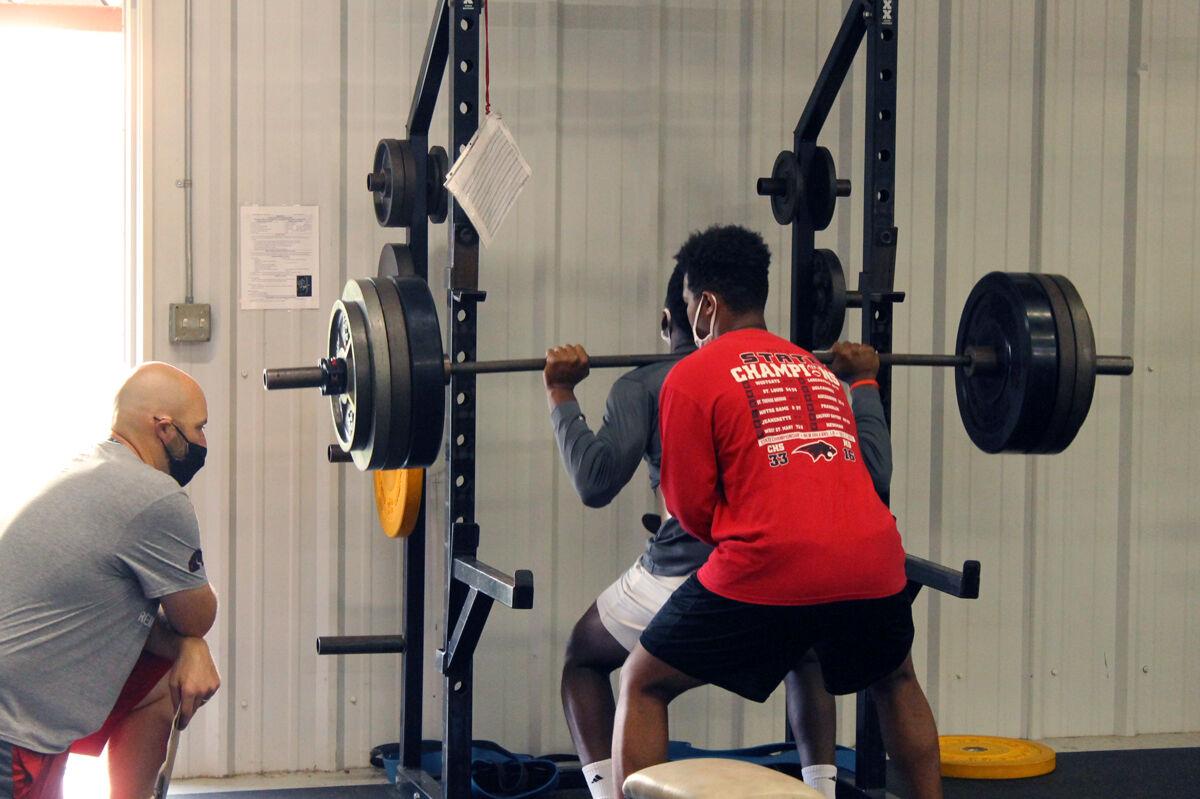 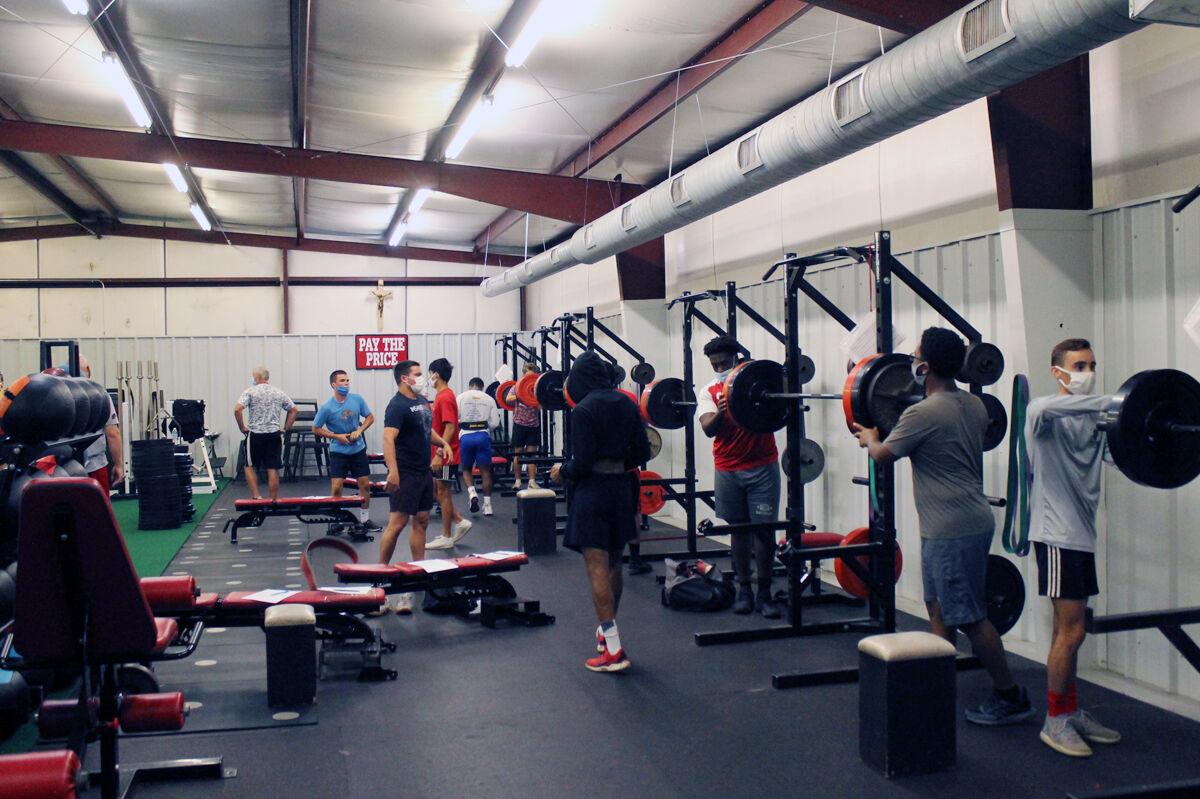 Players prepare to do squats during a weight session Tuesday morning at Catholic High. 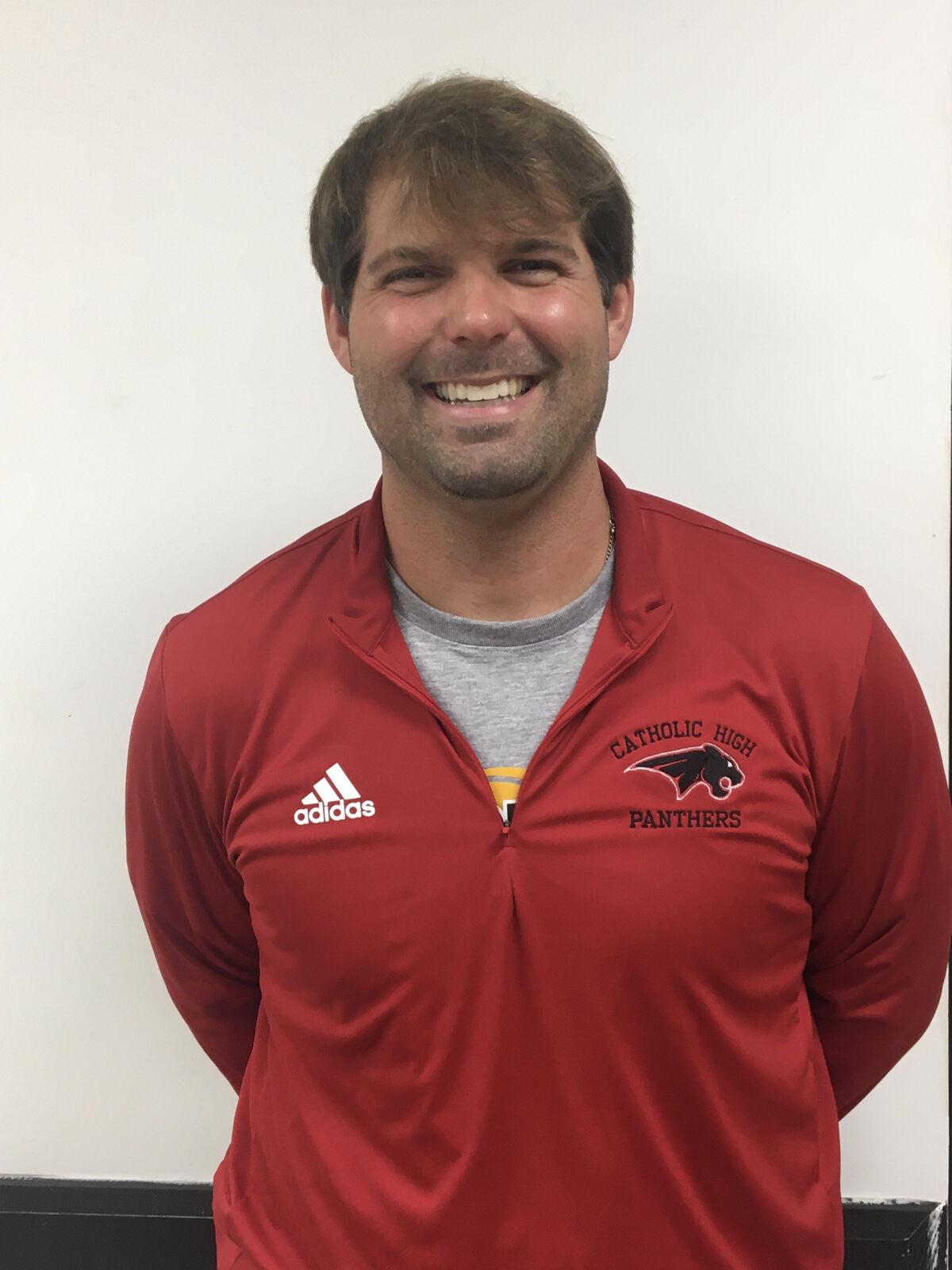 First-year Catholic High head football coach Scott Wattigny spots for a player doing squats during weight training Tuesday morning at CHS. Wattigny, who coached Archbishop Hannan to a 39-27 record over the past five seasons, said that even the interruption of the coronavirus pandemic this spring couldn’t dampen the enthusiasm he feels for his new job.

Players prepare to do squats during a weight session Tuesday morning at Catholic High.

The coronavirus pandemic altered the plans Scott Wattigny had made after he was hired as head football coach and athletic director at Catholic High, but nothing could dampen his enthusiasm.

“I got hired in late January,” Wattigny said. “Not a month later, coronavirus hit. The plan, initially, was that I would be here every Friday.

“I was still going to work at (Archbishop) Hannan (in Covington) for four days each week. Hannan and Catholic High worked that out, and that was great.”

After only two weeks, however, the 32-year-old New Orleans native was limited to virtual interaction with his new team.

“I was with the team through Google Classroom, which is one of those great resources we have,” he said.

This week, the Panthers began practicing for the upcoming season. If the season kicks off as scheduled, Wattigny will see a familiar foe in Vermilion Catholic in Week 1.

“VC/Catholic High was also the first game when I was at VC as a coach. I got to see this place from afar, and I knew this place was special.”

As he got a closer look at CHS, Wattigny became more impressed.

“I love it,” he said. “As I went through the interview process, it was apparent that this place is a gold mine. I don’t know how many places have 76 acres of land, lights on soccer goalposts or multiple gyms.

“We’re in a really good situation. We have a great administration that supports athletics and also places academics first. It was an easy ‘yes’ for me. My wife is from New Iberia. We lived in New Iberia when I was at VC and fell in love with the town.”

“He’s our bellcow,” the CHS coach said. “KK is our quarterback. We also have some packages where we’re going to use his skill set on the perimeter and at running back.

“The goal would be to get him in defensive packages as well, but that’s not a primary concern because he’s going to have to operate the ship for us.”

The CHS roster has swelled considerably from last year, which will help Wattigny keep his players fresh.

“We’re up to 82 players and that will allow us to specialize,” he said. “I’m big on kids being able to master one position. We have some two-way players, but I’d like to limit that.

“We also have six guys who are coming over from the baseball team. That creates depth and competition, which is always good for your football team. We’re two and three deep with guys who can play.”

The Panthers will retain much of former head coach Brent Indest’s Wing-T offense while adding some new wrinkles.

“The Wing-T is still a part of our offense,” Wattigny said. “I’m also a firm believer in the flexbone and the triple option, and KK fits that mold.”

The 6-0, 193-pound Reno, who played free safety and wingback last year, could become a big-time recruit in the near future.

“KK has a lot of interest,” Wattigny said. “Every college sees him differently. I would say most people like him on offense, but there are a lot of colleges that see him as a defensive player.

“Some coaches say, ‘I don’t know … he can do it all.’ He can do it on both (sides of the ball). He can definitely play in space and do a lot of things athletically, but there is a concern about speed.”

According to Wattigny, that concern could be alleviated soon.

“My personal opinion is that KK is the most underrated (junior) in the state,” Wattigny said. “Track would have helped him significantly because if he had a true time to show how fast he is, I think he’d have 15 offers.

“If he goes to VC and scores four touchdowns, I think 10 offers are going to happen the following week.”

Wattigny is also expecting big things from junior Shea Lee, who could become a highly sought-after defensive back recruit.

Another player to watch is senior Trace Williams, an explosive guard who is coming over from the school’s basketball team.