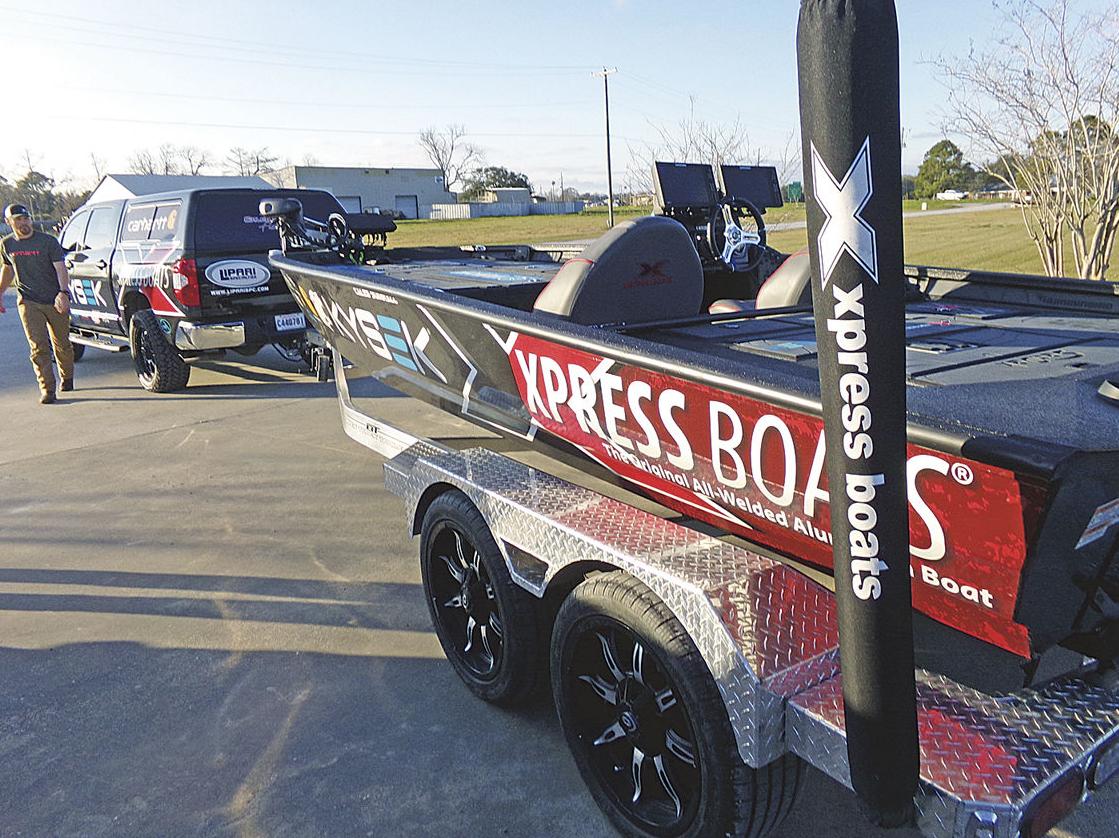 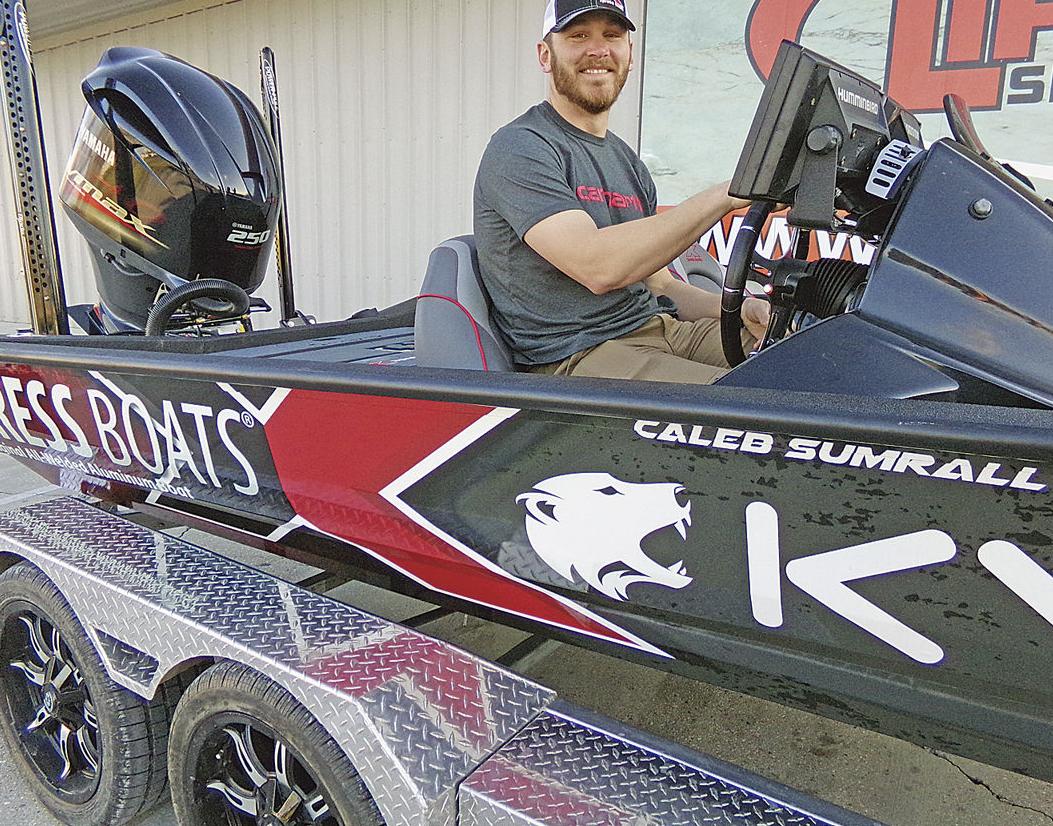 Sumrall sits in the driver’s seat before leaving Lipari’s. 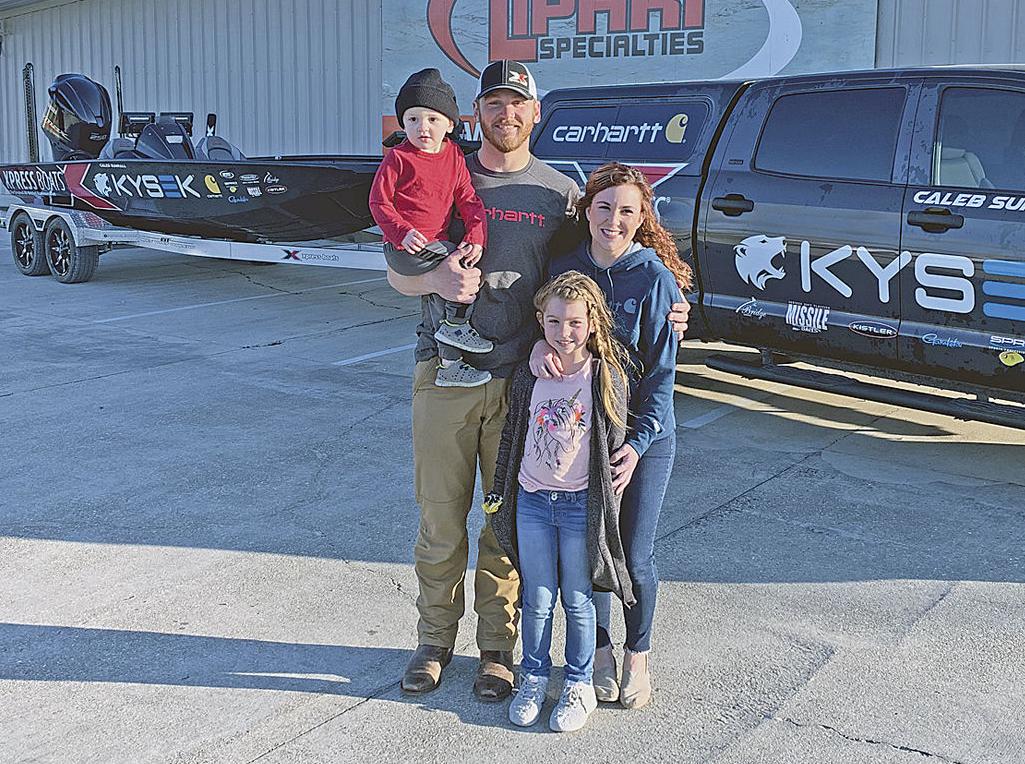 Caleb Sumrall holds his son, Axel, 2, and his wife, Jacie, with Clélié, 8, Friday afternoon at Lipari Specialties. Sumrall’s new Xpress X21 aluminum bass boat and his black Toyota Tundra pickup truck were wrapped for the Bassmaster Elite Series pro to match each other over the past two weeks at Lipari Specialties.

Sumrall sits in the driver’s seat before leaving Lipari’s.

Caleb Sumrall holds his son, Axel, 2, and his wife, Jacie, with Clélié, 8, Friday afternoon at Lipari Specialties. Sumrall’s new Xpress X21 aluminum bass boat and his black Toyota Tundra pickup truck were wrapped for the Bassmaster Elite Series pro to match each other over the past two weeks at Lipari Specialties.

New Iberian Caleb Sumrall is healthier and fit, for sure; hungrier, based on his burning desire to win, and heartened by beaucoup experience and confidence gained last year as the clock ticks down to start the Bassmaster Elite Series tour in 2020.

The third-year bass pro trained for the rigors of fishing countless hours in practice, then standing up to the demands of bass tournament fishing, with a running regime that started in July and intensified during the offseason November through January.

“I wanted to be in the best possible shape I could be in for this year, control what I can control,” Sumrall said Tuesday morning as he drove to Jackson, Mississippi, for the Farris Brothers Sports Show. He was representing one of his sponsors, Missile Baits.

He feels better physically, he said, after running 25-30 miles a week.

“Absolutely,” he said, adding the miles logged with his legs will help his endurance that is stretched to the limit after many hours on the road to destinations across the country, then prefishing before each tournament.

Sumrall, 32, has his eyes on several goals. Earlier this winter, he said finishing in the Top 10 in the Angler of the Year race was a priority in 2020.

Sumrall added another lofty goal this past week.

“I’d like to win one, to be honest. Of course, the minimum one is to make the Classic again,” he said.

Qualifying for the 50th annual Bassmaster Classic was his driving force in 2019. He did that, comfortably, by finishing 21st in the AOY to earn a trip to Lake Guntersville for the world championship of bass fishing March 6-8 in Alabama.

Lake Guntersville was the site of his highest finish as a pro bass angler. He finished fourth with 77 pounds, 10 ounces, and won $15,000 in mid-June 2019 for his first-ever Top 10 finish as an Elite.

However, Sumrall said he isn’t thinking about the Classic the last week of January.

“I’m trying to make it through the first two,” he said, matter-of-factly.

After St. Johns, Sumrall and the Elites travel to fish the following week at Chickamauga Lake out of Dayton, Tennessee. That second stop is scheduled Feb. 14-17.

Sumrall said he has researched Chickamauga Lake. He knows it’s a Tennessee River fishery,  there’s a chance it could be cold and that staging fish, big bass at that, probably will be a deciding factor.

“There’s a chance for it to be a big fish tournament,” he said.

As of Tuesday, Sumrall still had to load fishing rods and tackle, plus other necessities, into the Xpress X21. He expected to do most of that Friday.

He’ll take about 40 rod and reel combinations with him to Florida. He’ll carry about 25 combos in the boat and the rest will be locked up in the Toyota Tundra, he said.

As for respooling monofilament, fluorocarbon and braided line on the appropriate fishing reels, he has been doing a little at a time, he said, and still has some more to do before he heads east to start the season.

The New Iberia outdoorsman will join a full field of 88 anglers who will fish the first two days, with only the Top 40 making it to Saturday’s semifinal round. The Top 10 anglers that day advance to Championship Sunday and the chance to win the $100,000 first-place prize.

Daily takeoffs are scheduled to start at 6:15 a.m. from the Palatka City Dock and Boat Ramp. Weigh-ins start at 2:15 p.m. each day at Palatka Riverfront Park.

He has enjoyed spending more time with his wife, Jacie, and their children, Clélié and Axel. He also got in some hunting for deer ducks.

Sumrall undoubtedly wants to reverse what happened last year in the Elites’ first stop of the regular season at St. Johns River. He finished 72nd in the 75-angler field with 11 pounds, 8 ounces. It wasn’t the way he wanted to start his second year on the prestigious tour.

“I just kind of missed the deal. I was more disappointed than anything,” he said.

He’s going to prefish for the opener there, again, like he prefishes for every tournament.

“Something I normally do is look at as much fishing area as I can see. I try to look at the entire fishery,” he said.

What he fishes with and when hinges on what the bass are doing when he gets there, he said, adding, “It’s hard to say. It all depends on if the fish are spawning. With a little warming trend they might start. I’m sure they will be spawning somewhere.”

The St. Johns River isn’t anything like the marsh around here, or Lake Dauterive-Fausse or, even, the Atchafalaya Basin, he said.

The St. Johns River is Florida’s longest and only north-flowing river. Its 310-mile course starts in the marshy headwaters in Lower Indian River County to its Atlantic Ocean exit through the Mayport Inlet at Jacksonville. Along the way it’s fed mostly by storm water and natural springs, plus it has a tidal influence, which is most evident in Lake George, a 72-square-mile lake and most commonly fished pool south of the tournament’s takeoff and weigh-in site, and in nearby Crescent Lake.

Even the St. Johns River’s clear water is deceptive. Derek Hudnall, an Elite from Baton Rouge, recently confided to a local outdoor writer that the water is tannic, dark, and that makes it difficult to see bedding bass. Still, Hudnall hooked and boated an 8-pounder last year in the opener at St. Johns. He found it the day before during the tournament and went to the spot right off the bat and on his first cast caught the “hawg” on a Texas-rigged june bug Missile Baits The 48, a Senko-style soft plastic. The bedding bass was hanging around weed clumps, he said.

Sumrall is one of seven bass pros from Louisiana on the Bassmaster Elite Series. The others are Quentin Cappo of Prairieville; Tyler Carriere of Youngsville; Hudnall; Robbie Latuso of Gonzales; Brett Preuett of Monroe, and Tyler Rivet of Raceland.

Arguably, Sumrall may have the most community support. Nearly 60 outdoorsmen, young and old, attended a fundraising supper Jan. 22 at Phil Haney’s home in rural Iberia Parish.

“Like I say, I can’t do it without that event. It helps so much. To see the community come together and help out, that really helps a lot,” he said. “I’m really just happy to represent New Iberia and make some people proud.”