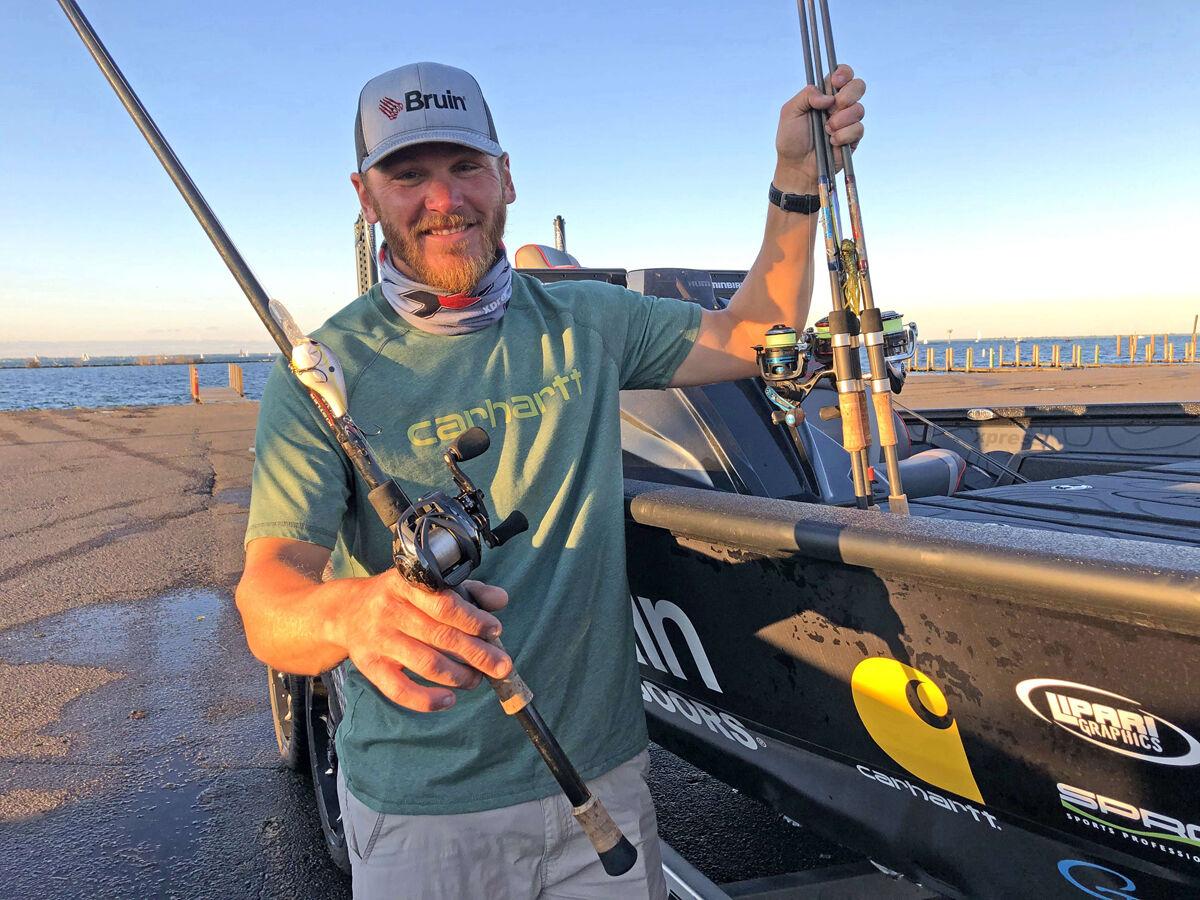 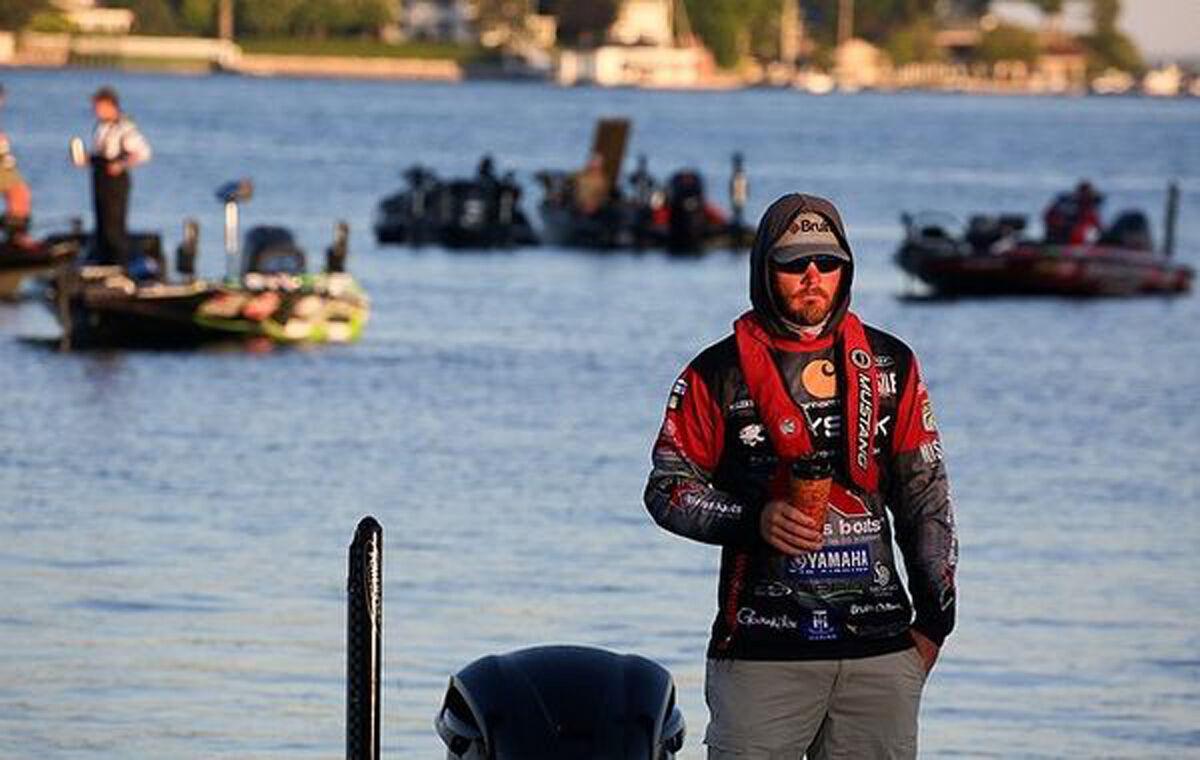 Caleb Sumrall contemplates the day ahead at a recent Bassmaster Elite Series tournament. 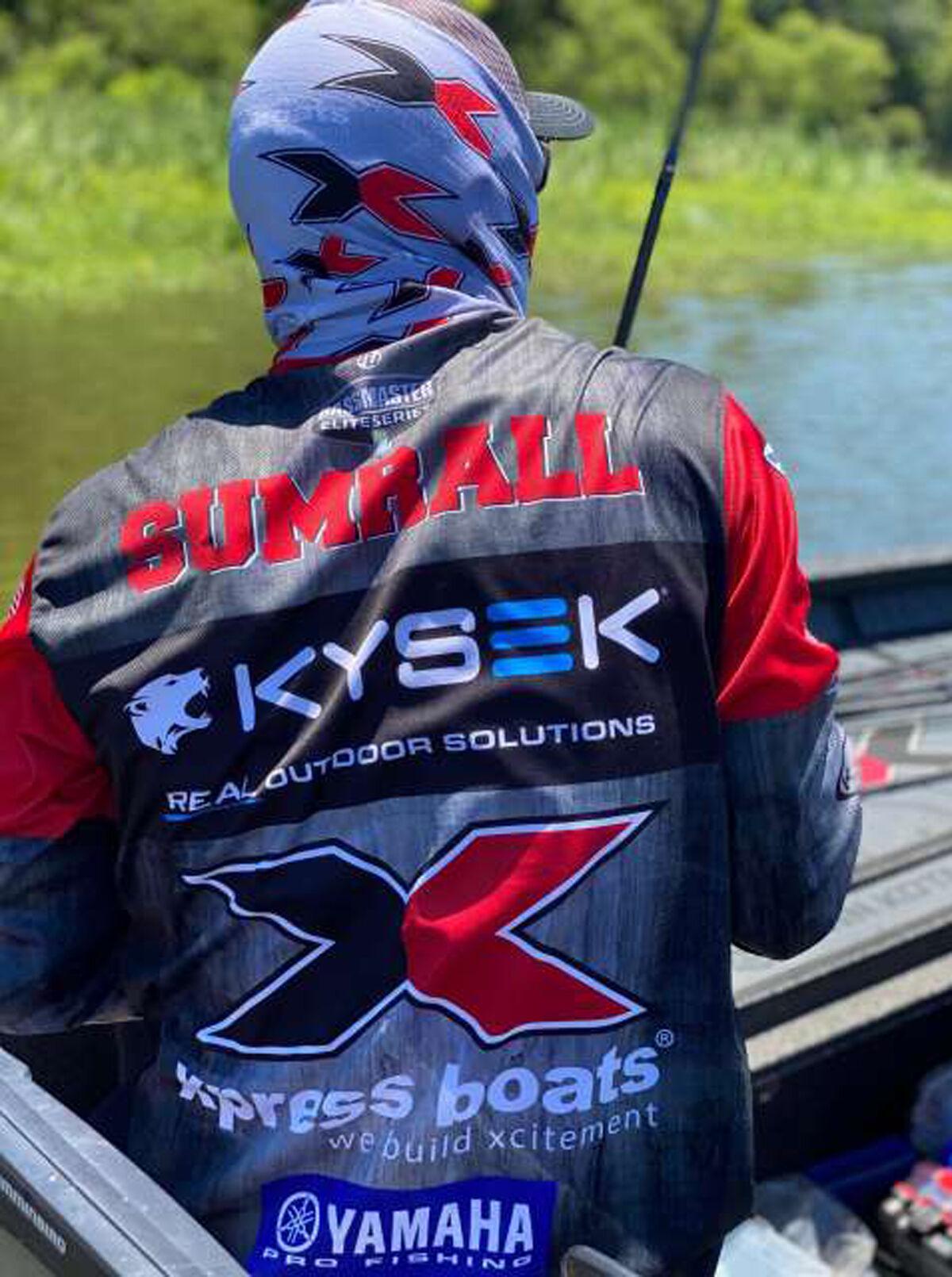 Caleb Sumrall is angling for another berth in the Bassmaster Classic. 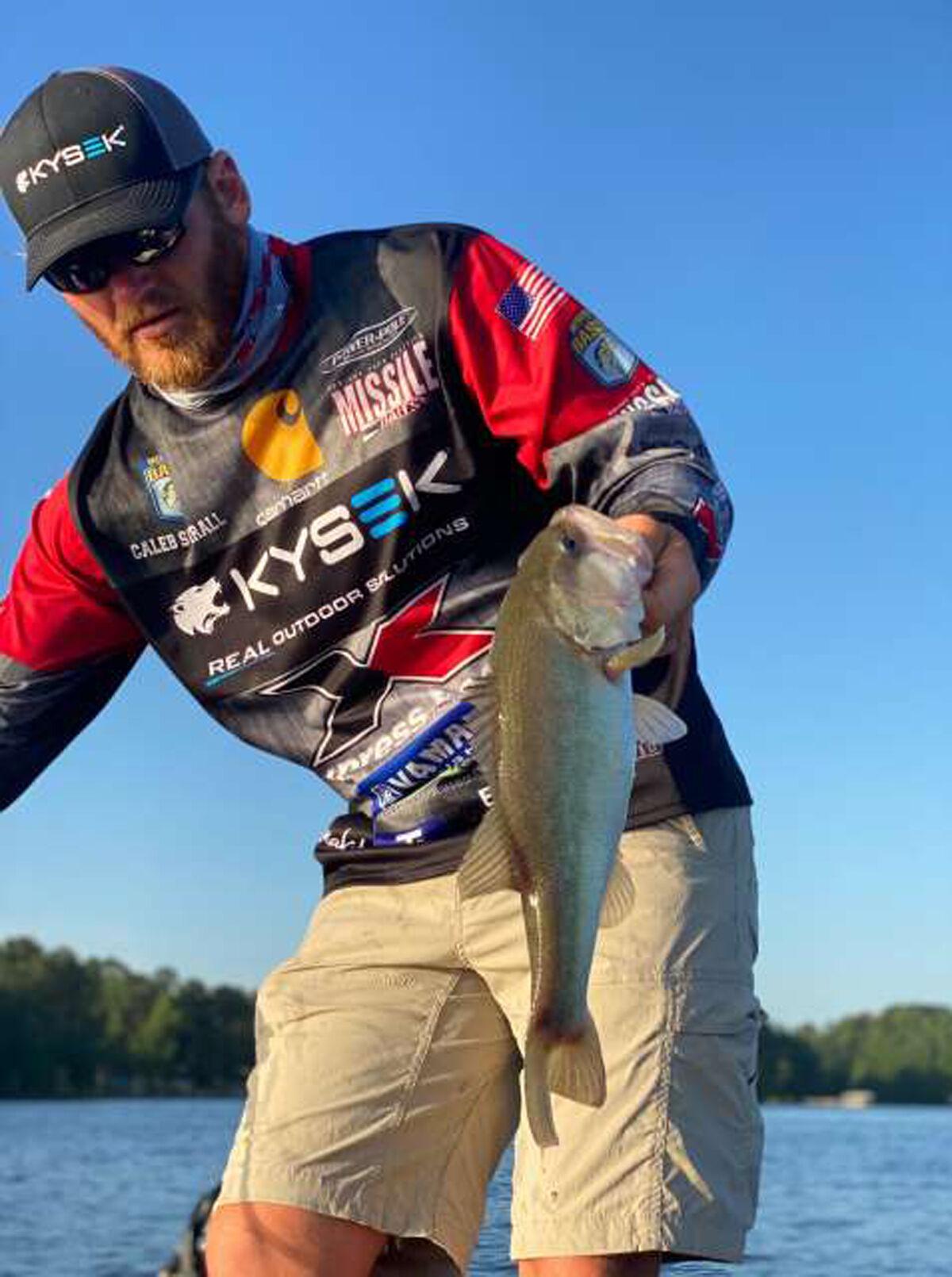 New Iberian Caleb Sumrall hopes to get his hands on bass like this, and much bigger, this week when he fishes the Bassmaster Elite tournament at Lake Guntersville out of Scottsboro, Alabama.

Caleb Sumrall contemplates the day ahead at a recent Bassmaster Elite Series tournament.

Caleb Sumrall is angling for another berth in the Bassmaster Classic.

New Iberian Caleb Sumrall hopes to get his hands on bass like this, and much bigger, this week when he fishes the Bassmaster Elite tournament at Lake Guntersville out of Scottsboro, Alabama.

When the air cools and the calendar page turns to October, Caleb Sumrall is usually in the woods bowhunting for deer in his home state or out-of-state, then knocking down ducks a month later in some prime waterfowl hunting areas.

Sumrall will be hunting a lot, all right, over the next five weeks but he’ll be hunting a berth in the 2020 Bassmaster Classic scheduled for March at Lake Ray Roberts near Dallas/Fort Worth. A Bassmaster Elite Series season schedule that went haywire this spring because of coronavirus pandemic restrictions means pro bass anglers who love to hunt, like Sumrall, will have fishing rods in their hands rather than shotguns and rifles through most of October and the first week of November.

The New Iberia outdoorsman’s quest to qualify for his third Classic begins Wednesday at Lake Guntersville, Alabama. Daily launches and weigh-ins are scheduled to be held at Goose Pond Colony Resort Marina in nearby Scottsboro.

The Lake Guntersville tournament is a makeup event. B.A.S.S. announced July 30 the postponed Cayuga Lake, New York, tournament originally set for early July would be held instead Sept. 30-Oct. 3 at Lake Guntersville. The last four stops on the tour are backloaded into October and early November, which is unprecedented.

There won’t be any rest for the weary. After Lake Guntersville, Sumrall and the Elites haul their boats to Santee Cooper in Clarendon County, South Carolina, on Oct. 8-11; Lake Chickamauga in Tennessee on Oct. 16-19, and Lake Fork in Texas for the Toyota Bassmaster Texas Fest benefiting Texas Parks and Wildlife Department on Nov. 5-8.

Sumrall is taking the timing — Elite derbies during the heart of deer hunting season — in stride.

“Yeah, yeah, that’s part of it. I’m trying to stay focused on fishing for now,” he said recently. “If I don’t get to hunt, that’s OK. I’ve just been blessed to fish.”

His mind and all of his will are preoccupied with a monumental task ahead of him. He is in 66th place in the Angler of the Year standings with 225 points going into the Lake Guntersville event and needs to come out of Lake Fork in the Top 40 to make the Classic, which he fished in 2020, coincidentally on Lake Guntersvile in March, and in 2019.

The 33-year-old former oil field worker has a mountain to climb. His family and other supporters in and around his hometown are behind him as are his sponsors, which include Xpress Boats, Yamaha, Carhartt, The Bridge Cemetery, Power Pole, Bruin Outdoors, Kistler rods, Missile Baits, Spro and Gamakatsu.

Sumrall knows those people and companies, including the men who donate each January at a fundraising event held by Phil Haney of New Iberia, will be cheering every one of his bass catches at The Big G, Santee Cooper, Lake Chickamauga and Lake Fork.

“Ah, I know. I’ve got to catch fish in them if I want to make the Classic, that’s for sure. I had a tough northern swing. I know I’m going to have to catch them,” he said.

Specifically, Sumrall “probably” needs to finish in the Top 40 in each of the last four tournaments to have a shot at making the Classic, he confided.

Six other Elites from Louisiana also have an uphill road to make the Classic. Derek Hudnall of Baton Rouge leads the way with 239 points but is in 62nd place, followed by Sumrall, then Brett Preuett of Monroe, 76th with 194 points; Tyler Carrierre of Youngsville, 77th with 190 points; Robbie Latuso of Gonzales, 81st with 173 points; Tyler Rivet of Raceland, 83rd with 169 points, and Quentin Cappo of Prairieville, 85th with 149 points. They are all chasing AOY leader Clark Wendlandt of Leander, Texas, who is atop the standings with 423 points.

Sumrall’s last outing was at Michigan’s Lake St. Clair in August. He finished 68th with 28 pounds, 12 ounces. That followed a 52nd-place finish in July at Lake Champlain in New York and a devastating 86th-place finish a week earlier on the St. Lawrence River, also in New York.

That Sumrall is going back to Lake Guntersville for the second time in 2020 is a pleasant surprise after he fished the Bassmaster Classic there in March. Lake Guntersville also is the site of his highest finish as an Elite — fourth in a regular-season tournament with 77 pounds, 10 ounces — in June 2019.

“It’s just been a weird year, for sure. I’m excited. It’ll be tougher but fishing will still be good,” he said.

The fishery’s bass should be positioned in a way that plays to his strength. Sumrall is at his best, perhaps, punching matted vegetation with a Missile Baits D-Bomb.

And there should be plenty of grass. It was beginning to show during that extra-cold Classic in March.

“The grass will be up. There will be a lot of grass fishing going on,” he said.

Sumrall won’t have tunnel vision, though.

He planned to leave Saturday. The first official practice day is today.

His goal is to take the first significant step up the leaderboard.

“I just want to get into position to make the Classic. There are three events back-to-back-to-back,” he said.

The next stop will be his first time at Santa Cooper, the famed lake in South Carolina.

“Oh, it’s got ’em (bass). It could be tough there. It’ll be another shallow place. It’s got a lot of cypress trees,” he said.

Tennessee’s Lake Chickamauga will be a little more familiar to him. He has fished it a few days in the past, he said.

“Again, that’s another grassy lake, another Tennessee River lake like Guntersville. It’ll have a lot of grass, too,” he said.

The regular-season finale at Lake Fork in Woods, Rains and Hopkins counties in Texas is legendary for giving up double-digit bass. There are a few “local” Elites that could shine on the fishery, Sumrall said, but he won’t be surprised if it fishes tough for many in the rest of the field.