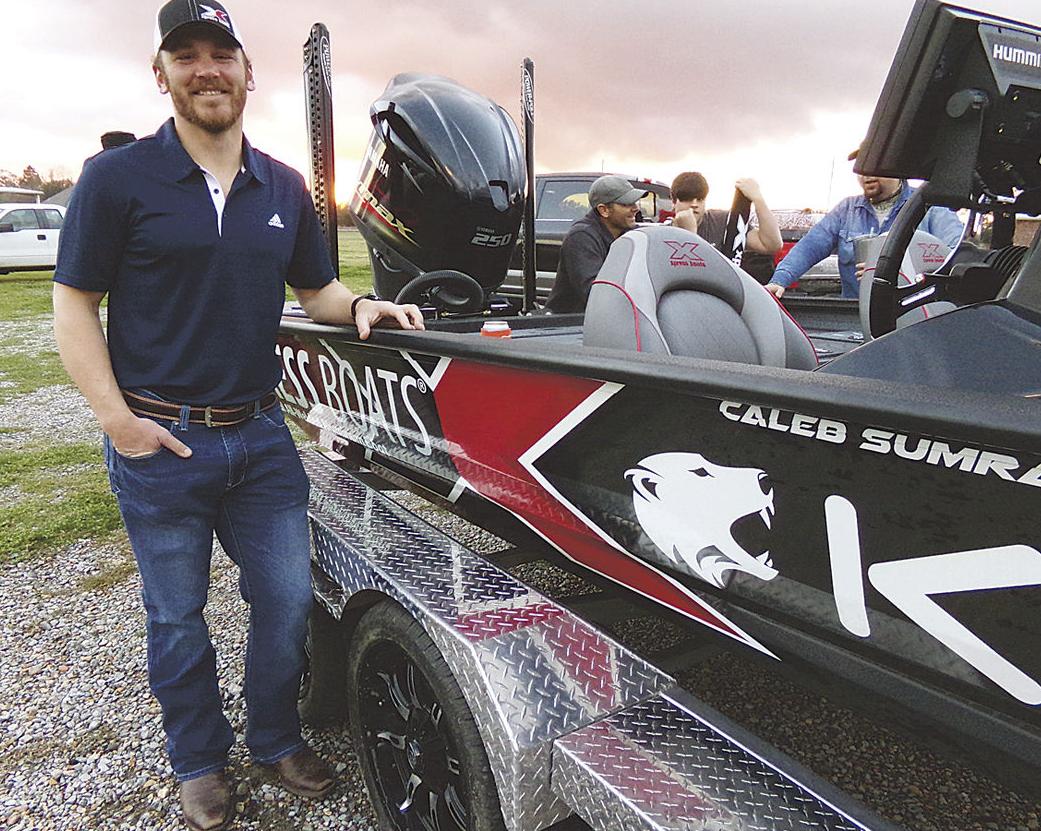 Caleb Sumrall smiles as he stands next to his newly wrapped Xpress X21 Pro he’ll use to fish the Bassmaster Elite Series tour in 2020. 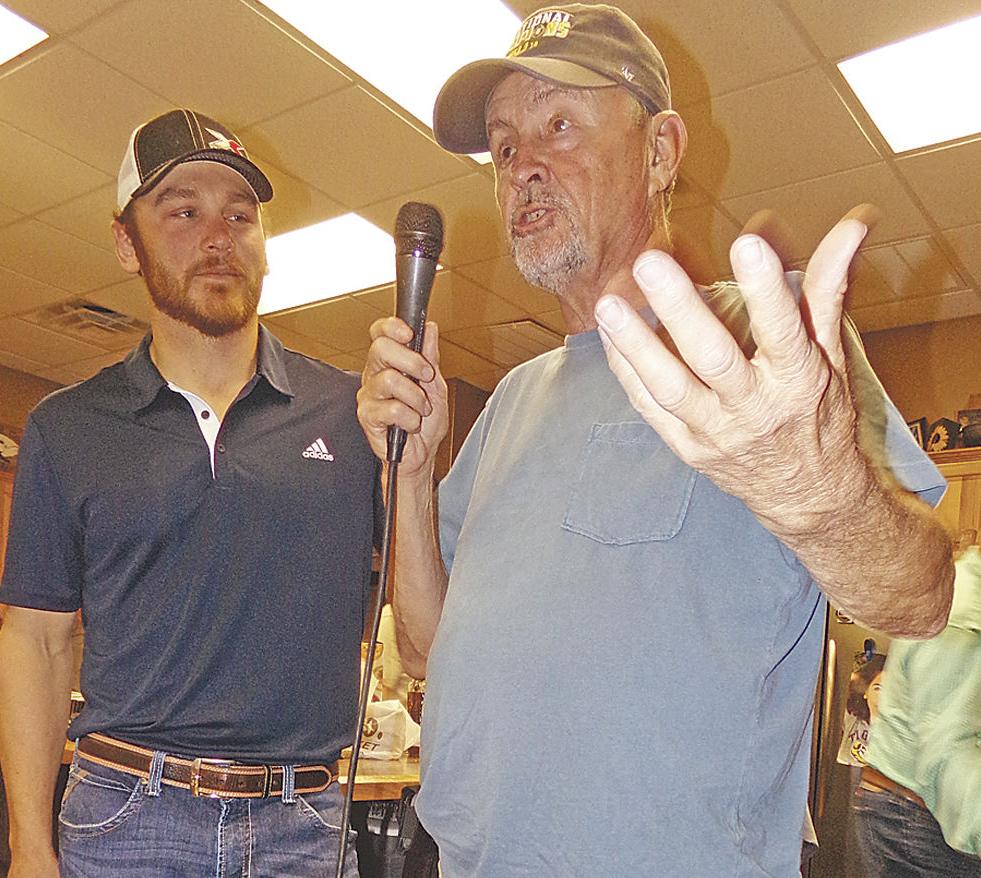 Caleb Sumrall, left, listens as host Phil Haney talks about why he started the annual fundraising event in January 2018 to help defray expenses on the pro bass fishing circuit for Sumrall. Haney is an avid bass fisherman who consistently catches bass at Toledo Bend. 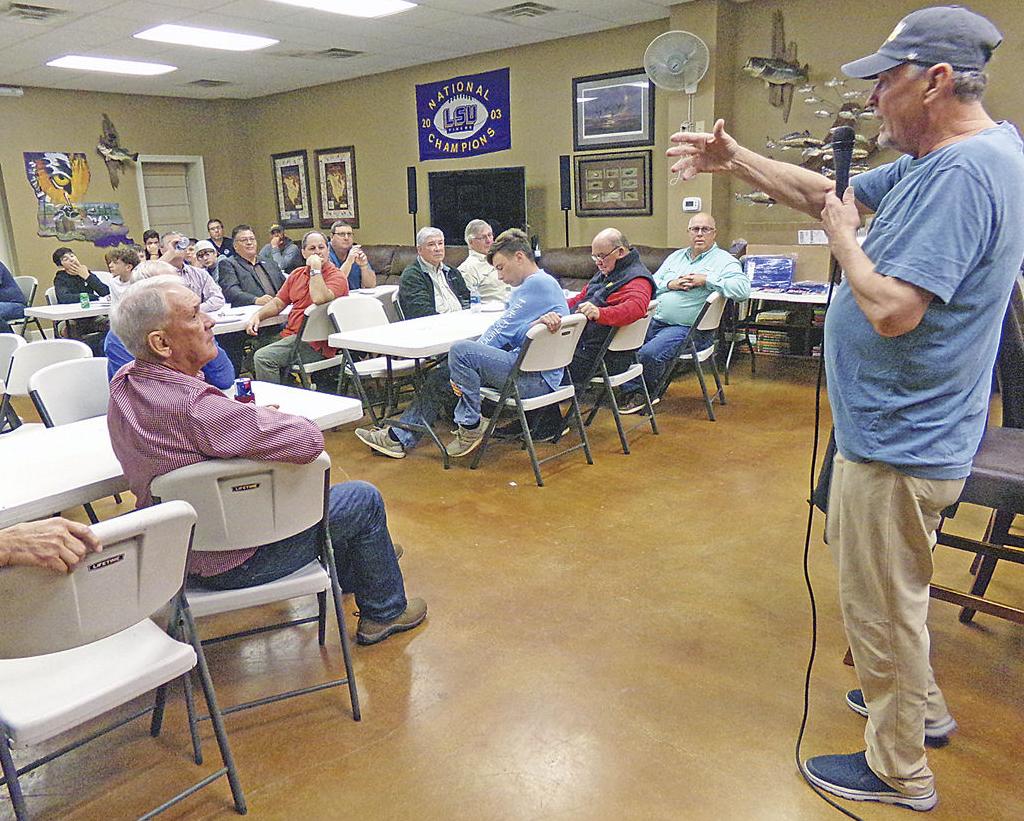 Host Phil Haney, right, speaks to the crowd after supper Thursday evening during a fundraising event for Caleb Sumrall. 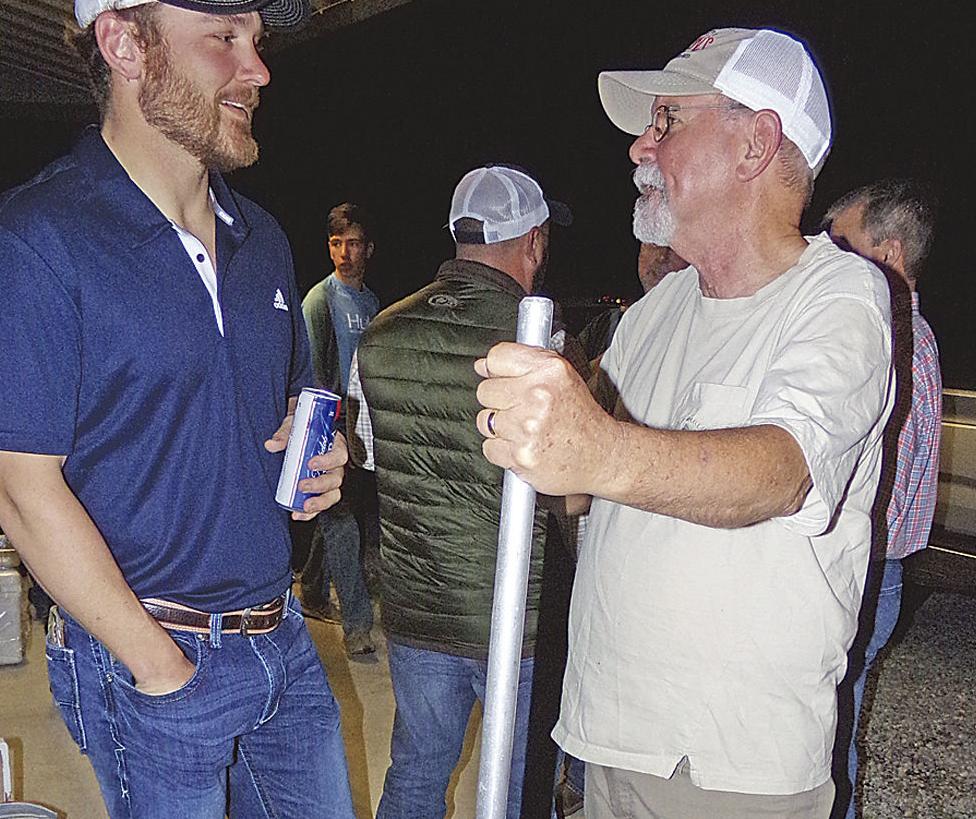 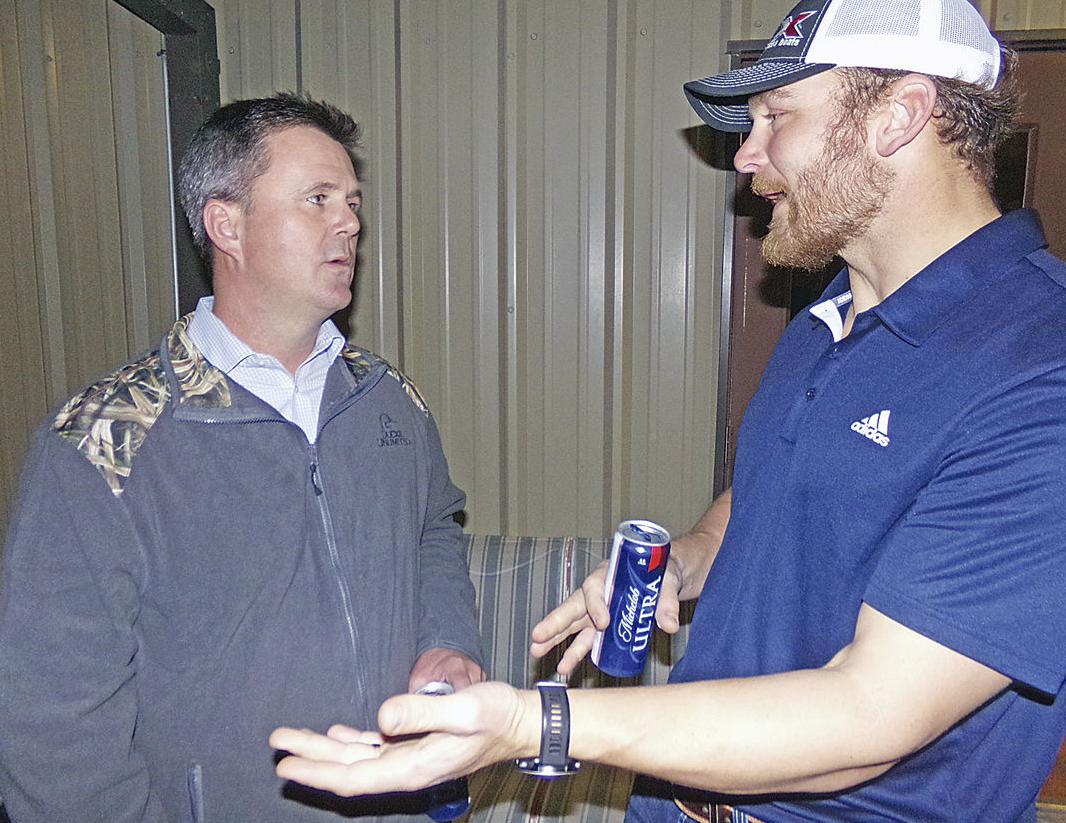 State Rep. Beau Beaullieu, left, and Caleb Sumrall discuss the bass fishing season ahead and other topics at the event. 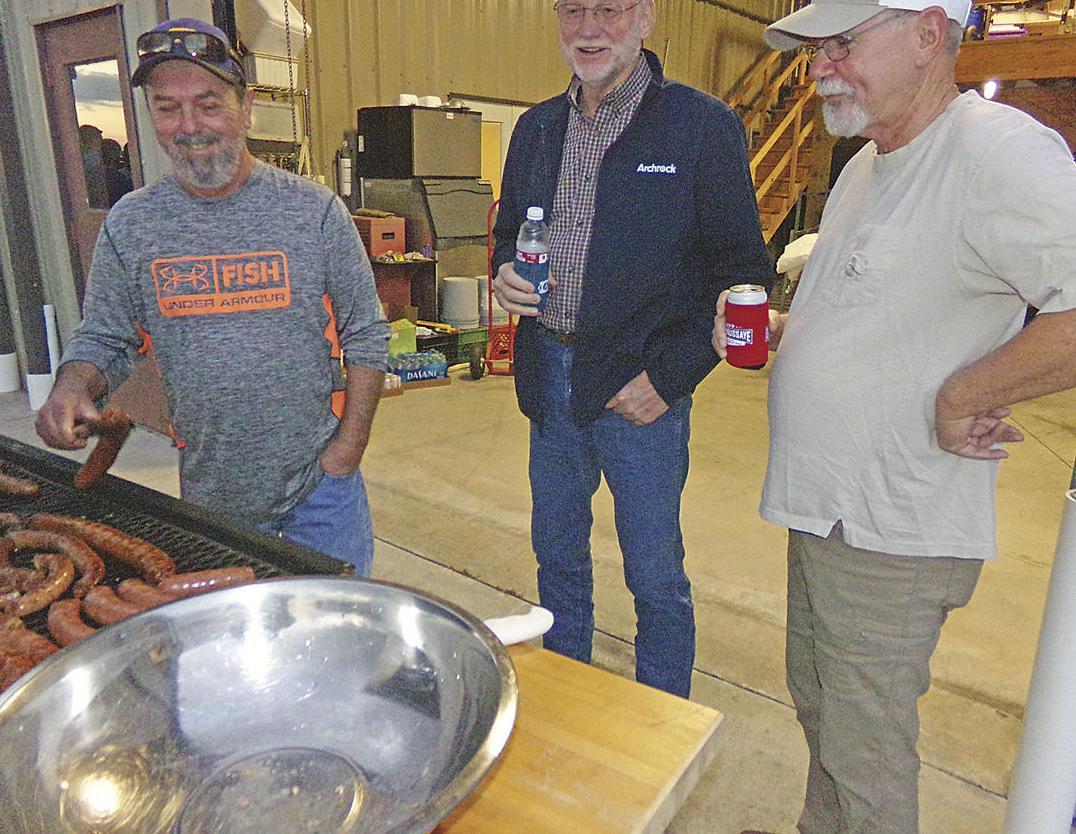 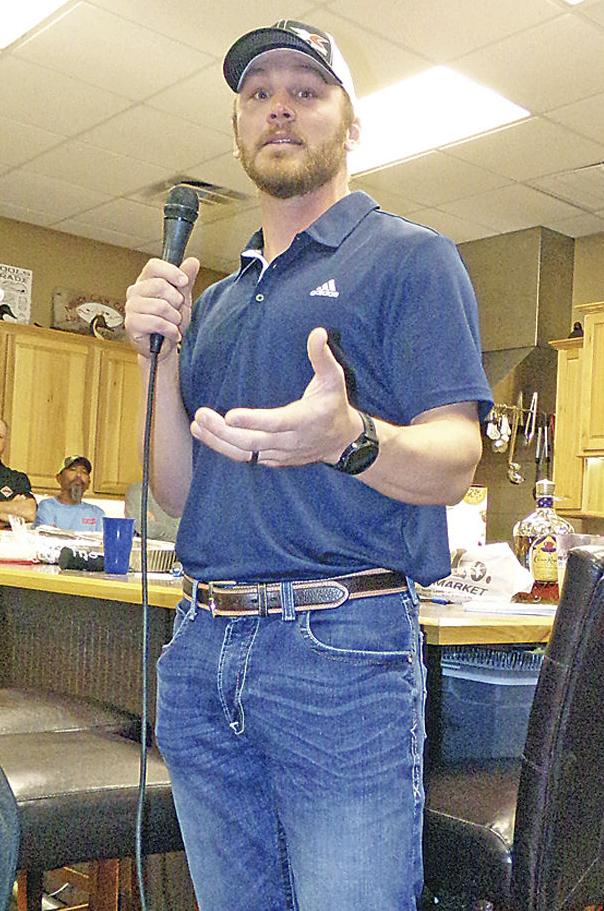 Caleb Sumrall gestures Thursday night while he talks to the crowd attending a fundraiser for him at Phil Haney’s residence in rural Iberia Parish.

Caleb Sumrall smiles as he stands next to his newly wrapped Xpress X21 Pro he’ll use to fish the Bassmaster Elite Series tour in 2020.

Caleb Sumrall, left, listens as host Phil Haney talks about why he started the annual fundraising event in January 2018 to help defray expenses on the pro bass fishing circuit for Sumrall. Haney is an avid bass fisherman who consistently catches bass at Toledo Bend.

Host Phil Haney, right, speaks to the crowd after supper Thursday evening during a fundraising event for Caleb Sumrall.

State Rep. Beau Beaullieu, left, and Caleb Sumrall discuss the bass fishing season ahead and other topics at the event.

Caleb Sumrall gestures Thursday night while he talks to the crowd attending a fundraiser for him at Phil Haney’s residence in rural Iberia Parish.

Bassmaster Elite Series pro Caleb Sumrall has been knocking down his goals one by one since his rookie year in 2018.

To give him a boost toward clearing future goals — such as his desire to finish in the Top 10 in the Angler of the Year standings in 2020, dozens of Teche Area residents, mostly outdoorsmen, young and old — converged on Phil Haney’s residence Thursday in rural Iberia Parish for what has become an annual fundraising supper for Sumrall.

Sumrall’s goal last year was to qualify for the 50th annual Bassmaster Classic scheduled for March 6-8 at Lake Guntersville near Birmingham, Alabama. Mission accomplished, by a landslide, after he finished 21st with 715 points in the AOY race won by Scott Canterbury of Odenville, Alabama.

He appreciated the show of support in his endeavors.

“Ah, tonight was unbelievable. Every year it’s been amazing. The turnout’s been amazing every year. All the people that want to help … it’s never taken for granted, I assure you. Anything (monetary support) helps. It helps a lot,” Sumrall said as people filed out of Haney’s “man cave.”

“I’m excited. There’s a lot of unknowns but I’m going to work hard to have the best year we can. I just can’t say thank you enough. It’s hard to put into words. I’m just ready to get out there and make everybody proud.”

Sumrall, 33, towed his new Xpress X21 Pro aluminum bass boat to the event. It was “wrapped” with his sponsors’ logos Thursday by Tommy Lipari and his staff at Lipari Specialties.

Xpress Boats offered him a boat to fish his third season and he accepted in November. Sumrall, who fished out of a Bass Cat Cougar in 2019, is the fourth Elite pro to hook up with Xpress Boats. The others are Bill Lowen, who lives in Brookville, Indiana; Dale Hightower of Mannford, Oklahoma, and Harvey Horne of Bella Vista, Arkansas.

Men from all walks of life were on hand to eat sausage links grilled on the spot by Randy Norris and to eat the sumptuous shrimp stew cooked by Haney’s brother-in-law, retired banker Ross Landry. Landry, who enjoys cooking for large crowds, said 30 pounds of shrimp went into the pot.

French bread and potato salad rounded out the tablefare.

When Ronnie Dressel of Loreauville took his first bite of shrimp stew, he exclaimed, “Oh my God!” His delighted reaction was common in the crowd, which included members of the Loreauville Tigers Fishing Team.

Haney, retired 16th Judicial District  Attorney, addressed his visitors after  supper was served and noted oftentimes the life of a bass pro isn’t glamorous. It’s putting the tires on the pavement to parts unknown and places they might fish once a year, fishing when it’s 90-plus or 32 degrees, rain or snow, flood conditions or ideal conditions, 3-foot seas or flat calm.

Sumrall has met the challenges, Haney said, adding, “Every year he did better.”

Driving thousands of miles is costly, he said, which is why he is glad to help. Once Sumrall arrives at  various destinations, he figures out how to catch bass, the host said.

“He’s had to learn how to fish all these areas and he’s made us proud,” he said.

When Sumrall spoke to the crowd, he said, with a chuckle, that sometimes, “I don’t know if I’m or professional fisherman or a professional driver.”

The third-year bass pro told the crowd he will work hard to accomplish his goals.

Sumrall and his wife, Jacie, have two children, Clélié and Axel. The couple is preparing for his first tournament of the year, Feb. 6-9 at St. Jones River near Palatka, Florida.

Frank Randazzo of New Iberia, who was born and raised in St. Martinville, attended the fundraising supper for the second straight year. The 61-year-old former world skeet shooting champion talked to the man of the hour near the pond in the host’s backyard.

Later, Randazzo said, “I’m here because I’m a bass fisherman and this is a local guy. I think it’s wonderful a local guy can represent the area when he’s fishing against professional bass fishermen.

He is amazed, he said, by touring pros who adapt to fishing conditions in different states.

“You watch the Kevin Van Dams. It could be 14 degrees and somebody’s going to catch fish,” he said.

Randazzo was talking to Dressel, who agreed and also was proud to help Sumrall.

“I love it,” Dressel said as he looked around at others there for the same purpose.

“He’s going through a lot. You have to be a bass fisherman to understand it. He and his wife have two kids and she stays at home. My hat’s off to her and my hat’s off to him,” he said.

The travel, pulling a boat, is grueling. Sumrall logged 60,000 miles his rookie season on the Elite tour. After last year’s tournament at Lake Guntersville, where he finished fourth and won $15,000, Sumrall and other Elites in this region hitched up their boat two months later and drove 24 hours to New York to fish the St. Lawrence River.

To put it in perspective, Dressel said, imagine what it’s like finding fish in the Atchafalaya Basin or Lake Dauterive-Fausse Pointe. Then consider that sometimes after a bass pro prefishes, say, the St. Lawrence River and locates bass, returns a month later for the tournament and, poof, those bass aren’t to be found then it’s time to start over.

“Think about that,” Dressel said.

Donnie Hensgens, 61, of New Iberia, confided he isn’t a gung-ho bass angler but he is a hunter who recently enjoyed a great dove hunt in Texas with his sons, Heath, 29, and Hans, 21. He said his daughter, Hailey, 26, can hold her own in any skeet shoot.

He attended because he’s a close friend of Haney’s, he said, plus he’s friends with Sumrall’s father, Steve, and his mother, Patty.

“I watched Caleb come up in diapers,” he said.

Hensgens wouldn’t miss the fundraiser for the world.

“Oh, yeah, it’s for the support. We need to reach out to guys like that in the community. Look at those kids (boys at the event), how they are participating in this. They look up to Caleb. I’d prefer them on the deck of a boat than in front of a TV playing video games,” he said.