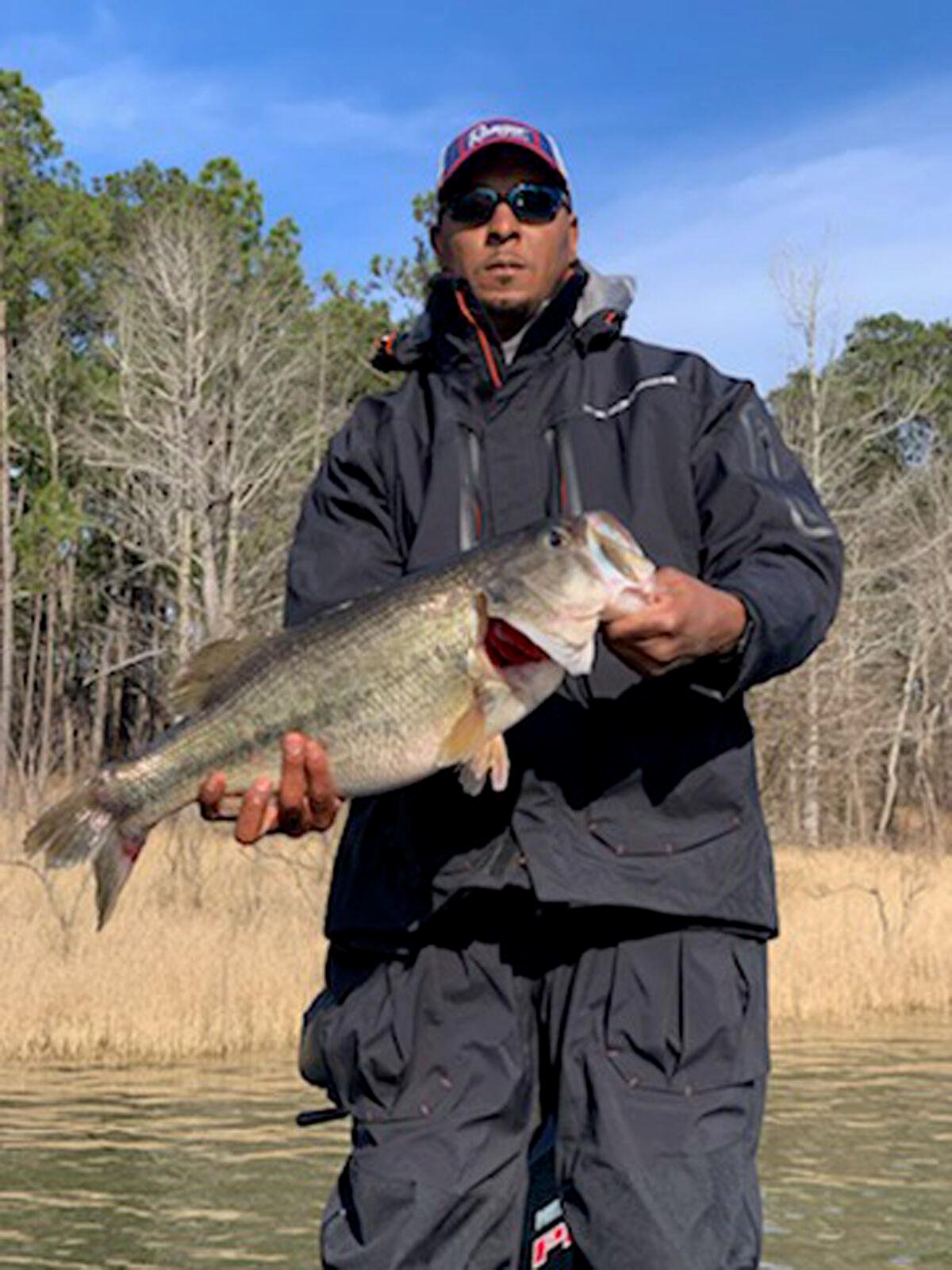 Dennis Narcisse of St. Martinville has a good grip on the 9.59-pound bass he caught Jan. 9 while fishing the Texas Bass Champs Tournament Trail tournament at Lake Sam Rayburn. Narcisse and Brannon Mire of Broussard fished the circuit’s opener on a bitterly cold Saturday and finished 12th in the 290-boat field. Narcisse’s bass was the second-biggest of the day. 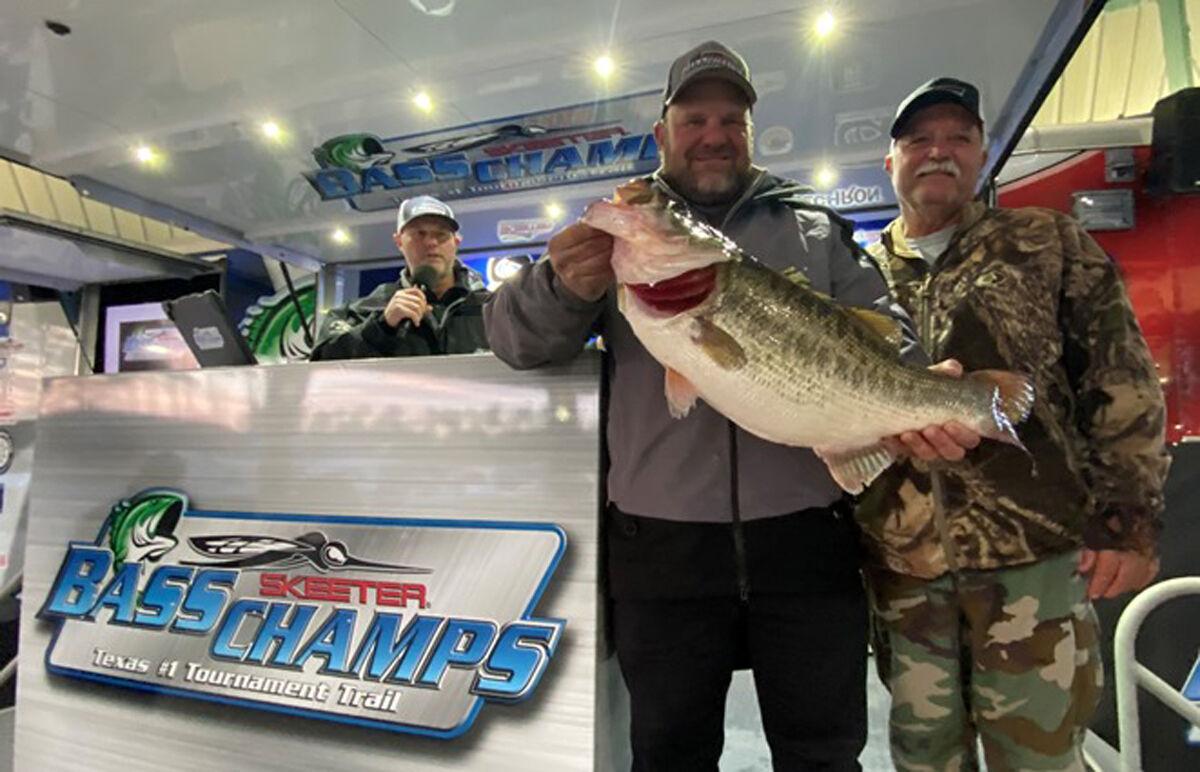 Travis Moore and Norman Land, both of Cleveland, Texas, pose proudly with the 13.44-pound bass they weighed in at the Bass Champs 2021 East Region opener on Lake Sam Rayburn. It was the biggest bass of the tournament.

Dennis Narcisse of St. Martinville has a good grip on the 9.59-pound bass he caught Jan. 9 while fishing the Texas Bass Champs Tournament Trail tournament at Lake Sam Rayburn. Narcisse and Brannon Mire of Broussard fished the circuit’s opener on a bitterly cold Saturday and finished 12th in the 290-boat field. Narcisse’s bass was the second-biggest of the day.

Travis Moore and Norman Land, both of Cleveland, Texas, pose proudly with the 13.44-pound bass they weighed in at the Bass Champs 2021 East Region opener on Lake Sam Rayburn. It was the biggest bass of the tournament.

When a deep-diving crank bait ceases to vibrate as it wobbles and dives through 20-foot plus depths around structure, odds are something real big is on tap.

A soon-to-be 43-year-old St. Martinville bass angler had that feeling, or lost that feeling, about 8 a.m. on a frigid Jan. 9 morning at Lake Sam Rayburn in Texas, home to so many trophy-sized bass. Dennis Narcisse knew what to do.

“When I felt the bait stop, I just laid into it,” Narcisse said three days later as he recalled his hard hookset on a heavy fish. “After about four or five cranks is when she came out of the water. We saw how big the bass was. I dropped to my knees (and kept the fishing rod’s tip even lower). I didn’t want her to do that again. I definitely didn’t want her to jump.”

Narcisse, who was fishing the Bass Champs 2021 Texas Tournament Trail opener with Brannon Mire of Broussard, carefully played the big bass all the way to Mire’s Ranger bass boat. Mire used a special net to get the “hawg” safely in the boat.

That bass weighed 9.59 pounds and anchored their five-bass limit weighing 18.05 pounds, good enough for a 12th-place finish and $1,100 in the 290-boat field. It also was Narcisse’s personal best bass anywhere.

Naturally, Narcisse, whose nickname is “Lala,” and Mire were hopeful the huge fish would emerge as the tournament’s biggest bass. They weighed in with the rest of the first flight and left the tournament site before finding out the final results.

When the two got back to the camp, Narcisse wondered aloud if he should call to get the scoop.

The final word was a shocker. Narcisse’s big bass was second to a 13.44-pounder carried to the scale by Travis Moore and Norman Land, both of Cleveland, Texas.

“LOL. Got smoked on big bass. Dude had a damn 13-pounder,” he wrote in a text on Monday.

Narcisse later recalled with a soft laugh Mire’s words soon after the results were publicized, “He said, ‘If you’re going to get your butt kicked, Lala, get it kicked by a 13-pounder.’”

The Bass Champs contest was won by Josh Rodgers of Beaumont, Texas, and Casey Burleigh of Orange, Texas, whose five bass weighed 26.69 worth $20,200 (with Sure-Life Bonus). Two Louisiana bass anglers, Keelan Manuel of Sulphur and Clint Conrad of Moss Bluff, were second with a limit that tipped the scale to 24.33 pounds for $6,500.

Louisiana bass anglers also grabbed third place in their neighboring state as Pete Lowe or Woodworth and Jerry Strother of Glenmora checked in with five bass weighing 21 pounds for $5,000.

Narcisse, operations manager for Reladyne Inc., was upbeat after the tournament, which started with temperatures hovering around 30 degrees.

“We were able to get some good points leading up to the rest of the series,” he said, noting the team is concentrating on the next stop Feb. 13 at Toledo Bend.

“We’re focusing on that one. We’ll put this one behind us,” he said.

This is their second season with the Bass Champs. They have fished four Sealy Outdoors Big Bass Splash tournaments since Mire’s uncle, Robert Mire of Lafayette, introduced Narcisse to his nephew, Brannon. Narcisse and the elder Mire were working at the time for Schlumberger.

“We just hit it off from there,” Narcisse said.

Make no mistake about it, he said, Mire is a master at finding bass, big and small, offshore, he said. His buddy relies on his marine electronics like so many successful modern pros do to get away from the madding crowd “beating the banks.”

“I definitely can’t take credit for all that. He knows Rayburn and Toledo Bend pretty good. He fishes the Texas Team Trail,” Narcisse said.

Unfortunately, Mire was unable to prefish for the opener because of trolling motor issues related to lithium batteries, he said.

Drawing a lucky spot in the first flight, the two ran far to the north to fish structure in 25-foot depths around bends of the river channel near shallow water. He had a few spots marked with bass before the tournament, including two bass at their second stop of the day.

Their first stop didn’t pan out after 15 minutes so Mire moved to another spot on upper Lake Sam Rayburn.

“He said we’d either catch a bunch of little ones or a giant,” Narcisse said.

He offered whatever was there a whitish/purplish “with a little orange in it” Strike King 8XD, which dives about 22 feet. Some old deadfalls were in 21- to 22-foot depths.

“It was my seventh or eighth cast when I caught that giant,” he said.

Narcisse, who celebrates his 43rd birthday on Tuesday, and his partner watched the bass make a run to the surface but apparently was too big to clear the cold water.

After that catch, Mire, who owns Precision Glass Inc., filled out their limit in a cove filled with 7-foot deep grass.