Check your email for details.

Submitting this form below will send a message to your email with a link to change your password.

An email message containing instructions on how to reset your password has been sent to the e-mail address listed on your account. 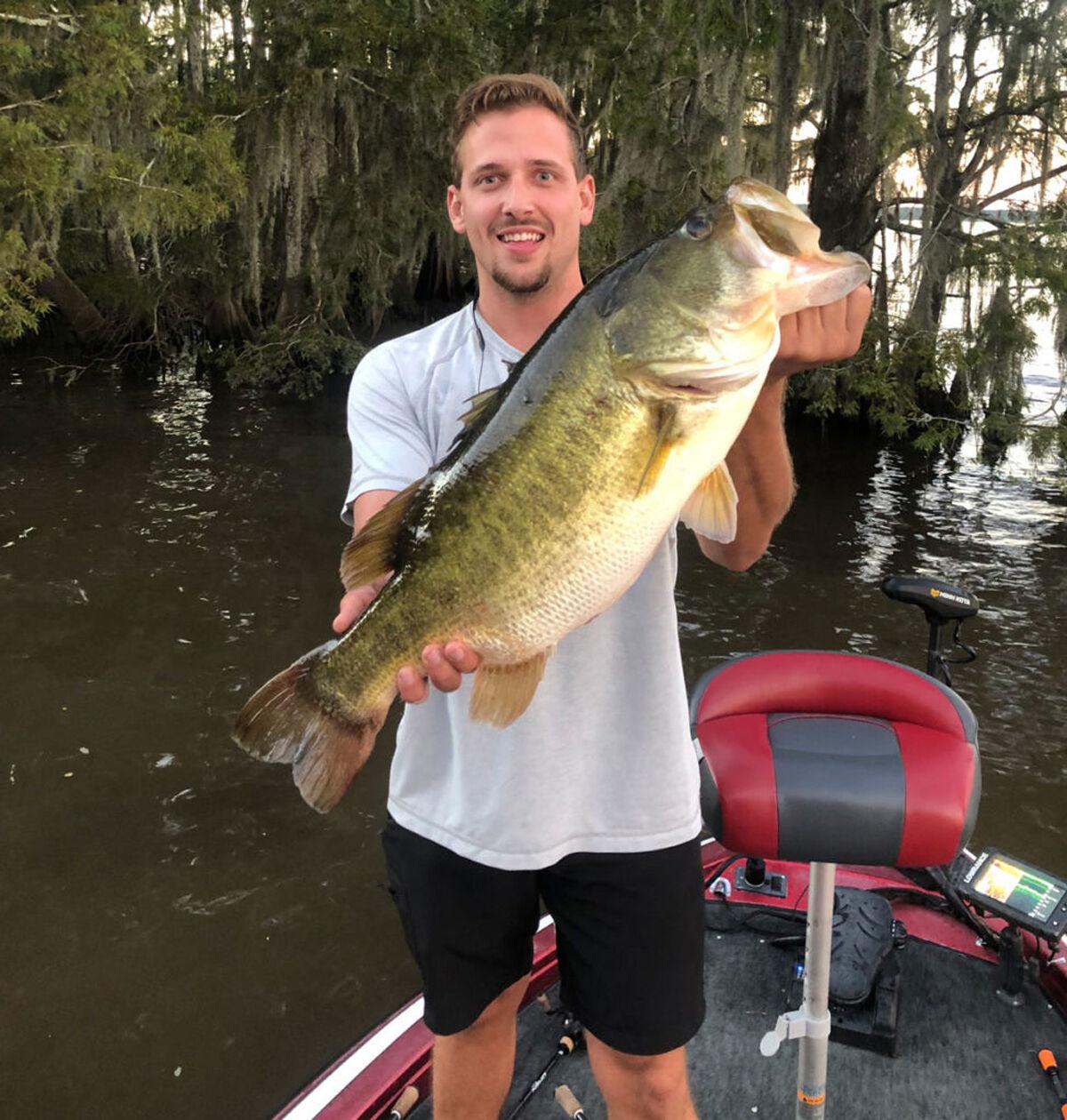 Johnathan St. Germain smiles while holding a 9-pound, 13-ounce bass he caught Sept. 23 on his 24th birthday while fishing Lake Fausse Pointe with his friend, Dillion Bordelon of Lafayette. St. Germain, who has lived most of his life in New Iberia, was living in Houma when Hurricane Ida hit and destroyed of his home Aug. 29. 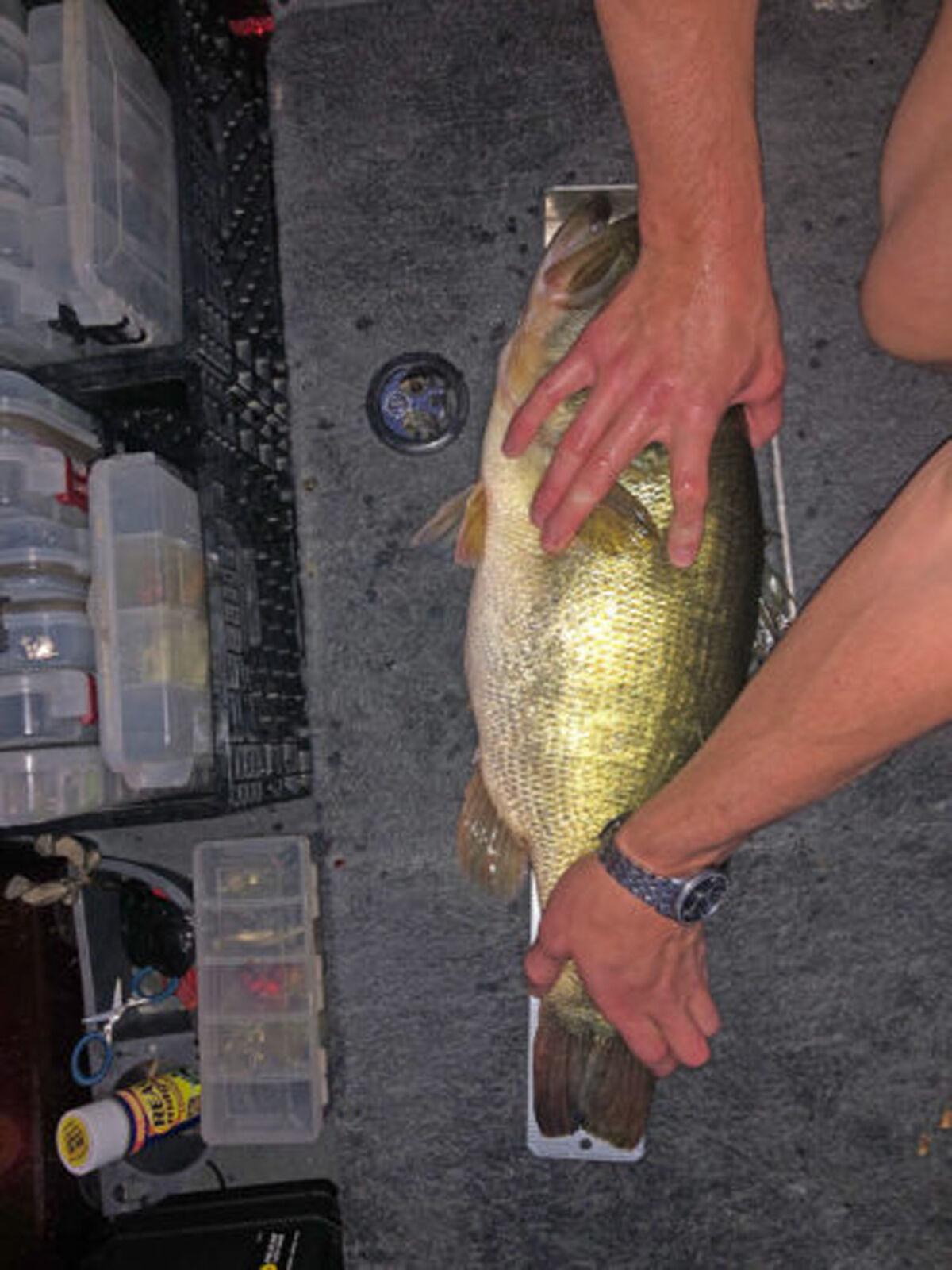 Johnathan St, Germain’s 9-pound, 13-ounce, bass used every inch of a 25-inch measuring board after he caught it Sept,. 23 in Lake Fausse Pointe.

Johnathan St. Germain smiles while holding a 9-pound, 13-ounce bass he caught Sept. 23 on his 24th birthday while fishing Lake Fausse Pointe with his friend, Dillion Bordelon of Lafayette. St. Germain, who has lived most of his life in New Iberia, was living in Houma when Hurricane Ida hit and destroyed of his home Aug. 29.

Johnathan St, Germain’s 9-pound, 13-ounce, bass used every inch of a 25-inch measuring board after he caught it Sept,. 23 in Lake Fausse Pointe.

Johnathan St. Germain needed a fishing fix. He got it and more — a giant-sized overdose — the next-to-last week of September.

The New Iberia native caught and released a 9-pound, 13-ounce, bass Sept. 23 while fishing with a friend, Dillion Bordelon of Lafayette in Lake Fausse Pointe near Eagle Point. It was a welcome shot in the arm for an outdoorsman who lost his home a little less than a month earlier to Hurricane Ida.

“I’ve never seen anything that big in my life. It looked like a dinosaur. It was longer than the net. If it was during the spawn, with a big fat belly, it’d be pushing 12 easily.”

St. Germain’s mother, Bonnie Hebert St. Germain of New Iberia, told him the trophy-sized bass was a special present for her son, whose father, the late Amar “A.J.” St. Germain, died when their youngest son was 12. She took that to heart when she heard about the 9-13.

“She was so happy. She said, ‘That’s your father in heaven giving you a Happy Birthday,’ ” he said.

St. Germain, the youngest of 11, who graduated from New Iberia Senior High in 2016, moved six months ago to Houma, where he started working as an aircraft mechanic for APEX. Five months later he was forced out of his residence along Bayou Little Caillou by Hurricane Ida.

St. Germain’s rental home, which he planned to buy, suffered extensive damage when the storm surge inundated the first floor. The kitchen and other rooms downstairs were wrecked. Every window on the second floor was blown in by the wind and half the roof was missing.

St. Germain mostly is staying post-Ida in an RV at the airport in Houma, or staying with his mom in New Iberia. It’s been a while since he has fished.

Bordelon, a Hessmer native who regularly fishes multiple bass club tournaments with his brother, Alan Bordelon of Hessmer, and St. Germain met through mutual friends. Fishing was a common denominator.

“He had just come in (from work). It was his birthday. His house was crushed,” Bordelon said.

When Bordelon, 25, offered to take him fishing that Thursday afternoon out of Marsh Field Boat Landing, St. Germain jumped at the chance. After all, the aircraft mechanic is so hooked on fishing he’d launch his 18-foot War Eagle, a center console boat good for saltwater or freshwater fishing, at his house on the bayou each day after he got off work and fish for speckled trout and redfish in the marshy areas of Terrebonne Parish.

“That kept me going,” St. Germain said about his daily outings.

“I’ve still got my boat,” he said, happily, relieved, noting he stored it in a hangar at the airport before Hurricane Ida smashed into southeast Louisiana on Aug. 29. He calls the boat his “trout go-getter.”

St. Germain also fishes for redfish and speckled trout around Cypremort Point, where he started wetting a line in high school and college with a friend, a commercial oyster fisherman, and others. He fished freshwater years ago.

“I grew up around here. I used to fish the (Atchafalaya) Basin on the Henderson side, Butte La Rose. My mom’s friends used to take me. She knew I love the outdoors,” he said.

“When I first got out there I didn’t care if I’d catch or not. I just wanted to be on the water, to be able to go fishing,” he said.

Bordelon, a medical salesman with Fulcrum Sales Marketing, launched late in the afternoon, then drove to a cypress-tree lined area of the lake with a canal nearby. He caught three bass around the cypress trees before they tried the canal without success.

The Lafayette bass angler decided to idle back to the front and fish where he had some action earlier.

The water was more stained, slightly muddy, around the cypress trees at the mouth of the canal where the water was moving and shad present. Bordelon suggested tying on a spinnerbait so bass could see the artificial lure.

St. Germain made a cast and things went awry for a few moments. The spinnerbait thwacked into some moss hanging on a cypress tree, so he reeled it in, removed the moss and made a better cast under the moss.

“Technically, that was my first cast. It (the hawg) tapped right when it hit the water. I was reeling it in and felt the tap. It started getting heavy. I said, ‘Woe. Woe. Woe.’ The line started taking off,” he said.

At first, Bordelon, a veteran bass tournament angler, had a feeling the angler in the back of the boat was hung up.

“I saw his rod load up. I saw him reeling. I initially thought he hooked into a stump” and he told his fishing buddy that, Bordelon said.

“As I’m talking the fish comes halfway out of the water,” he said.

St. Germain said, “When I saw that thing come out of the water, it’s a moment I won’t ever forget. He (Bordelon) freaks out.”

He thumbed the spool hard as he does with bullish redfish, which caused more consternation.

“I said, ‘Keep the rod tip down and let off the pressure (with the thumb),’” Bordelon said, noting he had the drag set based for 15-pound line.

‘Got to slow this thing down’

Bordelon’s bassin’ experience took over. He decided to trolling motor on high toward the big bass while he got the landing net handy.

His 16-foot Skeeter with a 90-h.p. Yamaha cruised to intercept the hawg.

Bordelon scooped alongside the boat with the net, snared the giant and put it in the boat.

It took about 20 minutes for the extended adrenalin rush to fizzle out. Bordelon put the boat on “spot lock.”

They took photos, put it in the livewell, measured it for a replica mount by a taxidermist. Then came the moment of truth as the sun was setting.

There was no doubt he was releasing the 25-inch long bass, St. Germain said. Bordelon videoed weighing it a third time, then recorded the jubilant, respectful release (youtube.com: New Iberia angler catches monster bass on birthday).

“It’s better than putting it in the freezer,” St. Germain said, adding it’s worth it if someone else can experience the thrill of catching a bass that size.

“Yeah, it was insane. It was crazy. I didn’t get a bite all day. Then I caught that one. It’s like the bass was inviting me back to freshwater fishing,” he said about the highlight of his blissful three-hour afternoon trip.

Bordelon said, “I didn’t think that body of water had that big-fish capability.”

St. Germain proved it does.

Our Cajun Creole Cookbook that will be publishing in November