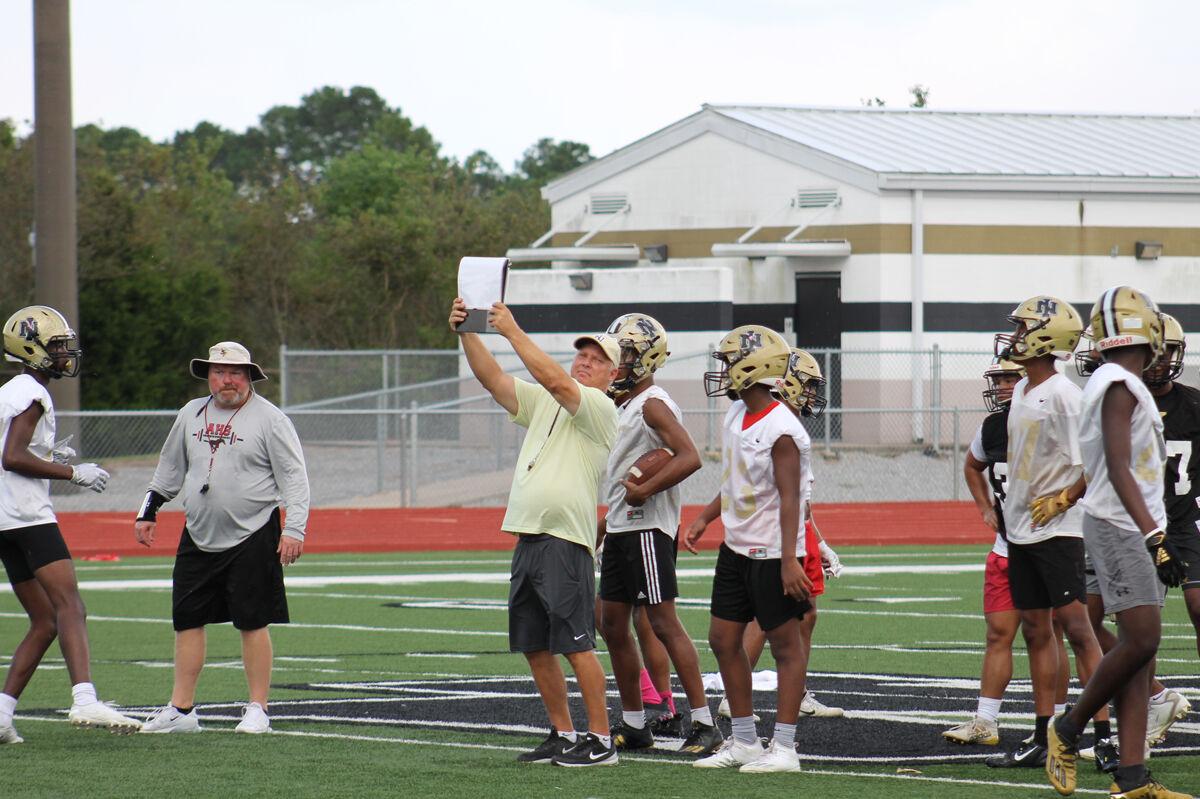 New Iberia Senior High head football coach Curt Ware, center, holds up a play for his offense during a practice this week as the Yellow Jackets prepare for the upcoming football season. 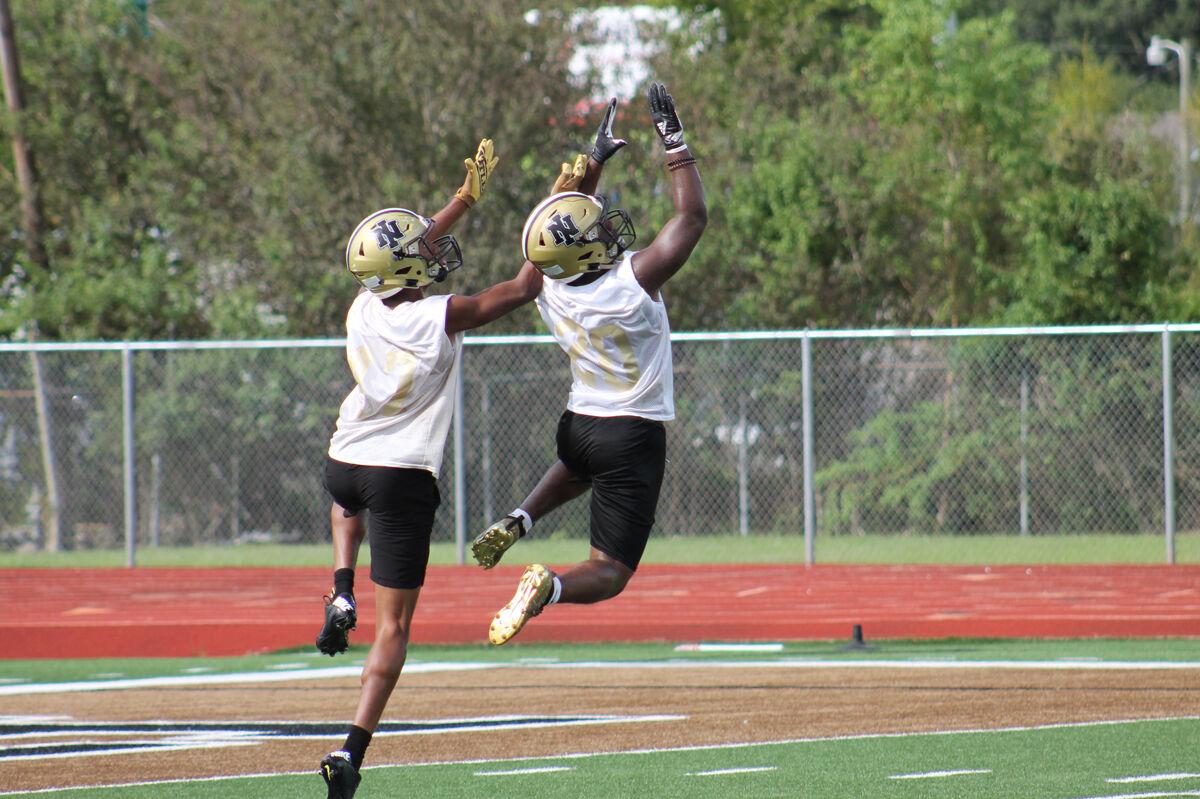 New Iberia Senior High works on passing offense and defense during seven-on-seven drills  this past week. 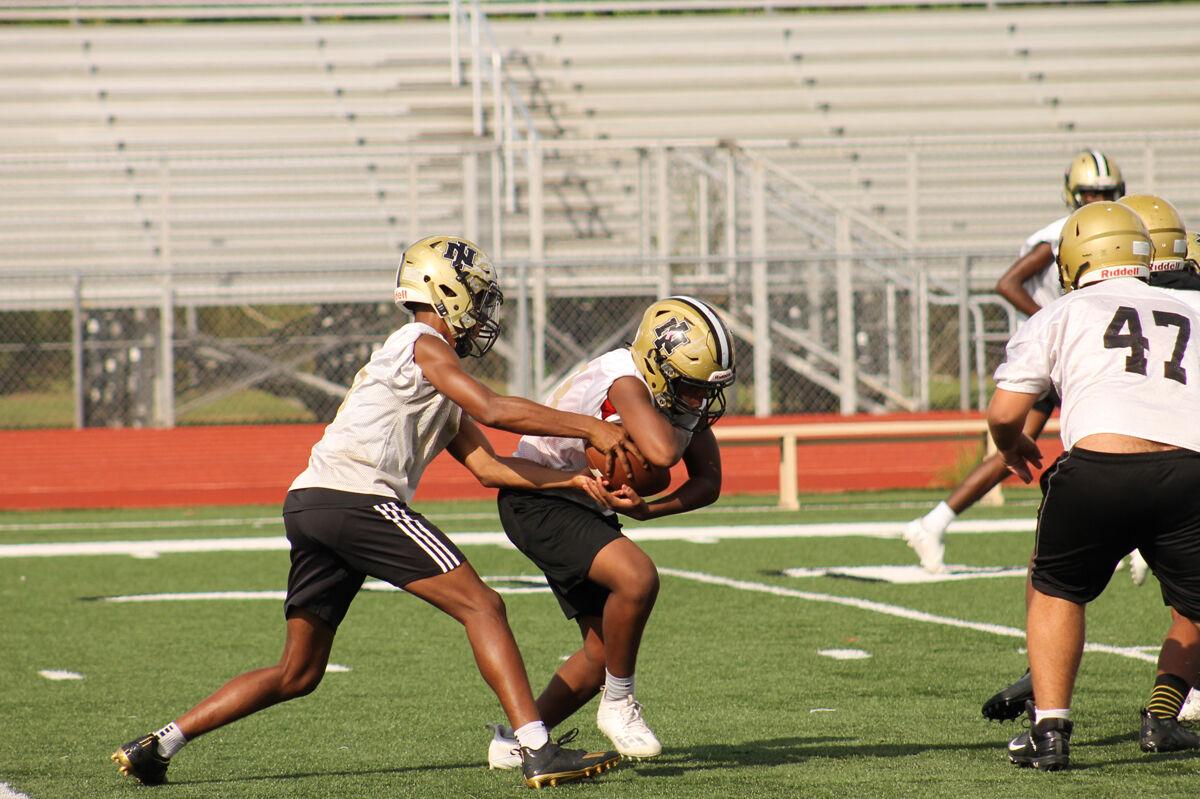 The run game still accounts for perhaps 75 to 80 percent of New Iberia Senior High’s Wing-T offense, coach Curt Ware said, and the Yellow Jackets are more proficient at the offense with a year of work under their belts. 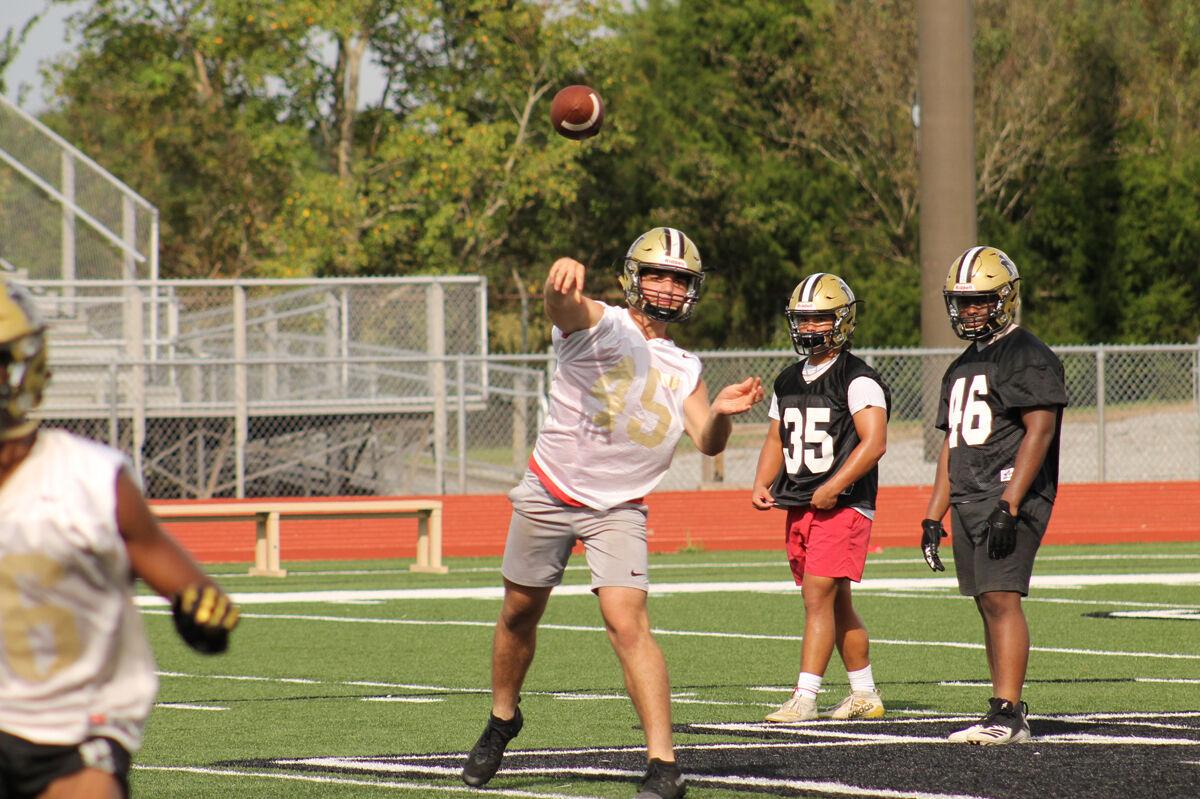 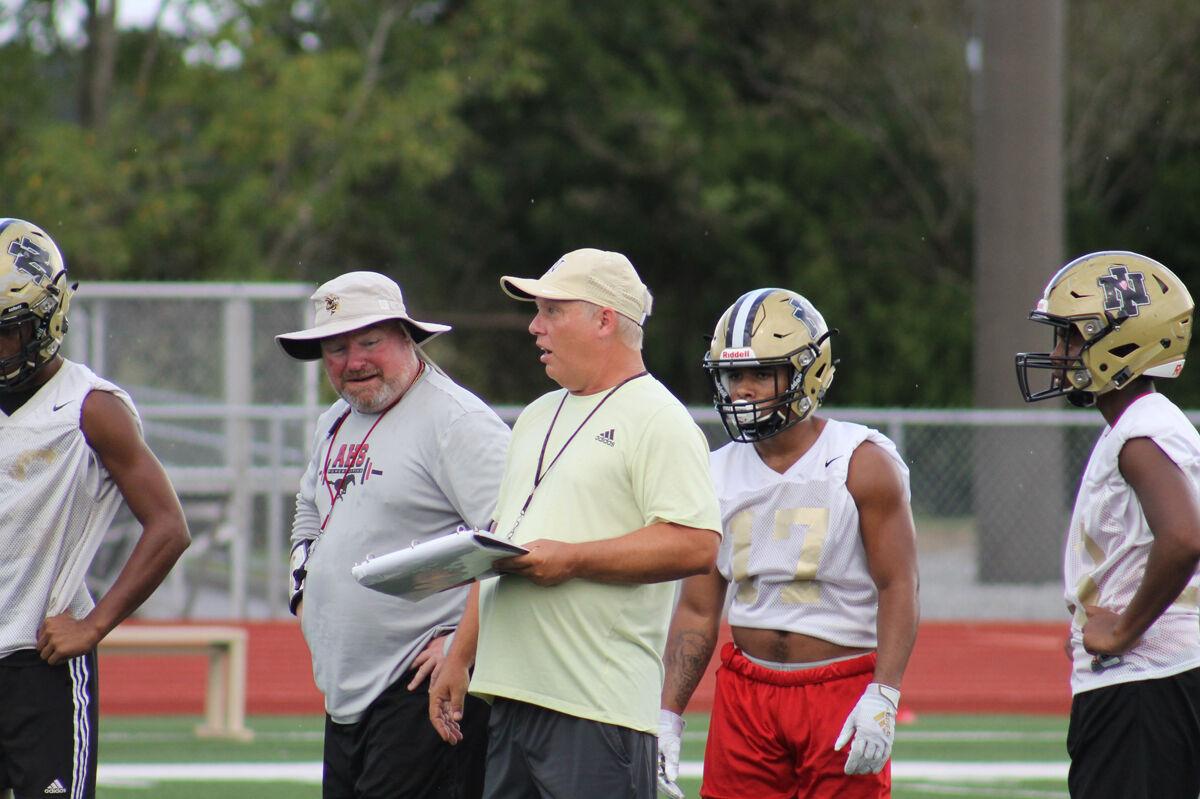 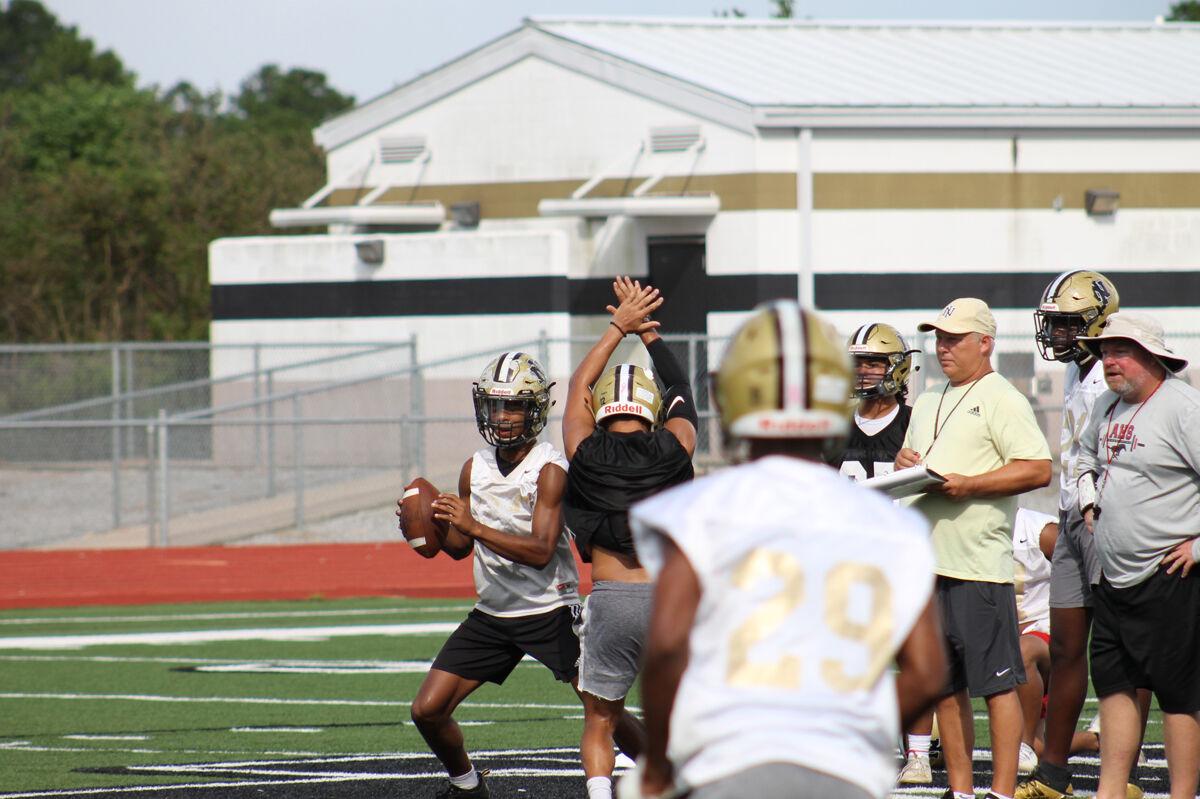 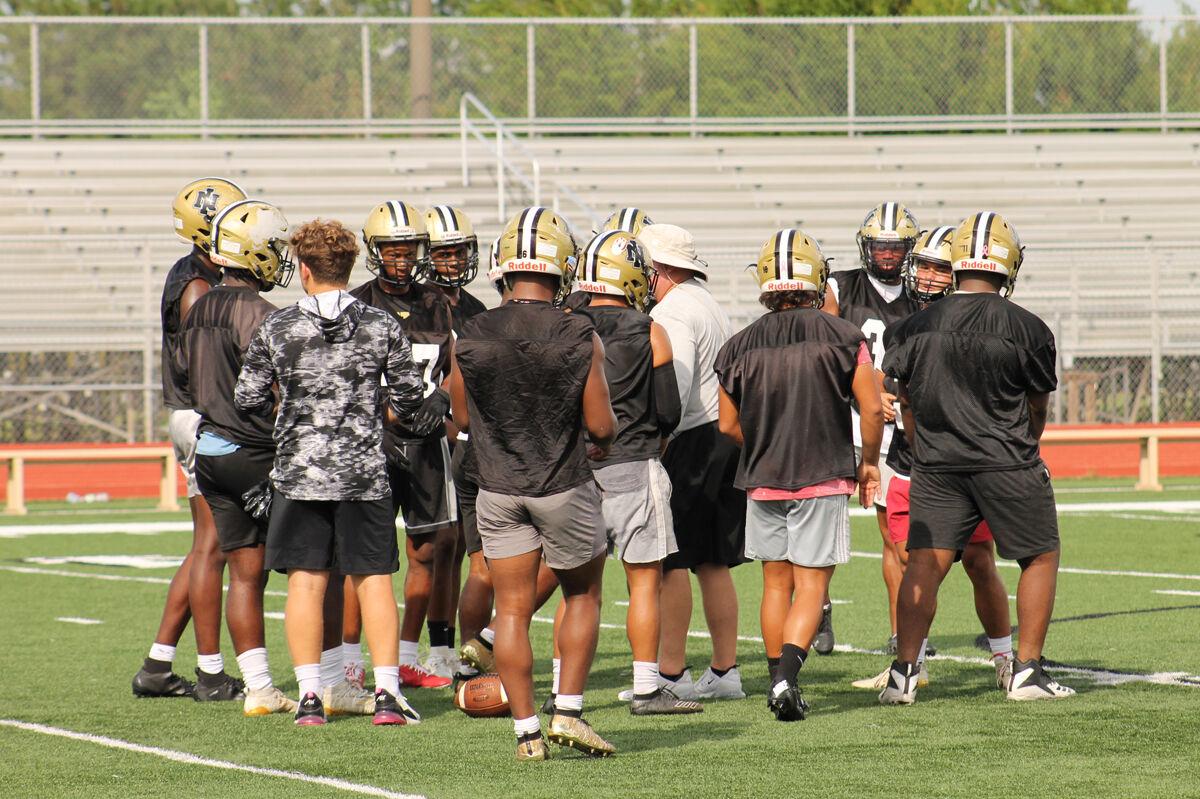 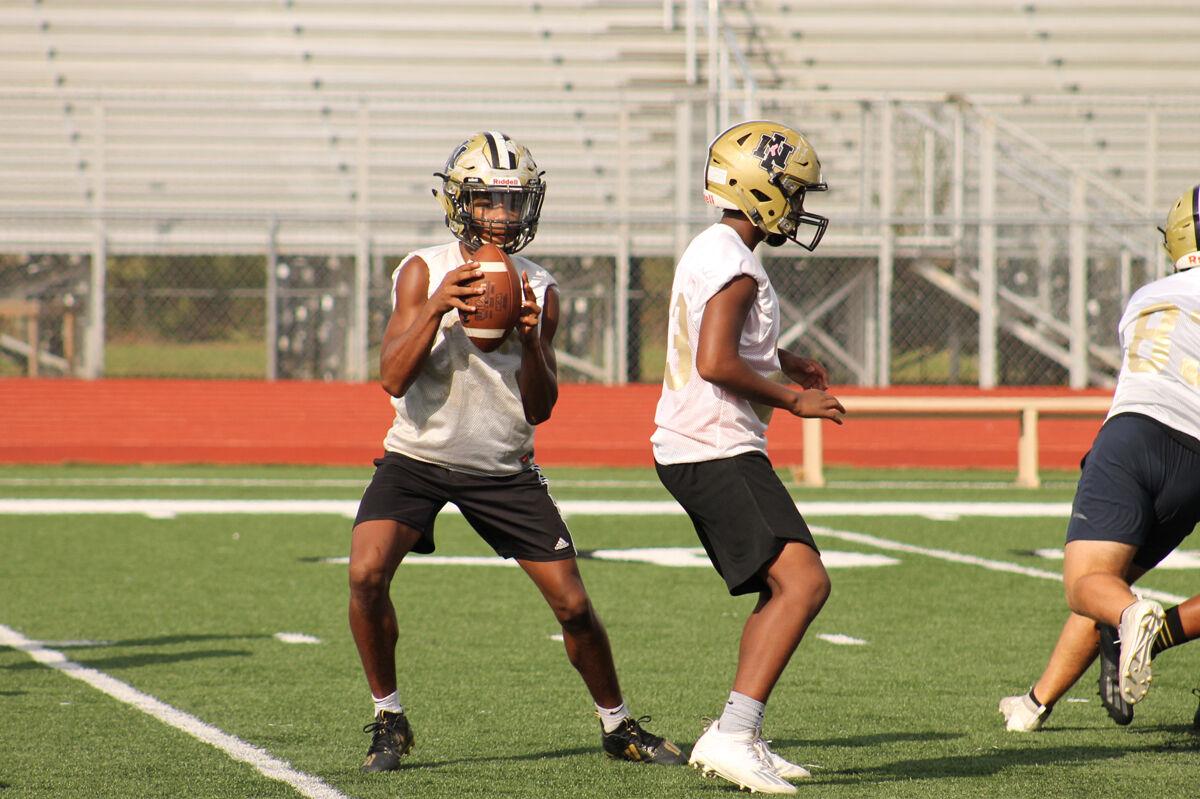 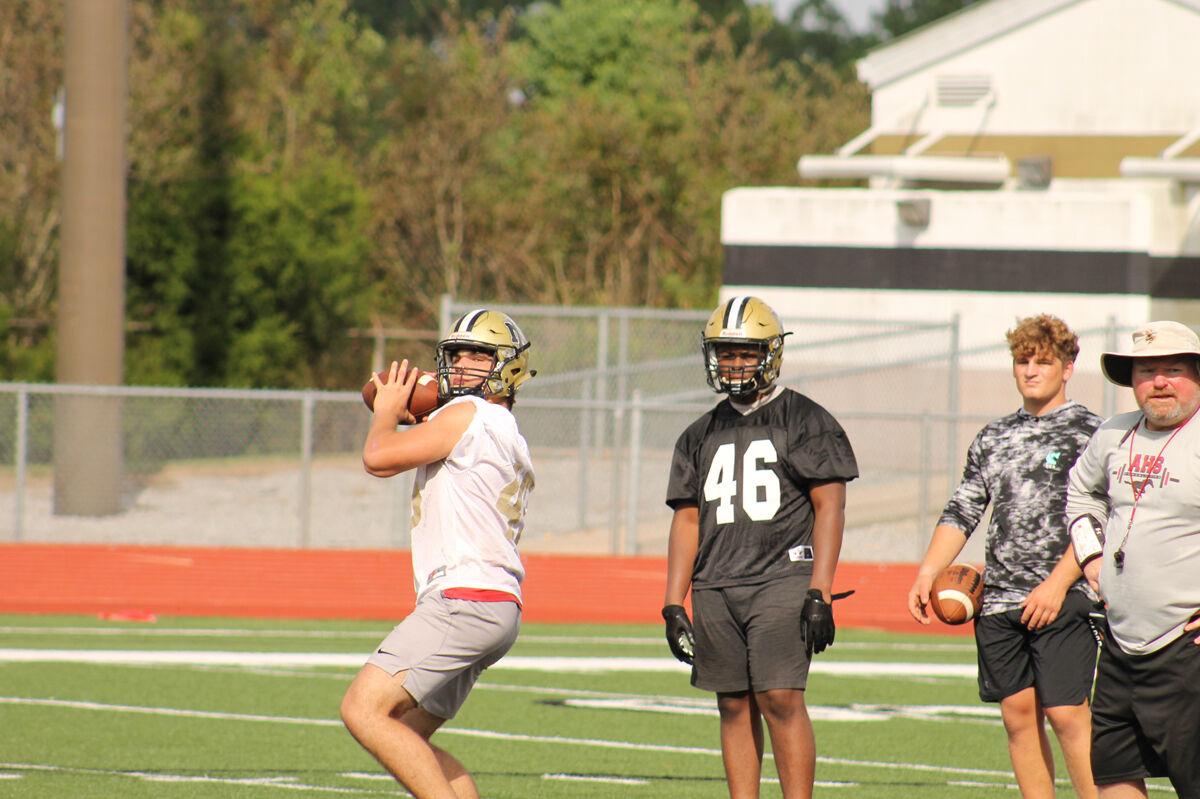 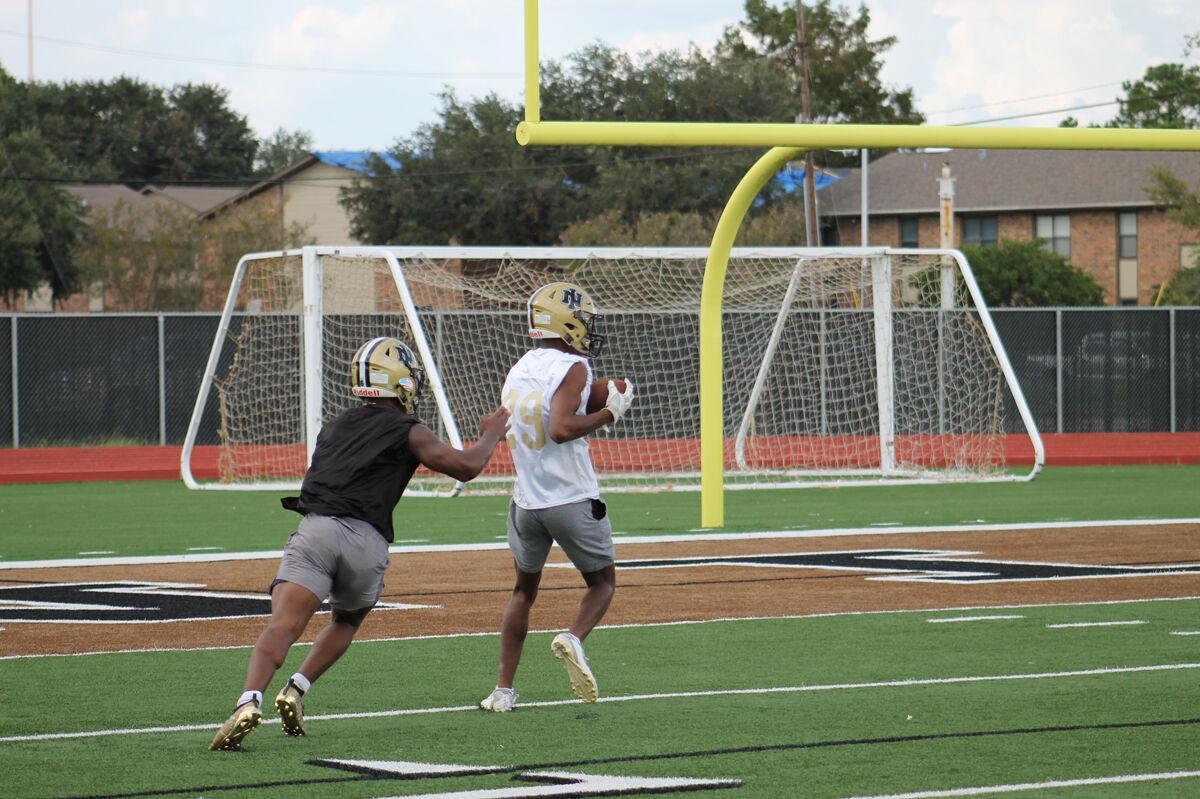 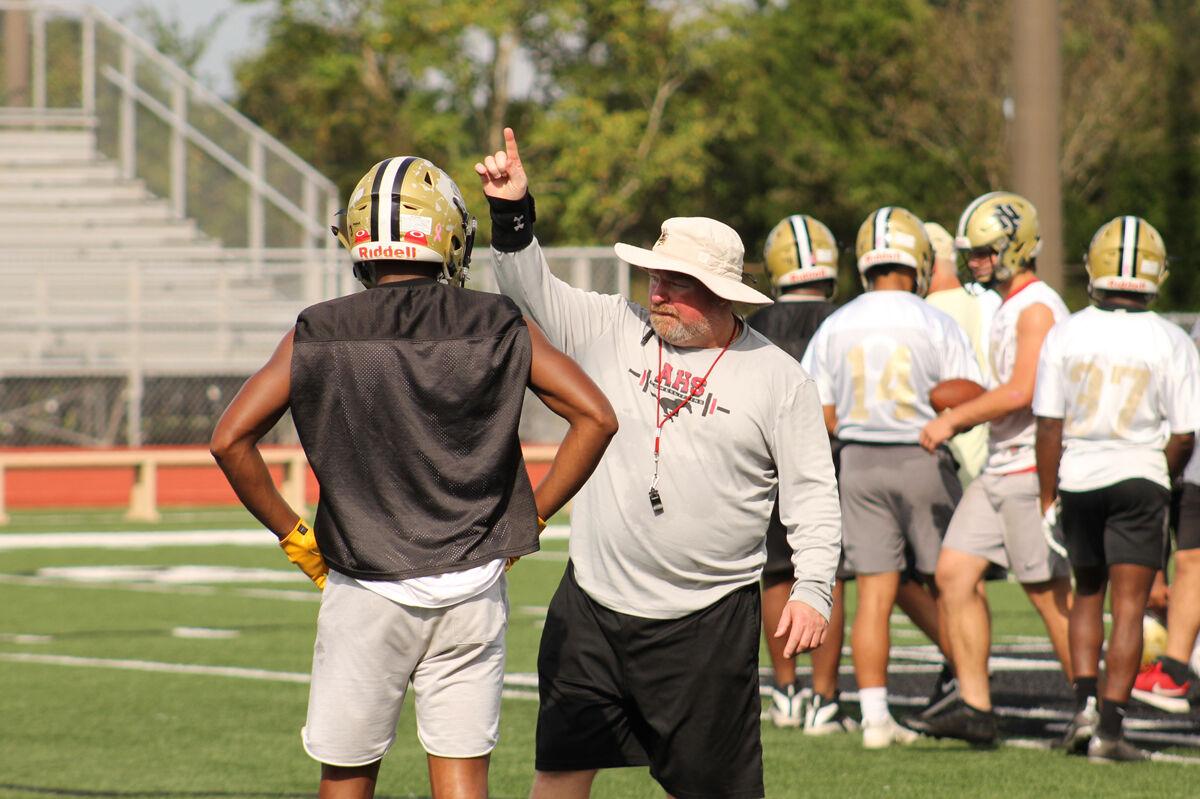 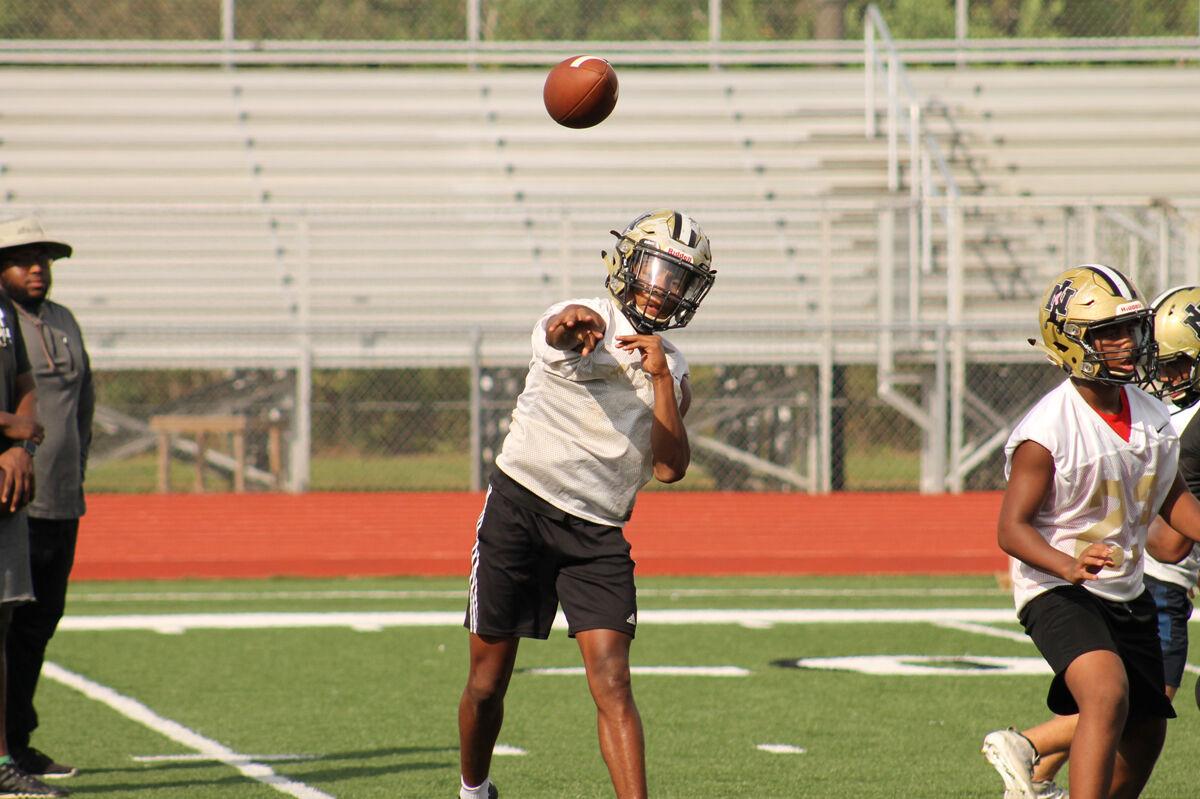 New Iberia Senior High head football coach Curt Ware, center, holds up a play for his offense during a practice this week as the Yellow Jackets prepare for the upcoming football season.

New Iberia Senior High works on passing offense and defense during seven-on-seven drills  this past week.

The run game still accounts for perhaps 75 to 80 percent of New Iberia Senior High’s Wing-T offense, coach Curt Ware said, and the Yellow Jackets are more proficient at the offense with a year of work under their belts.

In an offseason unlike any before it, the New Iberia Senior High School football team has continued to work hard under coach Curt Ware, now in his second year at the school.

The COVID-19 pandemic cut short any spring football plans with the shutdown of schools statewide, and teams began working out under strict local and state guidelines to help prevent the spread of the coronavirus.

“The kids have worked real hard through this, and we’ve had good attendance all summer long,” Ware said this week as the Yellow Jackets prepare for the season, which is scheduled to start Oct. 9. “The biggest thing I’ve preached to them is, I think we’re pretty safe over here, but it’s what you do when you’re not here that worries me about being contagious. Luckily we really didn’t have any cases over here. We’ve been really fortunate.”

The precautions and delays to the start of contact, wearing of pads and the push back of the start of the season to the third week of the normal schedule has made for a very different approach for teams.

“This is my 30th football season, and I’ve never seen anything like this,” Ware said. “Of course, nobody else has either.”

At this point teams have usually started the season, and normally NISH would be practicing four days a week. But because the lead up to the season is extended, the Jackets aren’t following that blueprint.

“We’ve never gone more than three days a week, and normally we’d be going four days a week and pushing real hard,” Ware said. “And I also gave them a week off midway through the summer, and I gave them another week off right before we thought maybe the phases would change, so they’ve had two weeks off just so they’re not tired of practice.”

NISH put pads on for the first time this week. Pads were allowed a few weeks earlier by the LHSAA, but since no contact was allowed, Ware felt it would be too tempting for players to want to hit each other with pads on.

The LHSAA recently said that regardless of the state’s re-entry phases — Louisiana was in Phase 2, with the LHSAA saying no contact could be allowed in that phase — the season would definitely be starting.

“Hopefully now we all know where we’re headed, in other words we have dates, concrete things, so it’s not just ‘well, are we even going to play?’” Ware said. “I was concerned at some point in time kids were going to decide ‘I’m tired of this.’ If you’ve got no games to look forward to, it’s not that much fun just to come out here to work.”

He hasn’t seen that, though, and he likes what he has seen of his team in practice.

“But our attitude’s been really, really good. I feel like we’ve got a chance to surprise some people. I don’t know what people think about the team, but we’ve got a lot of good kids,” he said. “Being in the second year in the system helps a lot.”

The Jackets moved from a spread offense under Rick Hutson to the Wing-T under Ware last year, a big change.

“The spread offense versus the Wing-T offense, it’s almost like it’s two different games,” Ware said. “Everything is completely different. Your steps, obviously blocking, everything’s so much different. I thought we got better toward the end of the year, but I think we’re way ahead of that right now.”

While the Wing-T is a running offense, Ware said the passing game also can be effective in the offense.

“Don’t get me wrong, obviously we’re going to be 75, 80 percent run, but if you can run the football in this offense, when you do throw it, somebody’s going to be wide open,” Ware said. “And our quarterback, who was a sophomore last year, he’s got nine games under his belt. He’s going to be much better. All the skill guys are back. We’ve got a couple of new linemen, but overall, we’ve really got a chance to do something.”

“We’ve got seven or eight guys back (starters on defense),” Ware said. “It’s the same defense as far as scheme wise, but we’ve got a new coordinator, so actually we’ll be able to do more because he’s able to just kind of do it and I don’t have to oversee it as much as last year. That helps us tremendously.”