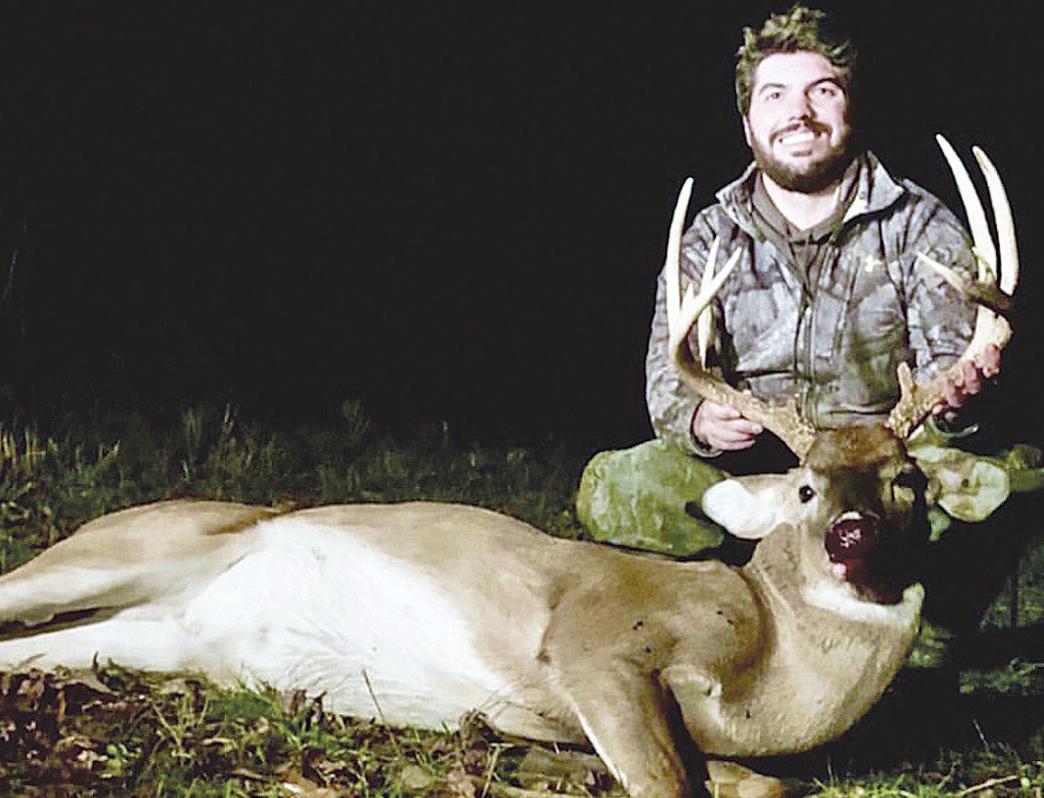 Dylan Trim of New Iberia smiles while holding the 10-point rack of an estimated 250-pound deer he shot while hunting Jan. 11 on the Kingston Ranch in Concordia Parish. Trim’s third and last buck of the season walked into view with about 15 minutes in legal shooting hours on the second-to-last weekend of the rifle season in Area 1. He downed the big buck with one shot and will have the trophy mounted by Wade Mestayer of New Iberia. 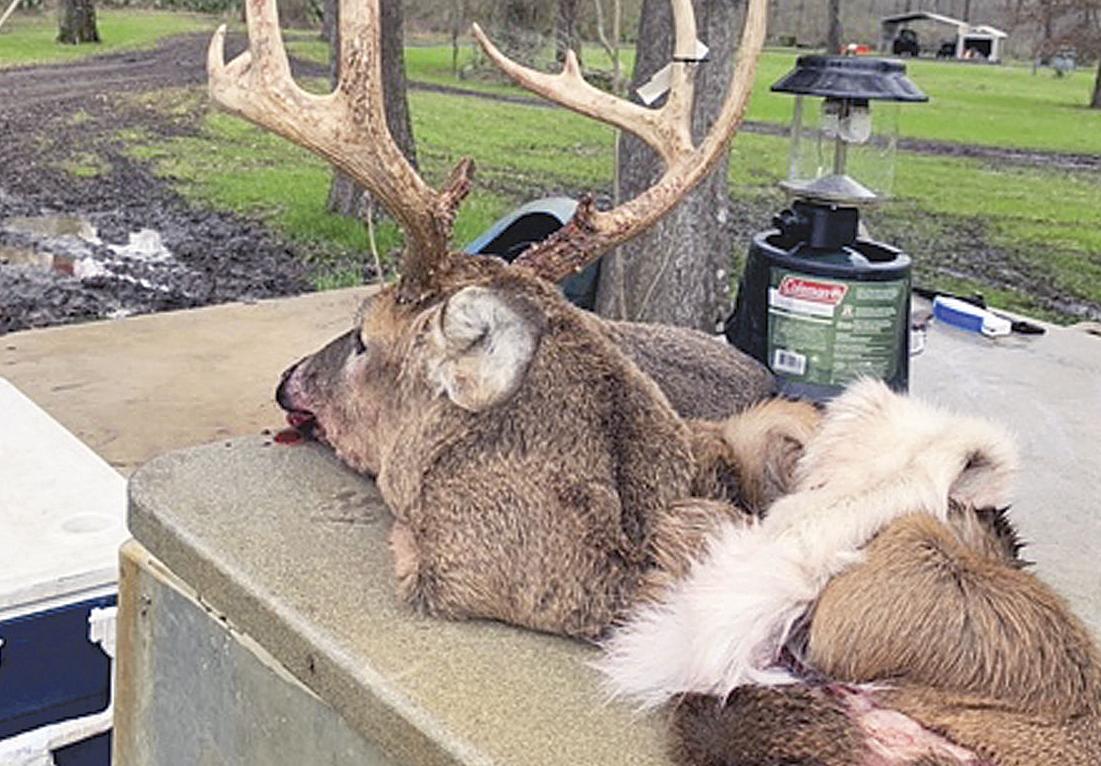 After being field dressed, the head and shoulders of a 10-point, approximately 250-pound buck were ready to be mounted by a taxidermist. Dylan Trim of New Iberia shot the deer late in the afternoon Jan. 11 at Kingston Ranch in Concordia Parish.

Dylan Trim of New Iberia smiles while holding the 10-point rack of an estimated 250-pound deer he shot while hunting Jan. 11 on the Kingston Ranch in Concordia Parish. Trim’s third and last buck of the season walked into view with about 15 minutes in legal shooting hours on the second-to-last weekend of the rifle season in Area 1. He downed the big buck with one shot and will have the trophy mounted by Wade Mestayer of New Iberia.

After being field dressed, the head and shoulders of a 10-point, approximately 250-pound buck were ready to be mounted by a taxidermist. Dylan Trim of New Iberia shot the deer late in the afternoon Jan. 11 at Kingston Ranch in Concordia Parish.

As the minutes ticked away on the legal hours to shoot deer on one of the remaining days of the 2019-20 rifle season in Area 1, a young all-around outdoorsman from New Iberia saw a “big-bodied deer” in the distance, walking in the woods toward his concealed location.

Dylan Trim was hunting deer late in the afternoon on Jan. 11 just to the west of the Mississippi River in northeast Louisiana.

“I was watching does all the hunt. It was getting dark and with 15 minutes left (legal shooting hours) I saw a big-bodied deer. It chased the does off. My blood got going. It took him two minutes to walk to (in the direction of) the stand but it seemed like two hours. I’ve got a picture of him in my scope,” Trim said this past week about the 10-point, 250-pound (estimated) buck he shot that afternoon to fill out his tags for 2019-20.

The buck ambled to within about 100 yards of Trim, who shouldered his Sako Finnlight .308-caliber Winchester Rifle. When the deer was quartering in his direction, he fired, and the bullet went through the front shoulder.

“It was about as close to dark as you can legally shoot. He flipped around but didn’t go far … still in the shooting lane,” Trim said.

The New Iberian, who was joined on the hunting trip by Cameron Gonsoulin, who is part of the sugar cane farming family at Gonsoulin Farms in Iberia Parish, waited a few minutes to leave the deer stand and look at the deer.

The size of the animal he was admiring minutes after taking it down was a pleasant surprise.

‘I wasn’t expecting it that hunt. I was very pumped, super, super enthused,” he said.

Trim’s first deer of the season was a spike he shot the last week of October just south of the Port of Iberia. His highlight before Jan. 11 was the second deer of the season, a 6-pointer he shot on Nov. 23 while hunting on the Atchafalaya Delta Wildlife Management Area near the Wax Lake Outlet.

“Yeah, I thought the 6-point was going to be my top dog for deer hunting this year. I didn’t think the Man upstairs was going to bless me with another one,” he said.

Trim confided that he hunted harder for deer this season than any previous season, including more bowhunting trips, and that overall effort encompassed every weekend, especially in the marsh. He also forced himself to be more selective, more patient, and “let a lot of bucks walk.”

“It all paid off, waiting on the right one,” he said.

The 23-year-old outdoorsman, who has been an estimator two years for Sibley Construction Services LLC in Broussard and a part-time student studying industrial technology at the University of Louisiana at Lafayette, worked as a salesman at Cajun Guns & Tackle during his high school days before graduating from New Iberia Senior High. He’s an avid hunter and fisherman juggling a full-time job and college courses after graduating from South Louisiana Community College.

Trim, the son of Drake and Dina Trim of New Iberia, shot the trophy while hunting on the Kingston Ranch near Clayton north of Ferriday in Concordia Parish. The nearly 1,600-acre spread is owned by Josh and Sheila Musso of New Iberia.

Approximately five years ago, Trim started maintaining the property for the Mussos on the high-fence ranch with more than 40 deer stands. For anyone interested, he said, Kingston Ranch, which also features a 3,000-square-feet lodge with five bedrooms and three bathrooms, is for sale and prospective buyers can call Josh at (337) 380-8934 or Sheila at (337) 519-8904.

“It’s as good as deer hunting in Louisiana as it gets. We’ll get five to seven deer of that caliber a year,” he said, talking about the big buck he shot recently.

“The place, it’s full of oak trees and surrounded by agricultural fields. It’s a deer magnet. Deer like I killed, it’s an average. There are much bigger deer running around those woods,” he said.

When that mast crop drops each fall, the ground is like a buffet table for deer.

Trim’s love for duck hunting was outlined in an advance on the special teal hunting season on Sept. 10, 2017, in The Daily Iberian. However, his deer hunting experience dates back farther than duck hunting.

“I’ve been a deer hunter since before I was a duck hunter, probably since I was 12 years old, old enough to get in the woods and be safe with a gun,” he said, noting he grew up around people who were passionate about hunting deer.

“I was hunting in a deer stand, a box stand. I park the four-wheeler about 500 yards away. I played the wind and made sure I came in where no animals could hear me. I made the walk to the stand from there as quiet as could be. I knew a big deer was around. I could see his rubs. He was in the area, rubbing big trees,” he said.

After harvesting the deer, it took the combined efforts of Trim and Gonsoulin to get it out of the woods after the sun set.

“We struggled loading him, me and Cameron. It was a two-man operation. Hard. We barely got it in the Ranger,” he said.

The trophy will be a mounted by taxidermist Wade Mestayer of New Iberia, he said.

There was no question it was a perfect ending to the deer hunting season.

“Yeah, it is. I couldn’t imagine better,” Trim said.