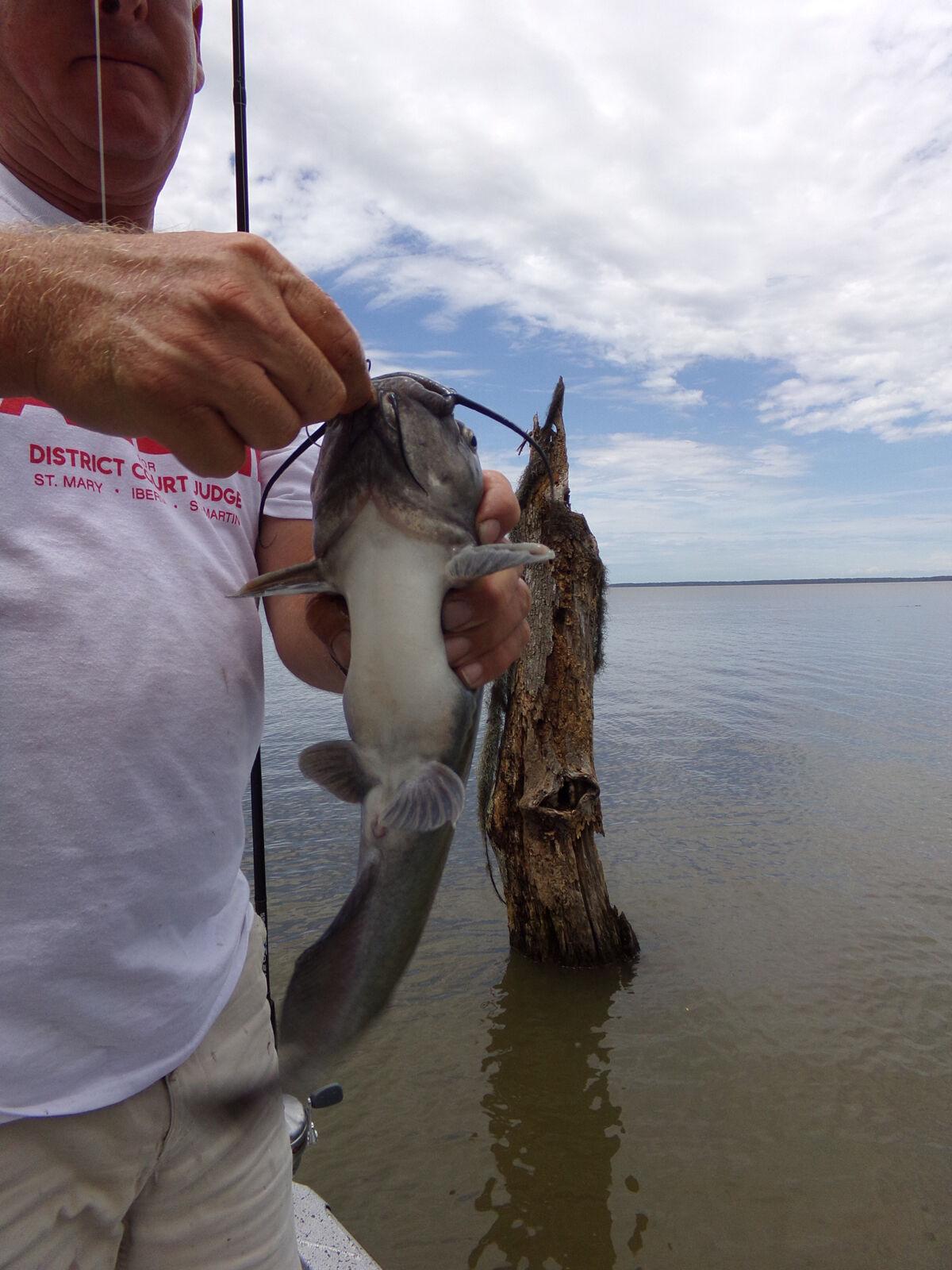 Bill McCarty unhooks a male channel catfish while fishing with half-a-worm under a cork May 28 in Lake Palourde. McCarty said catfish are spawning around the cypress trees and the spawn should last until at least mid-June. 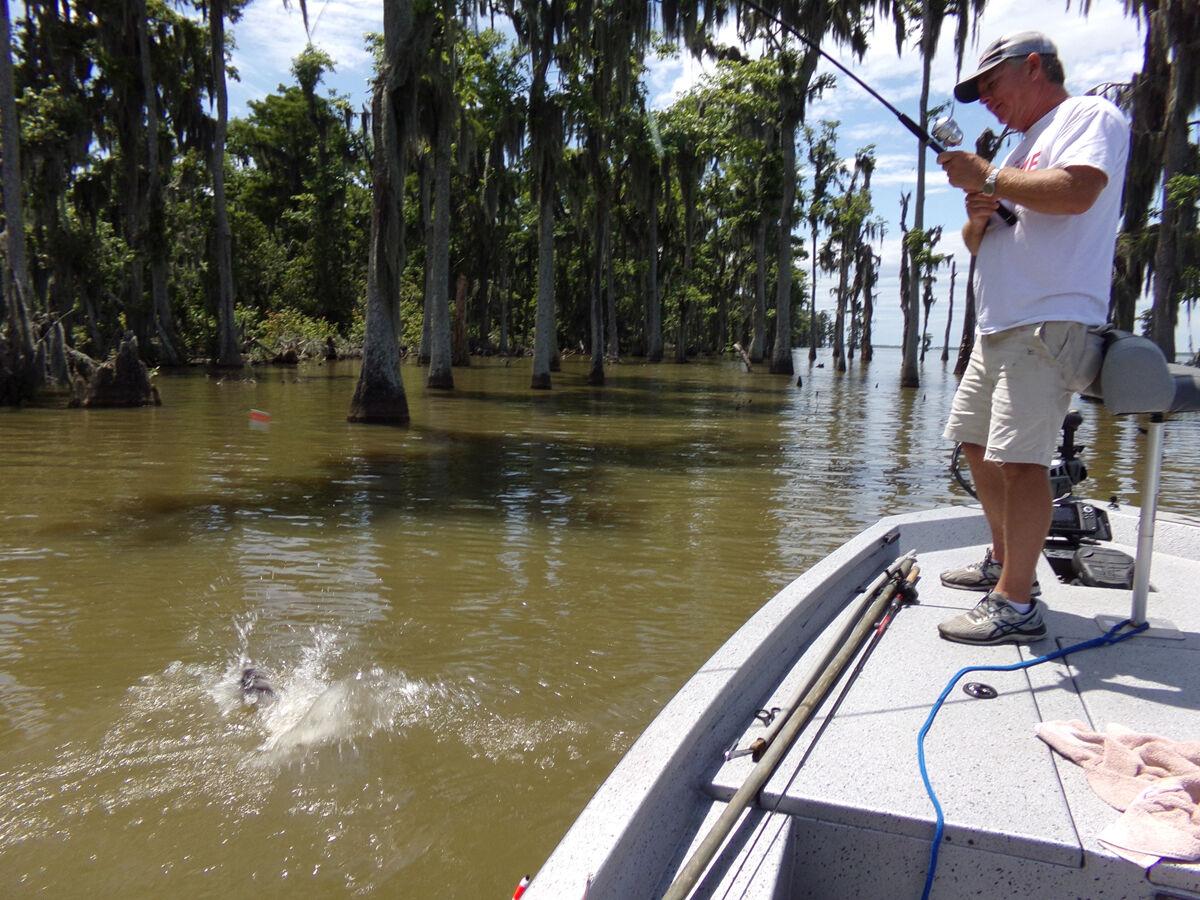 Bill McCarty unhooks a male channel catfish while fishing with half-a-worm under a cork May 28 in Lake Palourde. McCarty said catfish are spawning around the cypress trees and the spawn should last until at least mid-June.

MORGAN CITY — Catfish catching season is in full swing in the lower Atchafalaya River but it’s even better this spring around cypress trees and tupelo gum trees in nearby Lake Palourde.

Those cats are so hungry they don’t bother to nibble at an earthworm threaded on a 1/0 Gamakatsu straight shank hook tied to 10-pound test monofilament line cast by Bill McCarty, an elite bass, bream and sac-a-lait angler in Morgan City.

“They just eat,” McCarty said, pausing for effect between each word.

He proved it Friday, May 28. He’d cast that impaled worm at the base of trees. Often, the cork would sink immediately.

“It’s almost all channels in here. In the river, it’s mostly blues,” McCarty said as he began to fish.

“That’s damn fine eating right there!” he said about the 10-incher.

Mostly 1- to 1 1/2 -pound channel cats were deposited in the livewell but a few lived to fight another day when they zigged rather than zagged after the hookset and got away. He and a fishing buddy caught and kept 14 from 1-3 p.m.

The male channel cats were darker and, generally, larger than the females that bit.

McCarty has a set of catfish rods with Zebco spincast reels loaded with 10-pound test line, heavier than the 6-pound line he uses when fishing for bream. He crimps one or two small split shot(s) a few inches above the hook and fishes 2 ½- to 3-feet deep in the stained water.

McCarty and Judge Tommy Duplantier of Lafayette, 15th Judicial District Court judge, pulled 22 channel catfish averaging 1 ½ pounds from that area in Lake Palourde in no time at all May 27. They talked about those catfish while fishing for bream the following morning in Flat Lake.

“It doesn’t matter where. We were on them,” McCarty said about that previous catfishing trip to Lake Palourde.

The catfish run should extend through mid-June in Lake Palourde as well as Lake Verret on the other side of the East Atchafalaya Basin Protection Levee, McCarty said. He was an appreciative spectator recently for the catfish run in Lake Verret.

“When I went to Lake Verret a couple weeks ago, you should have seen the people doing this. It was unreal,” McCarty said about the bass fishing trip he took there during the shad spawn. He caught nearly a dozen bass but the catfish fishermen’s presence stuck out.

The smooth-skinned fish with whiskers (actually barbels that are sensory organs located around the mouth) appeals to old and young alike. They are championed for their flavorful meat, which can be fileted like other species.

Pound for pound, catfish fight hard and provide fun on the water. That’s what lures veteran fishermen like McCaty, an accomplished bass angler regarded as one of the top bream and/or sac-a-lait fishermen in and around Morgan City.

Bream bonanza about to boom in Flat Lake, albeit a tad late in ’21

MORGAN CITY — Let the records show it’s time to catch “perch,” as fishermen here call them, around cypress trees at Flat Lake in the Atchafala…