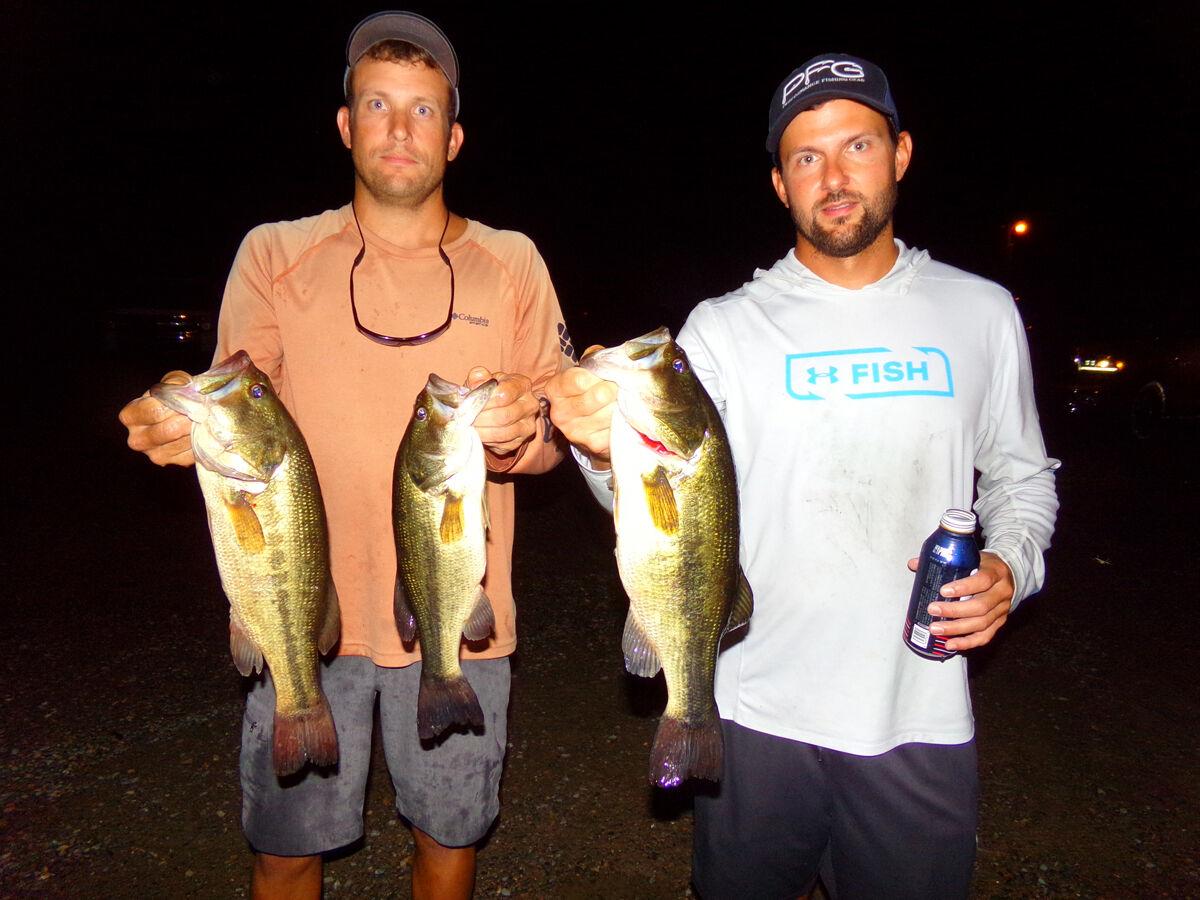 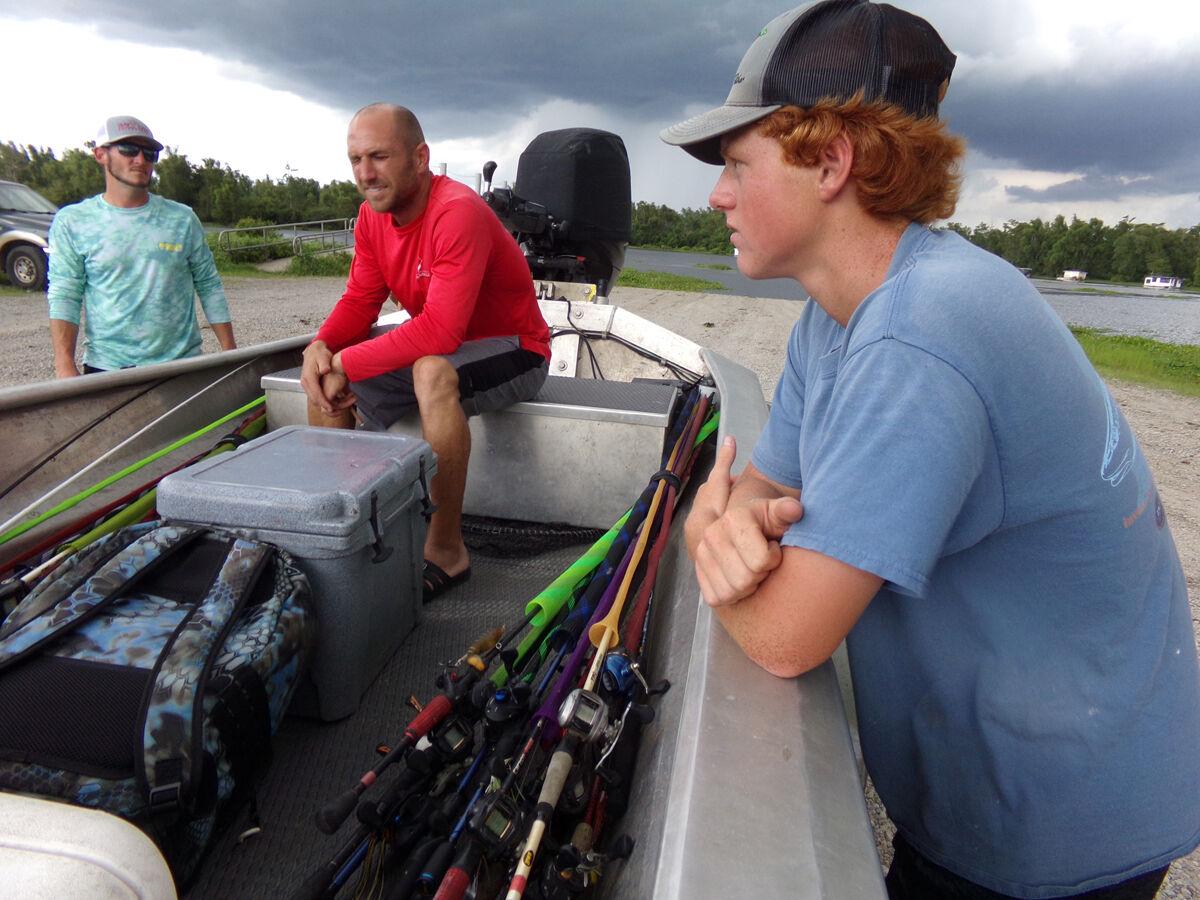 As storm clouds mass in the distance, Chase Boudreaux, left, and Andre Weber chat with Gordy Bourque before the start of this past week’s Wednesday Night Hawg Fights Bass Tournament Series contest at Bayou Benoit Boat Landing in the Atchafalaya Basin. Boudreaux and Bourque fished together and Weber fished with Hunter Neuville.

As storm clouds mass in the distance, Chase Boudreaux, left, and Andre Weber chat with Gordy Bourque before the start of this past week’s Wednesday Night Hawg Fights Bass Tournament Series contest at Bayou Benoit Boat Landing in the Atchafalaya Basin. Boudreaux and Bourque fished together and Weber fished with Hunter Neuville.

Ryan Latch teamed with Chris Snelling of Youngsville on Wednesday to bring back a three-bass limit weighing a whopping 9.26 pounds to handily beat the rest of an 18-boat field that fished out of Bayou Benoit Boat Landing. Latch’s first-place finish came four days after he and Blake Landreneau were third with 14.94 pounds on July 10 in a fundraising tournament out of Myette Point Boat Landing for Hunter Neuville and Aaron Neuville (see related story on this page).

The 35-year-old Latch, who runs logging tools for Expro, an international oilfield services company, said he almost didn’t fish his first WN Hawg Fights BTS tournament of 2021. He knew after the 8:45 p.m. weigh-in he’d have to leave to go offshore at 1:45 a.m.

“I’m glad I was able to go,” Latch said in an understatement.

Landreneau, Latch’s tournament partner Saturday, was unable to fish Wednesday. Snelling, who works in anchoring for Delmar Systems, stepped in and they collected $405.

Latch also changed fishing locations, choosing one of his favorite areas closer to the boat landing than running to the spot where he cashed in with Landreneau on Sunday.

“I wish we would have gone there (Wednesday’s honey hole) on Saturday if I knew they were biting that good,” Latch said with a chuckle.

“I actually went there before the Saturday tournament but the fish were small. I didn’t think anything of it. I’m glad they grew up last night.”

The winning weight and the fact 13 of 18 boats had limits belied the fact the Atchafalaya River stage at Butte La Rose was on the way up for days before it leveled off near 12.0 feet on July 9. An Atchafalaya Basin on the rise generally isn’t a bass angler’s friend.

Veterans Carroll Delahoussaye and Danny Bulliard, both of St. Martinville, showed out, as they say in some bass tournament circuits, with three bass weighing 7.29 pounds, including a 4.17-pounder worth $90. Their second-place finish was worth $243.

Brad Romero of New Iberia and Damein Clements of Abbeville were third with three bass that tipped the digital scale to 7.05 pounds for $162.

Latch and Snelling made the right moves in a fairly confined area with plenty of duckweed. They flipped a crawfish-style creature bait and “walk-the-dog” topwaters to trigger the right bites.

“They were actually roaming out in the middle after all the boats passed, in the duckweed,” Latch said.

The winners culled once and caught two other keepers that didn’t help. Still, they were surprised at the winning weight.

“We really lowballed that. We thought we had high 7s or low 8s. We knew we had to catch ’em, knew who we were fishing against. You guys catch them all the time,” Latch said.