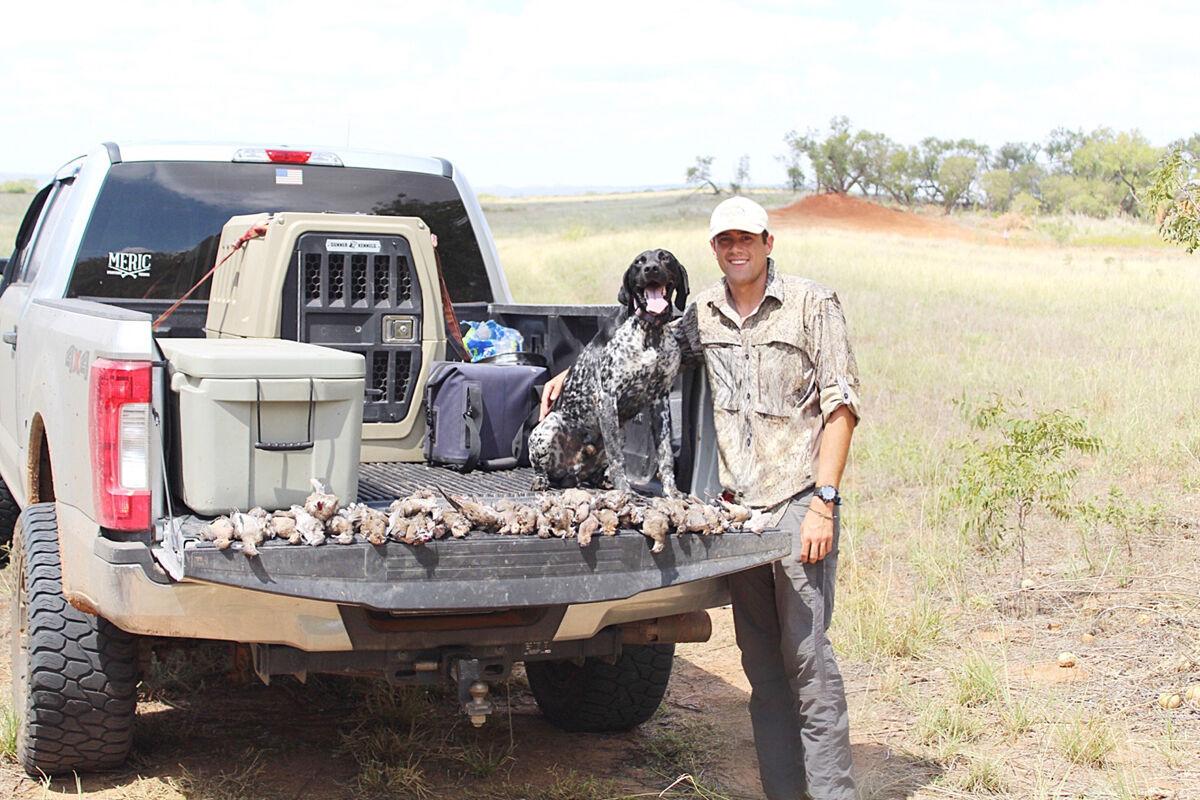 Three limits of freshly killed doves are lined up Sept. 5 on the tailgate in front of Axel, a three-year-old German short haired pointer who made the trip to upper central Texas with its owner, Saint Schwing of New Iberia. Schwing is smiling following another highly successful day of dove hunting with buddies Travis Williams of Hermitage, Arkansas, and Texan Drake Everett. Schwing and Williams had another successful dove hunt in the region Sept. 2. 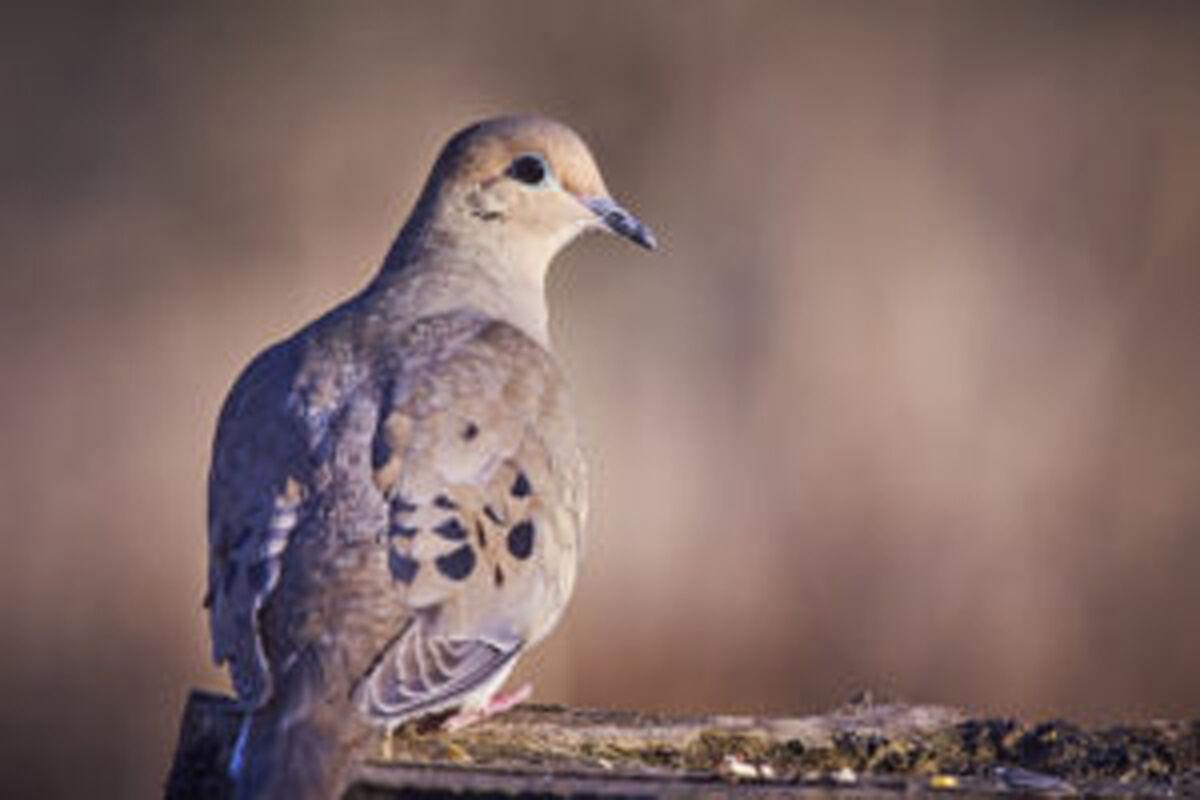 Mourning doves like this one are prolific in Texas, particularly in northern Texas where Saint Schwing of New Iberia hunted Sept. 2, 4 and 5.

Three limits of freshly killed doves are lined up Sept. 5 on the tailgate in front of Axel, a three-year-old German short haired pointer who made the trip to upper central Texas with its owner, Saint Schwing of New Iberia. Schwing is smiling following another highly successful day of dove hunting with buddies Travis Williams of Hermitage, Arkansas, and Texan Drake Everett. Schwing and Williams had another successful dove hunt in the region Sept. 2.

Mourning doves like this one are prolific in Texas, particularly in northern Texas where Saint Schwing of New Iberia hunted Sept. 2, 4 and 5.

JUD, Texas — As soon as a New Iberia outdoorsman shot a “scotch double” while dove hunting farm country in upper central Texas, he looked around for witnesses.

“I said, ‘I have two witnesses, right?’ ” Saint Schwing said, proudly, softly chuckling at the memory from the Sept. 5 dove hunt in the state’s North Zone.

That shot was one of three “doubles” he registered four days after dove hunting opened Sept. 1 in the Lone Star State. This one was special because he bagged two birds with one blast from his shotgun.

Schwing, 22, a Catholic High School graduate who was a standout strongside linebacker for the Panthers, was hunting doves with his buddy, Travis Williams, of Hermitage, Arkansas, and Texan Drake Everett. There was grudging respect and, perhaps, a tinge of jealousy for the shot that killed two doves.

“They were flying across all of us. My two buddies were actually counting birds (as the trio was getting close to the limit). They said, ‘Saint, in front!’ I looked and they were flying in front of the MOJOs. They were about 30 yards away. I thought I was going to miss both of them,” he said.

Schwing missed very few doves that day and Sept. 2, the day after the season opened, when he and Williams limited out while hunting an area right outside Haskell and Rochester. Besides that Wednesday and Saturday, they also hunted doves Friday, Sept. 4, but dropped only 18 or so.

The dove hunters gave his German short-haired pointer, Axel, a workout as the retriever covered ground in Texas.

Dove hunting opened in Schwing’s home state on Sept. 5. Few, if any, Teche Area outdoorsmen take part in opening weekend, one that is much more popular in northern Louisiana.

He wanted to “knock off the rust,” as he put it, because he hadn’t shouldered either of his two shotguns on a hunt since the spring turkey hunting season in Oklahoma and its neighbor to the north, Kansas. Apparently, Texas affords plenty of wing shooting opportunity to knock off the rust.

Texas A&M AgriLife Extension Service official John Tomacek, Ph.D, a wildlife specialist, said in late August that he expected a “promising number of dove in flight” as the season kicked off.

Owen Fitzsimmons, Texas Parks and Wildlife Department dove program leader, reported “ripe conditions for a fruitful season” in his 2020 dove season forecast released Aug. 25. Fitzsimmons noted 2020 dove surveys were canceled due to the coronavirus pandemic but noted Texas has a breeding population of 25 million mourning doves and up to 15 million white-winged doves. Those number increase as doves migrate into the state from other areas in the flyway.

Timing hunts around seasonal weather changes such as cold fronts enhance dove hunting opportunities, he pointed out. Doves concentrate in bigger fall flights ahead of fronts, he said.

“These groups will often feed heavily in one area for a few days before moving on. Hunters should look to take advantage of any fronts during the season,” Fitzsimmons said.

Schwing, the son of Armond and Jennifer Schwing, capitalized on a weather change while hunting wheat fields, milos and “water sources.

“What we call a pond they call a tank. That’s where we had most of our success,” he said.

“Ah, there’s a bunch of birds and we had a cold front come through while we were up there and that pushed new birds from Oklahoma,” he said.

He alternately shouldered either his Binelli 20-gauge or his 12-gauge, a Super Black Eagle 2, on the dove hunting trip.

“I bring both of them out there,” he said.

Schwing, who also hunts doves later in the season in the Winnsboro area with another friend, Brandon Chapman, was getting the shotguns warmed up for the special teal hunting season that opened Saturday in the Sportsman’s Paradise. Unfortunately, he wouldn’t be gunning this opening weekend because a friend scheduled a bachelor’s party trip that conflicts with one of the most popular seasons across the state.

“Go figure. Who would have bachelor trip on opening weekend?” he asked rhetorically, noting his father taught him better than to do something like that.

Schwing said he usually hunts teal in the Grand Chenier area as well as some “family ponds” in the Loreauville and Catahoula areas.

Alas, he said, his teal hunting during this year’s special season will be after the bachelor trip, “for sure.”

“I’m looking forward to it, no doubt,” he said.

He recently returned to his hometown from Ruston, where he studied at Louisiana Delta Community College, he said. He plans to finish his two remaining years in the U.S. Marine Corps Forces Reserve, then work full-time.

And keep on hunting.