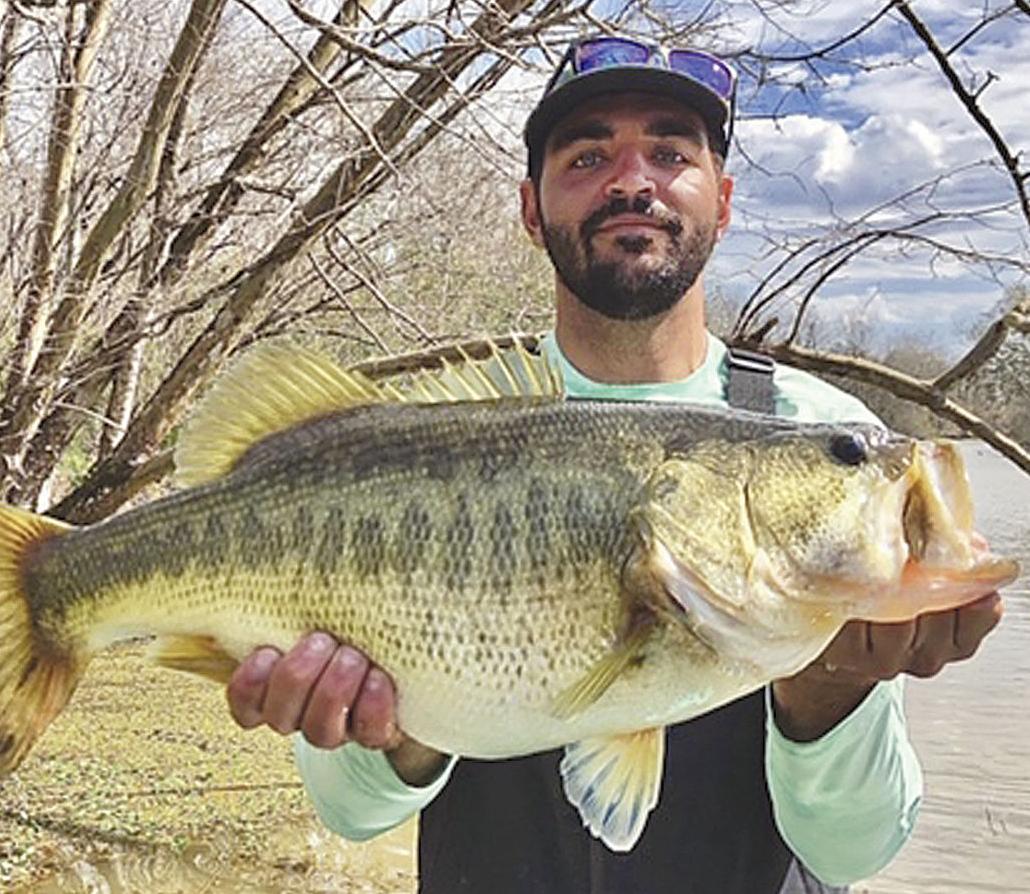 Joseph Martin, 23, of Baton Rouge hoists an 8.17-pound bass he caught around midday Feb. 15 while fishing at Lake Fausse Pointe. Martin was on the water with his high school buddy,  Austin Whiteker of Baton Rouge. The ‘hawg’ bit on a chartreuse/blue Strike King KVD 1.5 crank  bait in the Texaco Field, Martin said about his personal best bass. 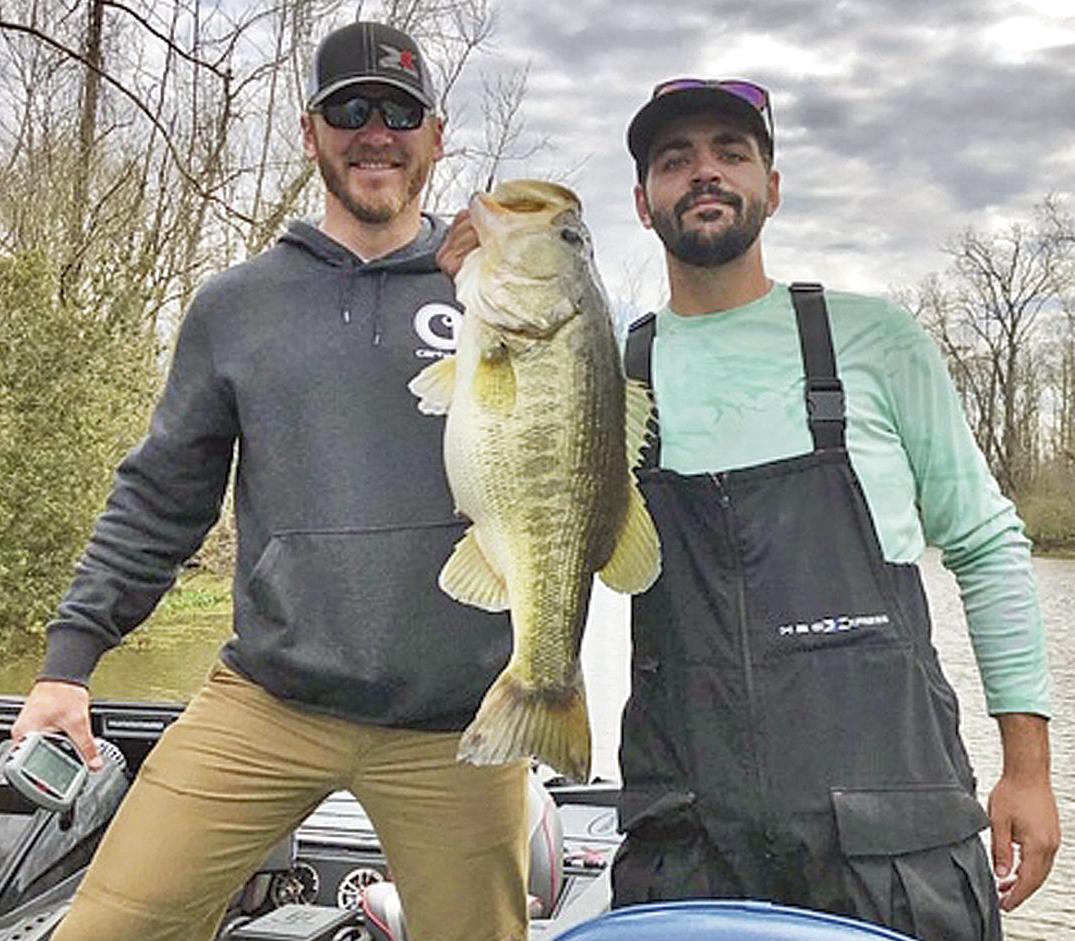 Caleb Sumrall, left, weighed Joseph Martin’s bass, then posed for a photo with Martin and the ‘hawg.’

Joseph Martin, 23, of Baton Rouge hoists an 8.17-pound bass he caught around midday Feb. 15 while fishing at Lake Fausse Pointe. Martin was on the water with his high school buddy,  Austin Whiteker of Baton Rouge. The ‘hawg’ bit on a chartreuse/blue Strike King KVD 1.5 crank  bait in the Texaco Field, Martin said about his personal best bass.

Caleb Sumrall, left, weighed Joseph Martin’s bass, then posed for a photo with Martin and the ‘hawg.’

LOREAUVILLE — A 23-year-old Baton Rouge bass angler was floating on Cloud Nine on Feb. 15 with his hands gripping an 8-pound plus bass, the biggest bass of his bass fishing career.

A few minutes later Cloud Nine got even bigger and bigger for Joseph Martin. One of the bass fishing pros Martin admires most confirmed he had a scale and agreed to weigh the trophy-sized bass in that muddy canal inside the Texaco Field at Lake Fausse Pointe.

Bassmaster Elite Series pro Caleb Sumrall of New Iberia, who was enjoying a family outing on the water before the Bassmaster Classic on March 6-8, had just roared into the canal in his new Xpress X21. After checking for a scale with a fisherman in another boat, Martin put the trolling motor on his 1994 Blazer on top speed to make a beeline for Sumrall. A dream come true was developing while fishing with his high school friend, Austin Whitaker of Baton Rouge.

“I told my buddy, ‘Is that a wrapped Xpress?’ He said, ‘Yeah, it looks like an aluminum boat with a bunch of stickers on the side.’ I’m a big fan of the Bassmaster Elite Series and pro bass fishing,” Martin said Monday, noting the third-year bass pro was idling down the canal, away from them, at the time.

Before Martin got to the boat he knew it belonged to Sumrall, who was fishing that day with his wife, Jacie, daughter, Clélié,  and son, Axel. The Baton Rouge bass angler, who was prefishing for a Fishers of Men National Tournament Trail event held Saturday, asked if the bass pro had a scale. Sumrall did and readily weighed the bass, which tipped the scale at 8.17 pounds.

“To have him randomly idle by me while I’m looking for a scale” was an unbelievable coincidence, or fate, Martin said.

He had Whitaker take a few photos of him and the big bass, then turned to Caleb. He asked the Elite pro to pose with him and the “hawg” after trolling over to a couple trees along the shoreline as to shield the canal’s identity at least a little.

Sumrall gladly obliged. Whitaker snapped that photo, too, at 12:20 p.m.

Then Martin got back on the trolling motor to go release the bass at the exact spot it was caught. He had measured it at 22 ¼ inches, noting the tail extended ¼-inch past his 22-inch golden rule, and he took some braided line, pressed one end on the fish and went around to measure the girth, cut it where it met up and saw it was 18 1/2 inches around.

“I wanted to get it back in the water,” he said.

Sumrall said, “That was a pretty fish for sure. Very healthy.”

The bass was a fat fish, full of eggs in the prespawn period. He believed it was staging at the cover away from the shoreline when he got it to bite that Saturday.

It was high noon when the big bass mouthed a chartreuse/blue Strike King KVD 1.5 crank bait he retrieved along a piece of structure 20 yards from shore. The action, which was slow with only two small bass caught since launching at Lake Fausse Pointe State Park, got real in a hurry.

Martin had just caught the second small bass when he started working the structure. His Strike King KVD 1.5 chartreuse/blue crank bait’s path took it up against the wood away from the bank.

“I said, ‘Let me make one more bomb cast.’ I bounced it off the structure and felt it, you know, load up on it. It was fighting hard, hard. I said it was a goo (gaspergoo, a freshwater drum) or catfish. It came up about 15 yards away. I saw it wasn’t a catfish. I saw silver. I still thought it was a goo,” he said.

When Martin got a better look at it, he realized it was a “hawg.”

“I started hollering for the net. It was under four tackle bags and eight or nine of Austin’s rods,” he said.

Whitaker sorted out the tangle on the bottom of the boat, got the landing net out cleanly and scooped up the big, big bass with no trouble. It was hooked solidly with at least two barbs from each treble hook inside the mouth under the top lip, Martin said.

The anglers feasted their eyes on the bass, appreciating how fat it was, how long it was, how beautiful it was.

“When we got it in the boat, we started hollering,” Martin said.

Since then, he said, his cell phone “has been blowing up.”

“I’ve got people texting me, people on Facebook. I’m like, ‘How’d the word get out in two days?’ I told a few people Fausse Pointe. Right away one of the guys said, ‘Texaco Field,’ ” he said.

His previous biggest bass was caught in the lake March 3, 2018. It weighed a little more than 6 pounds, he said, when he caught it near the stump field in the farthest borrow pit from the state park along the West Atchafalaya Basin Protection Levee. That was nearly two years and about 80 pounds ago for Martin, who weighs in “now at a buck 80,” he said with a chuckle, proudly.

“Man, I don’t fish it that often. I hit it hard in February. I know that’s the opportunity to catch one over 6,” he said, adding he was looking around that Saturday for a backup destination for the Fishers of Men tournament out of Doiron’s Landing, Stephensville.

Martin has family ties to Iberia Parish. His great-grandmother was a Freyou, he said, and his grandfather, Henry Martin, was born in New Iberia and raised on Freyou Road.

After the big catch, the avid B.A.S.S. Nation angler was happy but he wasn’t giddy or overwhelmed.

“Honestly, I don’t think I was shaking. I’ve been fishing at least two, three times a week since I could drive,” he said.

A few days later, though, he was proud of the trophy-sized bass and the fact it was weighed by one of his idols, who also took a photo with him and the big’un.