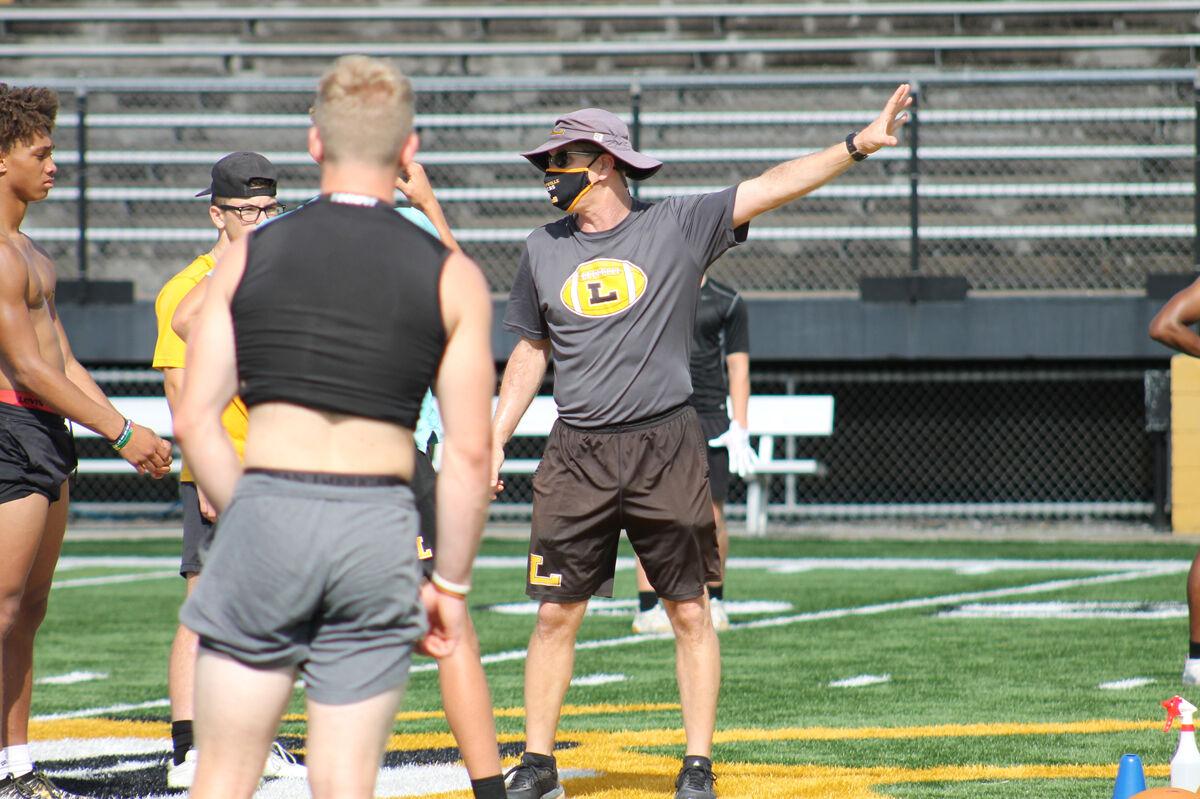 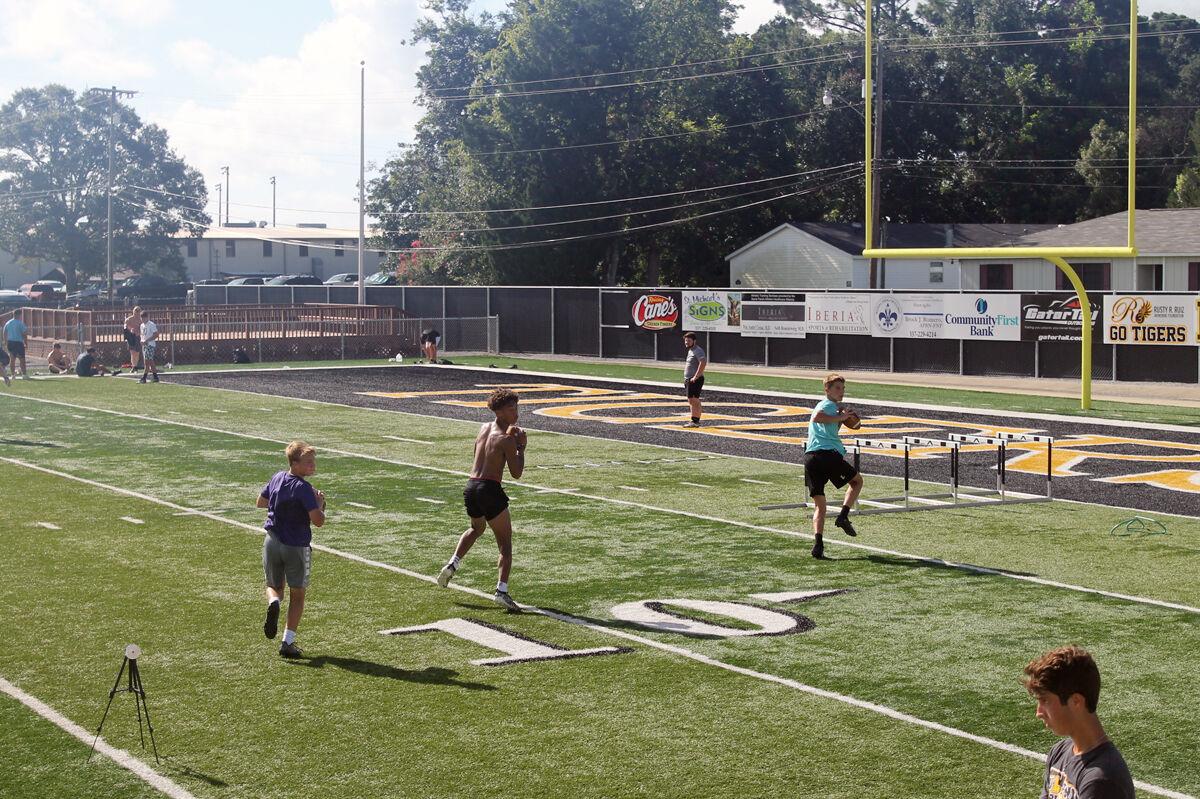 Loreauville High quarterbacks work on their footwork while spaced apart for safety purposes on Wednesday. 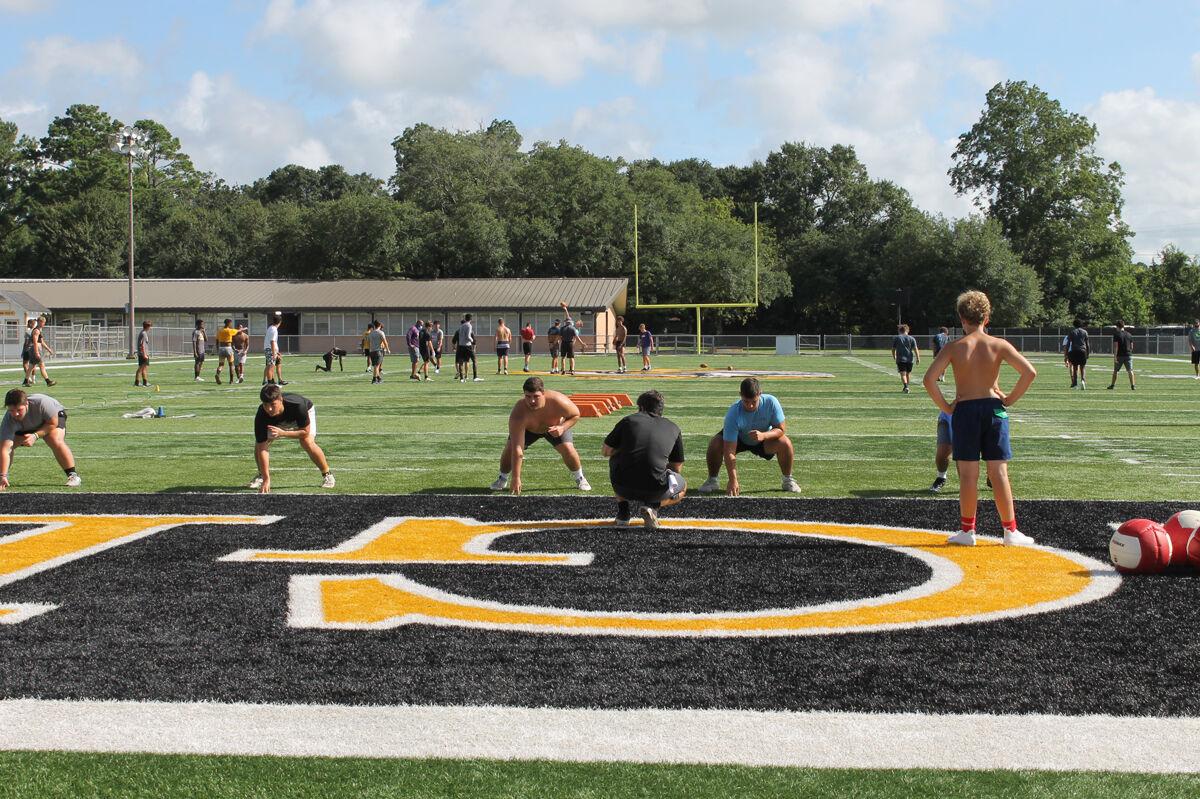 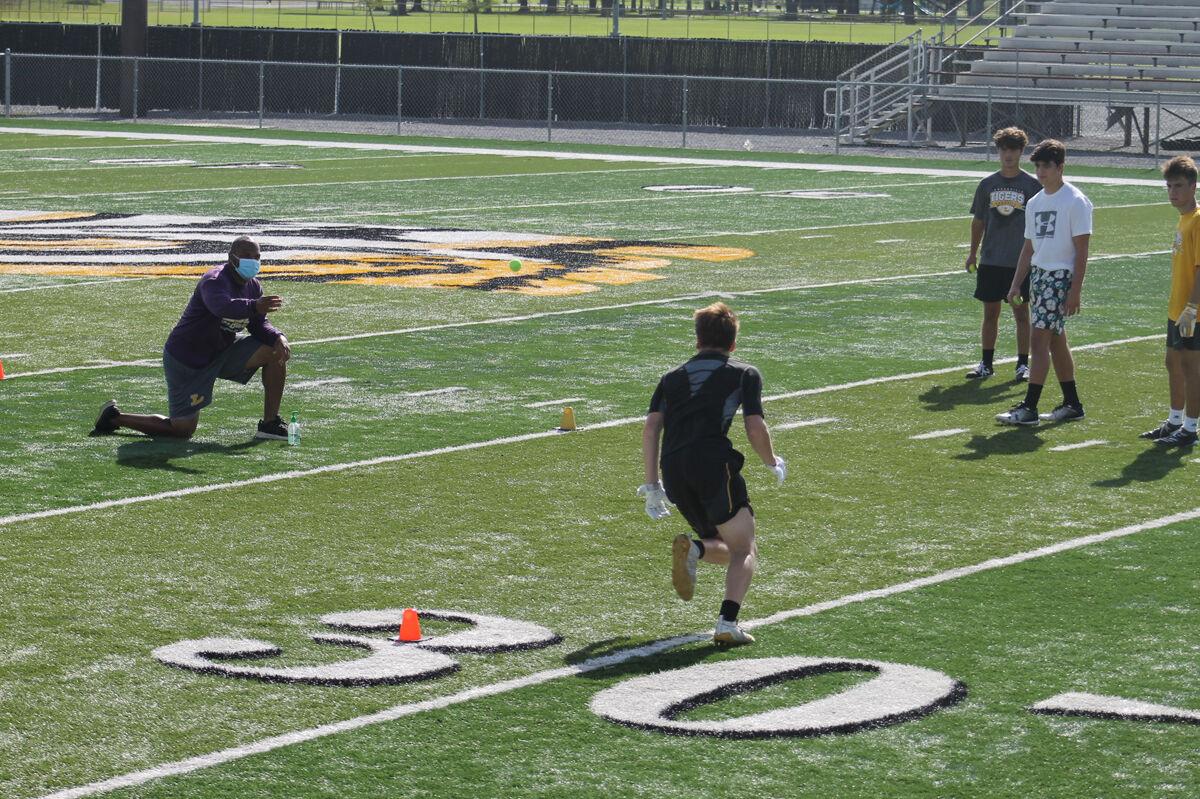 Loreauville High assistant coach Rhamad Lewis works with receivers, throwing a tennis ball for them to catch as they run their routes on Wednesday. 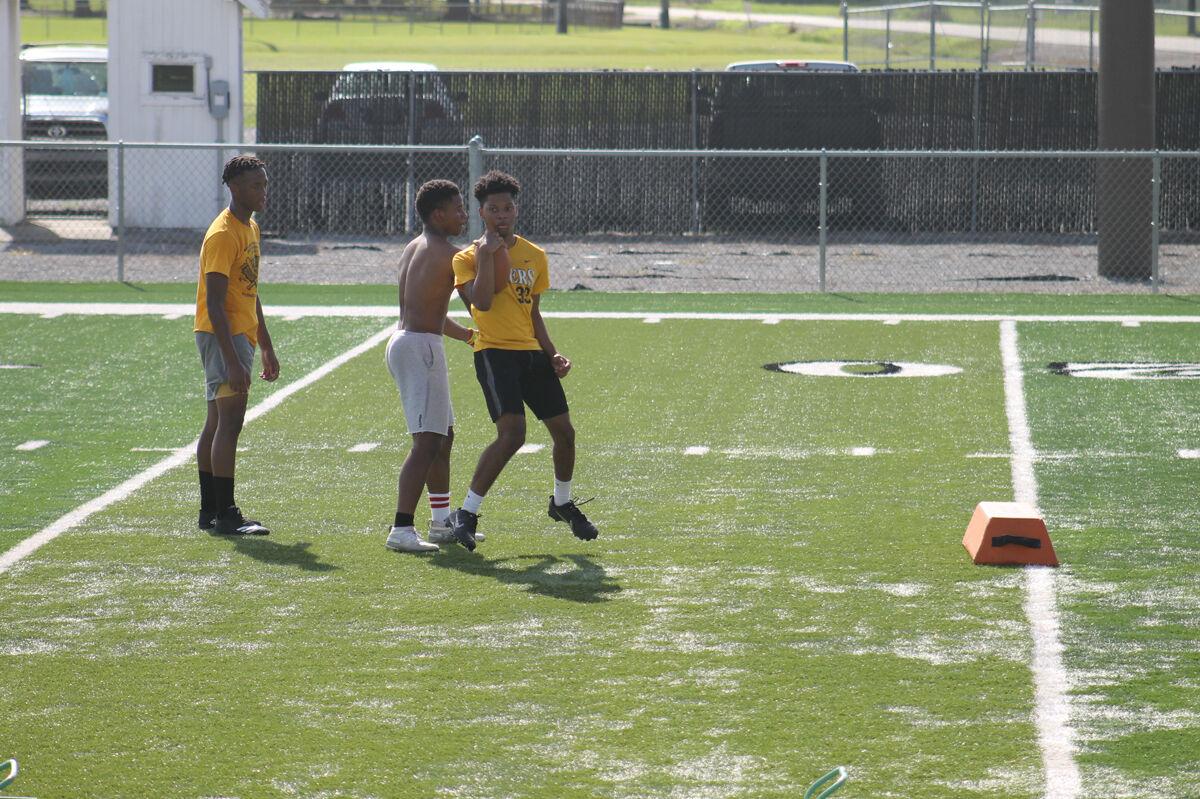 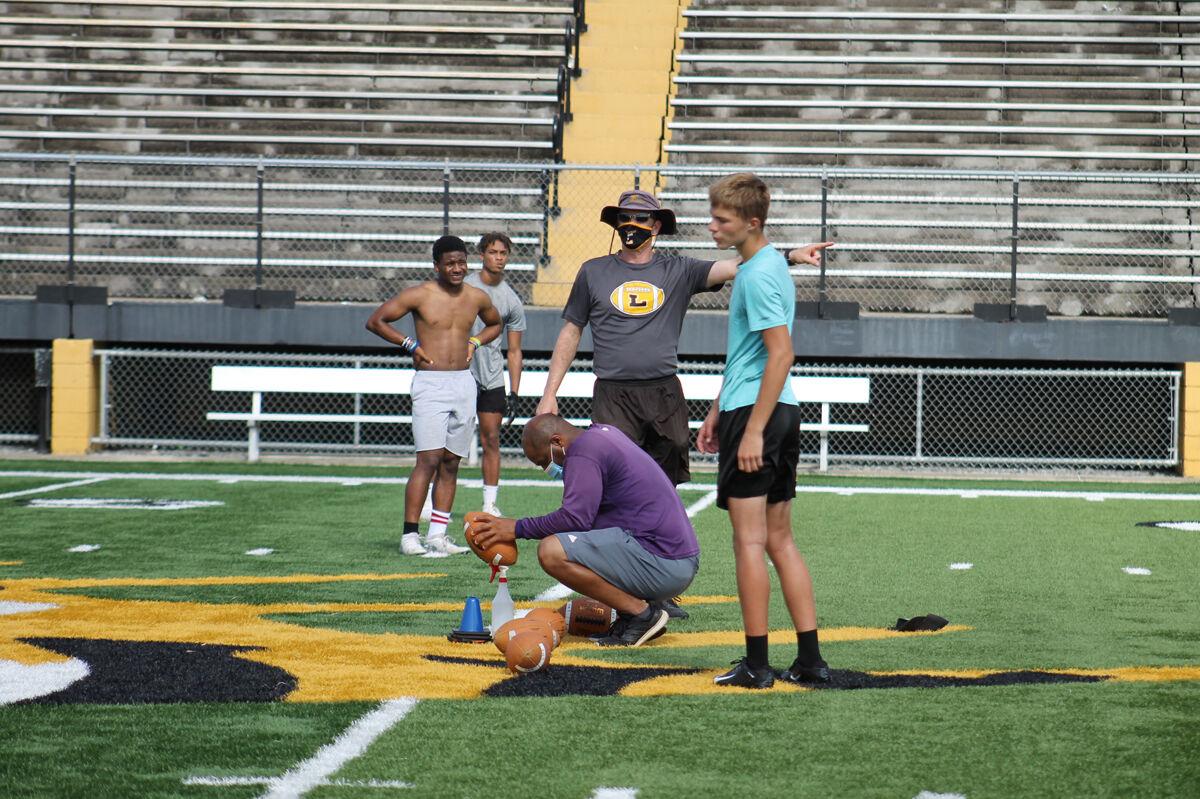 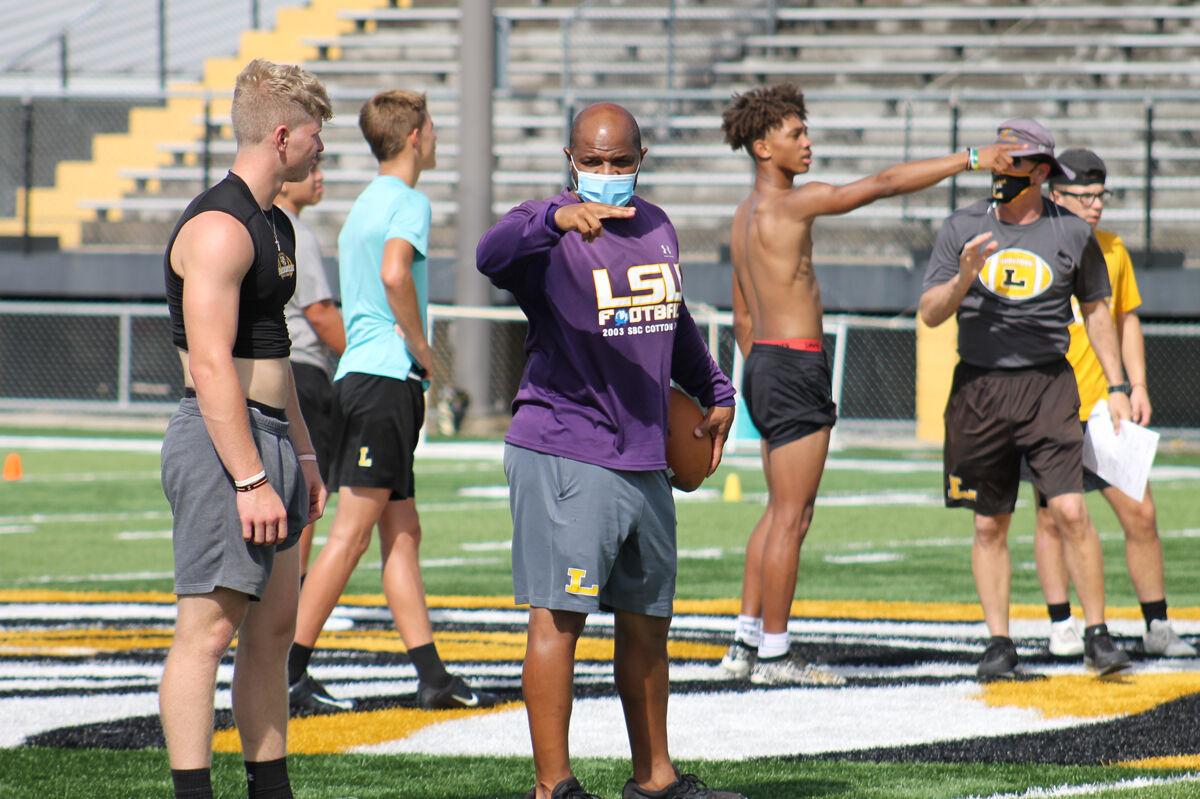 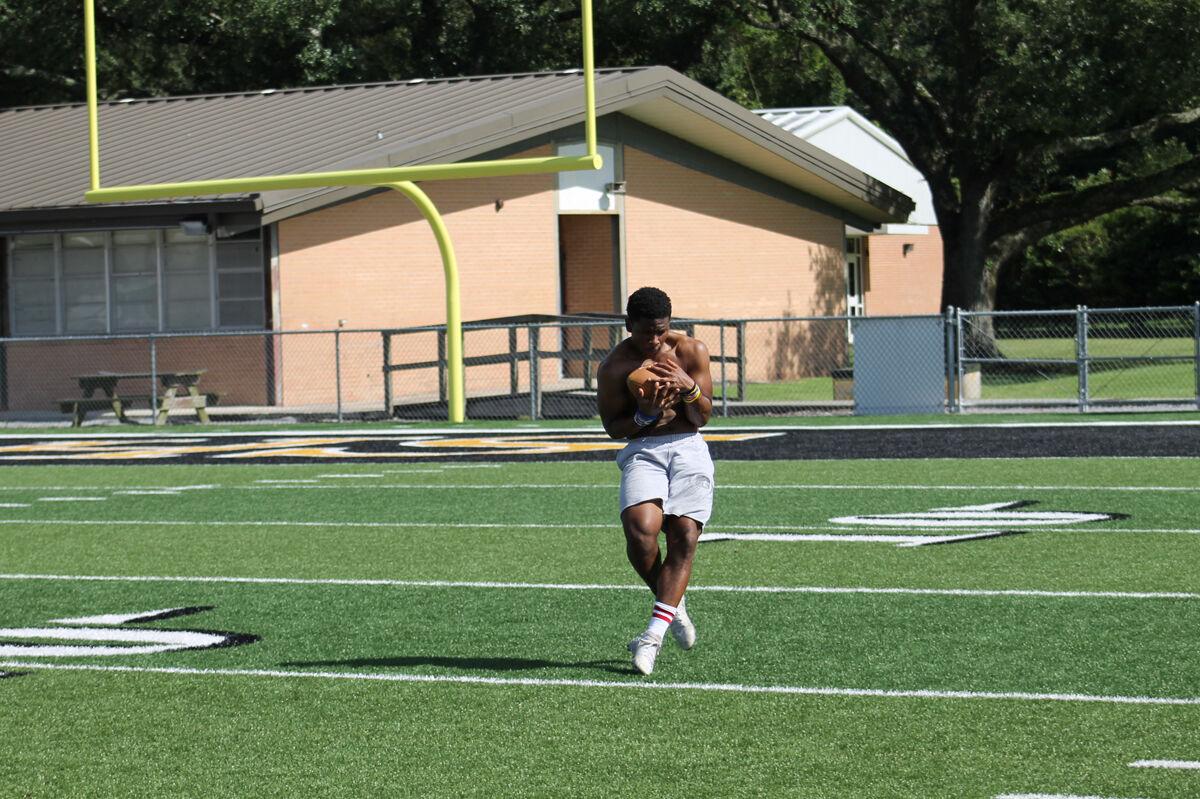 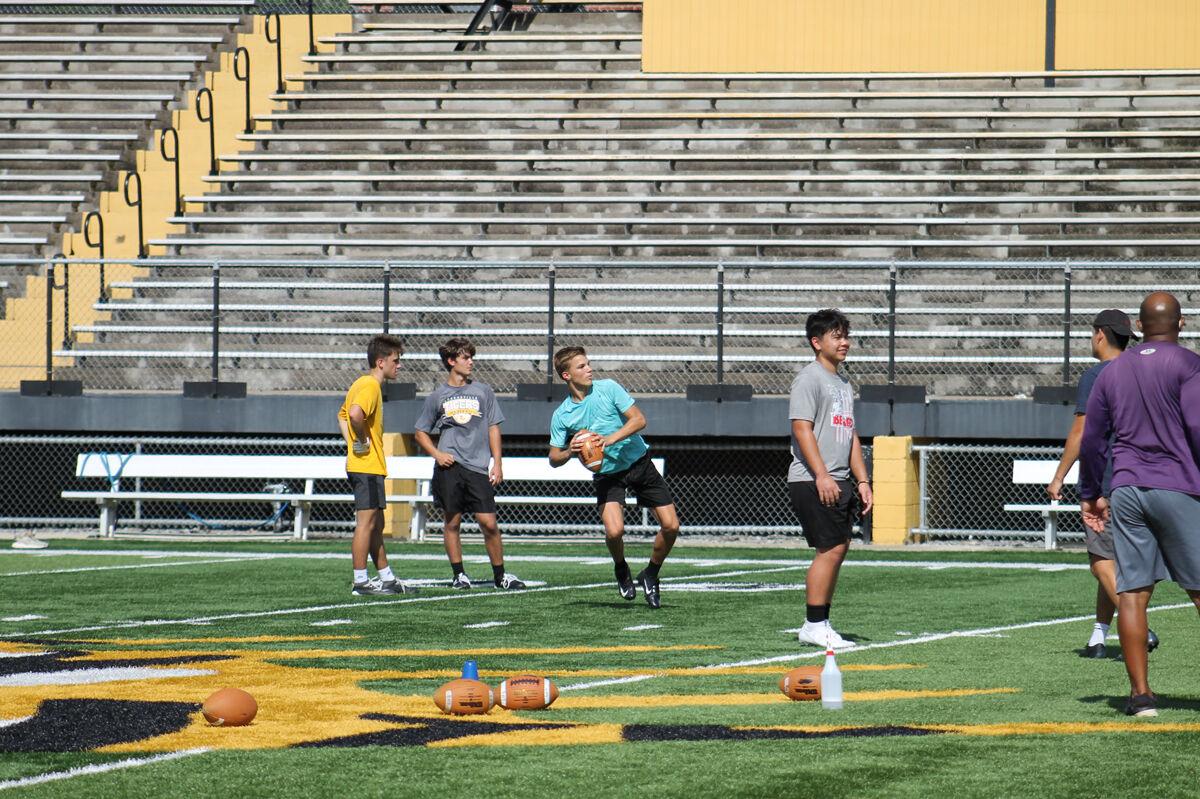 Loreauville High quarterbacks work on their footwork while spaced apart for safety purposes on Wednesday.

Loreauville High assistant coach Rhamad Lewis works with receivers, throwing a tennis ball for them to catch as they run their routes on Wednesday.

LOREAUVILLE — Loreauville High School head football coach Terry Martin is doing his best to see that his team can prepare for the season — if and when a high school season does begin — while continuing to follow parish and state government and school guidelines as well as high school athletic association rules and suggestions.

The Louisiana High School Athletic Association recently announced that football can be played once the state reaches Phase 4 of the LHSAA’s plan, which is not the same as the state’s phases.

Several nearby states — Texas, Georgia, Florida — have announced plans to start up football and high school sports in general, with no mention of phases, Martin said. Many of those states have more COVID-19 cases than Louisiana — Louisiana has a smaller population with fewer total cases but a higher rate of incidence — he said.

“You don’t see the mention of phases in any of those other schools (systems),” Martin said. “They’ve said they’re starting, which again, a declaration and actually starting are two different things. They can declare all they want.”

Martin said he thinks the LHSAA plans to have definite plans for what schools can and cannot do by today. The organization has already made the determination that regardless of when schools start — some start around Aug. 17 like Iberia Parish, and others are waiting until around Labor Day —the summer calendar ends Aug. 10. Even if schools were allowed to participate in 7-on-7 competitions with other schools, which they currently cannot, that ends on Aug. 10 regardless.

“On the 10th there’s no more intersquad like there is on a normal year,” he said. “The hope is we can start close to on time at least starting to wear shoulder pads so we can get acclimated heat-wise. All the medical review boards, the information that they’re putting out, is that to get heat acclimated they want every school to have at least four weeks (wearing pads). So the LHSAA’s thinking is, even maybe put on the shoulder pads a little earlier, no contact whatsoever, but at least heat-acclimated wise, when they do say you can start, then you don’t lose too many games (from the schedule).”

Once the LHSAA moves to Phase 3, there will be about a two-week delay but the season could start soon after.

In a perfect world, he said, if the season can start the second or third week in September, schools can play a full season and have the regular playoffs.

The Superdome has guaranteed that high school football teams can use the facility for state championship games the week after Christmas, and even into the first week or two in January, though some of those games may be played on weekdays, Martin said.

“If they allow us to do that (move to Phase 3), even if we move (the start back) two, three, four weeks, we can still hopefully get our kids a full season,” he said. “That’s the biggest concern right now.”

In Phase 2 of the LHSAA’s guidelines, no more than 25 people are allowed in a group, including the coach, inside or outside. The Iberia Parish School District was keeping that limit at 10 for inside activities such as weight room workouts, and only a couple of weeks ago let the parish’s public school football teams begin using a ball in practice.

“Other schools out of the parish were using balls, so we kind of felt we were getting left behind,” Martin said.

Loreauville is using composite balls instead of leather balls for practice, enabling coaches to spray the balls with disinfectant that dries quickly, which couldn’t be done with leather balls.

“They do allow throwing back and forth. We still cannot be within six feet apart — no contact,” Martin said.

That means that though the defensive secondary sets up to defend the offense in drills, for example, defenders can’t actually “cover” offensive players the way they would in a game or contact drill because they have to remain 6 feet apart.

Martin said he has ordered a rolling shelf unit for helmets so a coach can roll the unit out and distribute helmets to players, as a lot of schools already are having players work out in helmets. Once the players are finished using them, they’ll be sprayed down by coaches, and replaced on the shelves by the coaches so players don’t have to go into the locker room at all.

Martin also is being very strict about keeping anyone who is suspected of having contacted the coronavirus out of any work at the school.

“I’ve had a couple of times I’ve had a whole group, I’ve texted them and the parents, look, stay home until we know for sure, and it turns out it was a negative case,” he said. “Right now if a kid comes in contact to somebody who has it, they’re out 14 days, even if they test negative. It really is a burden on small schools. If you really stick to the policy and take care of what you’re supposed to do, I don’t see how you can’t have people out right now, or in and out, because it’s so widespread.”

Another factor that the LHSAA has taken care of is eligibility. Martin has heard that a lot of parents are wanting their kids to attend school virtually rather than be in classrooms. The LHSAA has ruled that even if a school (or school system) goes entirely virtual, anyone who would be eligible to play at that school under normal, in-school attendance is eligible to play sports at the school.

The LHSAA hasn’t completely ruled out the swapping of seasons — fall sports to winter, or even fall to winter, winter to spring and spring to fall — but those are the last options officials want to do, Martin said.

“Even if you do it, there would be so many unintentional consequences that would come up that we probably haven’t anticipated yet,” he said. “Especially at a school like ours, we would prefer not to do it. I want to say by far over half of the baseball team are football guys. Some of those 5A guys, where you have much larger coaching staffs, much larger student bodies, they don’t have the crossover. A lot of those coaches, they coach only one sport. It wouldn’t affect a lot of those type of schools, but it would have a huge effect on us if we have to do it, so hopefully that’s a last resort.”

Even if the schools stick to the regular order of seasons, he said, there are concerns that just can’t be answered yet.

“I think our biggest concern is can we start, and can we stay open,” he said. “And are they going to relax the guidelines? I guess at some point there’s going to have to be an assumption of risk, just like there is for anything. A kid can get a cold. A kid can get the flu. Kids get hurt in football all the time. If you have to quarantine the whole team every time someone may have it, we’ll never get our season in. I think as coaches our biggest frustration is, we need guidelines, we need definite information. And at the same time, we know this is the first time that it’s happened. There’s no definite information.”

Louisiana is still adding more than 2,000 new COVID-19 cases a day as hospitals across southwest Louisiana are reaching capacity, according to…