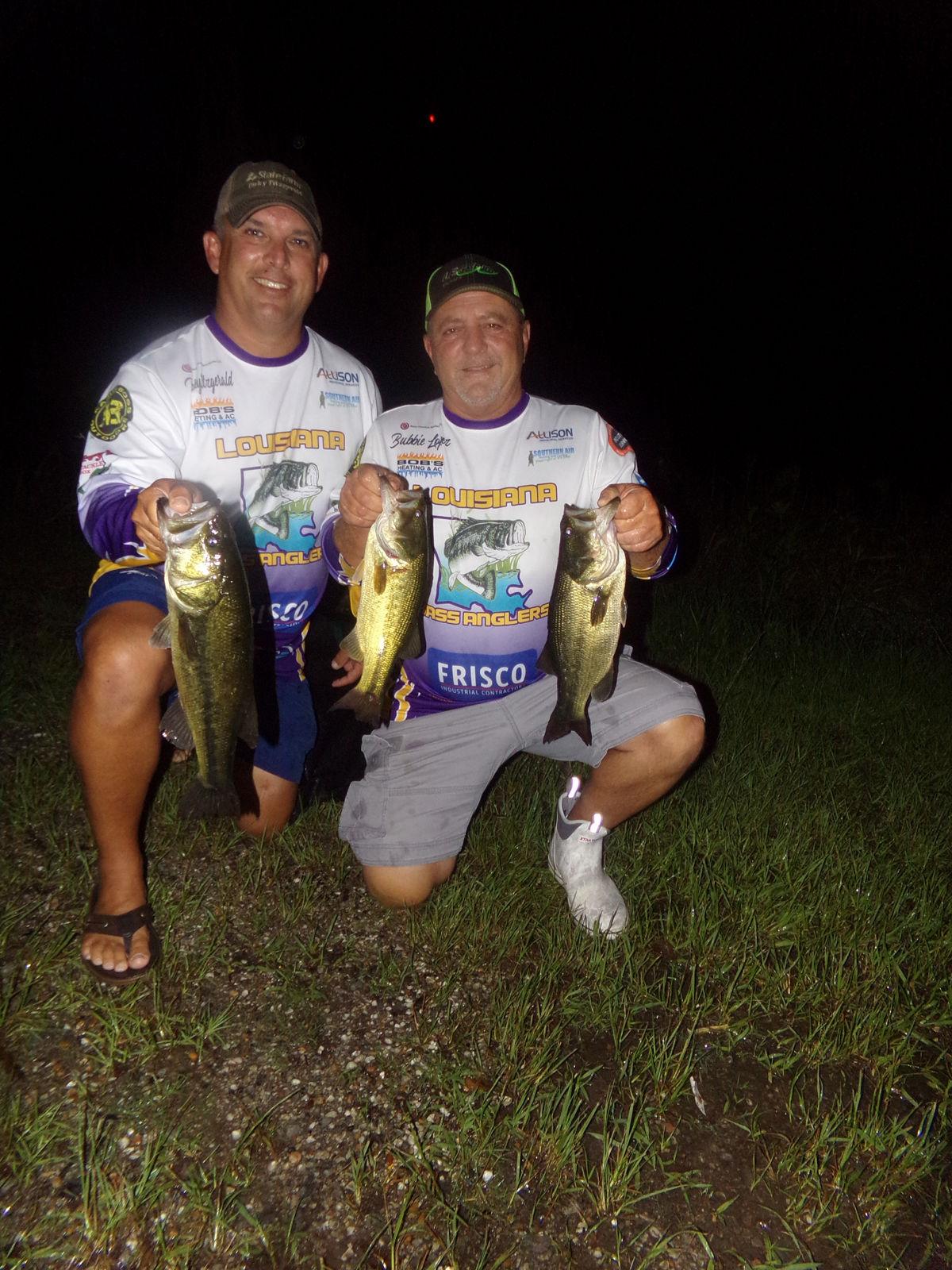 Dickie Fitzgerald, left, of Charenton, and Bubbie Lopez of Centerville hold the bass that won the seventh WN Hawg Fights BTS tournament of 2020 this past Wednesday. Fitzgerald and Lopez won the tournament out of Fairfax Foster Bailey Memorial Boat Launch with a three-bass limit weighing 6.62 pounds. 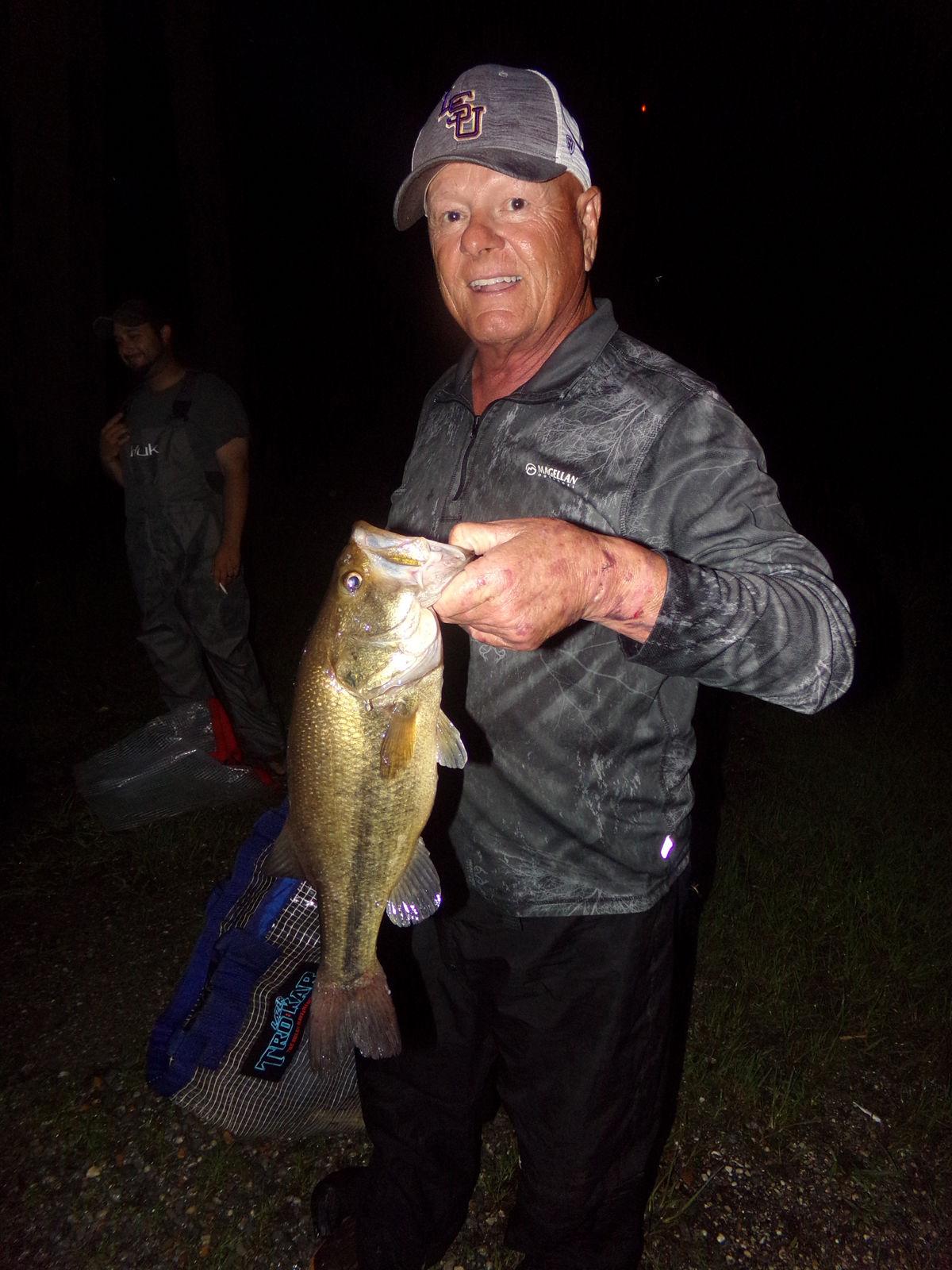 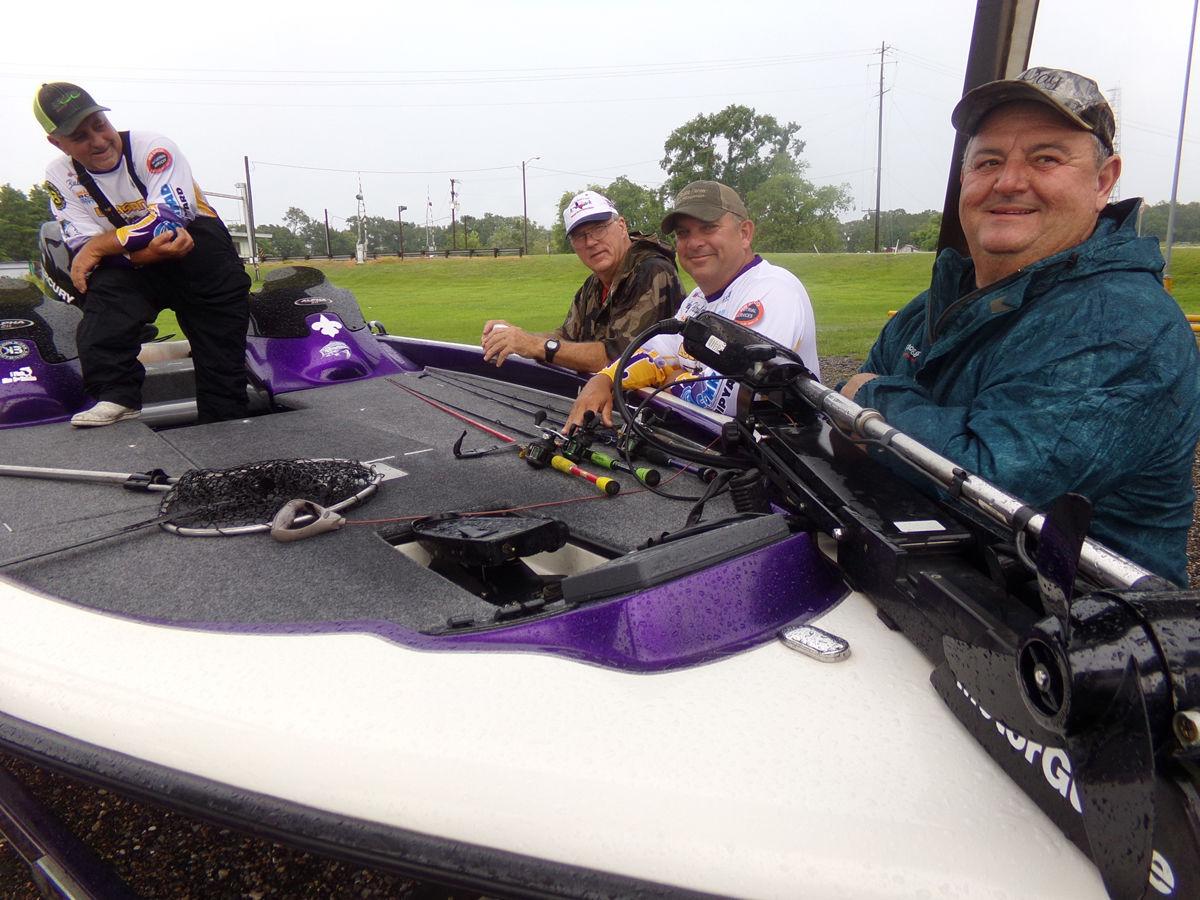 Dickie Fitzgerald, left, of Charenton, and Bubbie Lopez of Centerville hold the bass that won the seventh WN Hawg Fights BTS tournament of 2020 this past Wednesday. Fitzgerald and Lopez won the tournament out of Fairfax Foster Bailey Memorial Boat Launch with a three-bass limit weighing 6.62 pounds.

FRANKLIN — Bubbie Lopez of Centerville had the bass right where he wanted them for this past week’s Wednesday Night Hawg Fights Bass Tournament Series event out of Franklin.

Well, Lopez and Dickie Fitzgerald hoped those bass were there and in a cooperative mood, i.e. hungry, after a 20- to 25-minute boat ride from Fairfax Foster Bailey Memorial Landing.

“I was happy they were biting when we got there,” a relieved Lopez said after the two longtime friends and fishing buddies won the seventh WN Hawg Fights BTS tournament of 2020.

Lopez and Fitzgerald capitalized and culled to a three-bass limit weighing 6.62 pounds, more than enough to win the evening mini-tournament against seven other boats that fished (10 signed up) despite two-plus days of rain and a threatening weather forecast. They pocketed $225 for first place.

Bucky Crowson of Lafayette, formerly of New Iberia, and Kevin Suit of New Iberia cashed in for the second straight WN Hawg Fights BTS tournament. Their limit weighed 4.63 pounds worth $125.

Third place was claimed by Damien Clements of Jeanerette and Greer Billeaud of Lafayette. Their three bass weighed 4.49 pounds for $90.

Biggest bass of the evening, a 2.63-pounder, was weighed in by the team of St. Martinville veteran bass anglers Danny Bulliard and Carroll Delahoussaye. They won $50 with the bass Bulliard caught on a crank bait, one of two keepers he put in the boat that gave them 3.90 pounds and a fourth-place showing.

The 54-year-old Lopez, a production operator for International Oilfield Services, had the right meal ticket for the bass he caught off the Calumet Cut near Belle Isle. Lopez and his son, Dylan, 26, won a local bass club tournament there two weeks ago, he said.

They used a gold Redfin and the bass liked it a lot then and Wednesday.

“We probably caught, whew, 10 keepers. They were all small. We had one bigger — about 3 pounds — and it came off. I don’t know how those nine hooks don’t stay buttoned up when you hook a fish,” Lopez said.

The action commenced soon after they arrived about 6 p.m. The bass were hanging around grass and lily pads near drains and mixing water.

Lopez and Fitzgerald, an agent for State Farm Insurance in Morgan City, have been bass tournament partners for many years, Lopez said. They fish well as a team.

“Oh, yeah. We fish as much as we can together,” Lopez said.

The next WN Hawg Fights BTS tournament is scheduled to be held July 8 at Myette Point Boat Landing in the Atchafalaya Basin. The $60 per boat entry fee must be paid before 1 p.m. the day of the tournament at Cajun Guns & Tackle in New Iberia.

The Hawg Fighters fished all of their tournaments last season outside the Atchafalaya Basin, which was unfishably high until at least August. They have been waiting to go after bass in the nation’s last great overflow swamp this year and the Atchafalaya River stage forecast at Butte La Rose shows it dropping to 13.0 feet on Tuesday. In all likelihood it will be at least in the 12s by July 8.