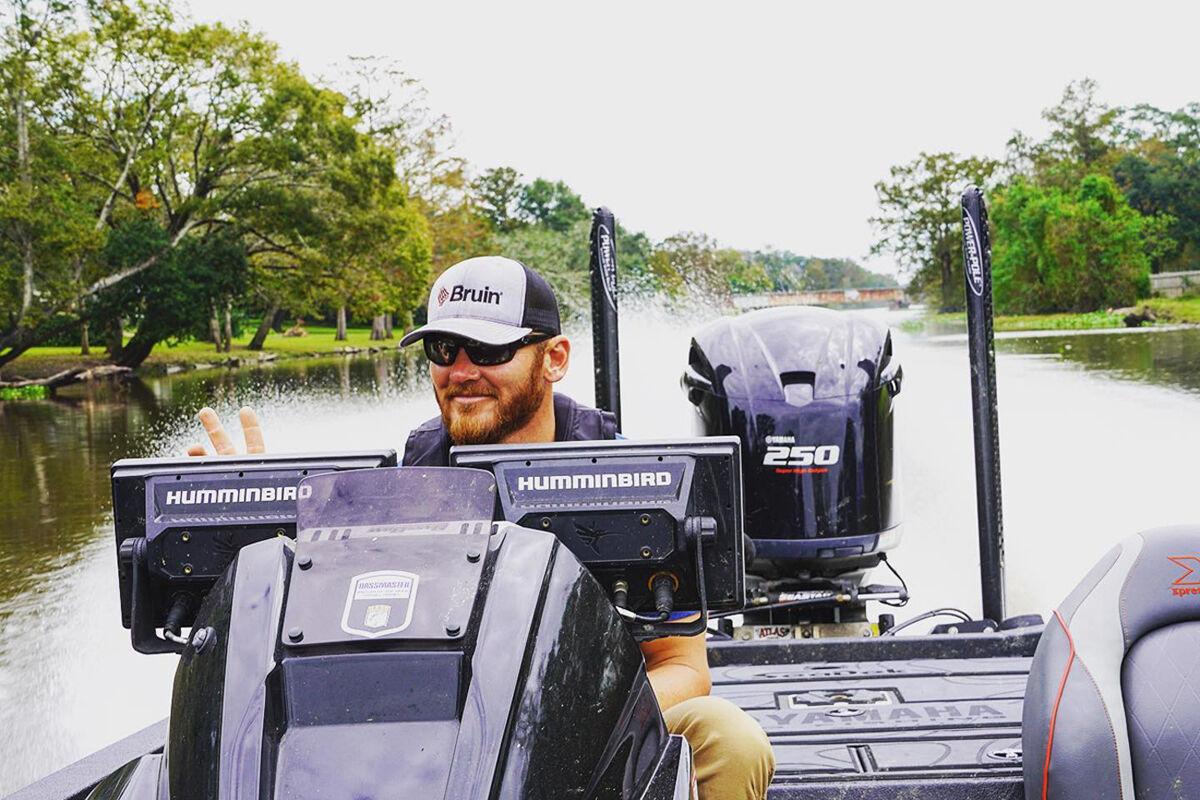 Caleb Sumrall, shown running the Bayou Teche in his Xpress, has been enjoying the offseason from the Bassmaster Elite Series. But he’s ready to get back on the tournament trail and qualify for the 2022 Bassmaster Classic. 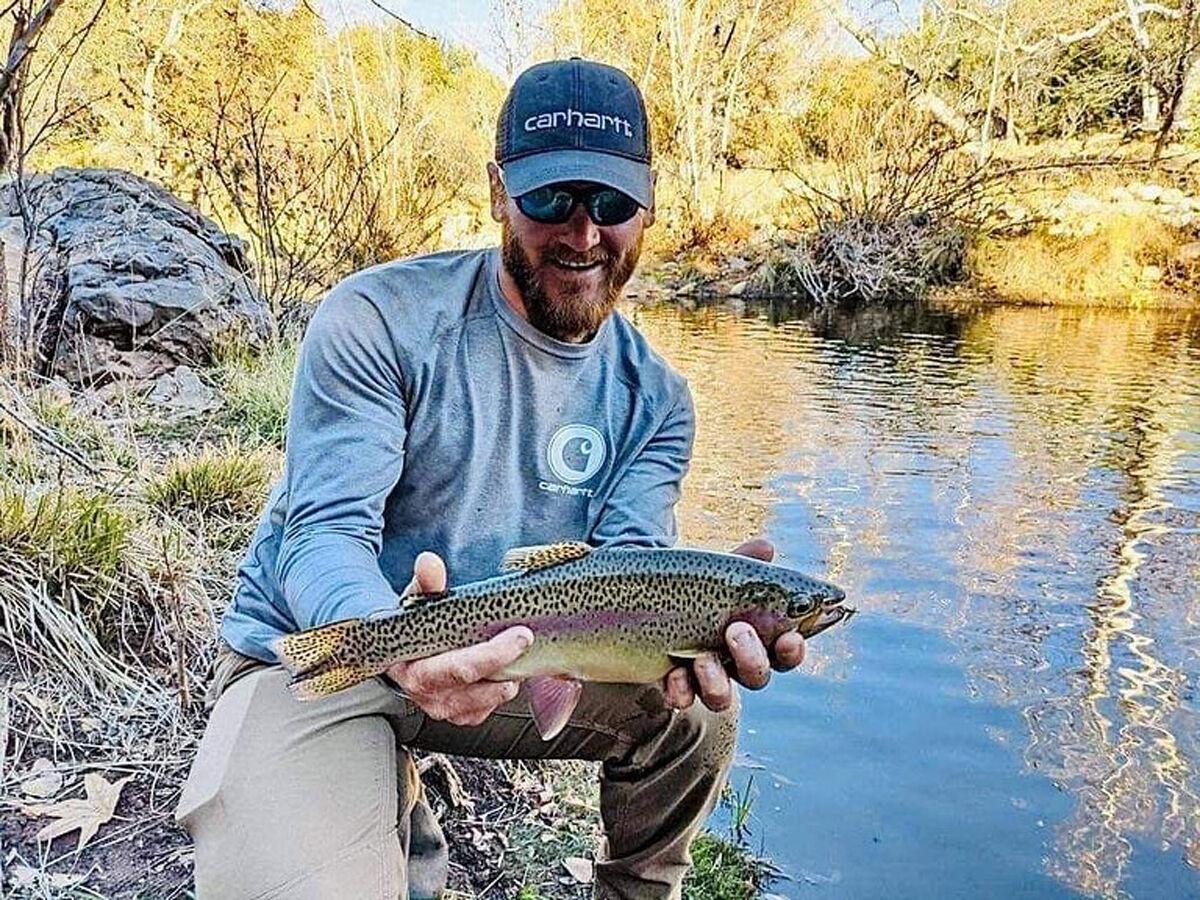 New Iberia outdoorsman Caleb Sumrall, a three-year veteran on the Bassmaster Elite Series, smiles broadly as he cradles a rainbow trout he caught near Payson, Arizona.

Caleb Sumrall, shown running the Bayou Teche in his Xpress, has been enjoying the offseason from the Bassmaster Elite Series. But he’s ready to get back on the tournament trail and qualify for the 2022 Bassmaster Classic.

New Iberia outdoorsman Caleb Sumrall, a three-year veteran on the Bassmaster Elite Series, smiles broadly as he cradles a rainbow trout he caught near Payson, Arizona.

On Thursday, New Year’s Eve, Caleb Sumrall accomplished a lofty goal he set for himself before 2020.

The 33-year-old New Iberian logged his 1,243rd mile (1,243.2 miles to be exact) as a runner last year, quite an accomplishment for an outdoorsman who just wanted to trim down some and get in shape for the rigors of professional bass fishing. He outran his goal to run 1,000 miles.

With that milestone in the books, Sumrall now has laser target vision focusing on the main objective that got away from him in 2020. The 2017 B.A.S.S. Nation champion, third-year Bassmaster Elite Series pro and two-time Bassmaster Classic qualifier finished 60th last year in the Angler of the Year standings with 465 points, which means he will be a spectator rather than a competitor for the Bassmaster Classic originally scheduled for March but postponed until June 11-13 at Lake Ray Roberts in Texas.

He’s setting his sights on a return to the Super Bowl of bass fishing with an improved performance in 2021.

“My goal is to make the Classic, and make some money,” Sumrall said a few days before running that 1,243rd mile.

The 2020 whiff at qualifying has haunted him since the regular season ended with a 68th-place finish the first week of November at Lake Fork in Texas. He has enjoyed the ensuing off-season by spending time with his wife, Jacie, and their young children, Clelie and Axel, hunting bull elk in Arizona, deer near Eagle Pass in west Texas and shooting a javelin with an arrow at 101.6 yards, and, of course, some fishing, including “donkey rainbow trout” near Payson, Arizona.

The holidays were special as he relaxed with his family.

“It’s been good being at home, catching up on quality time,” he said.

His pro bass fishing mindset was evident in his Facebook post on Nov. 9.: “I’m so damn grateful to be able to do something I love for a living and I’m motivated more than ever to have my best year ever next year! … We’re going to do a little hunting, regroup and hit the ground running next year.”

Sumrall said a few weeks ago he was going into the new year without a title sponsor, which is a concern. The door is open to make a title sponsor deal with anyone, including non-endemic, he said.

His quest for a title sponsorship is critical. He wants to continue at the pro bass fishing level and devote more time to prefishing each tournament site.

He fills much of that time now as a bass fishing guide at Toledo Bend, where he works occasionally with fellow Bassmaster Elite Series pro Darold Gleason of Many, and this year plans to team up with his good friend Damein Clements of Abbeville, formerly of Franklin, for bass and sac-a-lait trips on the border lake in northwestern Louisiana. Clements has said in the past he and Sumrall are like brothers.

“I’d like to be prefishing all of these places more,” Sumrall said about prefishing waterbodies on the Elite schedule for 2021.

“I like the schedule, everything about it,” he said.

The Elite tour kicks off Feb. 11 at St. Johns River in Palatka, Florida. The second tournament of the season is scheduled two weeks later at the Tennessee River in Knoxville.

Because the Bassmaster Classic was rescheduled from March to June 11-13, as was announced Thursday, the Bassmaster Elite tournament at Pickwick Lake in Florence, Alabama, originally scheduled for June 10-13 instead will be held on March 18-21.

The Elites get back on the water again April 8 with the closest tournament to New Iberia at the Sabine River in Orange, Texas. There’s another tournament in April on the 22nd at Lake Fork in Emory, Texas.

May and early June bring an Alabama swing to Neely Henry Lake near Gadsen on May 6, then to Lake Guntersville, site of the 2020 Bassmaster Classic, on May 20.

Sumrall said he is looking forward to the Northeast swing that starts July 8 at Lake Champlain near Burlington, Vermont, and finishes with a July 15 date at the St. Lawrence river out of Waddington, New York.

Like the all-around outdoorsman said on Facebook, he wants to “hit the ground running” in 2021. That didn’t happen in 2020.

Sumrall came out of the gate slowly the second week of February with a 48th place finish for $5,000 in the opener at St. Johns River. Following a heart-breaking 26th-place finish, just outside the Top 25 cut (by 4 ounces), in the Classic at Lake Guntersville, the schedule went haywire because of coronavirus pandemic restrictions that postponed or outright canceled the next few tournaments.

The season resumed in June at Lake Eufala in Alabama, where the New Iberian finished 26th for $10,000. He wouldn’t finish in the Top 40 until five tournaments later with a 30th place in early October at Santee Cooper Lakes in South Carolina for another $10,000.

Things were looking up after that and a 13th-place result worth $12,000, his best outing of the season, in mid-October at Chickamauga Lake. However, he was 68th in the regular-season finale the first week of November at Lake Fork in Texas.

“That was pretty aggravating, frustrating I didn’t make the Classic. If I would have caught everything that bit I would have been in the Classic. Last year was an abnormally tough year for fish losses,” he said.

Otherwise, he gave it his all.

“I hit it hard. I practiced good. If I caught everything that bit, I’d be going to the Classic,” Sumrall said.

There will be quite a few new faces on the Bassmaster Elite Series tour in 2021. One of the new faces is a former Elite who has rejoined the top echelon of B.A.S.S. competition in Greg Hackney of Gonzales. Another is Scott Martin of Clewiston, Florida. Hackney and Martin both qualified with hard-earned finishes in 2020 Bassmaster Opens.

“They’ve got some hammers this year. They’re not going to make it easy, that’s for sure. I’m not going to give it to them,” he said.

He’s going to continue living and working his dream.