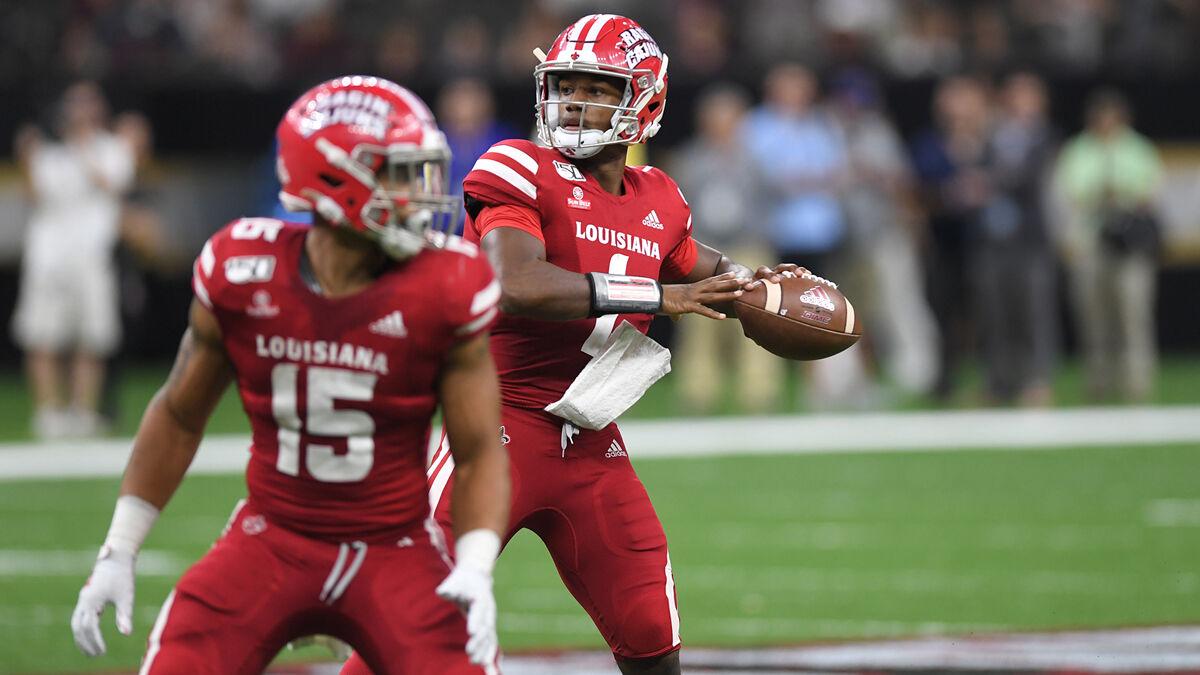 UL Lafayette quarterback Levi Lewis (1)  was one of 30 quarterbacks nationwide named to the Manning Award Preseason Watch List. No other quarterbacks playing college football in Louisiana were on the list, though other players may be added to the watch list during the season. The award, sponsored by the AllState Sugar Bowl, is presented to the top collegiate quarterback in the country and is the only quarterback award that takes into account the player’s bowl performance in the voting.

LAFAYETTE — Senior Levi Lewis is the lone Louisiana player named to the Manning Award Preseason Watch List on Thursday, the third preseason watch list to which the UL Lafayette quarterback has been named.

The Baton Rouge native, who started all 14 of the Ragin’ Cajuns games in 2019, threw for 3,050 yards and 26 touchdowns, both of which were single-season school records.

UL Lafayette won a team-record 11 games in 2019, including a 27-17 win over Miami (Ohio) in the 2020 LendingTree Bowl, which saw Lewis named the game’s Most Valuable Player.

He was consistent throughout the year, according to a statement from UL Lafayette, helping the team set the program record for the highest completion percentage in a single season at 64.89 (268-for-413). His most accurate game came on Nov. 7 at Coastal Carolina, when he set the school single-game record for completion percentage at 86.7 (26-for-30).

In the Sun Belt Conference Championship Game at Appalachian State on Dec. 7, 2019, Lewis threw for career highs in yards (354) and touchdowns (4) in the team’s second consecutive appearance in the league’s title game.

Lewis also rushed for 195 yards and three touchdowns. The Cajuns scored a school-record 42 rushing touchdowns and finished the season with 6,918 total yards of offense and 69 total touchdowns, the most in a single season in school history.

The Manning Award was created by the Allstate Sugar Bowl in honor of the college football accomplishments of Archie, Peyton and Eli Manning. It is the only quarterback award that includes the candidates’ bowl performances in its balloting.

“It sure has been a unique offseason, but we’re still looking forward to the prospect of seeing a great group of quarterbacks compete this year,” Archie Manning said in a statement from the AllState Sugar Bowl. “Our Watch List is once again an exceptional group of candidates, but every year is a new year and we’ll be watching closely to add the best newcomers to the list after we get things rolling. I’d also like to thank the Allstate Sugar Bowl for sponsoring this award; it means a lot to the entire Manning family that they include our name in recognizing the best quarterbacks in the country.”

“The Sugar Bowl has considered it a great honor to sponsor the Manning Award for the past 16 years,” Allstate Sugar Bowl CEO Jeff Hundley said in a statement. “We all look forward to watching these young men perform during a season that’s likely to be like none other for many reasons. At the end, the Committee will be ready and privileged to recognize one of them as the Manning Award winner.”

This year’s Watch List includes players from all 10 Football Bowl Subdivision conferences. The AAC, Big 12 and Big Ten lead the way with four selections, while the ACC, C-USA, the Pac-12 and the SEC each have three selections. There are 13 seniors on the list while the junior class is represented by 11 quarterbacks and the sophomore class has six.

LSU quarterback Joe Burrow won the award in 2019 after a historic season that saw him lead LSU to the College Football Playoff championship with a 15-0 record.

The senior set the NCAA FBS record with 60 touchdown passes while leading the nation with 5,671 passing yards and narrowly missing setting the FBS record for completion percentage – he finished at 76.3 percent as he completed 402 of 527 passes. More impressively, he led the Tigers to a perfect 15-0 season including a dominant 42-25 College Football Playoff (CFP) National Championship victory over defending champion Clemson. Burrow was named the Most Outstanding Player of the championship game after throwing for 463 yards and five touchdowns.

In addition to the Manning Award, Burrow earned nearly every national honor possible – he won the Heisman Trophy, the AP National Player of the Year award, the Maxwell Award, the Walter Camp Award, the Davey O’Brien Award and the Johnny Unitas Award as well as being a unanimous First-Team All-American and the SEC Offensive Player of the Year.

Should disruptions or modifications to the 2020 season occur due to the coronavirus, the Department of Athletics will communicate plans to fans and season ticket holders regarding accommodations for pre-purchased tickets.