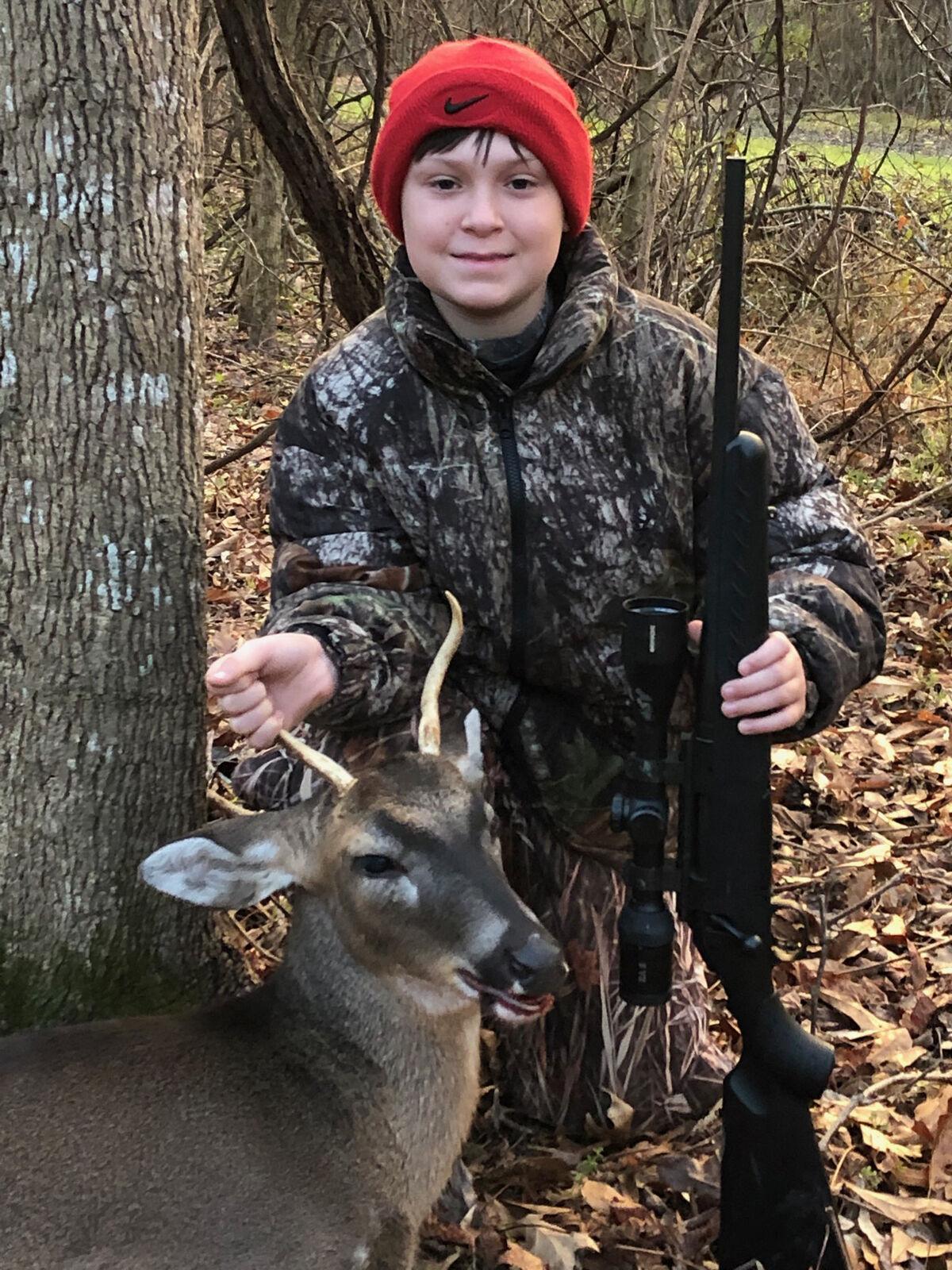 Graham Edwards, 11, a sixth-grade student at Belle Place Middle School, smiles as he holds a rifle in one hand and the spike of a young buck in the other hand after shooting it in January. It was the first deer as a hunter. 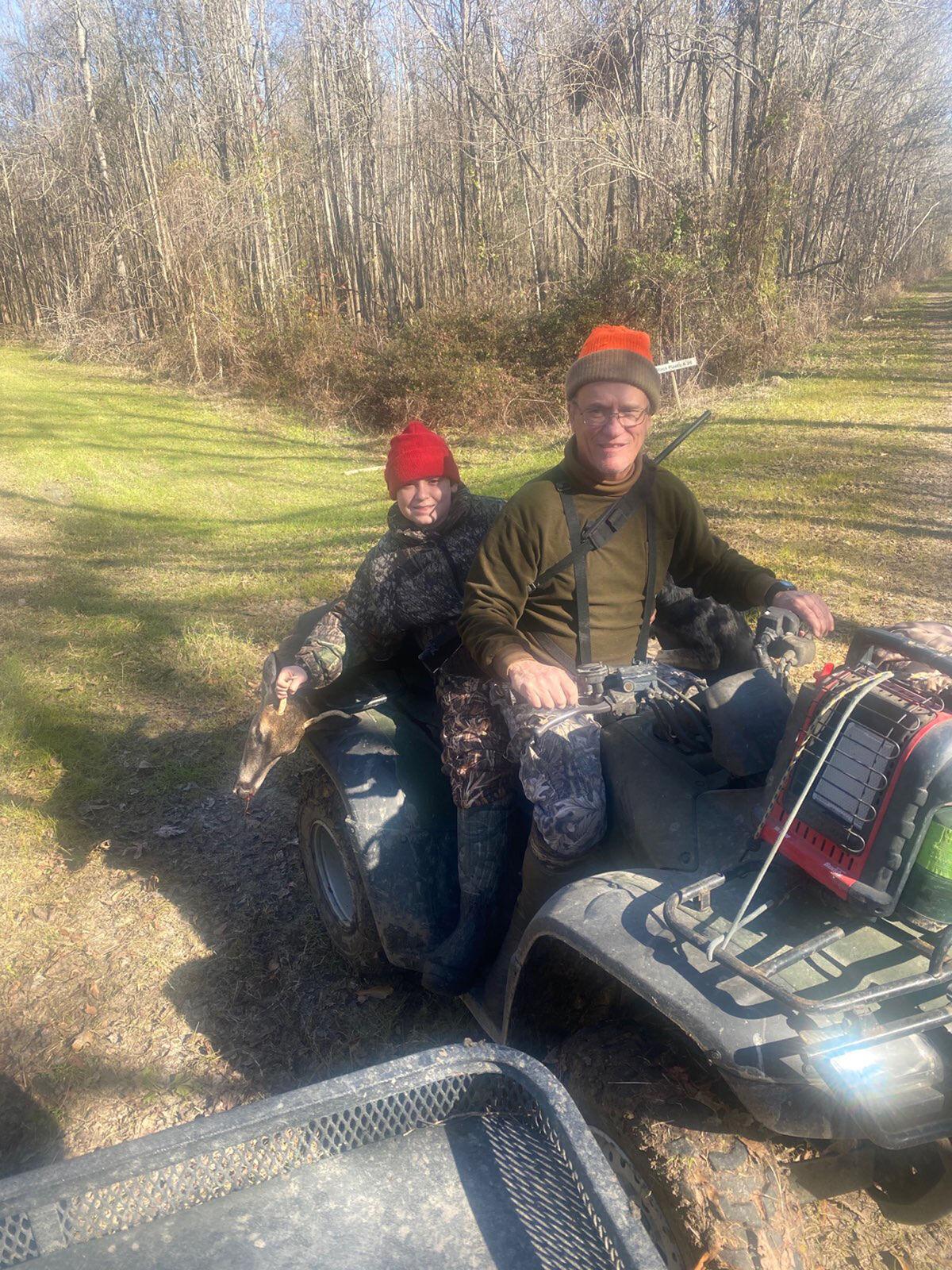 Keith Price is behind the wheel of a four-wheeler soon after his grandson, Graham Edwards of New Iberia, shot and killed the first deer of his life while they were hunting in Iberville Parish.

Graham Edwards, 11, a sixth-grade student at Belle Place Middle School, smiles as he holds a rifle in one hand and the spike of a young buck in the other hand after shooting it in January. It was the first deer as a hunter.

Keith Price is behind the wheel of a four-wheeler soon after his grandson, Graham Edwards of New Iberia, shot and killed the first deer of his life while they were hunting in Iberville Parish.

An 11-year-old New Iberia outdoorsman remembers the pressure disappearing like air escaping from a balloon as well as experiencing “just an amazing feeling” on Jan. 17, the morning he killed his first deer.

Graham Edwards was with his maternal grandfather, Keith Price of New Iberia, for that big moment. He downed the “spike” buck on one pull of the trigger.

“It’s amazing after all the time I’ve been trying. That kind of lets some pressure off,” the youngster said, summing up his feelings about finishing the quest to harvest his first deer.

Ditto for his granddad.

“Well, I was just proud at that moment. He’s been hunting three years. He’s seen a few but he never could get a shot. It was nice to see everything come together,” Price said.

The son of Nick and Cassie Price Edwards shot and killed his first wild pig at age 7. He has three feral hogs to his credit while hunting with Price.

Until Jan. 17, however, Graham was shut out from notching his first deer kill after trying for three seasons.

“Oh, yeah, it means a lot more to see your grandson kill one,” he said.

Graham, a sixth-grade student at Belle Place Middle School who has developed into quite a marksman with a bow and arrow, like his maternal grandfather, got his first deer with a rifle instead of a bow and arrow that mid-January morning.

The grandfather and the young outdoorsman were sitting in a raised box blind about 6 feet off the ground on a lease in Iberville Parish near the Sherburne Wildlife Management Area. They got up before sunrise to make a morning deer hunt. They settled into the box blind and waited, as they have so many times together, and were “enjoying life,” as Price put it.

“It was pretty cold that weekend so it was nice to be sitting in a box blind. Actually, things were pretty quiet. But it doesn’t take long for things to change. You don’t see anything one second and the next second one pops out of the ground,” he said.

Indeed. The spike seemed to materialize out of nowhere. It was behind them.

Price said, “He saw it first. He tapped my shoulder and pointed in the opposite direction. The deer came out behind me.”

“There wasn’t much time to act. I turned around and saw it. I told him (Price). He put the rifle up. The deer stopped and I knew I probably would get it,” Graham said.

The boy went through the time-honored checklist for hunters young and old, shouldered the Ruger American Compact Bolt-Action .308-caliber Winchester, aimed, then softly squeezed the trigger once. The bullet hit the young buck in the shoulder area, he said about the 75-yard shot.

“I mean, I knew it probably wasn’t going to run very far but I didn’t want to jinx myself. I was pretty excited. Yes, there were some high-fives,” Graham said.

“He made a good shot on the deer so undoubtedly he must have done it right. It must have trotted off 5, 10 yards to the edge of the woods. That’s when we saw it fall. That’s when we gave the high-fives,” he said, adding beaucoup photos were snapped during and after those exciting moments and sent to the boy’s parents.

Price and Graham waited approximately 10 minutes before exiting the box blind. Then they made the long-awaited walk together and celebrated some more.

“It was a really, really pretty deer, a pretty good one, a nicer deer than my first one. Of course, we were zinging the pics (pictures). He finally closed the deal,” said Price, who killed his first deer, a doe, in 1980 at age 20 with a bow while hunting with a buddy in the marsh of Vermilion Parish, then didn’t make his first deer kill with a rifle until he was around 30 years old.

Price, who recently announced his decision to retire within a few months as owner of Blue’s Archery at Cajun Guns & Tackle, has stored the rifles and archery equipment after yet another season in the woods. He’ll perpetually remember the 2020-21 deer hunting season and so will Graham as he grows into the outdoors, both hunting and fishing, in and around the Sportsman’s Paradise.