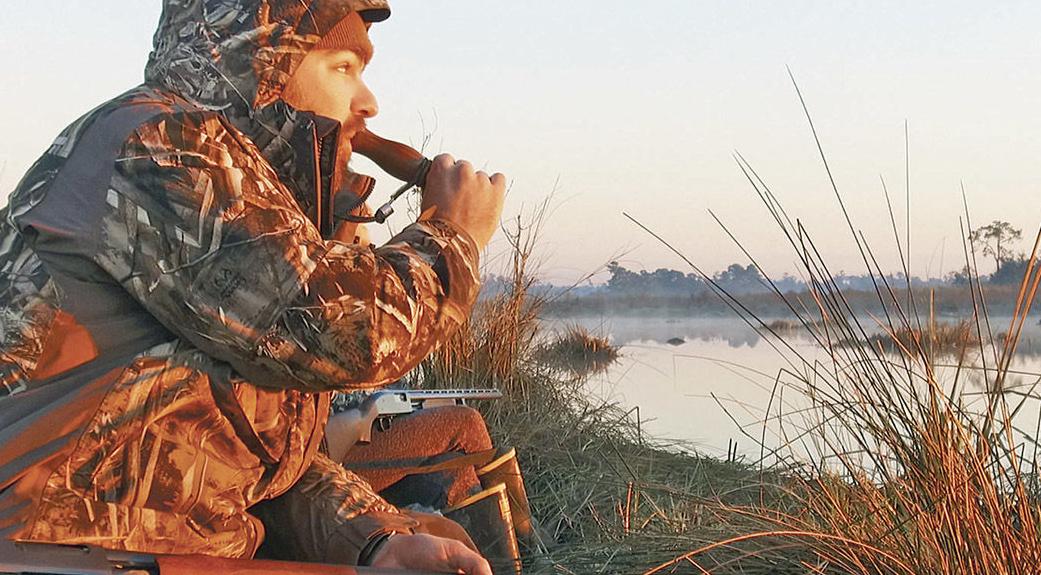 A scene from ‘In the Blind’ captures the moment Louisiana duck hunters wait for for months. The LPB documentary airs Dec. 12. 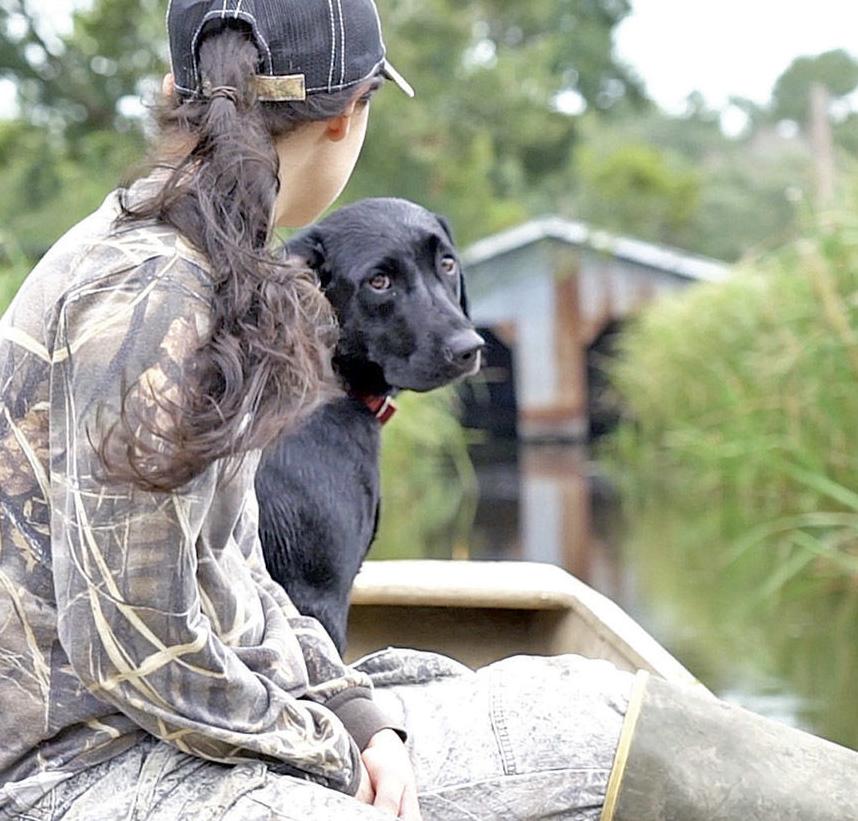 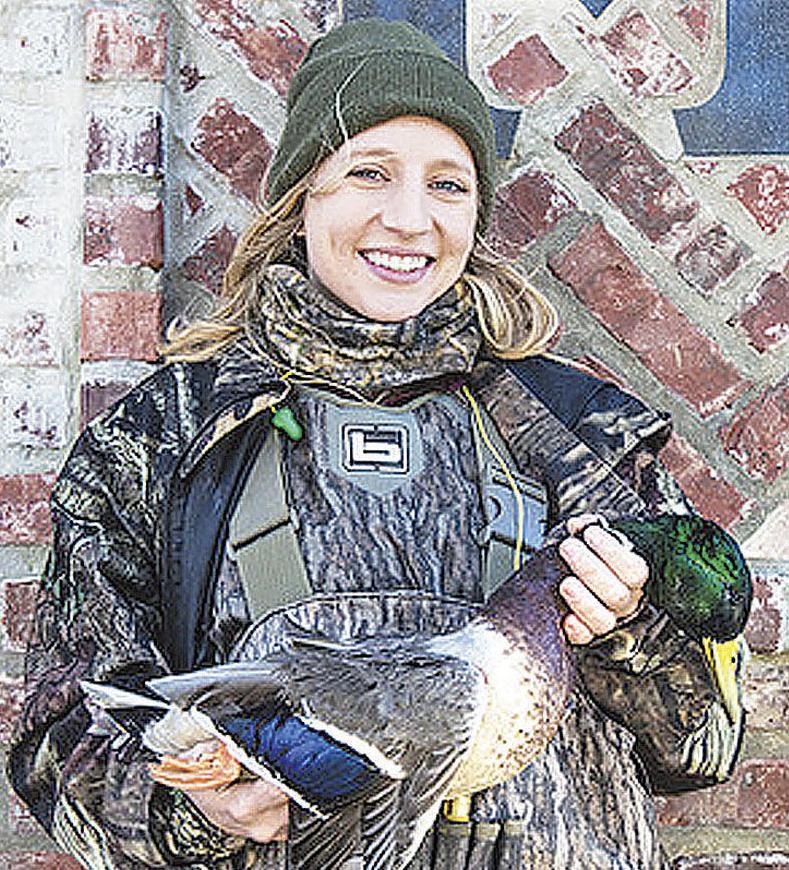 ‘In the Blind’ producer Emma Reid smiles proudly while holding the first duck she killed while at Honey Brake.

A scene from ‘In the Blind’ captures the moment Louisiana duck hunters wait for for months. The LPB documentary airs Dec. 12.

‘In the Blind’ producer Emma Reid smiles proudly while holding the first duck she killed while at Honey Brake.

Minnesota native Emma Lou Reid has been on a mission since she settled into a duck blind for the first time one morning in 2016 in Louisiana.

The Louisiana outdoorswoman, a naturalist and swamp tour guide with a background in environmental science and a love for making meaningful documentaries, wanted to show why duck hunting means so much to so many men, women and children in the Sportsman’s Paradise, and why duck hunting is so important to conservation.

“In the Blind,” Reid’s documentary, tells that story in December. The movie, which includes brief scenes from a popular event in Coteau, will be aired on the Louisiana Public Broadcasting network starting at 7 p.m. Dec. 12. Two screenings are scheduled before that with a Shreveport Premier on Dec. 9 at the Robinson Film Center and a Lafayette Premier on Dec. 11 at the Acadiana Center for the Arts.

Reid, who moved this past week from New Orleans to Baton Rouge, said she was putting the finishing touches, finally, on the documentary this past week. When would it be a wrap?

“Hopefully, Wednesday, you know. It’s crunch time over here. I would like to finish before Thanksgiving,” Reid said around midday Monday, one hour after filming a segment for the Paradise Louisiana cable television fishing show with host Gary Rispone. That show aired Wednesday evening on Cox Sports TV.

“It’s taken every bit of energy that I have,” she said during the cable television fishing show.

The stretch run this fall was tiring. She told Rispone she went on duck hunts nearly every day of the special teal hunting season in September to get more scenes for “In the Wild.”

“It feels like I learned much more with each person I went out with. I almost wanted to take a whole another season but at some point” there has to be a cutoff date, she said.

She immersed herself into the politics, landscape and culture of duck hunters across the state. She obviously liked what she found because it became a labor of love.

“You kind of appreciate the history of waterfowling in the country and Louisiana. I think it will help people who care about duck hunting, what it would mean to lose the tradition, what it would mean to lose the kids — lose the (future) hunters, lose the funding for conservation,” she said, noting the show also dwells on the decline of the coastal ecosystem and the effort to preserve a fragile, disappearing habitat.

“You know, I think it was really just the whole process and I talk about it in the film. All of the tradition. The morning. The coffee. The camp. The cooking,” she said.

She especially enjoyed going on duck hunts with the families whose young boys tagged along.

“I just loved seeing the generational things that they passed down,” she said.

People can view a 4:33 trailer for the upcoming documentary at www.intheblinddoc.org. Her introduction sets the mood.

“There’s a group of people who wake up before dawn. They read the weather and the land like a book. For months, they prepare. They teach their children, train their dogs, and often spend a small fortune. All of this to quietly watch the earth come to life and hopefully shoot a duck,” Reid says softly, her words measured to blend with the spectacular scenery, in the first 30 seconds of the trailer.

The 58-minute, 46-second movie’s message is for duck hunters and non-duck hunters alike. While she didn’t encounter any antis (anti-hunters) she met people who have no idea hunting is conservation, something many hunters realize while some other hunters don’t.

There are graphics as visual aids, including one showing how much money is raised from federal duck stamps and hunting licenses and where it goes.

Reid takes viewers across Louisiana from coastal marshes to flooded forests to trace the history of some of the most famous hunting clubs, as well as waterfowl hunting on public land. She gives a “day in the life” look at duck hunting’s most passionate participants, from duck hunters to duck hunting guides to the card players, storytellers, cooks, decoy carvers, duck call makers, wildlife conservationists, land managers and environmental journalists.

“I actually got a good shot from the Duck Wake for the film. Yeah, I really enjoyed it,” Reid said about her brief stay the night of Feb. 3 in Coteau.

That she got there at all was a stroke of good timing.

“At the last minute, somebody called and said there’s this crazy thing. A bunch of guys mourning over the symbolic duck that didn’t make it,” she said.

Reid decided to go and, along with a photographer, Steven Murphy of Lafayette, arrived a little late. They enjoyed filming the annual event, she said.

“That was fun and some of the best gumbo I ever had … with egg and everything. I don’t think I’ve seen so much gumbo eaten … The servings (per person) were hefty,” she said, remembering the voluminous portions people carried away from the serving line.

During the documentary, viewers will see a scene or two from the Duck Wake, she said. While she talks about the unique cultural traditions and celebrations about ducks, the competitions, duck decoy carving shows, retriever dog competitions, etc., across the state, there are two glimpses of the event held inside the Francis Romero Memorial Building.

“I have a shot of the gumbo and a shot of the duck in the coffin. There are some people in it,” she said, noting mostly hands and arms of people either ladling gumbo or holding bowls.

So many months later, Reid accepted an invitation to attend the New Iberia Ducks Unlimited Chapter’s annual fundraising banquet in early November at the Isle of Iberia RV Resort. She planned to go but her vehicle, perhaps protesting the hundreds of miles traveled for documentary purposes over the past two years, had other plans and she couldn’t make it.

The 26-year-old filmmaker said there were no bad experiences. However, she added quickly, it was a shock to her system that she couldn’t handle Louisiana’s “cold.”

“I’m from Minnesota, so I thought that I could be a little more thick-skinned for the cold, so I wasn’t prepared sometimes. Usually, I borrowed men’s clothes,” she said, adding the cold weather down here chills the bones.

“I think down around Buras, it was like a 20-minute boat ride to get to the blind. I was thinking, ‘These people are crazy, crazy, and they love it,’ ” she said.

While she absorbed each and every exciting minute from the predawn darkness to the end of a duck hunt in countless duck blinds, she shot rarely and, when she did, she was duckless for a long time.

“I never actually hunted until last year. When I killed my first duck, I didn’t think I’d be as interested in hunting. Once I started shooting myself I got into it, so, you know, I got the bug. It worked out,” she said, noting she has enough duck hunting invites to last a few years.

That first duck was a greenhead, a beautiful male mallard. She was duck hunting at Honey Brake, a 20,000-acre hunting lodge along the shoreline of Larto Lake near Jonesville.

After the successful shot, she said, “I was really excited. It was really rewarding.”