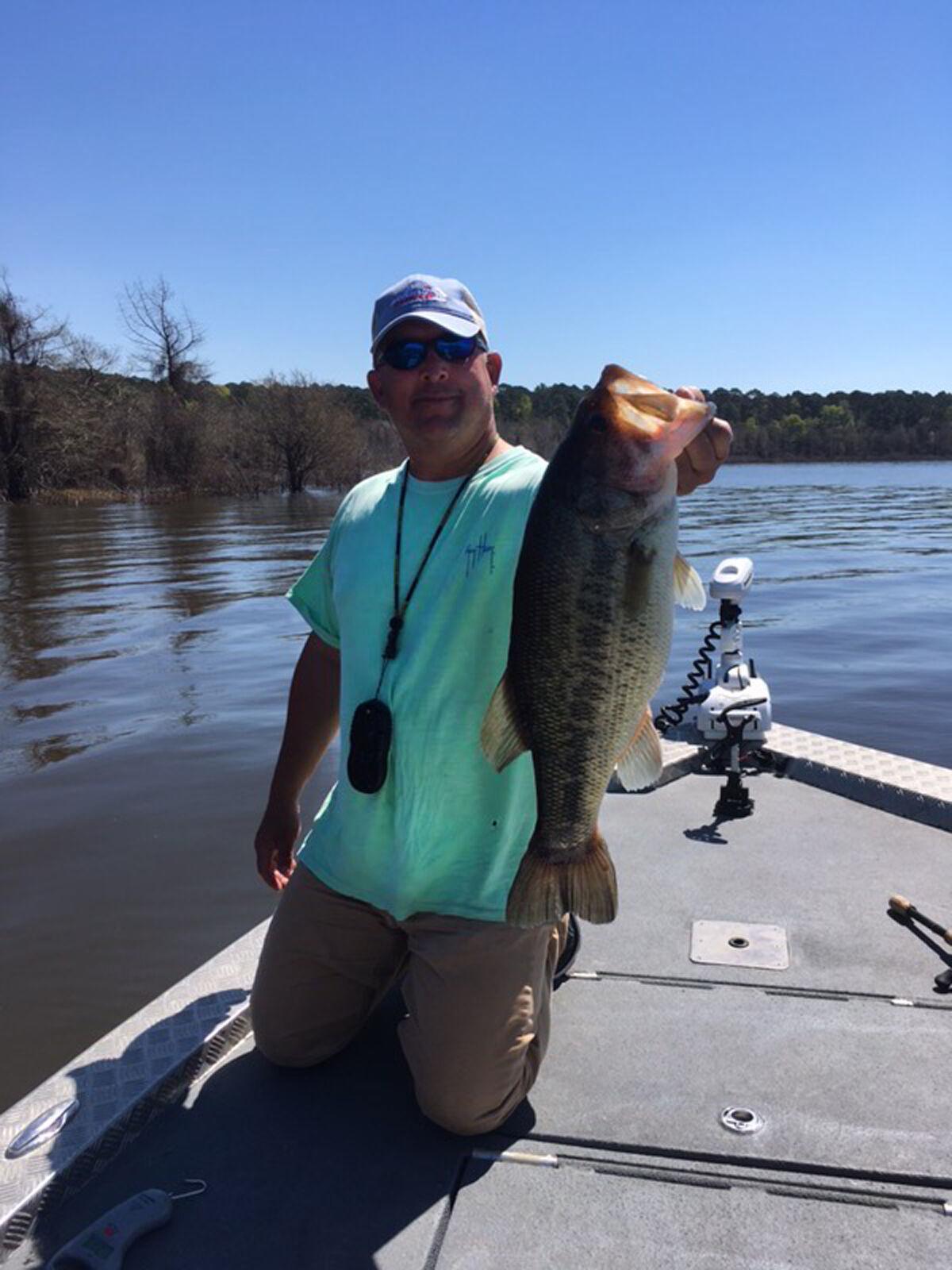 Dicky Fitzgerald, an all-around outdoorsman from Charenton, has been enjoying his return to bass fishing, particularly competitive bass fishing. He captured the Angler of the Year title in the Louisiana Bass Anglers. 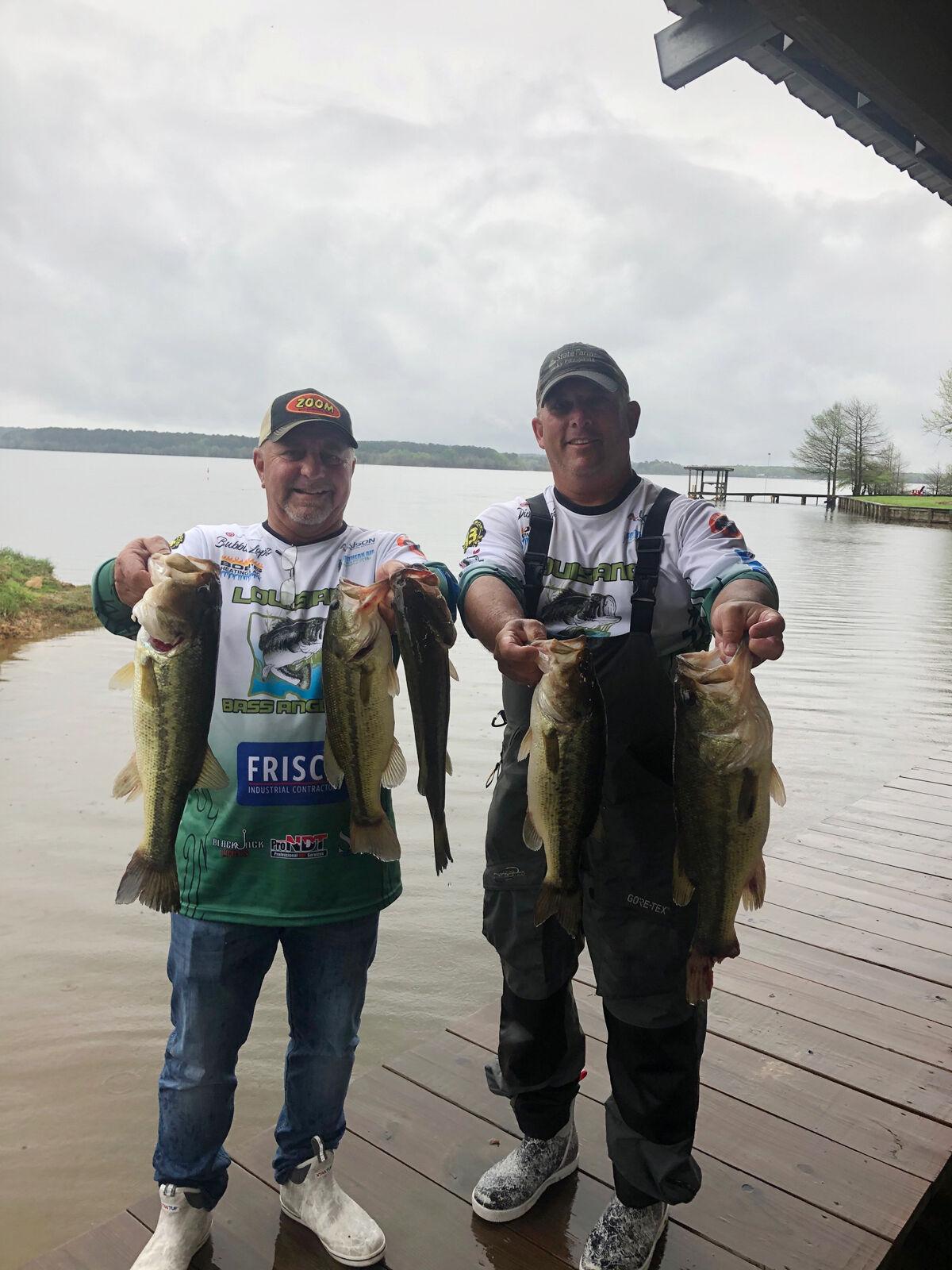 It went down to the 12th and final tournament of the year as Dicky Fitzgerald of Charenton, right, edged out his good friend and bass fishing buddy, Bubbie Lopez of Centerville, for the 2020 Angler of the Year title in the Louisiana Bass Anglers. Fitzgerald, a three-sport letterman who was a football standout at Hanson Memorial High School, and Lopez were one-two in the point standings but Fitzgerald prevailed.

Dicky Fitzgerald, an all-around outdoorsman from Charenton, has been enjoying his return to bass fishing, particularly competitive bass fishing. He captured the Angler of the Year title in the Louisiana Bass Anglers.

It went down to the 12th and final tournament of the year as Dicky Fitzgerald of Charenton, right, edged out his good friend and bass fishing buddy, Bubbie Lopez of Centerville, for the 2020 Angler of the Year title in the Louisiana Bass Anglers. Fitzgerald, a three-sport letterman who was a football standout at Hanson Memorial High School, and Lopez were one-two in the point standings but Fitzgerald prevailed.

CHARENTON — A Hanson Memorial High School graduate has transitioned from the days he stretched out for a first down or for the goal line to getting his line stretched by a keeper-sized bass, from the days he guided in a layup to punching a mat to a waiting bass and from throwing out a baserunner to dropping a big bass in the livewell.

It’s all about competing for a title and Dicky Fitzgerald of Charenton, 51, did just that Oct. 18 when he came from behind to win Angler of the Year in the largest and most competitive bass club in the Teche Area, the Louisiana Bass Anglers. To do so he leapfrogged past his fishing buddy, Bubbie Lopez of Centerville, in the 12th and final tournament of 2020 out of Myette Point Boat Landing in the Atchafalaya Basin.

Talk about nailing a comeback.

Fitzgerald’s first and last AOY title before this year was in the late 1990s, which, he said, came a few years after he was a co-founder of the bass club in the heart of St. Mary Parish.

“I fished hard for a while,” he said.

Bass club tournament fishing, however, took a backseat as he and his wife raised two daughters soon after that. He didn’t mind a bit while he cheered the equally athletic and competitive girls as they grew up and then, obviously, didn’t miss a beat when he got active again in the Louisiana Bass Anglers.

“I was third overall last year and Angler of the Year this year and that’s something to come back like that. There’s great competition in all these clubs now,” he said.

“It’s pretty special after being out from competitive fishing with these guys. I was out at least 10 years. It’s pretty satisfying to come back. It’s been a long time to do it so to come back to win it is awesome.”

Fitzgerald went into the 2020 regular-season finale trailing Lopez, 745-735, and their respective tournament weights for the year reflected the tight race as Fitzgerald had 119.93 pounds over Lopez’s 119.15 pounds.

Going into the last contest, Lopez posted on Facebook, “I have to finish one place ahead or behind him. It’s going to be a hard task. But whichever one wins it, we will celebrate together.”

“Bubbie and I fish together and scout together. Our club gets along so well. There’s great competition in our club,” Fitzgerald said.

Fitzgerald finished with 695 points and was followed by Lopez, 750; Michael Louviere, 673; Levi Louviere, 644; Johnny Hester, 600; Hank Harris, 597, and Gerald Buck Jr., 496. Harris will be unable to fish the Best Six next spring and will be replaced by Buck, Lopez announced.

Lopez also tipped his cap to the 2020 AOY and posted on Facebook, “I want to congratulate Dicky Fitzgerald on winning the Angler of the Year for 2020. We fought to the end.”

Fitzgerald, a State Farm Insurance agent in Morgan City, is as much at home on the water now in his 22-foot Sportsman’s Fabrication aluminum console boat built by Morgan City’s Casey St. Romain as he was on the football field, the basketball court and the baseball diamond at Hanson Memorial High School. He ripped off significant yards on the ground in the run-oriented Wing-T attack favored by his Louisiana Sports Hall of Fame coach, the late Richard McCloskey, to become a fan favorite in and around Franklin.

So many years later, the three-sport letterman said, “My main deal is fishing still gives me a way to compete.”

He has enjoyed the ride immensely.

“We’ve been together forever now,” he said.

Their two daughters followed in his competitive footsteps. The oldest, Carley, a speech therapist who is getting married in February, was a hurdler on the track and field team at Hanson. Casey, a junior business major at the University of Louisiana-Lafayette, played basketball and softball for the Tigers.

Fitzgerald pointed out both of the young women love to hunt and fish.

Carley is marrying a first cousin of Greer Billeaud, which is how Fitzgerald hooked up with the up-and-coming bass angler in the bass club’s regular-season finale out of Myette Point. They combined to catch and cull a five-bass limit weighing 15.83 pounds, a winning weight highlighted by the tournament’s biggest bass, a 4.63-pounder.

Young Hunter Neuville of Loreauville and Andre “Tank” Sampay of Conroe, Texas, formerly of Jeanerette, finished second with 14.45 pounds, a limit anchored by a 4.61-pounder.

The father-son team of Kerney Hebert and his son, Brandon Hebert, was third with 11.84 pounds.

Consistency is the key

Fitzgerald always strived to be consistent, just as he did in the weight room and on the practice field to hone his game.

“I think you have to be consistent all year long to be in the running,” he said, noting each bass club member can have two “drops,” striking his lowest point totals from the records.

Fitzgerald’s two drops were of 29 points and 40 points, he said.

One of his top goals before the stretch run was to make the Top Six. He wound up winning the bass club’s last two tournaments while fishing with fellow bass club member Mike Louviere, then Billeaud.

He fished the Myette Point area over the last four tournaments and offered the bass something different nearly each time, he said. In the crucial win at the end, Fitzgerald and Billeaud punched some and retrieved spinnerbaits and crank baits through their favorite waters just inside the West Atchafalaya Basin Protection Levee.

His “go-to” artificial lures on his title run were a spinnerbait and a bladed jig more than anything else throughout the year, he said.

The Louisiana Bass Anglers Classic was scheduled to be held Nov. 1 out of Myette Point Boat Landing. The competitive streak in Fitzgerald was hopeful of another win to celebrate.

“I think it would just put an exclamation mark on a great year,” he said.