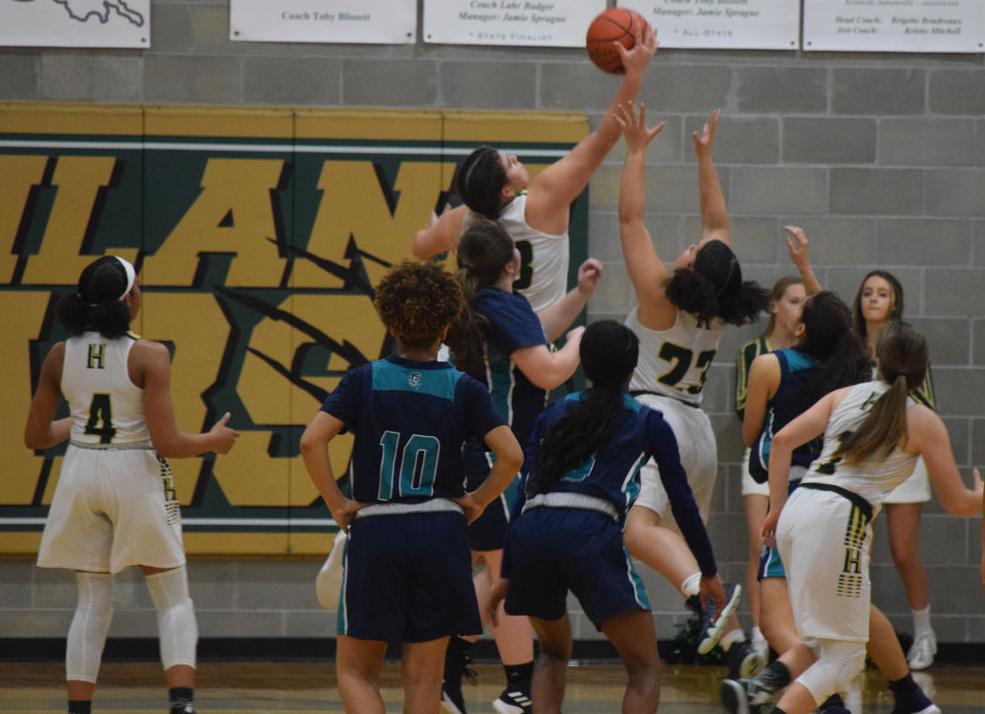 Highland Baptist junior Marin Barras (33) skies above everyone else to grab a rebound Friday night when the Lady Bears played host to Southside High. Barras scored 28 points as Highland beat the Lady Sharks. 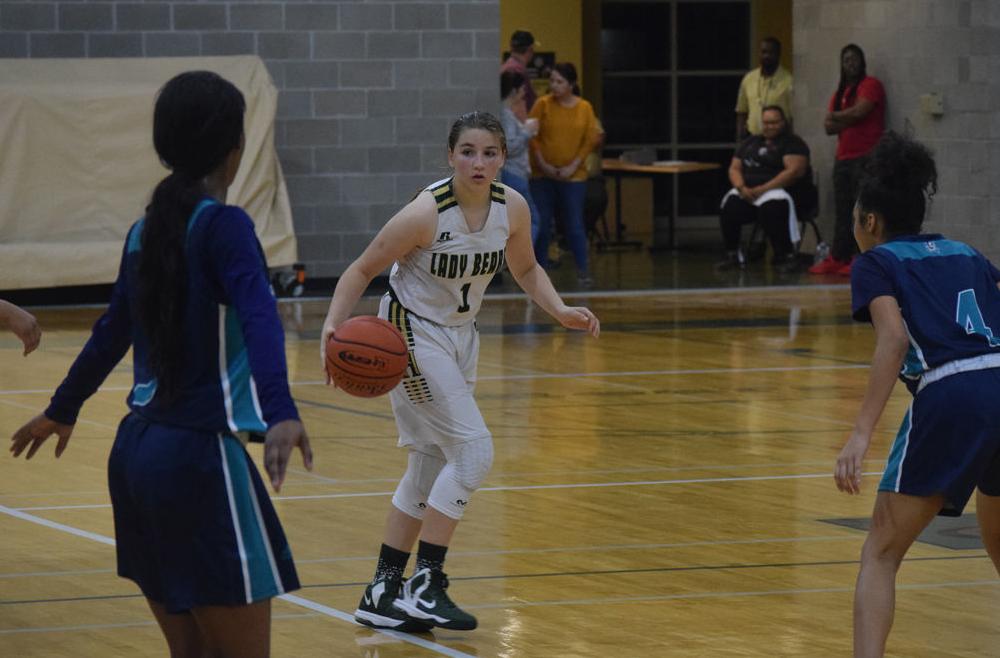 Highland Baptist’s Dusti Abshire (1) dribbles the ball against Southside Friday. Abshire hit three free throws late in the fourth quarter to tie the game and give HBCS a chance to win the non-district game, which they did 55-54.

Highland Baptist junior Marin Barras (33) skies above everyone else to grab a rebound Friday night when the Lady Bears played host to Southside High. Barras scored 28 points as Highland beat the Lady Sharks.

Highland Baptist’s Dusti Abshire (1) dribbles the ball against Southside Friday. Abshire hit three free throws late in the fourth quarter to tie the game and give HBCS a chance to win the non-district game, which they did 55-54.

For a long while Friday night, it seemed that Highland Baptist was going to cruise to a big win over Class 5A Southside High.

After all, Highland led most of the evening and eventually built a 16 point lead , 40-24, at the end of the third quarter.

Piece of cake, the rest of the way, right?

Well it turned out to be a very untasteful piece of cake as the Lady Sharks took advantage of turnovers, missed shot and missed free throws as Southside slowly came back in the fourth quarter, erased the double-digit Highland lead and built its own six point lead with about three minutes left in the contest.

But before Southside could put Highland away and lay claim to a great comeback win, the Lady Bears, thought grit, defense, effort and big dose of junior Marin Barras, mounted their own comeback and with a put-back of a missed jump shot by Braylee Derouen, her only basket of the game, Highland survived Southside’s attempted comeback and claimed the 55-54 win to improve to 16-3 overall as the Lady Bears get ready for Tuesday’s District 8-A opener at Central Catholic, a battle of teams that or fifth (CCHS) and sixth (HBCS) in the latest, unofficial LHSAA power rankings that were released Tuesday.

But before that key district contest, there was time to celebrate a remarkable win.

“We made it interesting,” HBCS coach Carole Sensley said. “Any time you go up like we did and get into foul trouble and miss as many free throws as we did, turn the ball over as many times as we did and still find a way to close out the basketball game.......You have to be proud of what they did.

“I’m proud of them, their composure. There is a lot to be cleaned up but the fact that they believed they could win and will their way to a win, that says something about them. That’s all I can say.”

What was turning into a laugher of a game quickly became a thriller as Highland survived all their mistakes and aggressive Southside defensive play in the second half.

“We got into foul trouble but like I tell my bench, everyone has to come in and everyone has to be important and for Dusti (Abshire) to step up to the line with confidence and tie the basketball game up with those three free throws, that started the push to will our way to the win.”

Down three with just over a minute left in the contest, Abshire, who finished with nine points, all of free throws in the second half, stepped up the line after being fouled attempting a 3-point play.

She buried all three free throws to tie the game and give Highland a chance to finish the what turned out to be a comeback win.

After Southside took a one point lead with less than 30 seconds left, Highland had one final chance to win as the Lady Bears missed a shot but the rebound fell to Derouen, who put up the ball and found the bottom of the net for a one point HBCS lead.

Which in most cases should have been enough for the win, however, Southside missed on final shot with 0.2 seconds on the clock and the ball went out of bounds.

But when Highland inbounded the ball, the long pass down the court went over everyone’s head and out of bounds on the other end, giving Southside one final shot at stealing the win.

According to LHSAA rules, the only possible shot with less than 0.3 on the clock is a tip-in. Southside had their tip-in chance, but the ball fell away from rim and the Lady Bears had their sixth straight win and eighth win in their last nine games.

“I’m just very proud of everyone on this team and what they did,” Sensley said.

Barras finished with 28 points and Jasey Roy added seven despite sitting most of the game on the bench with foul trouble.

Individual statistics for Southside were not available.