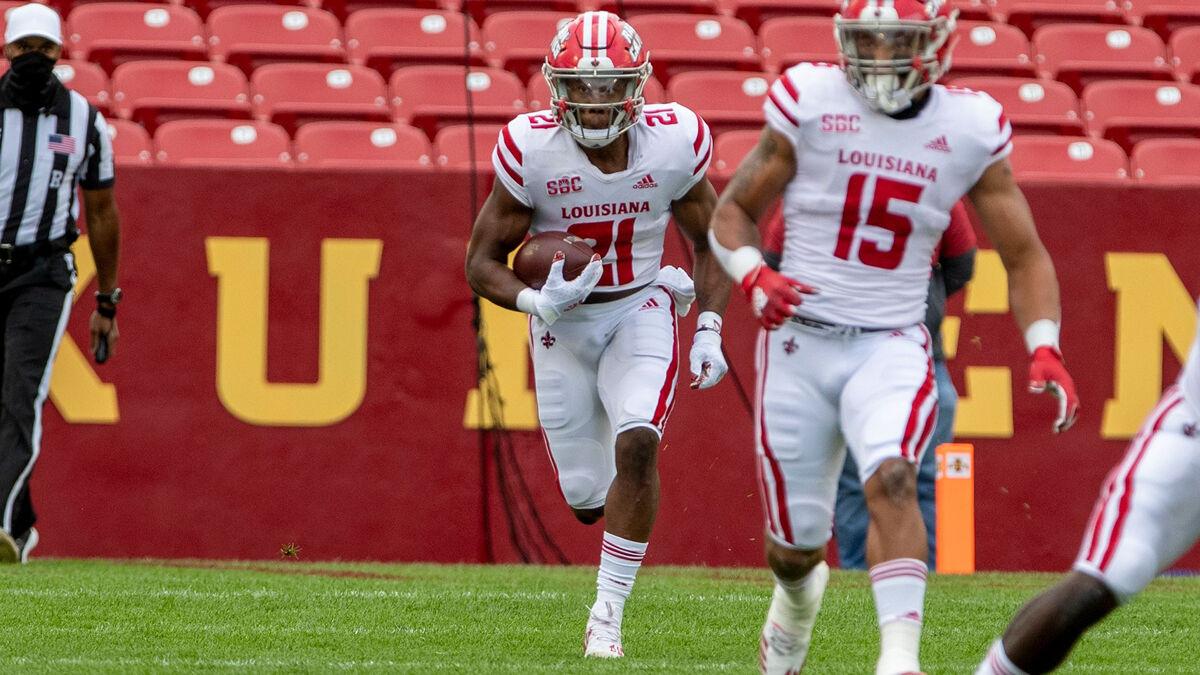 Chris Smith (21) returns a kick 95 yards for a touchdown for the Ragin’ Cajuns in a 31-14 win at No. 23 Iowa State on Saturday. It was one of three scoring plays of 75-plus yards for the Cajuns. 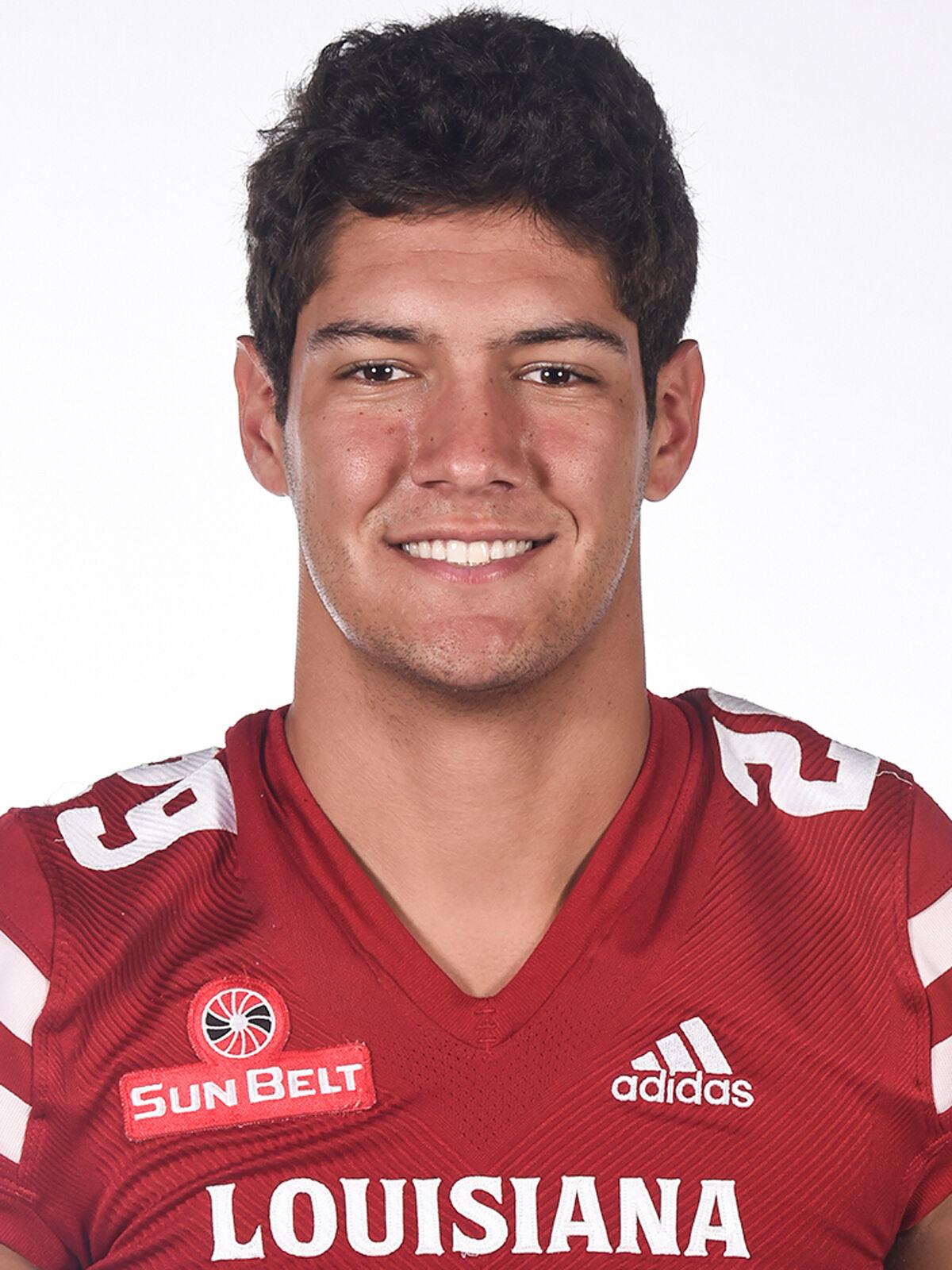 Chris Smith (21) returns a kick 95 yards for a touchdown for the Ragin’ Cajuns in a 31-14 win at No. 23 Iowa State on Saturday. It was one of three scoring plays of 75-plus yards for the Cajuns.

Texas A&M finally has some company.

Before Saturday’s season opener, the University of Louisiana at Lafayette football program had only defeated a team ranked in The Associated Press Top 25 Poll once before. That historic moment came on a muggy night at Cajun Field back in 1996, when the then-University of Southwestern Louisiana forced eight turnovers to upset No. 25 Texas A&M, 29-22.

On Saturday, the Ragin’ Cajuns made sure that the Aggies had some company in the program’s record books as UL pulled off the upset in a 31-14 road victory over No. 23 Iowa State, the first road win for the team against a Top 25 opponent.

“For us to come out here and beat them shows that we are here and that we are ready to play,” Cajuns running back-returner Chris Smith said. “This team is special.”

Things didn’t start too well for the Cajuns inside a nearly barren Jack Trice Stadium which was sparsely filled with only members of the Cyclones’ marching band, cheerleaders and some family members due to COVID-19 restrictions.

The Cajuns’ offense sputtered to get anything going. For the game, UL Lafayette didn’t have a single running back eclipse 50 yards on the ground as the team managed only 118 rushing yards. Senior quarterback Levi Lewis was efficient, completing 13 of 21 passes but only had 154 yards through the air.

In fact, Louisiana had fewer first downs, fewer rushing yards, fewer total yards and less time of possession than Iowa State. Not to mention that the Cajuns left points on the board as kicker Nate Synder — a grad transfer from Indiana — missed a pair of chip-shot field goals.

But the Ragin’ Cajuns seized control of the game with a trio of big scoring plays.

With 4:28 left in the first half, Iowa State had just taken its first lead of the game with an eight-play, 49-yard drive capped with a one-yard touchdown by Kene Nwangwu. Smith took the ensuing kickoff and raced down the left sideline for a 95-yard touchdown.

“We started off a little slow and we needed to get something going,” Smith said. “They said ‘Chris we need you, we need you.’ They gave me a chance and I am going to show them what I can do. They don’t know too much about me. So that was my chance to show them that I am here and I am ready.”

The second big-play score was a touchdown pass between Lewis and sophomore wide receiver Peter LeBlanc that gave the Cajuns a 17-14 lead in the third quarter. The former Catholic High star got behind the Cyclone safety and Lewis hit him in stride for a 78-yard touchdown.

LeBlanc led all receivers with five receptions for 82 yards.

“I was glad that the coaching staff called a shot there,” Lewis said. “I had my options, went with P and he got open and came through with an amazing route.”

The third and final big play was an 84-yard punt return by Eric Garror in the fourth quarter that extended the Cajuns lead to 24-14. Garror’s score was the program’s first punt return for a touchdown since 2015.

“I gave Coach Disch (Cajuns special team coordinator Robby Discher) a huge shout out. We actually got him to dance in the locker room just now,” Napier said. “Both of those game-changing plays were well thought out conceptually. We knew exactly what we were doing. The players went out there and executed it.”

“Chris is dynamic and Eric has been dynamic,” Napier added. “If you remember back to last year Eric had several called back. We know what he is capable of.”

The other reason the Cajuns sealed their first win over a Power 5 opponent since beating Kansas State in 2009 was the play of the defense in the second half.

The Ragin’ Cajuns forced a turnover on downs on the Cyclones’ opening drive of the third quarter as Asjilin Washington batted down a pass from Iowa State quarterback Brock Purdy on fourth down. The Cajuns’ defense answered the call on the Cyclones’ next possession when Washington picked off Purdy by taking the ball out of the hands of Iowa State’s Xavier Hutchinson along the sideline.

Even though the Ragin’ Cajuns didn’t capitalize on either of those turnovers with points — just like they were unable to do in the first quarter with Percy Butler’s fumble recovery — the Cajuns were stifling the Cyclones’ high-powered offense which averaged 32 points and 444 yards per game in 2019.

Iowa State was held to only 99 yards of total offense in the second half, didn’t cross midfield in the fourth quarter, and Purdy went 7-of-19 for 45 yards with one interception in the final two quarters.

“I think we limited the running game,” Napier said. “There was only a handful of explosive runs today. Then making throwing the ball in tight coverage, pushing the pocket and keeping the guy in the pocket. We created some negative plays on early downs and got them behind the sticks. I think in general that the plan worked.”

The Ragin’ Cajuns closed out the game with a methodical drive. UL Lafayette put together an 11-play, 56-yard drive that chewed up 7:01 off the clock and capped by a two-yard touchdown run by Trey Ragas.

UL Lafayette will now turn its attention to its Sun Belt Conference opener on the road in Atlanta next Saturday against Georgia State. The Cajuns will take some time to enjoy Saturday’s signature victory, especially after an offseason dealing with a pandemic and the sudden death of assistant coach DJ Looney at the age of 31.

“I do think it is important that we made a lot of mistakes today and this is just part of the journey,” Napier said. “No one is going to care if you go lose a couple in the next few weeks after winning here today. We are going to enjoy tonight but we will come back to Earth tomorrow and starting getting ready for next week.”

LeBlanc making a name for himself with Cajuns

LAFAYETTE — Peter LeBlanc waited until after the game to relish the significant personal moment.