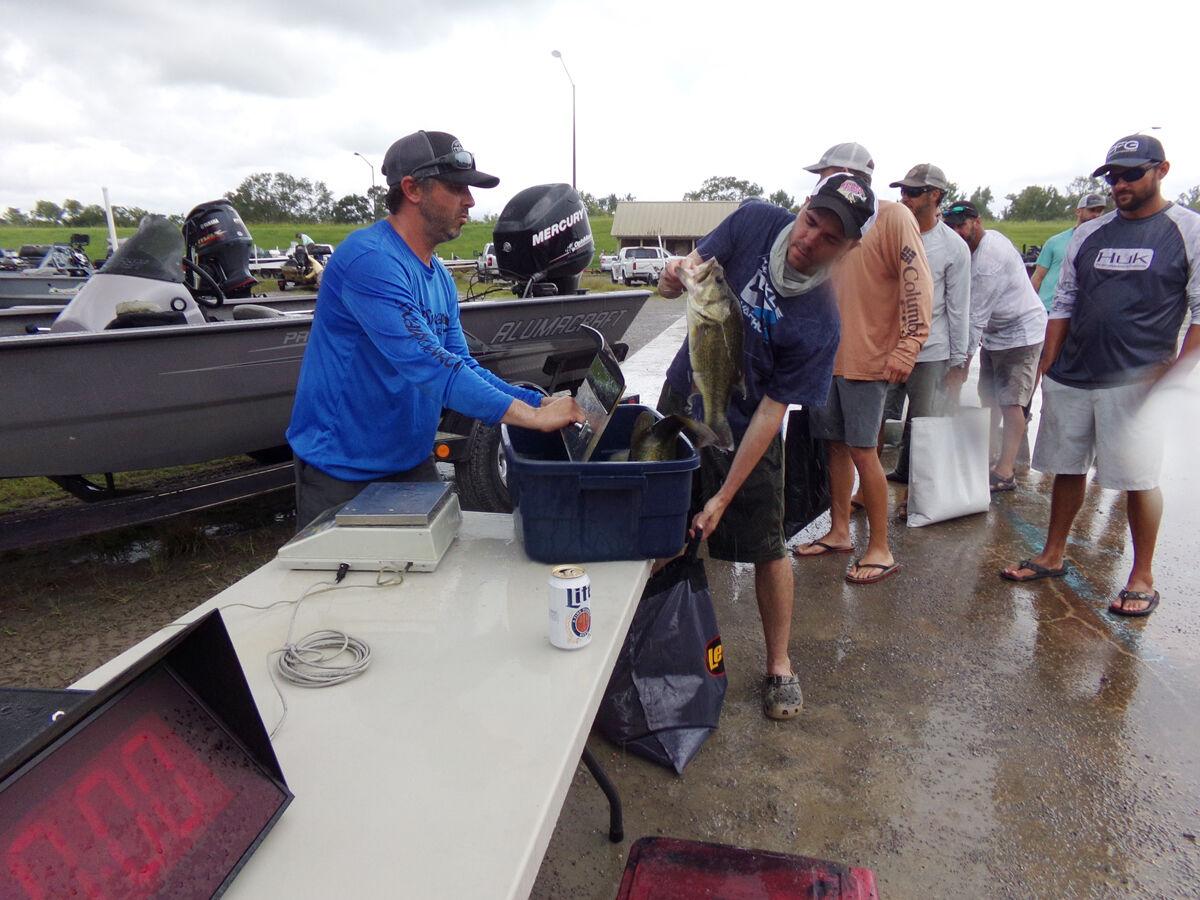 Jacob Shoopman, right, prepares to place a 4.89-pound bass in the weigh-in basket Saturday afternoon to be weighed by Atchafalaya Bassmasters member John Pecararo at Myette Point Boat Landing in the Atchafalaya Basin. Shoopman and his father, Don Shoopman, both of New Iberia, topped the 23-team field with a five-bass limit weighing 15.94 pounds. They also boasted the day’s biggest bass, a 4.89-pounder. 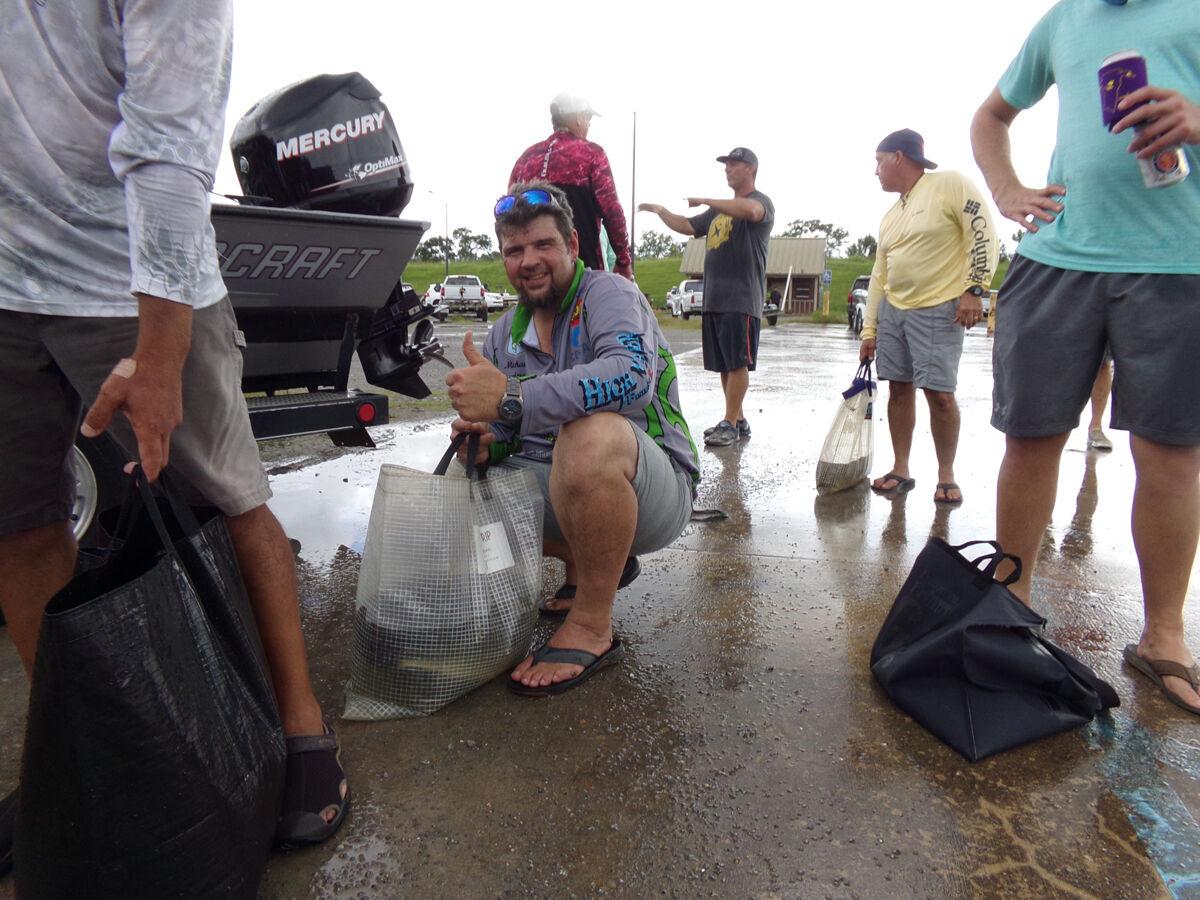 Mike Louviere of Loreauville gives the thumbs up sign as he waits to weigh in a five-bass limit Saturday afternoon during the Atchafalaya Bassmasters Open tournament at Myette Point Boat Landing in the Atchafalaya Basin. Louviere and Chris Vedrines of New Iberia finished second with five bass weighing 15.58 pounds. 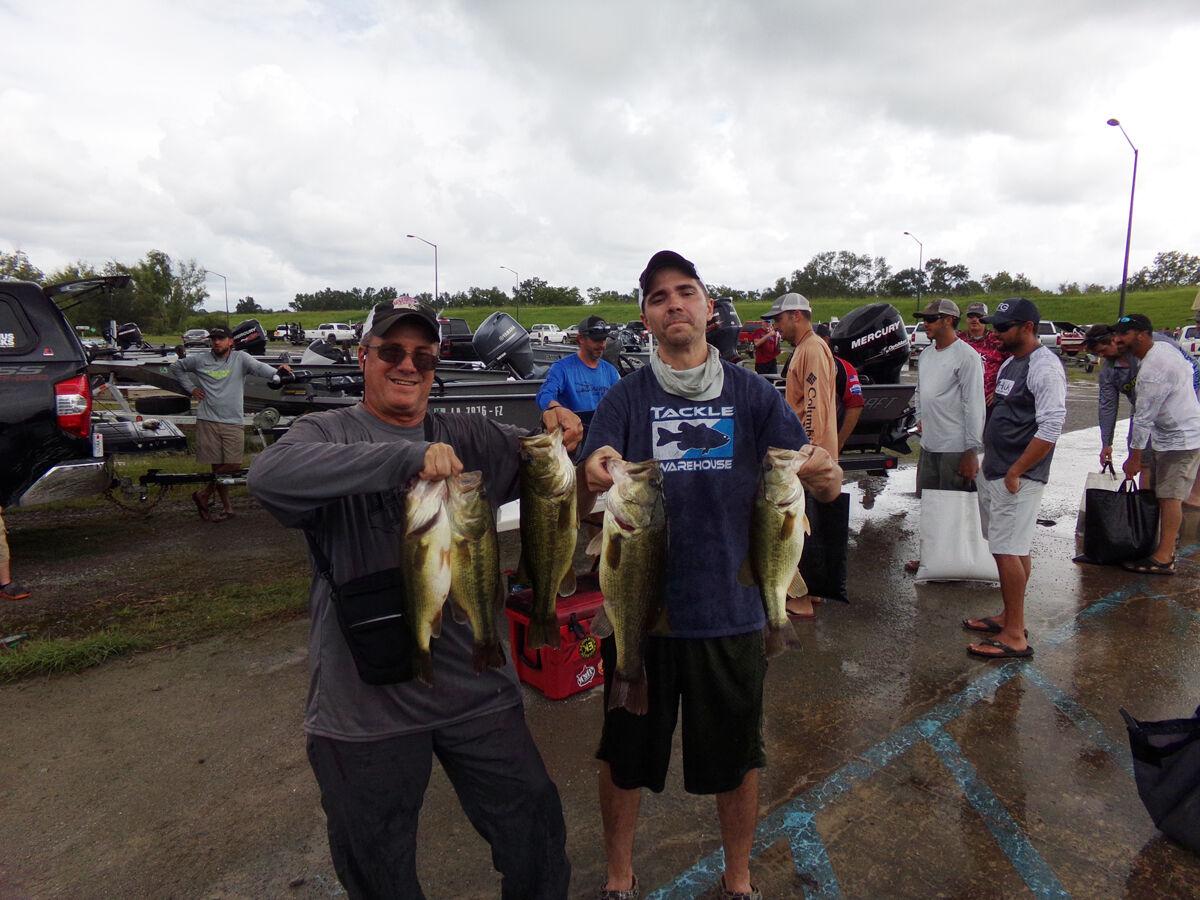 Don Shoopman, left, and his son, Jacon Shoopman, both of New Iberia, hold the five bass that won the Atchafalaya Bassmasters Open on Saturday out of Myette Point boat Landing in the Atchafalaya Basin. Their limit weighed an unbeatable 15.94 pounds worth $615 pounds and their 4.89-pounder, the tournament's biggest bass, netted another $220. Twenty-three boats fished despite a forecast of rain for that day.

Jacob Shoopman, right, prepares to place a 4.89-pound bass in the weigh-in basket Saturday afternoon to be weighed by Atchafalaya Bassmasters member John Pecararo at Myette Point Boat Landing in the Atchafalaya Basin. Shoopman and his father, Don Shoopman, both of New Iberia, topped the 23-team field with a five-bass limit weighing 15.94 pounds. They also boasted the day’s biggest bass, a 4.89-pounder.

Mike Louviere of Loreauville gives the thumbs up sign as he waits to weigh in a five-bass limit Saturday afternoon during the Atchafalaya Bassmasters Open tournament at Myette Point Boat Landing in the Atchafalaya Basin. Louviere and Chris Vedrines of New Iberia finished second with five bass weighing 15.58 pounds.

Don Shoopman, left, and his son, Jacon Shoopman, both of New Iberia, hold the five bass that won the Atchafalaya Bassmasters Open on Saturday out of Myette Point boat Landing in the Atchafalaya Basin. Their limit weighed an unbeatable 15.94 pounds worth $615 pounds and their 4.89-pounder, the tournament's biggest bass, netted another $220. Twenty-three boats fished despite a forecast of rain for that day.

MYETTE POINT — It took only three minutes of fishing after the first cast time for Jacob Shoopman of New Iberia to net the first keeper of the Atchafalaya Bassmasters Open fundraising fishing tournament on July 25.

Though Shoopman, 32, and his dad, 67-year-old Don Shoopman of New Iberia, didn’t come close to that 4.89-pound bass the rest of the day as they fished a borrow pit in the Atchafalaya Basin, that first fish set the tone for the two on the way to winning the 23-boat tournament and bringing home the first-place prize money. That first fish also ended up being the big bass of the tournament.

“And then he just put on a clinic the rest of the day.”

The younger Shoopman had to flip the bass in the boat as his dad “wasn’t on his game” with the net, Don Shoopman said.

“It was kind of funny,” Jacob Shoopman said. “He had a bait caught up in the net, and so I kind of just said screw it and flipped it on in the boat instead of waiting for him or getting down and trying to lift him. He might’ve hit the side a little bit before bouncing in, but he got in the boat.”

Don Shoopman, who retired in January of 2019 as the news editor of The Daily Iberian, said his son caught four fish fairly quickly that Saturday morning, but then the two hit a dry spell for a bit before catching a fifth to reach the limit.

“I think we had four keepers and maybe a couple of small ones in that first hour,” Jacob Shoopman said. “It did take a while before we got bit again after that first hour” with the next keeper coming around 7 or 7:30 a.m.

The rest of the day was spent culling. Don Shoopman said he thinks the last catch helped preserve their win over second-place Michael Louviere and Chris Vidrine by less than half a pound, with a 2 3/4-pounder replacing a 2 1/2-pounder close to the end of the day’s fishing.

The Shoopmans finished with a 15.94-pound limit, with Louviere and Vidrine finishing with 15.58 pounds. Andre Cazelot and Joey Gautreaux were third with 14.97 pounds.

“We made a move probably around 11:30 after not getting bit in our area for about an hour, and it ended up paying off. We were able to take one more before weigh-in that upgraded, so that was pretty cool,” Jacob Shoopman said. “I knew the Basin was fishing well, and in normal years 16 pounds will get it done. The kind of fishing they’ve been catching a lot this year, I was kind of nervous somebody could beat that. Fortunately, we were able to eke it out.”

Because of that he wasn’t sure how they’d fare at weigh-in.

The tournament ended up with fewer boats than anticipated because of forecasts for bad weather — which, incidentally, held off until weigh-in time at 2 p.m. — but tournament officials said the turnout was nice. Eighteen boats weighed five-fish limits. Don Shoopman said he figured 30 or more boats would’ve fished the tournament if the forecast would’ve been for good weather.

Don Shoopman said he wasn’t sure if any of the fish he caught were in the final tally, though one may have been.

“I hardly helped at all,” he said. “You know, I was the net man. The only thing I can compare it to is a pitcher in the zone pitching a no-hitter. You might get a few walks, because he did miss a few, but not many. He was having the time of his life.

“I’m a proud pop to watch him bass fish. He doesn’t ever stop. The boy was nailing them more often than not.”

His dad said that pretty much if they bit they ended up in the boat, though he did get broke off once by what might’ve been a 6-pounder.

Don Shoopman has been bass fishing in the area since arriving from his hometown of Kansas City, Missouri, in December of 1975, and still loves it. Fishing with his son makes it even better.

The elder Shoopman started taking his younger son fishing around the time he started walking, he said. The two like spending the time together, and they’re currently in a battle with two-time defending Anglers of the Year Ben and Zach Suit for the Wednesday Night Hawg Fight BTS AoY crown.

“I’ve been fishing Hawg Fights with him since he was in high school,” Don Shoopman said. “And as much as we could when he was in college (at Southeastern Louisiana University). I fish a lot with him. Now he’s teaching the teacher.”

“Like I told him before this year started, let’s just make everything into having fun, and things will fall where they will, and it’s turned into a pretty good year for us so far,” Jacob Shoopman said.

The Shoopmans won the Hawg Fight title in 2015. They enjoy fishing the tournament because the younger Shoopman, who can’t fish weekend tournaments very often because of his job as a merchandiser for Coca-Cola locally.

It’ll be tough catching the Suits in the Hawg Fights, he said, because the brothers are fishing well, but both teams will try their hardest the next couple of tournaments so it should be enjoyable.

“Fishing’s fishing, it’s going to be tough,” Don Shoopman said. “But they’re our best friends, so you can’t go wrong.”

Just the night before the Shoopmans had attended Zach Suit’s wedding, and while Don left around 10 p.m. his son stayed until the end of the festivities. That didn’t seem to affect their effort Saturday. Jacob Shoopman said he was a little tired after getting up at 4 a.m. for the tournament but by the time they hit the water he was feeling fine, and the 5-pounder really woke him up.

“It helps to be young,” his dad said with a laugh.

The two used the SuperBait buzz baits made by Bill Shoopman of KC, Don Shoopman’s brother. Jacob Shoopman said he caught a few others on a swim jig after they stopped biting as much on the buzz baits.

“Especially for the evening tournaments, that’s (SuperBaits) about all we throw,” Jacob Shoopman said. “For daylong tournaments, once the the sun comes up they get off that bite a little bit. We pretty much keep them locked in our hands every time we fish, so that’s what caught most of our fish Saturday.”

“It was a lot slower after that start because we had the sun out, and the sun doesn’t like buzz baits much,” Don Shoopman said.

The younger Shoopman had prefished on Monday, heading out to several areas on this side of the basin. His next-to-last stop he caught some really good fish, his dad said, so they were confident about that spot near the levee for Wednesday and Saturday tournaments.

Though the results weren’t as good for the Wednesday Night Hawg Fights Bass Tournament Series or the Saturday tournament in the area he scouted on Monday, it was still good enough to let the father-and-son team finish second in that Wednesday tournament and first on Saturday.

“It was an area that did a lot better on Monday than on Wednesday or Saturday,” Jacob Shoopman said. “It was an area from Monday I knew had some big fish in it. I didn’t even go scout on Tuesday, but it ended up paying off in both tournaments. I was expecting to do a little better Wednesday night but I didn’t really get the big bite I was hoping for, but at least we got one of those bites on Saturday morning.”

That first fish proved to be good enough, though.

“I just tossed him in the livewell quick and got back to fishing,” he said. “I thought we’d get a few more big bites like that, and it didn’t happen, so I hadn’t really paid attention to how big she was.”

The two had considered fishing the Westside Bassmasters Open tournament out of Doiron’s Landing in Morgan City but when they found out about the one starting closer to home, decided to enter the Atchafalaya Bassmasters event instead.

“It was a good time,” Jacob Shoopman said. “The hosts did a really good job of putting it on. I think the weather probably scared a few more boats away from fishing, but other than that I thought it was a pretty fun tournament to fish.”