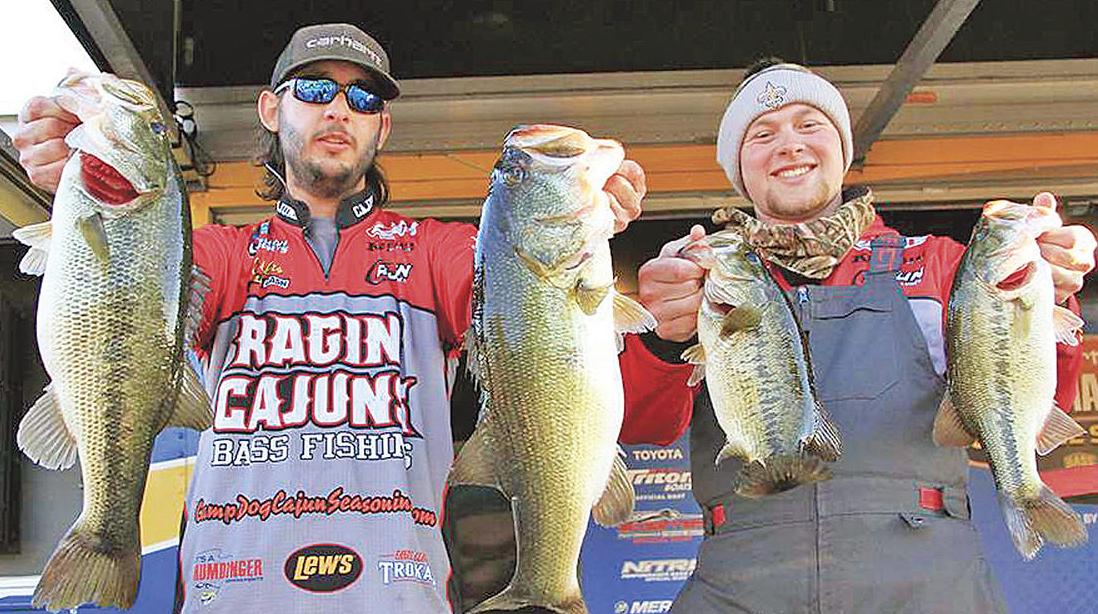 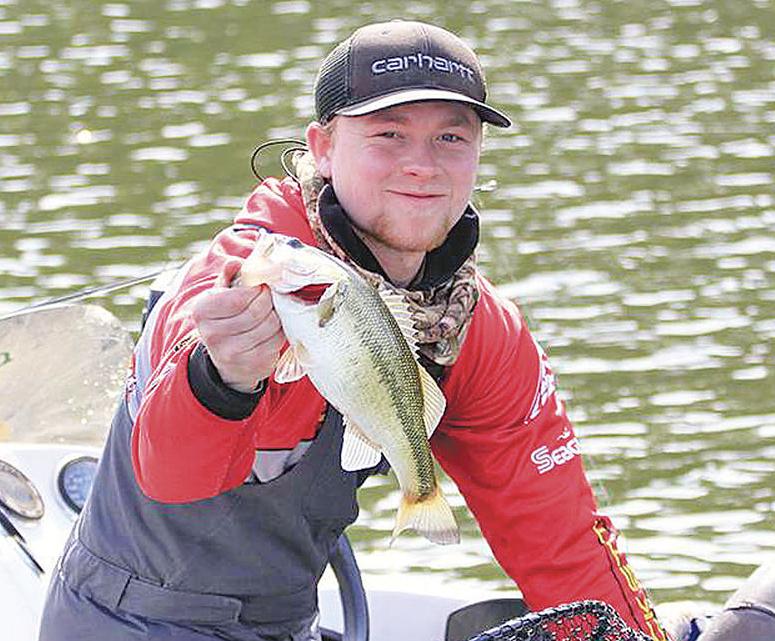 A Bassmaster camera boat was on hand to catch a shot of Charles "T.J." Norris after he caught a bass on the third and final day of the collegiate bass tournament at Toledo Bend. Norris and Braxton Resweber of St. Martinville, representing the University of Louisiana at Lafayette, finished eighth in the tournament. 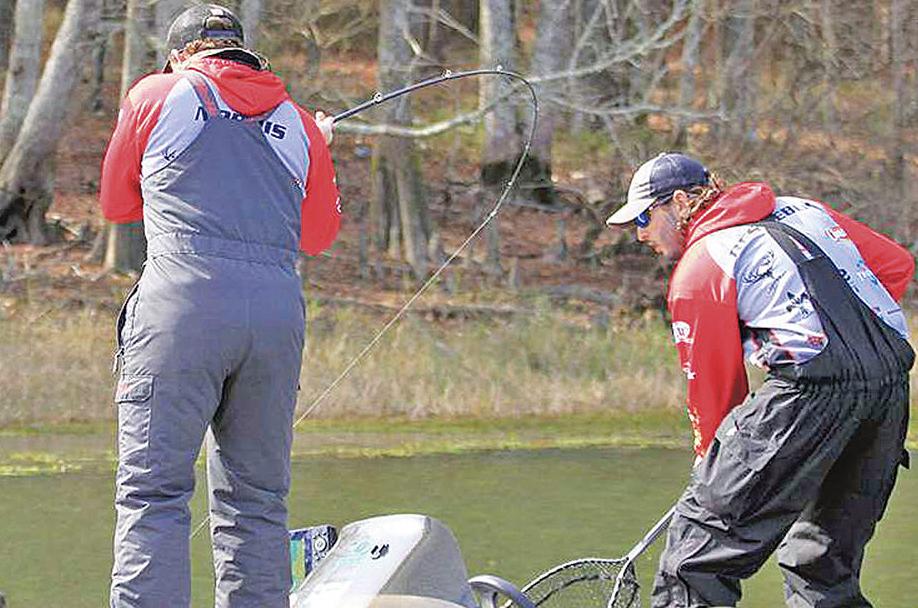 Braxton Resweber, right, is ready with the net to land a bass hooked by Charles "T.J." Norris on the third and final day of a collegiate bass tournament at Toledo Bend. 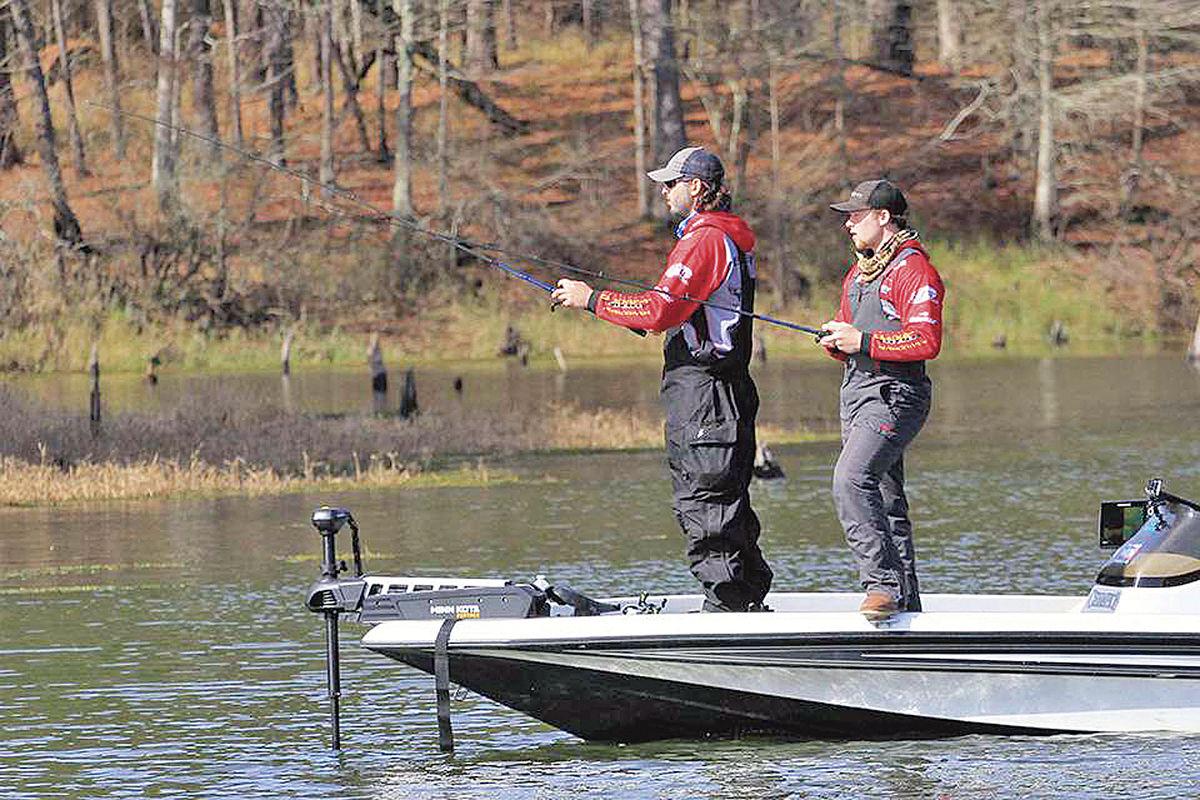 A Bassmaster camera boat was on hand to catch a shot of Charles "T.J." Norris after he caught a bass on the third and final day of the collegiate bass tournament at Toledo Bend. Norris and Braxton Resweber of St. Martinville, representing the University of Louisiana at Lafayette, finished eighth in the tournament.

Braxton Resweber, right, is ready with the net to land a bass hooked by Charles "T.J." Norris on the third and final day of a collegiate bass tournament at Toledo Bend.

MANY — St. Martinville bass angler Braxton Resweber hoped some or all four of the bass in his 19-foot Champion bass boat’s livewell would be swimming free, i.e. culled, later in the day if bigger bass started biting on the third and final day of the Carhartt Bassmaster College Series tournament at Toledo Bend.

Resweber and Charles “T.J.” Norris, his University of Louisiana at Lafayette Fishing Team tournament partner from New Iberia, caught those four bass early on Jan. 25. Going into the day of reckoning, the Teche Area bass anglers were in third place with 34 pounds, 2 ounces, 4 pounds behind a powerhouse two-man team from Tennessee’s Bethel University.

They were primed for a comeback effort but those four 2-pound class bass wouldn’t do the job.

“We would have had to catch a real big bag, but … it is Toledo Bend,” Resweber said, pausing before emphasizing the last four words, meaning 25-pound sacks are possible.

Unfortunately, the bite they benefitted the most from the previous two days, particularly Friday, the 24th, was later and later each day. They culled once to a five-bass limit for 16 pounds, 2 ounces, Thursday, and culled once to a limit at 18 pounds, 4 ounces, Friday, to make the cut for the Top 12 finals in a field of nearly 250 two-man teams representing colleges across the country.

It didn’t happen the third day.

“We had four keepers pretty quick. I could kind of tell. The first day they bit late and the second day a little later. I was hoping we’d get lucky toward the end of the day but it just didn’t work out,” Resweber said about the four bass they weighed at Cypress Bend Resort for 7 pounds, 10 ounces, and a three-day total of 42 pounds, good enough for eighth place.

It was a lofty finish following their first-place finish in the Outlaw Outdoors College National Championship Qualifier on Nov. 16 at nearby Lake Sam Rayburn in Texas. That victory gave Resweber and Norris a berth in the 2020 Carhartt Bassmaster College Series National Championship, which will be held later this year at a site to be announced later.

Huff and Pierce relied on a steady stream of 3½- to 4½-pound bass, mostly in 20- to 60-foot depths. They targeted larger ditches and channel curves where shad were concentrated.

“We caught them on jigging spoons. There wasn’t much to it. We just had to get it down there quick. Those fish are always moving and following shad. All we had to do was get it in front of their face,” Huff said.

They did just that on Thursday to surge ahead of the pack with a five-bass limit weighing 19 pounds, 11 ounces, then returned to the scale the second day to protect the lead with another limit at 19 pounds, 13 ounces.

The winners saved their best for last with a limit Saturday weighing 20 pounds, 15 ounces.

Huff’s victory continued a red-hot streak in which he has led on six straight days in Bassmaster events.  He previously won all three of his matches in the Bassmaster College Series Classic Bracket tournament on Tennessee’s Watts Bar Lake in August 2019, a feat that qualified him for the 2020 Bassmaster Classic on March 6-8 at Alabama’s Lake Guntersville.

Resweber and Norris’ highlight of the three-day tournament here was the second day. However, it sure didn’t start out positively in the major creek on the Texas side below Pendleton Bridge where Resweber scouted the weekend before the Carhartt Bassmaster College Series tournament at Toledo Bend.

“We go in there and catch one right off the bat (on a Senko),” the 22-year-old St. Martinville bass angler said, noting the pattern was to fish Senkos s-l-o-w-l-y and Rat-L-Traps in 4- to 15-foot depths.

“At 2 o’clock, we had one fish. But there were three grass mats in there that we hadn’t punched the day before. You know me (he loves to punch soft plastics through grass mats). So we went back there,” he said, noting he picked up his punchin’ rod with a green pumpkin Cajun Lures Bayou Bug under a 1 ½-ounce weight.

On back-to-back casts starting the final hour of fishing, Resweber caught a 2-pounder and a 3 ½-pounder. Things were looking up.

“After I caught those two right there, I looked across and there was another grass mat. We went fish that one. I punched in there and caught a 6 1/2, so that was four keepers right there. Then we went back to the little holes with logs and caught a 5- and a 3-pounder at the end of the day. It all happened between 2 and 3 o’clock,” he said.

“The little holes with logs” paid off for them Thursday. Resweber’s main pattern in the creek was to fish Senkos and Rat-L-Traps. At the back of the creek, after crossing a flat in 4-foot depths, were two 12-foot holes with sunken logs at the bottom.

While prefishing the creek, Resweber found shad and bass suspended in 15-foot depths, he said. On the first day of the tournament, the water temperature had dropped 15 degrees and the shad were gone.

Enough bass still were there for them to make a game of it.

They caught three keepers on gold ½-ounce Rat-L-Traps before 8 a.m. the first day. When the bass stopped biting, the two area bassers trolling motored to the deep holes at the back and boated three keepers, including a 5- and a 3-pound bass.

“They were real fat. They were prespawn fish. We got out of there,” Resweber said.

The area team has double-qualified for the 2020 Carhartt Bassmaster College Series National Championship. That gives the second-place team behind them at Lake Sam Rayburn, Texas A&M-Galveston’s Derek Pietsch and Trey Dawson, a berth in the prestigious college tournament.

A Bassmaster spokesman gave the qualifiers a hint last week on the date and the site, Resweber said.