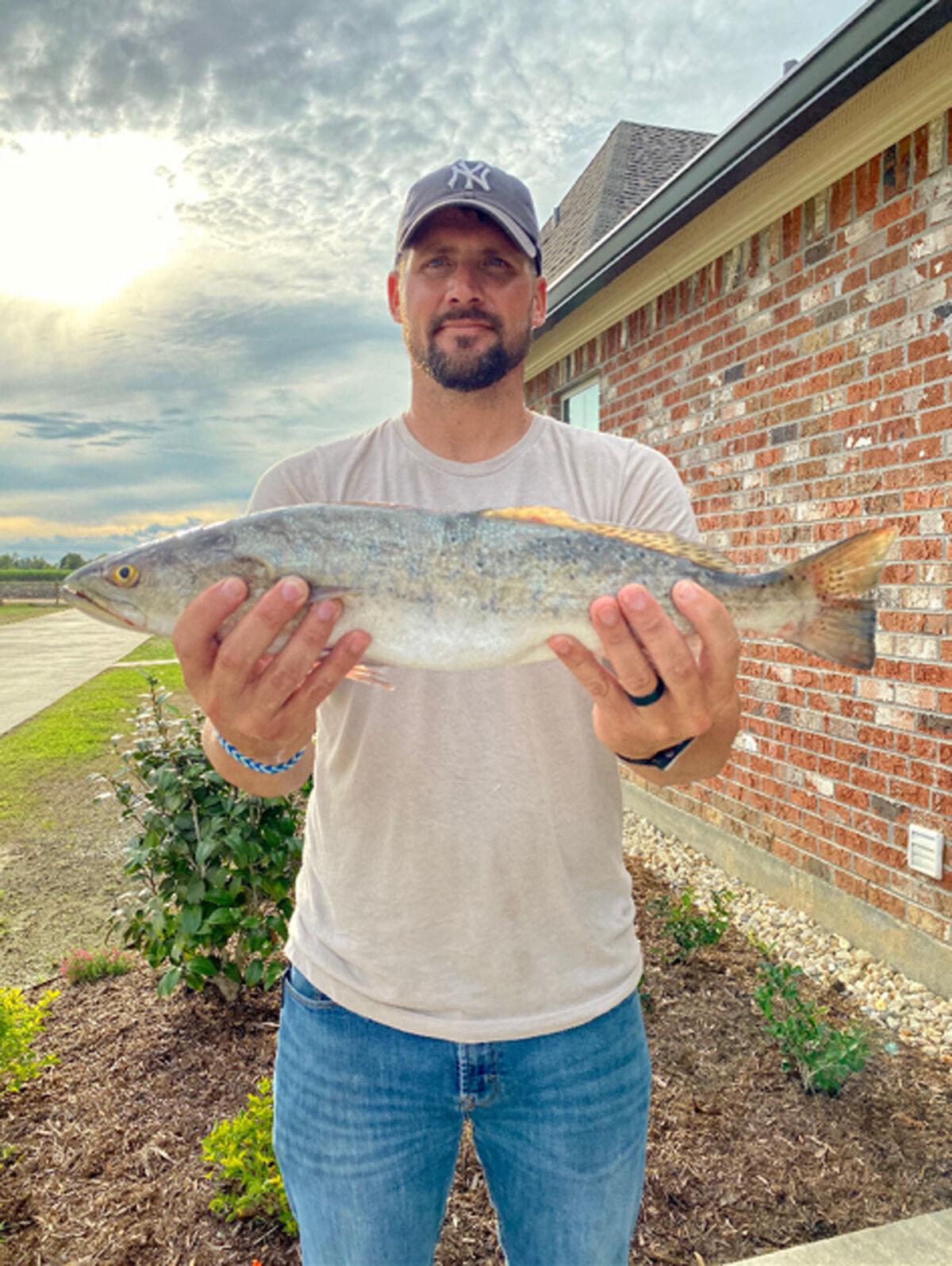 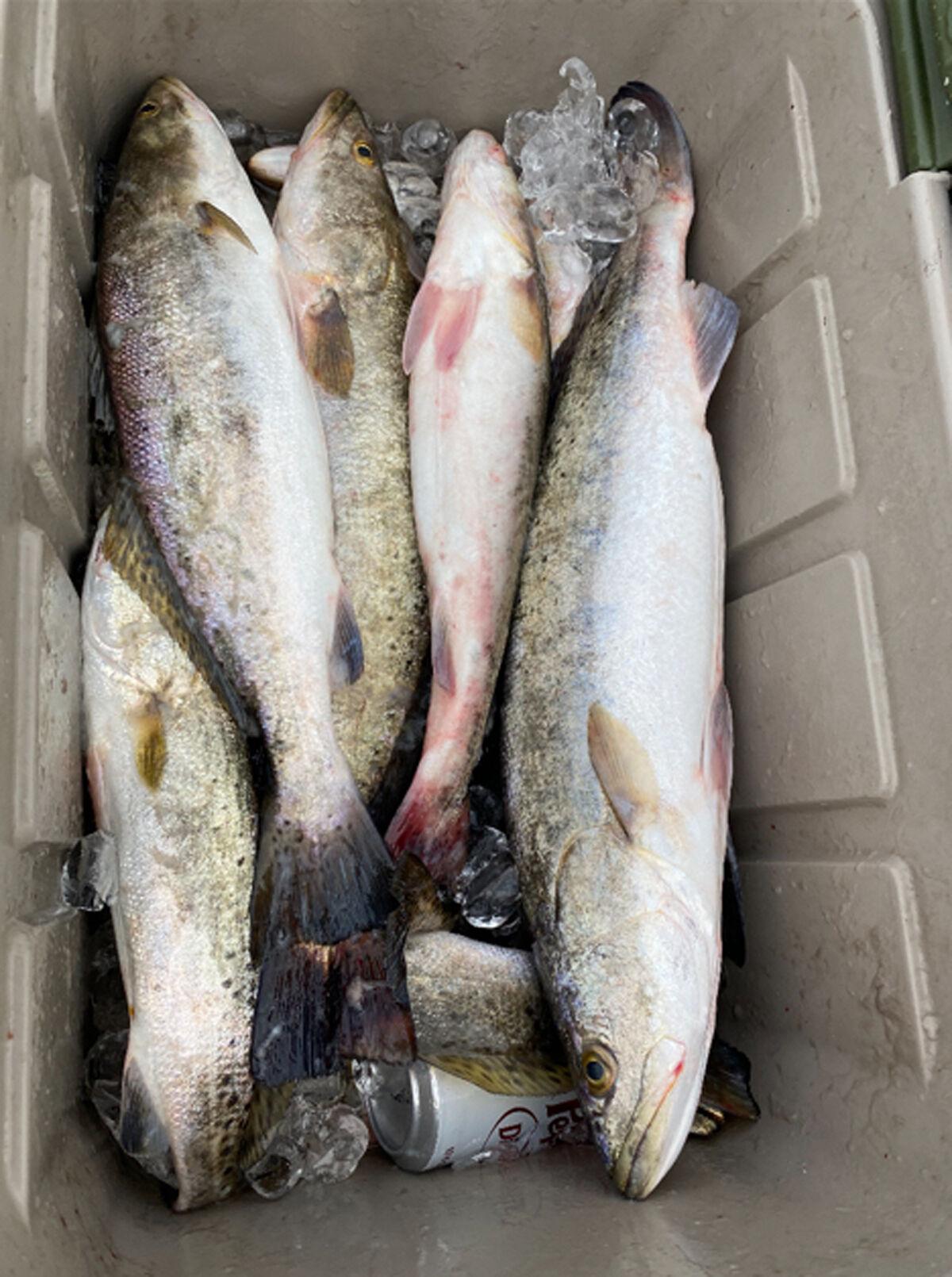 A 3.56-pound speckled trout, right, touches both ends of an ice chest after it was deposited in there Thursday by Bo Amy of New Iberia. The big fish vaulted to the top of the leaderboard in the Cypremort Invitational Fishing Association tournament that ends Wednesday.

A 3.56-pound speckled trout, right, touches both ends of an ice chest after it was deposited in there Thursday by Bo Amy of New Iberia. The big fish vaulted to the top of the leaderboard in the Cypremort Invitational Fishing Association tournament that ends Wednesday.

Until, that is, a 3.56-pound speckled trout bit late that Friday afternoon. It almost got away when he missed it the first time with the landing net, then eventually wound up in the ice chest.

Amy’s speckled trout surged to the top of the leaderboard in the ongoing Cypremort Invitational Fishing Association tournament that ends Wednesday. Unless there are bigger fish caught between now and 7 p.m. Wednesday, Amy’s entry will win the Speckled Trout Division and Kevin Horton’s 35.20-pound redfish will win the Redfish Division.

“I’m hoping. If the wind keeps blowing like this … I’m hoping,” Amy said about the prospects of finishing first and winning $500.

Weather and water conditions, i.e. high salinity, were favorable the week Amy caught the 3.56-pounder. He reeled in a limit of speckled trout one weekend day before that fateful Friday.

“I caught a limit a few days before. I had a 2.56. I weighed that in and got fifth,” he said, noting he weighed the speckled trout at Dago’s Mobil & Grocery in Lydia.

“I wanted to go when there was less fishing pressure. I went a few days later and got the 3.56 — 1 pound bigger — and knocked my 5th off the board.”

The 33-year-old New Iberian, who works in building assemblies for VAM USA, said he went out in his 15-foot Express aluminum boat with a 25-h.p. Yamaha after he got off work that Friday. He was catching speckled trout consistently on a blue moon/chartreuse H&H Cocaho Minnow on a ¼-ounce leadhead before the biggest one bit.

He was fishing around the camp wharves in Vermilion Bay, he said. The first-place speckled trout hit his soft plastic around 5 or 5:30 p.m., he said.

Amy had CIFA’s first-place speckled trout four years in a row from 2015-18. The key to catching speckled trout, big or small, is to be in the right place at the right time of the tide movement, he said.

“This time of year the fish should be biting better than they are but you’ve got to catch the tide right, exactly how they like it, mainly whenever your tide’s just starting or just finishing is when you’re going to catch the majority of your fish,” he said. “I usually do better at the beginning or the end of the tide.”

Going into the last week of fishing, the Speckled Trout Division leaderboard looked like this:

The Redfish Division’s leader in the days leading up to the final weigh-in was caught by Kevin Horton. He weighed the 35.20-pounder on July 26.

Amy said he hasn’t targeted redfish once this year, mostly because his small jo-boat wouldn’t fare well with high winds whipping up the waves.