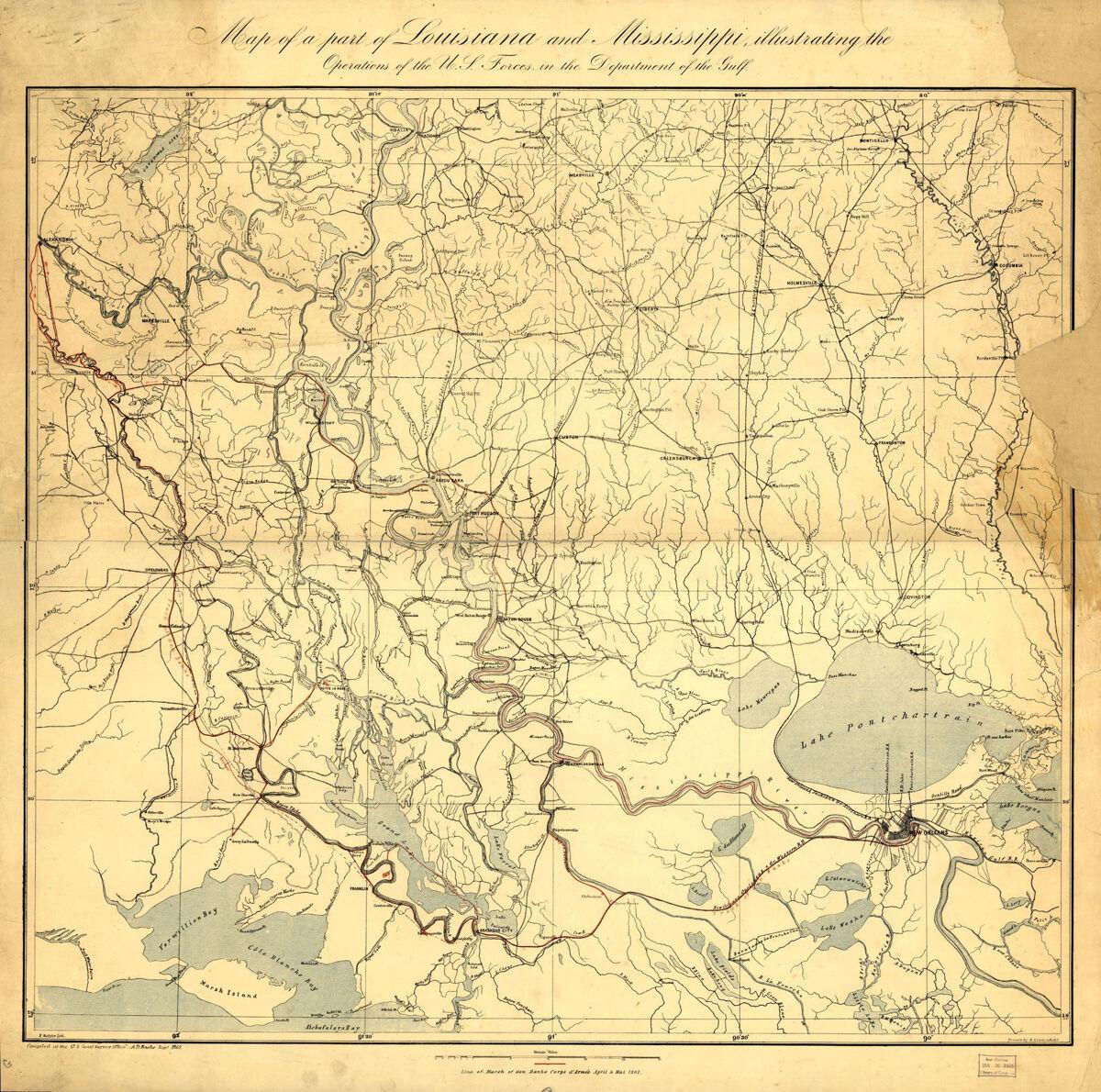 A United States Coast Survey map of a part of Louisiana and Mississippi, illustrating the operations of the U.S. forces, in the Department of the Gulf. Map by A. D. Bache, & H. Lindenkohl, 1863. The incomplete railroad is noted by a dashed line from Baldwin to New Iberia and on to Vermiloinville (Lafyaette).

A story in The Weekly Iberian on May 5, 1917, announces a caravan of boosters traveling to New Iberia promoting the Old Spanish Trail campaign.

A United States Coast Survey map of a part of Louisiana and Mississippi, illustrating the operations of the U.S. forces, in the Department of the Gulf. Map by A. D. Bache, & H. Lindenkohl, 1863. The incomplete railroad is noted by a dashed line from Baldwin to New Iberia and on to Vermiloinville (Lafyaette).

A story in The Weekly Iberian on May 5, 1917, announces a caravan of boosters traveling to New Iberia promoting the Old Spanish Trail campaign.

The “Old Spanish Trail” in New Iberia was not part of a colonial-era trail of conquest, or a trade route, but simply a commemorative name given to the highway in the early 1900s. Also known as Highway 182, which runs from Whiteville to Raceland, passing through Lafayette and Morgan City, from St. Landry Parish to Lafourche, La. 182 is the former U.S. 90. Louisiana began planning the conversion of 90 into a four-lane highway in 1955; the final extension from Morgan City to Raceland was completed in 1999.

The “Old Spanish Trail,” one of America’s oldest highways, was built to entertain travel and bicycle enthusiasts. The advertising stunt simply helped move the campaign along. This portion of the highway was renamed for promotional purposes, along with several other stretches of road from Jacksonville, Florida, to San Diego, California.

Shane Bernard’s Teche: A History of Louisiana's Most Famous Bayou examines the impact of colonialism on Louisiana’s natural water systems. He argues that railroads and automobiles eventually replaced the bayou as the major means of transportation in this region. He was able to answer a few of our questions about this major highway.

Q: You say that roads and railroads replaced the bayou as the chief means of transportation in the early 1900s.... During the Civil War, was the bayou more used in tandem with the road, or as the only main/only means of movement?

Bernard: You can see on old maps that there was indeed a trail around the time of the Civil War where the OST (Highway 182) now runs between New Iberia and Broussard, and indeed the BNSF railbed there now had already been laid by the war (by a different RR company), but the tracks were not installed until after the conflict. This trail ran by Camp Pratt, the Civil War site on Spanish Lake. Note the incomplete RR (dashed line) from Baldwin to New Iberia and toward Broussard/Lafayette here (whereas the tracks were already installed from New Orleans to Brashear City, now Morgan City, as shown by the solid line on the same map):

The Teche was a major thoroughfare for moving people, livestock, harvested crops, and various other goods and materials. There were trails along the bayou, here and there, but the steamboat really revolutionized transportation in this region (as elsewhere). The steamboat and the bayou were of top importance to commerce, travel, and communication from around 1830 (when the steamboat came into its own — not coincidentally around the same time sugar-farming along waterways became lucrative, and slave-owning became large-scale along the bayou) to around 1880, when the railroad finally reached the lower and middle Teche before veering off toward Vermilionville/Lafayette (following the same railbed). Rail very quickly began to siphon off business from steamboats and the bayou, and then with the coming of autos, trucks, and highways ca. 1910 the nail was in the coffin for steam/bayou travel. It limped along in terms of hauling people and crops and other goods until the US entry in WWII (1941), and, as wars often do, finally put an end to riverboats on the Teche.

During the Civil War there were Union and Confederate troop movements up and down this route, and even a skirmish where the road crosses Nelson Canal Road: people have found artillery shells at that spot, and other projectiles, and my son and I found "case shot balls" there a couple years ago while metal detecting. You can find engravings that show Civil War troops on that route, which is now Highway 182/Main Street/OST.