If you were to ask Darla and Steve Comeaux, they would say they are custom fit for each other.

The two have worked together for four years after marrying in 2017, but the couple has known each other for much more than that.

Finding each other again

After first meeting one another 25 years ago in church, the two went their separate ways and had their own families, but one day reconnected and have been together ever since.

Now the Comeauxs run Steven Comeaux’s Chimney Sweep, a cleaning service in all parts of Acadiana.

Throughout the years, Darla says, working with her husband has been an adventure each and every day, but she enjoys their work relationship, as they complement each other.

“It’s a custom fit,” she said. “A lot of things he didn’t like doing, I absolutely just loved, and when I tell you a lot of things he loved doing, I didn’t. So we took those halves and it’s been a great combination. It really has.”

Darla said she enjoys her side of the business, handling the accounting and management side of things. In the four years she’s worked there, she has noticed the business change for the better.

“We’ve begun to stabilize for growth, really,” she said. “We’ve literally doubled in size. We service over 100 cities.”

Her prior experiences at running various sides of the business have worked out seamlessly.

“Walking into this (business) was really a culmination of all my training,” she said. “Coming in at what he’s (Steven) already had been previously successful at doing, we just really tweaked a lot of things we could increase.”

The company works with corporate accounts, vendors, apartment complexes and different agencies, like real estate, moving companies, and others all around Acadiana.

According to Darla Comeaux, the couple works together to educate homeowners and business owners alike about the dangers of an improperly-kept chimney. 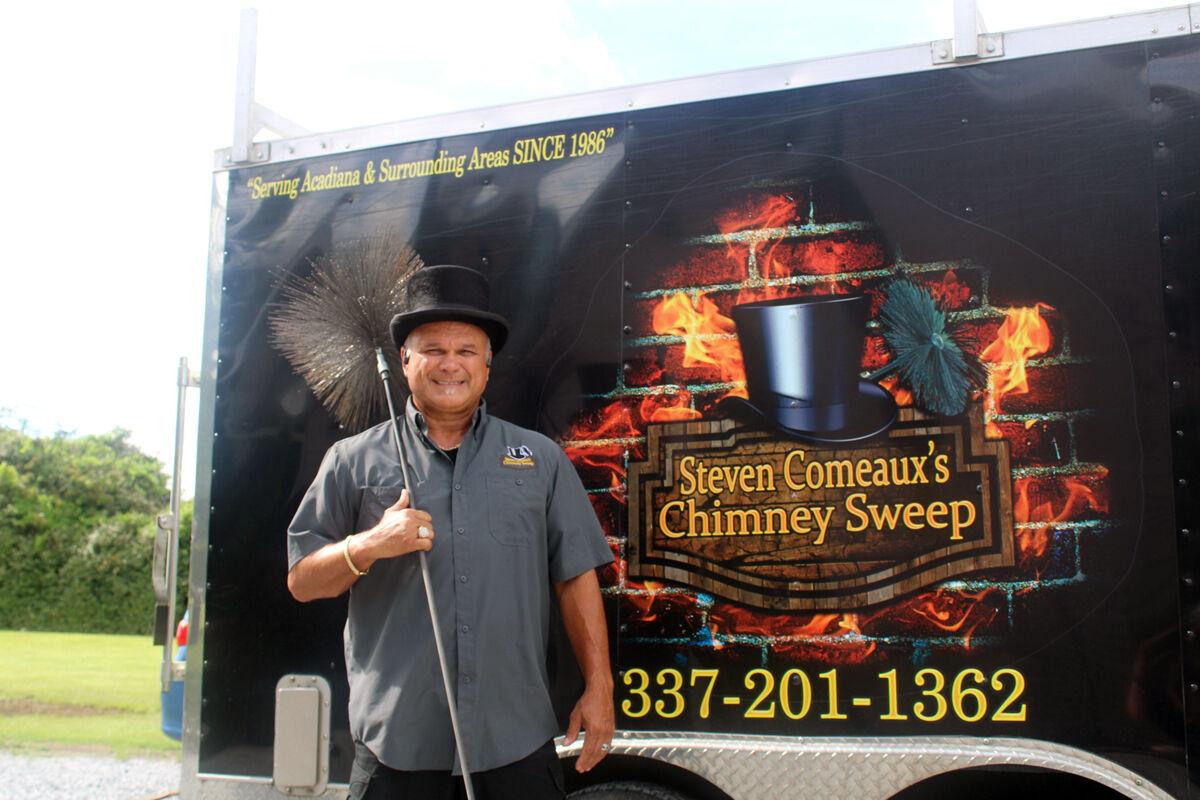 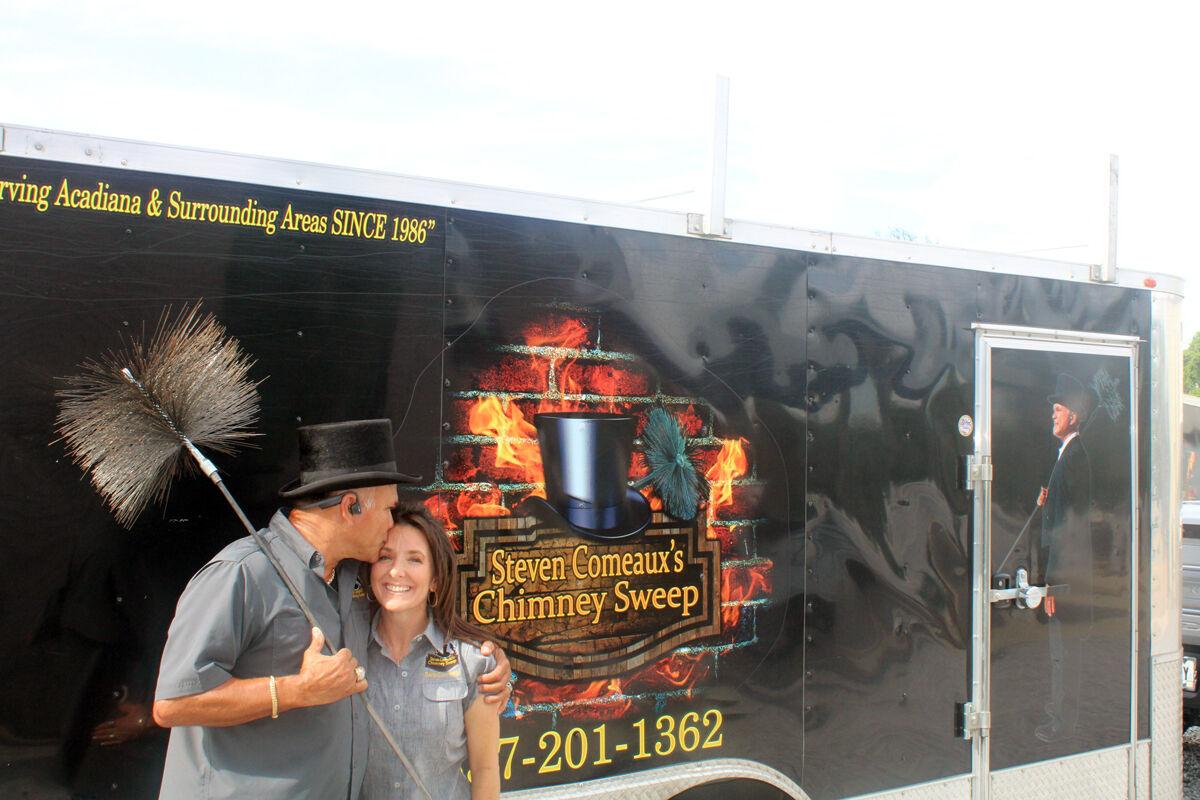 Steven Comeaux, left, hugs and kisses his wife of four years, Darla. The couples loves working together because they work so well with each other. Darla handles the business side and Steven does the labor. Since the two began working with each other four years ago, they have been able to growth Steven Comeaux’s Chimney Sweep. 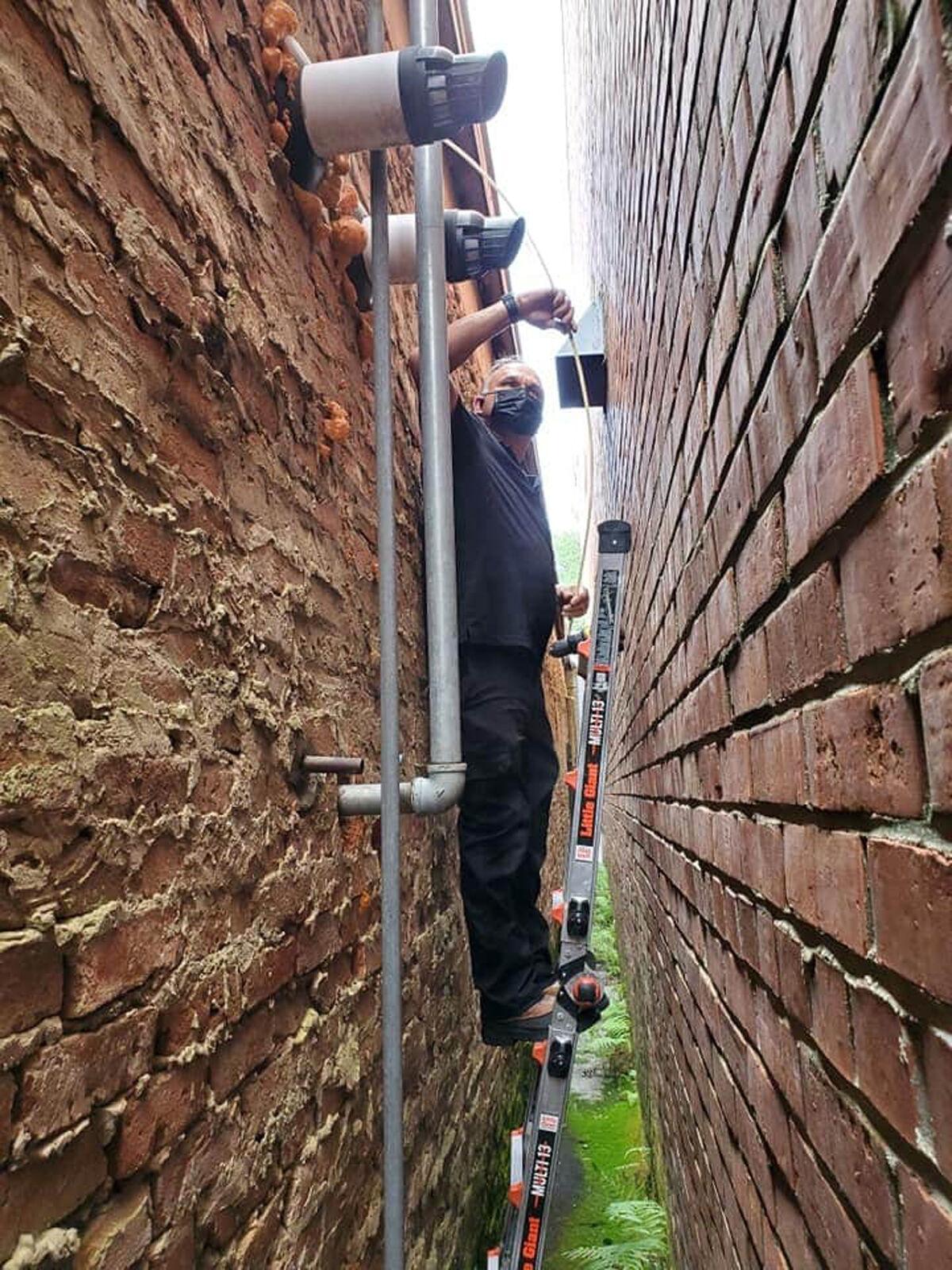 Steven Comeaux working on a home. For 35 years, Comeaux has run his own business, Steven Comeaux’s Chimney Sweep.

Steven Comeaux, left, hugs and kisses his wife of four years, Darla. The couples loves working together because they work so well with each other. Darla handles the business side and Steven does the labor. Since the two began working with each other four years ago, they have been able to growth Steven Comeaux’s Chimney Sweep.

Steven Comeaux working on a home. For 35 years, Comeaux has run his own business, Steven Comeaux’s Chimney Sweep.

“Because most of the time, people don’t know,” Darla Comeaux said. “Whenever you burn wood, it leaves behind to build up in the interior (of the chimney), and most people don’t ever see that. It’s an unseen thing behind the scenes and that build-up can be very dangerous.”

Darla Comeaux said the massive growth for the business can be attributed to the people that Steven has worked with and the solid foundation the business has developed over the years.

A new career in life

In 1985, Steven was living in California working for an oilfield company and was told about the chimney sweeping business. Months later, Steven had the idea of starting his own business.

A year later, he and his partner at the time opened up their chimney sweeping company, and when his partner wanted out, Comeaux took a leap of faith and took on the business by himself.

In the course of their chimney-sweeping career, the Comeauxs have seen it all and done it all.

From finding live snakes, raccoons, birds and ducks and dead animals of all kinds, there isn’t a job they aren’t willing to do for the customers.

Through the dirt and dead animals, Comeaux never thought he would be in this line of work.

“Absolutely not,” he joked. “I was living in Ventura, California, and I remember looking in my home chimney and not realizing a year later, I would be doing it for the next 35 years.”

Over the last 35 years, Steven said he didn’t have to hustle, going door-to-door to get work. The work came to him.

Comeaux said he feels blessed in that every year, the two pick up new business from new customers.

“It just has been the perfect set up,” he said. “Because of the weather in Louisiana, I’ve never had a decrease (in work) in 35 years.”

Going strong for all these years, Steven Comeuax’s passion for his work and his business is in large part to the money they make and the people they have met on their adventures in Acadiana.