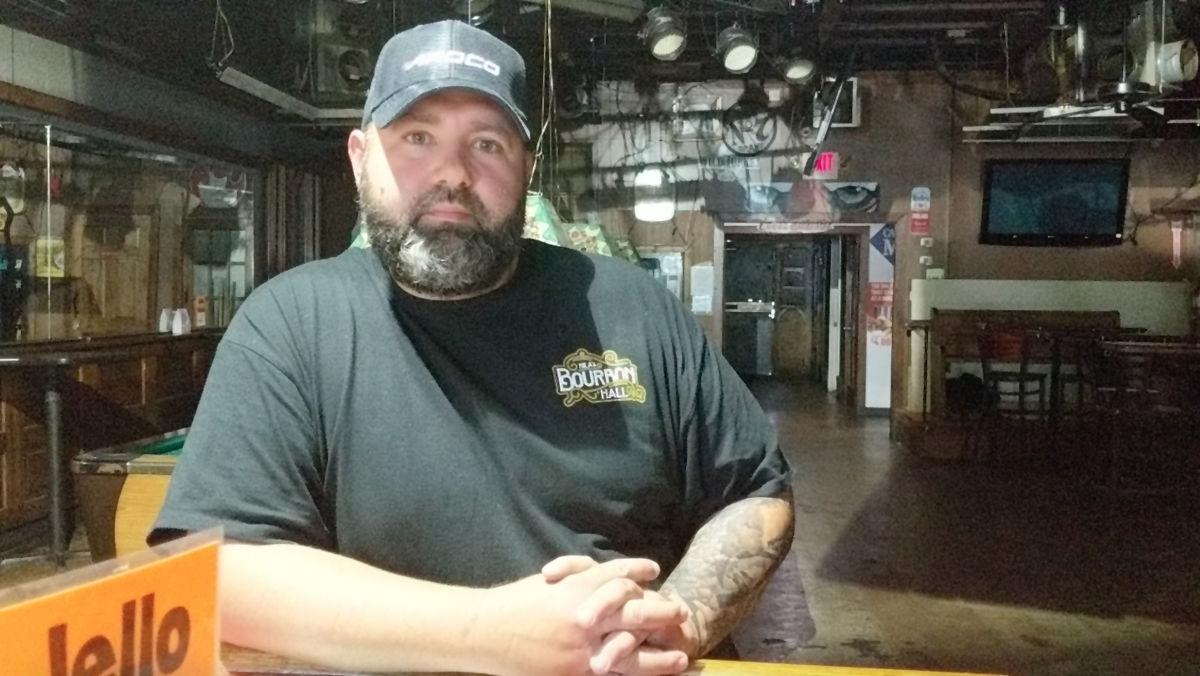 Caroll Trahan sits at the bar at the Bourbon Hall. He and his fiancée bought the business in December and closed on the building in early March, taking on debt just as the COVID-19 stay-at-home order shut the nightspot down. 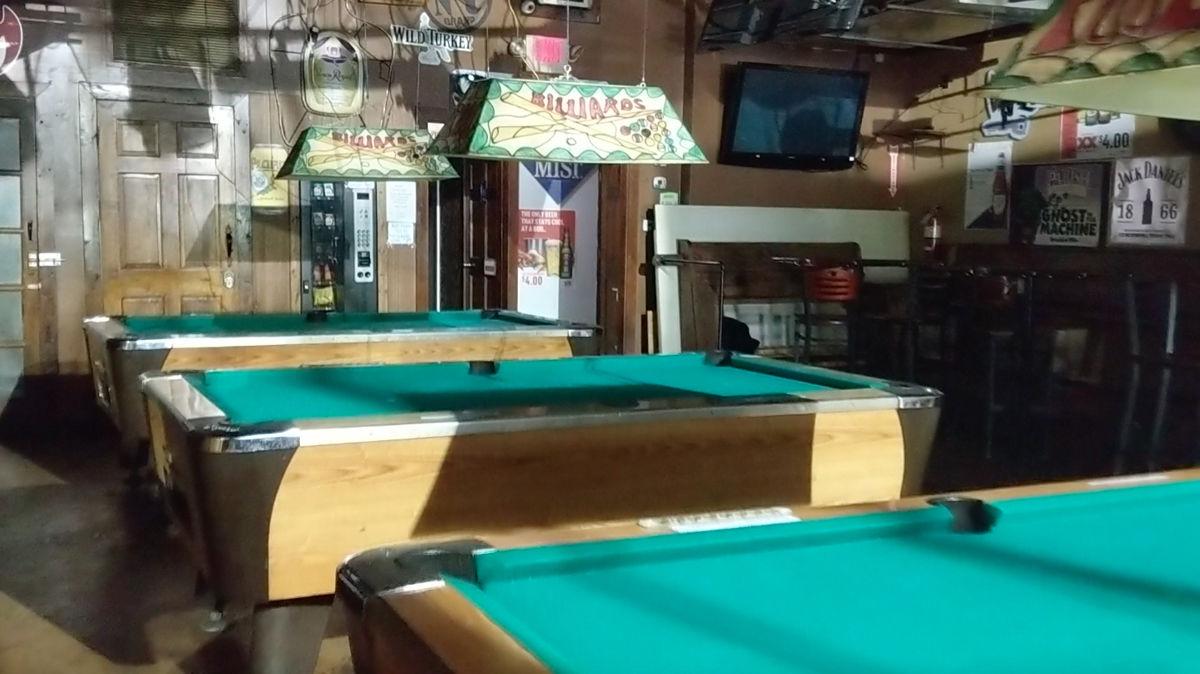 Bourbon Hall owner Caroll Trahan said he had been making improvements at the bar, including having all of the pool tables re-felted, just before the business had to close under Gov. John Bel Edwards’ stay-at-home order. 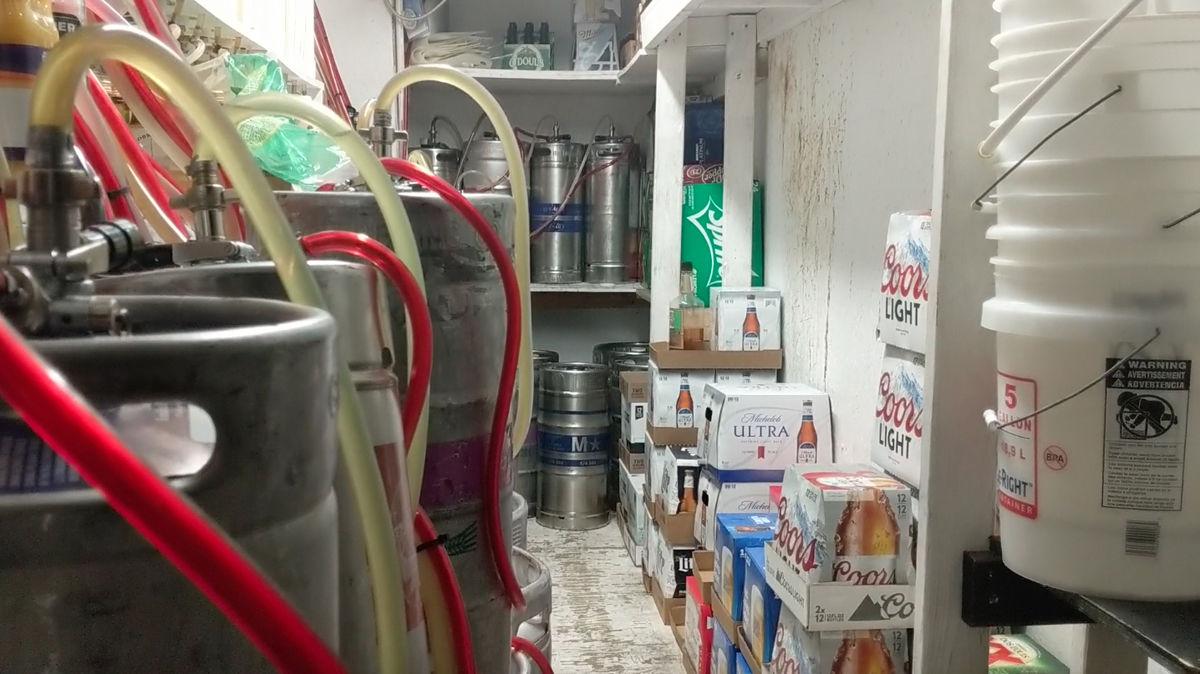 Beer distributors would not take back product already delivered, even untapped kegs or sealed cans, after the state’s stay-at-home order started, meaning bars had to maintain their refrigeration — and burn electricity — while they could not do business.

Caroll Trahan sits at the bar at the Bourbon Hall. He and his fiancée bought the business in December and closed on the building in early March, taking on debt just as the COVID-19 stay-at-home order shut the nightspot down.

Bourbon Hall owner Caroll Trahan said he had been making improvements at the bar, including having all of the pool tables re-felted, just before the business had to close under Gov. John Bel Edwards’ stay-at-home order.

Beer distributors would not take back product already delivered, even untapped kegs or sealed cans, after the state’s stay-at-home order started, meaning bars had to maintain their refrigeration — and burn electricity — while they could not do business.

Caroll Trahan said that when he wanted to go into business, he always wanted to own something established.

“I didn’t want a start-up,” he said Tuesday, sitting at the end of the wood-and-Formica bar at the Bourbon Hall on Main Street. “I wanted something with some history.”

He and his fiancée, Danita Maldonado, had a chance to do that late last year when Dave Munnerlyn got out of the bar business, selling off both the Bourbon Hall, right in the midst of downtown New Iberia, and the E and E Cigar Bar farther down Main Street.

“We bought the bar in December, and closed the deal on the building in March,” Trahan said.

Like any new owner, he wanted to improve on his business. He added some lighting and signage inside. All three of the bar’s pool tables were leveled and recovered, the pale green felt still pristine months later.

“Our first four months, we had the best four months ever,” Trahan said. “We did better than the previous owner did.”

Then came the COVID-19 shutdown.

It was in mid-March when Gov. John Bel Edwards put a stay-at-home order in place, one that targeted places where people congregated in close contact with each other, like gyms, movie theaters, restaurants, and personal service businesses like hair salons and tattoo parlors.

Oh, and bars. Specifically bars that did not serve food.

Now, the interior of Bourbon Hall is dimly lit, sunshine fighting its way through the front windows, dodging flyers and signs on the closed door to reach the recently wiped bar. The sad smell of a nightspot during the day — that mixture of stale beer, fading perfume and the distinct tang of heavy refrigeration equipment fighting against the afternoon heat — lingers as the glare heats up the front portion of the bar.

Like the flat black paint job on a stealth fighter, a bar is not made for daylight.

They also aren’t made for times of pandemic-induced closings.

The timing of the COVID-19 outbreak could not have been worse for Trahan and Maldonado. Not only are they now the sole owners of a building and business that require bills and notes to be paid every month, they have employees who depended on the bar for their livelihood.

If that were not bad enough, they were also new owners, meaning they did not qualify for most of the assistance offered to other businesses.

“We would have to have been here for a year,” Trahan said.

So no Payroll Protection Act money. No CARES Act safety net. And on top of that, the distributors who supplied the bar with its beer would not take back any of the inventory.

“They tried to work with us, but they would not take back any of the kegs, whether they were tapped or not,” Trahan said. “They wouldn’t even take back the cans.”

That meant that, unlike other businesses that could throw the breakers, shut off the air conditioning and lights and walk away until things improved, Bourbon Hall would have to keep its climate control and refrigeration fired up, burning through cash that the bar was not earning.

The reopening of bars under the state’s Phase Two declaration came just in time for the couple to start catching up.

“In the five weeks, we caught up with our bills from the shutdown,” Trahan said. “But that was it.”

Now, in the midst of a second shutdown with no fixed end in sight, the options for the owners are limited. The option of a “curb service” establishment won’t work, Trahan said, because the location is not permitted for that use. And even the idea of sidewalk service — using a few tables out front for service, which the bar is officially licensed to do, would not fly.

“We asked the city if the sidewalk was ‘on premises,’” Trahan said. “They said no, we couldn’t do that.”

One option that Maldonado mentioned was still available to the owners is a Main Street grant that the business would be qualified for because it did not receive other forms of federal or state aid.

“That is something, but it isn’t enough,” she said.

Trahan, though, said he wasn’t worried about him and Maldonado. His real worry, the one that pulls at his heart, is the concern for the employees.

“We can hang on for two or three weeks,” Trahan said. “I’ve tried not to think about if it goes longer than that. I really do worry about the people who work here. We did all the right things. All the bartenders wore their masks. We moved the pool tables to take out the dance floor, to improve social distance. We set up a little stage out front and brought in local artists to play.”

Maldonado said the state inspectors had just issued a clean bill of health to the bar last week.

“They just cleared us and got us into the OpenSafely system,” she said. “Then they shut us down. They got us into the system just in time to send us the email Saturday.”

Even the old adage that every bar is always for sale if the price is right doesn’t really apply in the midst of a pandemic. Unlike most times in the bar’s history, Trahan said finding a buyer for the business in the time of COVID-19 is pretty much a dead end.

Bourbon Hall owner speaks about bar ownership during the coronavirus

Caroll Trahan, who, along with his fiancée Danita Maldonado, purchased downtown New Iberia's Bourbon Hall bar in December, talks about the cha…

Louisiana COVID-19 growth not showing any signs of slowing

The state Department of Health update Wednesday showed the state adding more than 2,000 identified infections to its COVID-19 total.