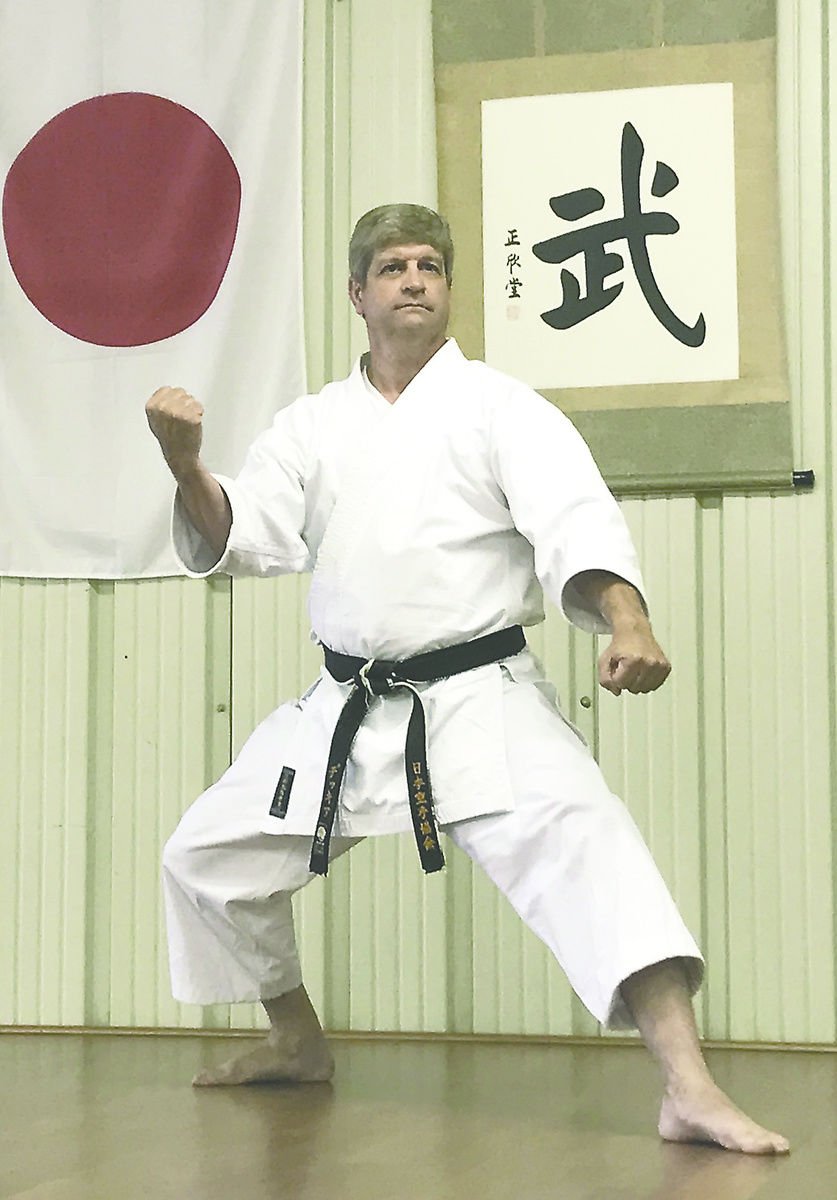 Scott Decuir of New Iberia, a local karate instructor, has risen to the rank of sixth-degree black belt. 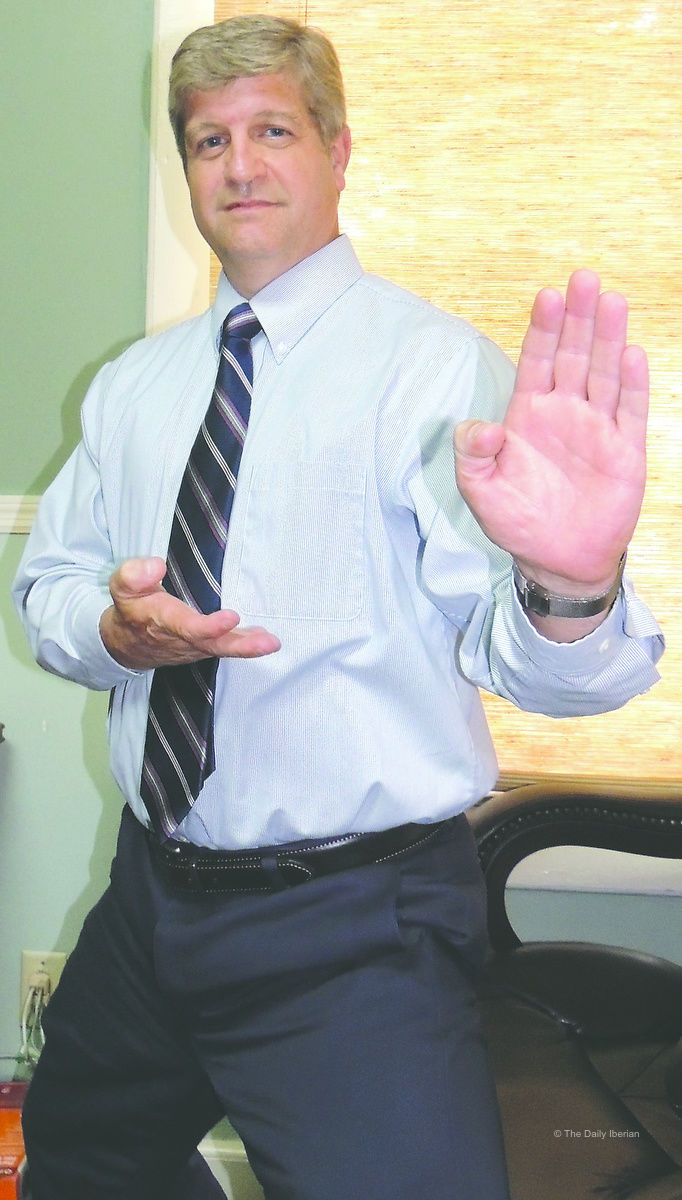 A student says Scott Decuir, above, puts many hours into his karate instruction.

Scott Decuir of New Iberia, a local karate instructor, has risen to the rank of sixth-degree black belt.

A student says Scott Decuir, above, puts many hours into his karate instruction.

The heart of The Teche Area has a RokuDan!

Scott Decuir, chief instructor of the New iberia Karate Institute, the city’s oldest karate school, is now a RokuDan, a sixth-degree black belt (Roku is the Japanese word for six).

Decuir, 56, now officially known as Sunsei (Japanese for teacher) RokuDan Scott Decuir, graduated to Karate’s sixth step after successfully after completing all of the requirements earlier this month, at a testing ceremony in New Orleans.  He is only the third Louisiana native to achieve the rank, and one of only two RokuDans who live outside of New Orleans.

And he said it all started 44 years ago, after becoming a serious Sean Connery fan.

“I guess you could say I caught my envie for karate, when I was 12 years old, watching all those James Bond movies,” he said.

“Seeing Sean Connery, the villains like Dr No, fighting, doing karate techniques, I thought it was all very mysterious.”

Decuir has been training karate for 44 years, and he has taught karate for 18 years.

“I love karate for many reasons. It’s something good to get you in shape. Karate develops flexibility. In fact, many of our stretching exercises are the same as in yoga.”

“Karate is the most effective method of self-defense ever devised by man. It is moving meditation and a heck of a lot cheaper than a psychoanalyst.”

Decuir claims New Iberia as his home, but he was actually born in Baton Rouge, while his mom and dad were attending LSU.

He is the son of retired Louisiana Court of Appeal Third Circuit Judge Oswald Decuir, who was also a state senator here, and Loretta Young, a former educator in Catholic schools. Both reside in New Iberia.

“My mom was from Port Allen, my dad from New Iberia, and they met at LSU. I even lived in the married dorms with them.”

Eventually, the Decuirs moved back to New Iberia, and that’s when Scott enrolled in first grade, at Dodson Elementary School. He later attended New Iberia Junior High, which he said is now the site of the SchoolDays Elderly Apartments, and then graduated from NISH.

His wife Loren said she is not surprised her husband has advanced to a Roku Dan, because of his work ethic.

“Karate is more than symbolism for Scott. I think he enjoys the mental and physical challenge of karate. It takes a lot of focus, self-discipline and practice to master.” Loren is a teacher at North Lewis Elementary School.

Decuir’s son, Dr. Jon Scott Decuir of New Orleans, said he is very proud of his dad’s advancement and rank, in this art form.

“I trained with my dad, and that taught me many things, about how a positive attitude can impact self discipline.”

“Working with him in this art, has taught me how to be more confident, and make decisions quickly,” the 28-year-old resident said.

Scott said his son was president of the LSU Karate Team when he was there and took third in nation in collegiate karate in his junior year.

His daughter, Laura Decuir, said although she watched her dad perform karate all her life, her interests were in dance and vocals.

“But he supported me the whole way, and that meant so much. That’s the kind of man he is, always helping someone with their passions.”

“As proud as I am of him, and as far as he has stretched himself, I’m afraid I’m still a white belt, although I dabble every now and then,” the 24-year-old said, who works in corporate and foundational grants for Tulane University.

However, there are 10 levels of black belt in karate. The first five are Shodan, Nidan, Sandan, Yodan and Godan. Rokudan is the sixth, followed by Nanadan, Hachidan and Kyuudan. Judan is the final level.

“At my age, I realized i needed to make plans to graduate to RokuDan. Frankly, you have to go to Japan to achieve the seventh step, and it’s very expensive,” he said.

“And if that wasn’t enough, I had to take an oral exam, (called a Bunkai), and they called the whole thing in Japanese. Luckily, I knew the language well enough. I can’t hold a conversation however,” Decuir said.

Steve Bellingham and his sons, have been students of Decuir’s for 12 years, first with Steve in 2005.

“His knowledge of the art and his dedication to his students make him stand out,” the Sandan (third degree black belt) said.

Bellingham, who is an engineer by trade, said Decuir puts many hours of time and effort into what he does.

“He has become a great teacher, mentor and friend,” Bellingham said.

“His achievement of the sixth step in karate will add more validity to a school that teaches so much,” Bellingham said.

The New Iberia Karate Institute is located at 224 Center St.

Decuir, a local lawyer, said he teaches five days a week and the cost is $65 a month. Private lessons are available.

“If you want to get into karate, you have to look at it, in its entirety. You can’t look at it, as just a sport,” the proud RokuDan said.

If you know someone who would make an interesting weekend profile, please submit his or her name for consideration. Call 321-6766 or send an email to news@daily-iberian.com, subject line Weekend Profile.