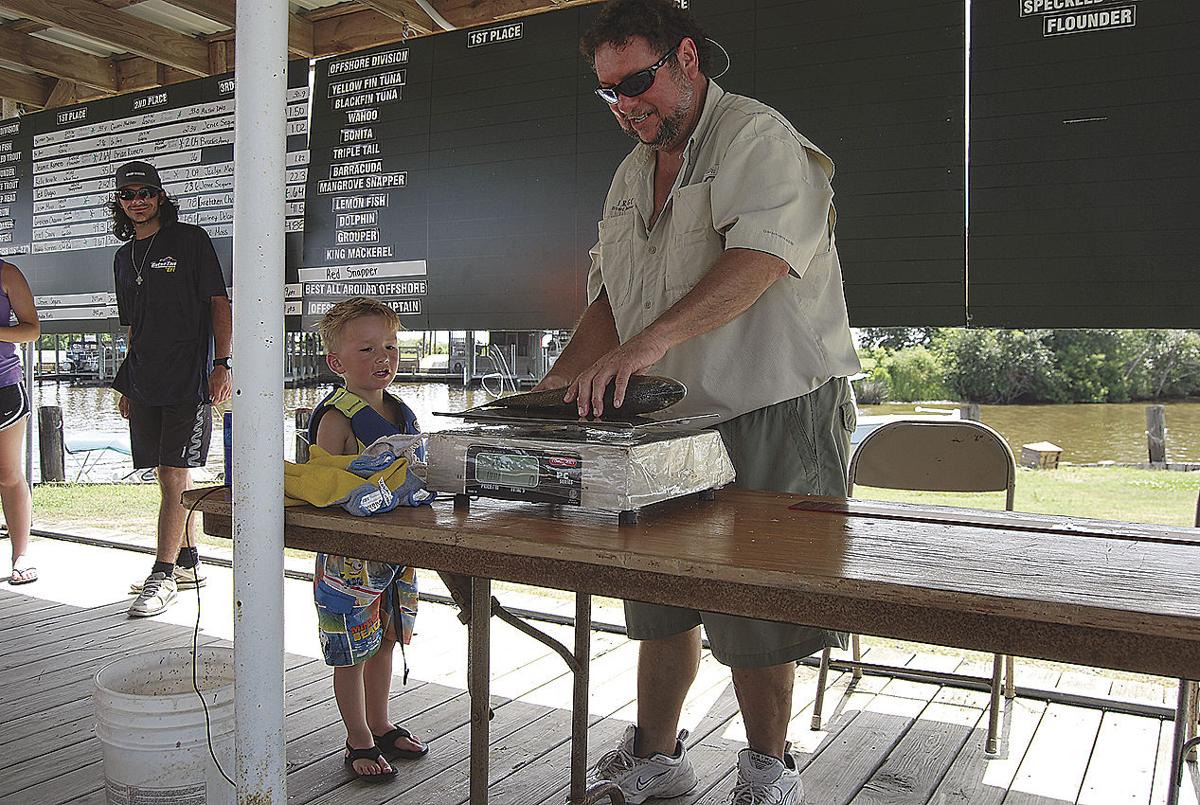 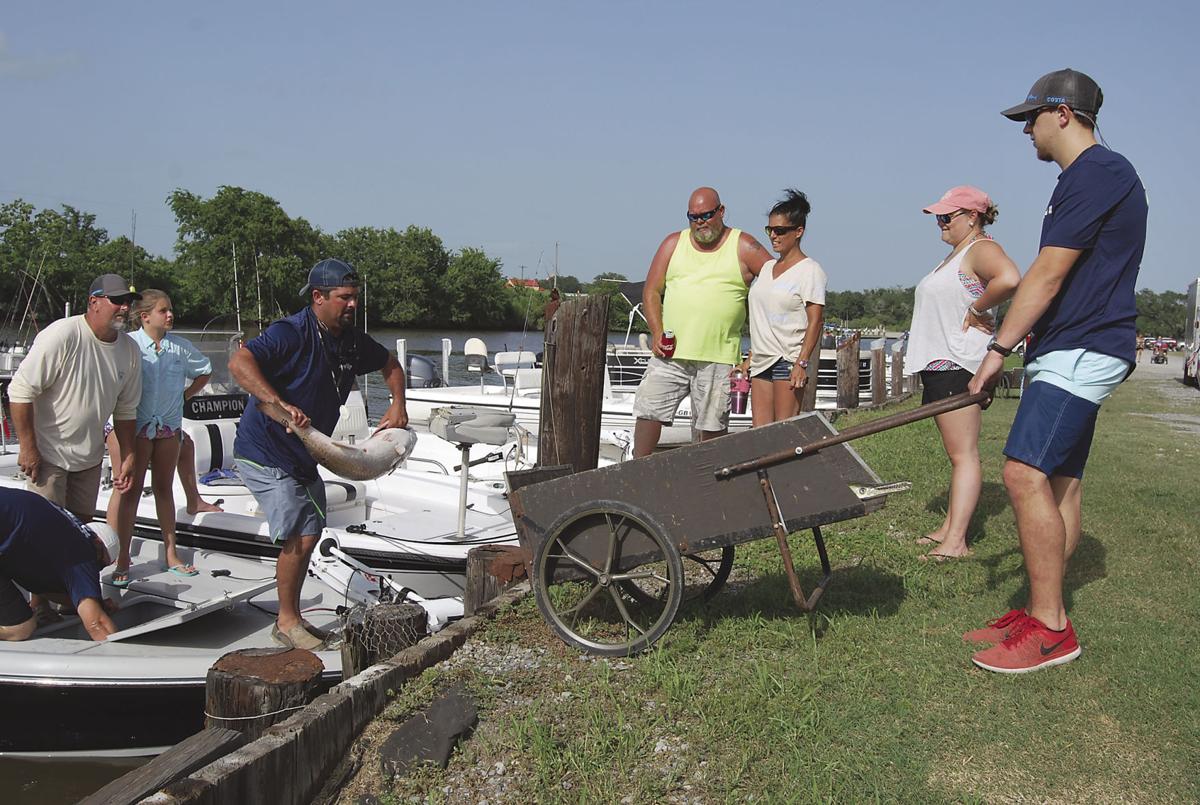 An angler carries his prized catch off of his boat at Cypremort Point.

An angler carries his prized catch off of his boat at Cypremort Point.

There’s a reason so many saltwater fishermen have boats, or know someone with a boat, here in the heart of Acadiana.

There’s a reason each of those boats have at least one ice chest on board to deposit speckled trout, redfish, flounder, croaker, drum, sheepshead and white trout.

There’s a reason a pavilion big enough to shade dozens of people involved in saltwater fishing contests – organizers, anglers and visitors -- was built several years ago at Cypremort Point along Quintana Canal near Vermilion Bay.

Saltwater fishing success is high once water conditions – salinity and turbidity -- get right. Usually, starting in June or July, once the Atchafalaya River settles below 10.0-feet at Butte La Rose, it gets better and better as the water clears and the salinity climbs in inside waters.

As it gets better and better, there’s few if any places along the Louisiana coast that can rival the saltwater fishing around Cypremort Point.

No one knows that better than an accomplished saltwater fisherman from New Iberia, a retired state Department of Wildlife and Fisheries Enforcement Division agent who patrolled the bountiful waters for 31 years before retiring as a sergeant in 2014.

Keith Delahoussaye of New Iberia, 63, is a member of the Southcentral Fishing Association, a redfish fishing club that fishes four regular-season tournaments and the SFA Classic out of Quintana Canal Boating Landing, a public boat launch and one of several access points to Vermilion Bay. Most Teche Area outdoorsman launch use the large boat launch with spacious parking located near the end of Lousiana 319, 18.5 miles southwest of U.S. 90 East.

Other area anglers who prefer a longer boat ride compared to towing their boat to Cypremort Point often dock at Bayou Patout Boat Landing on Louisiana 83 just outside Lydia heading to Cypremort Point. Prime fishing areas are 15 to 20 minutes away, based on the speed of the boat.

To a man, woman and child, they are there for one thing -- to see that popping cork above a soft plastic or shrimp sink under the weight of a fish, or watch the fishing line start cutting through the water as a fish inhales a Carolina-rigged cracked crab, cut mullet or shrimp. Generations of saltwater fishermen have enjoyed the potentially great fishing and pass on the tips and hotspots.

Many of them get together each year for the biggest and most competitive saltwater fishing contest at Cypremort Point, the Iberia Rod & Gun Club’s Saltwater Fishing Rodeo. Competition in the Junior Division and the Inside Division has mushroomed over the past few years and the Offshore Division is coming back strong for the Fourth of July contest

Delahoussaye credits an infusion of young blood into the IR&GC board for the turnaround.

“There are a bunch of younger guys, good guys involved in that. I think it will take off bigger than ever,” he said.

The 64th running of the annual event was an unqualified success the first weekend of July 2017. The leaderboards were filled, particularly in the speckled trout category in the Junior Division and Inside Division.

Without a doubt, speckled trout fishing success can reach epic proportions, a veritable bonanza, starting in the near-offshore waters at places like Nickel Reef, Tiger Shoals and South Marsh Island 233, then, as inside waters get saltier and saltier, closer and closer to Marsh Island, including to the west at Tee Butte, then inside Southwest Pass and, eventually, Vermilion Bay.

“The south side of Marsh Island in the reefs when the water gets good, that’s some of the best fishing around. It’s hard to beat” for putting speckled trout, redfish and other species in the boat, he said about popular reefs such as Diamond Reef, Shell Keys and Pavy’s Reef near Southwest Pass.

“On the south side of the island (Marsh Island), when the water gets good, that’s some of the best fishing around, hard to beat,” Delahoussaye said.

In a typical year, weather and water conditions permitting, speckled trout can be hooked and boated in quantity and quality in inside waters from July through December.

“Oh, yeah, this is real good, one of the best. You can catch big speckled trout here,” Delahoussaye said, noting some of the heaviest speckled trout along the coast are caught in and around Vermilion Bay. CCA-Louisiana S.T.A.R. results prove that each year with 6- to 9-pounders hitting the scales.

“We hold our own right here in the center of the state (coast). Shoot, when The Cove is clicking, it will put out bigger speckled trout than any area around here,” he said.

Ah, The Cove. Launch at Quintana Canal Boat Landing and you can be into the speckled trout thick in less than 5 minutes as it begins at the mouth of Quintana Canal. To the west is the beach fronting Cypremort Point State Park and farther west are perennial hotspots like Blue Point, Weeks Bay, Mud Point, Trash Pile, Tee Butte, etc. Three miles south of the tip of Cypremort Point is Dry Reef, site of a sprawling oil rig structure with wellheads to the west.

The Cove can’t be beat at times, especially in September, October and November. However, the past two falls and early winters, speckled trout fishing success was sporadic there and most of the other inside hotspots, which was disappointing to many people, including those fishing the months-long Cypremort Invitational Fishing Tournament.

“Glow was the hot color last year. Glow was hot in the Cove,” he said.

While he’s adept at putting beau coup speckled trout in the boat, his specialty is catching redfish. He was on the winning boat last summer for the SFA Classic.

“You can just about always find clear enough water to fish for redfish,” he said in early March, noting he was catching redfish consistently in late February.

Many of the redfish were being caught inside Marsh Island, which has numerous shallow ponds and lakes and bayous that harbor redfish. Delahoussaye knows the waters like the back of his hand.

Unfortunately, due to the rapid rise of the Atchafalaya River in February, much of the successful redfish fishing at the time was confined to Marsh Island because most areas along the eastern side of Vermilion Bay freshened up and muddied up, thus discouraging the targeting of redfish in much of Vermilion Bay. Also contributing to the worsening water conditions was the Calumet Cut, also known as the Wax Lake Outlet, which empties into East Cote Blanche Bay.

“It had been good. A couple weeks ago, we were catching everywhere. Water was good in the Bay. Fishing was good on the bayshore (of Marsh Island). Now we’re picking up some in the island. You’ve got to find decent water and that’s hard to find right now,” Delahoussaye said.

“Over here we’re limited to the clarity of the Bay. That’s put a lot of people inside Marsh Island. They’re all keeping redfish 16 inches to 27 inches inside the island. With that many people inside (Marsh Island) because they can’t spread out, I think it (redfish fishing success) backs off.”

Delahoussaye, who fished the SFA opener March 17 with Delcambre anglers Quentin Comeaux and Ryan Landry, said he goes after redfish most of the time on shrimp.

“I use shrimp under a cork is mostly what I do,” he said.

Delahoussaye’s other favorite areas to target redfish include the aptly named Redfish Point and Hell Hole.

“It seems to me they have less pressure there along that bank (Hell Hole area),” he said about the area just west of Hog Bayou and just north of Portage Lake.

One of the big attractions for summer and most of the fall are bull reds, the 20-plus pound redfish. The Vermilion Bay hotspot for bull reds is Boxcar Reef on the western side of Vermilion Bay.

Caroline-rigged cracked crab, cut mullet and other natural baits entice those big redfish to bite and much of the action is enjoyed at night, which is a relief during the dog days of summer.