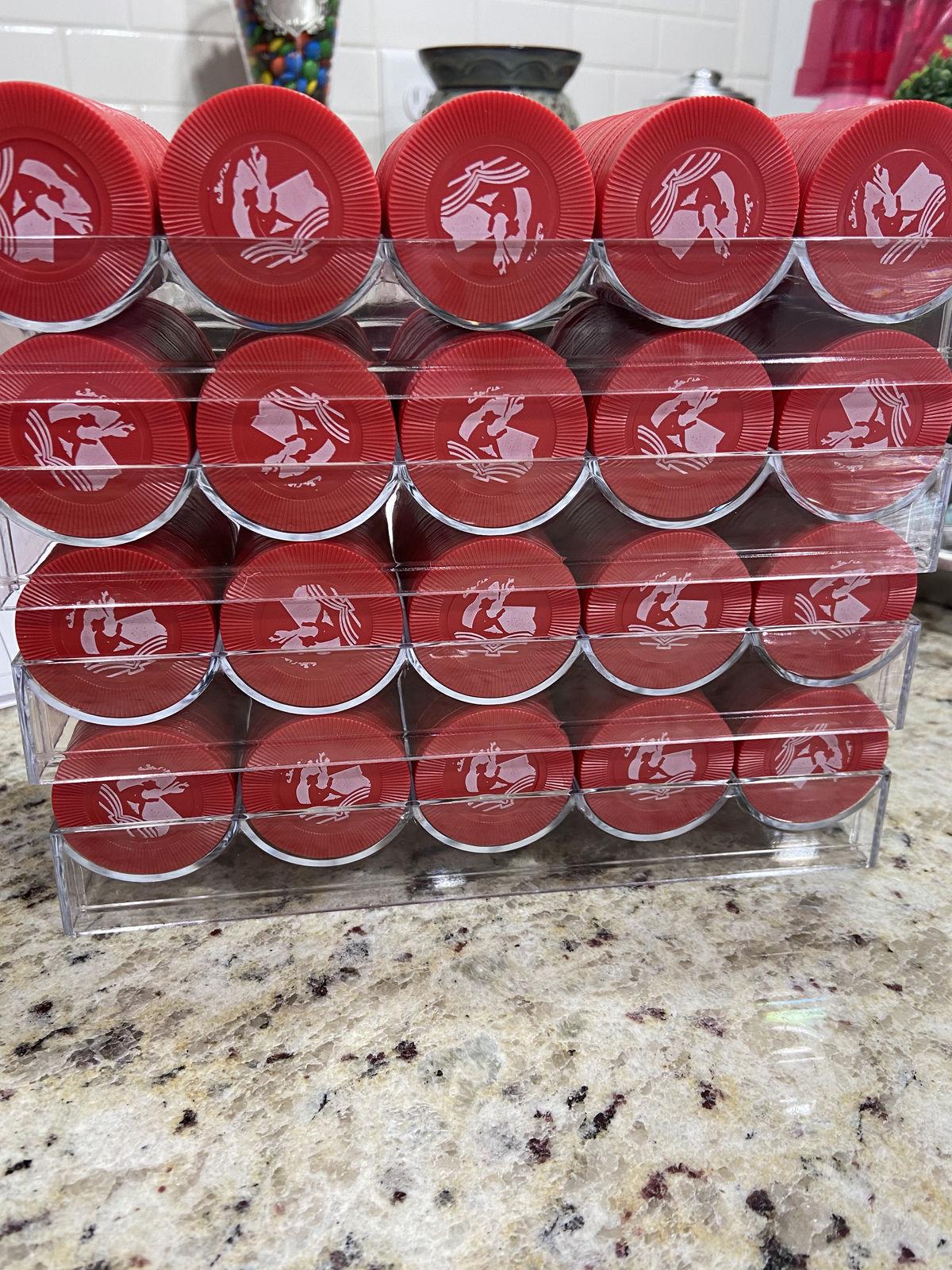 A stack of new ‘unique’ chips for use with the Bourré tournament scheduled as part of the Books Along the Teche Literary Festival arrived just before the federal social distancing guidelines put an end to gatherings of more than 10 people in one place. 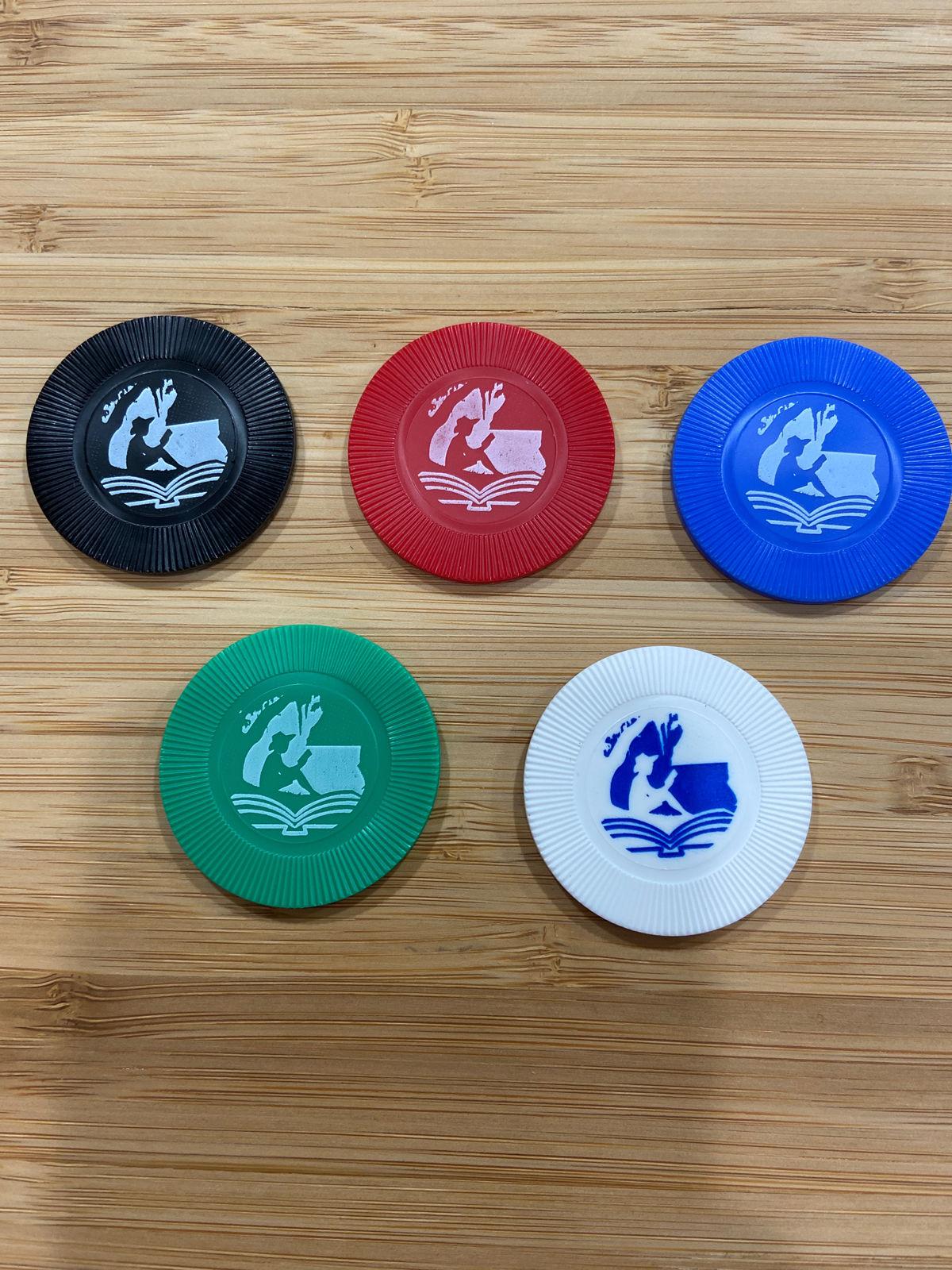 New chips imprinted with the unique logo for the Bourré tournament scheduled to be held in conjunction with the Books Along the Teche Literary Festival were purchased before the tournament was canceled, along with the festival, in the wake of the coronavirus pandemic. The chips were purchased to replace borrowed or rented chips that had to have stickers with the emblem placed on each chip, then removed before being returned.

A stack of new ‘unique’ chips for use with the Bourré tournament scheduled as part of the Books Along the Teche Literary Festival arrived just before the federal social distancing guidelines put an end to gatherings of more than 10 people in one place.

New chips imprinted with the unique logo for the Bourré tournament scheduled to be held in conjunction with the Books Along the Teche Literary Festival were purchased before the tournament was canceled, along with the festival, in the wake of the coronavirus pandemic. The chips were purchased to replace borrowed or rented chips that had to have stickers with the emblem placed on each chip, then removed before being returned.

But tournament organizer Jerri Carlson LeClair said she hopes to see the tournament put on sometime later this year when the federal and state government give the okay to allow more than 10 people to gather for events. The tournament serves as a fundraiser for the Iberia Cultural Resources Association, which puts on the festival and such community activities as four free symphony performances annually in the city.

“It’s one of the few things we can have independently,” she said. “The rest of the activities are pretty much festival activities. The Bourré tournament’s one of the most interesting and fun, but it really can be a stand-alone.”

People enjoy the tournament, she said, and most of the work has already been done in preparation for it.

“That’s why I think that it wouldn’t be anything (difficult) for us — it’s not like getting artists in from out of town, and all the other things that go with (the festival like) tour companies, the boats, the buses. It’s none of that, so we can very easily have an event,” she said. “And honestly, Pelican’s does this sort of thing all the time. They have an Easter thing for the kids, they have these community events, so this is really just nothing for them to be able to do it. Everyone’s always up for a good time.”

LeClair said though she doesn’t play the game, she enjoys watching the competition.

“There’s plenty of people who love to play, and it’s so fun,” she said. “I just can’t tell you how much fun these people have. It is a blast.”

Even without the festival connection, LeClair said it shouldn’t be a problem getting the tournament going again. She said organizers want to be careful to give at least a couple of weeks time between the government allowing groups to gather again and the time a tournament would be put on, as an extra measure of safety.

When it became clear that the tournament would have to be canceled, LeClair said she called all the prize donors and offered to return the prizes. All of the companies who donated prizes told her to keep them for when the tournament can be held, however.

“All the prizes are in house,” she said. “We’ve got a bunch of great prizes.”

And players don’t have to win to collect prizes. Each participant receives a ticket at the start of the tournament, and as the number of tables is whittled down, at each break prize tickets are drawn. There’s also a special prize for the first person to be eliminated (this year a bottle of Fireball Cinnamon Whisky donated by the Quarter Tavern).

“We’ve been so successful, and we just kind of hung onto our profits from last year, it didn’t really take a lot to do this,” she said. “We knew when we had enough money we were going to do this.”

The tournament fills up quickly, she said, with slots for 80 players of the trick-taking game, similar to spades, that is popular in Acadiana. The state Gaming Commission must provide a charity gaming license for the tournament, with the organizers filing for a specific date and time range, from 2-5 p.m. in the case of this tournament. The state also requires the tournament to provide “unique” chips for the event.

In the past, that meant using poker chips either purchased, rented or borrowed with printed stickers pasted on each chip, then removed after the tournament. With some 8,000 chips, that proved time consuming and was not cheap, either. Though Carlson printed the stickers herself since they didn’t have to be high-quality, it still involved the cost of several ink cartridges and the paper itself. The group used fast-release stickers and several people would get together to place and later remove the stickers from chips.

This year the group found it easier to order their own chips imprinted with the Books Along the Teche Literary Festival logo, which arrived just in time — for the tournament’s cancellation.

Nevertheless, LeClair said she was excited to receive the chips, which she was in the process of sorting for whenever the tournament can be put on.

“All in all this is really economical in the long run,” she said. “It fulfilled our gaming commission requirement that we have a special chip. I’m happy we have ’em.”

About a two- or three-week window will be necessary to get things in order and put the tournament together, she said.

“The only thing that’s holding us back is Pelican’s (not being able to seat customers) and the government,” she said. “Just as soon as we can find a good weekend, two or three weeks in advance that we can sell our tickets and file our session schedule, we would be good to go.”

Entry fees were returned to the players, LeClair said, but she doesn’t anticipate any trouble getting the tournament filled.

“I think this year it’s going to be sold out,” she said. “I guess because some people pay just to support it but might not come out (to play), we’ll have a waiting list. If somebody wants to come up and sign up that day, the tickets say if you’re not there five minutes till (the tournament), your seat might be given to somebody.”

People ask throughout the year when the tournament is coming, she said, and she always tells them it’s the first Saturday in April (the Saturday of the literary festival). That, of course, had to change this year.

“It’s just so popular,” she said. “A lot of politicians play. We kind of made a joke about it last year because we said, ‘Man, we should have protection’ because all of our politicians were under one roof. It was just a blast.”

“He is really the dynamic force that gets the players signed up,” she said. “He’s a great supporter.”

The Department of Health has identified COVID-19 clusters in 40 long-term care facilities in the state. For context, there are a total of 436 …