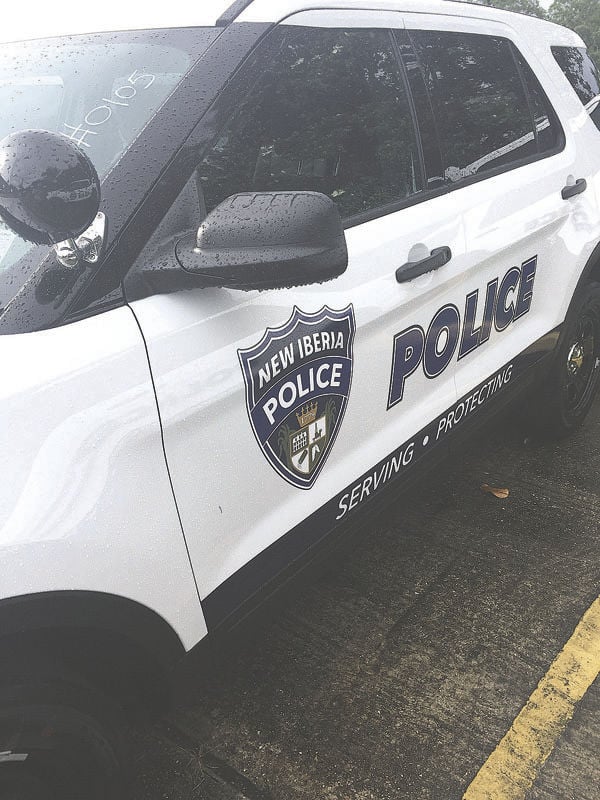 An New Iberia Police Department logo is brandished on one of the new vehicles that will be used by the police force. NIPD will officially begin patrols this Sunday. 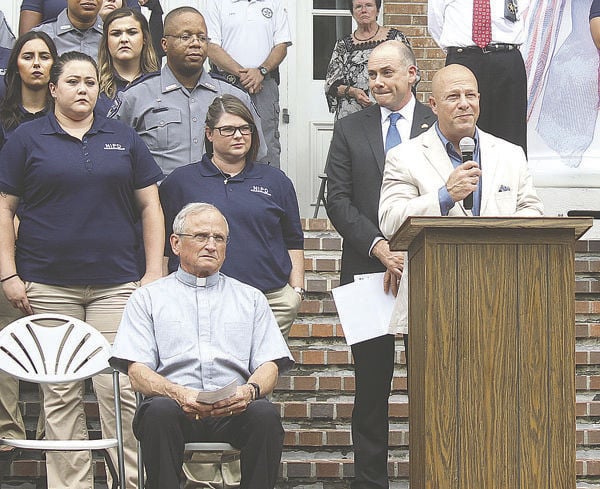 An New Iberia Police Department logo is brandished on one of the new vehicles that will be used by the police force. NIPD will officially begin patrols this Sunday.

Mayor Freddie DeCourt sat in his office the morning of June 17 mulling over a piece of paper on his desk — the speech that he was scheduled to make later in the afternoon for the swearing in of the New Iberia Police Department.

“I’ve got a little speech prepared,” DeCourt said, pointing to his notes. “I think I’m going to keep it short.”

The Mayor’s Office on the third floor of City Hall is always a little hectic. DeCourt and his senior staff leave their office doors open and ministers, publics officials and local residents who are scheduled for a meeting usually file in and out of DeCourt’s office while personnel usually chitchat about projects in other offices.

But lately there has been a noticeable change of energy. The day before the swearing in, employees for the NIPD started their first day on the clock, and boxes of office items and police equipment were being hauled from one floor to the other.

The rest of Tuesday was one New Iberia and the new officers of the NIPD will likely remember for a long time. The fountain in front of City Hall was turned blue, thanks to the efforts of the New Iberia Marching Men, and the Civic Center was filled with more people than when DeCourt and the New Iberia City Council were sworn in a year-and-a-half ago.

“It was amazing,” NIPD Patrol Captain John Babin said. “One of the things I can say since we’ve been here, people have been so welcoming to us.”

The sight of more than 60 officers brandishing the New Iberia Police Department badge is one that most city residents probably would have never imagined they see again. But the journey to bring back a city police department for New Iberia has been in the making since DeCourt took office.

The sight of NIPD officers was almost unthinkable two years ago, when DeCourt was running for office and law enforcement in the city of New Iberia seemed to be one of the most discussed issues.

At the time, DeCourt was facing two candidates who lined up on both extremes of the issue. Steven Stansbury, a longtime teacher in New Iberia, simply said the city lacked the money to get a police department up and running again. On the other hand was Raymond Crews, a libertarian and political newcomer, who thought establishing a new department was feasible if current city expenses were cut enough.

The New Iberia Police Department was initially disbanded in 2004, when the then-City Council narrowly passed a vote for its dissolution after long standing financial issues and tension between the city police and Mayor Ruth Fontenot.

As time went by, City Council members seemed to express the same frustrations with the IPSO contract. City government had no mechanism for implementing accountability for the contract, and city ordinances that dealt with nuisance laws were not being enforced, according to several council members over the years.

On the campaign trail, DeCourt took a moderate approach, never banking on one option. In fact, one idea of DeCourt’s that became popularized on the campaign trail was the idea of a third option, a hybrid where the Iberia Parish Sheriff’s Office would run investigations and a newly formed department could run day-to-day patrols and enforce city ordinances.

“Knowing what I know now on the eve of watching this department and having been a part of every step of it, the people in law enforcement who told me that would have been a disaster, God they were right,” DeCourt said with a laugh. “When you don’t know, you don’t know. I can’t tell you how many hours I tried to flesh that out because it was less money.”

Fast forward to after DeCourt was elected mayor in 2017, and the first New Iberia City Council meeting with DeCourt and the new City Council already involved talks about re-establishing the NIPD.

DeCourt said he began to seriously consider a full-fledged police department shortly after his election, and when he simply knew he could pay for it.

“I knew there was a community need,” he said. “I could see the direction of the crime, the direction things were taking and I’ve always been totally honest that I never thought the PD should have gone away, that was always my public and private position. I wanted to get a handle and see exactly what it would take.”

What was really needed was a plan. DeCourt likened the job to the ones he would take in the construction industry, where he would be told he couldn’t accomplish a project with the given amount.

“At a certain point, it was like ‘Hold my beer and watch me,” he said with a laugh.

Once the tax proposal passed the council, DeCourt quickly took up a strategy to set up numerous town hall meetings all over the city to pitch what the New Iberia Police Department would entail.

Convincing city voters to agree to a tax wasn’t an easy one, which DeCourt quickly admitted.

“I’ll never forget the first one, they beat me up and sent me on my way, and that happened a couple times,” DeCourt said, referring to a private group that had invited him to speak about the department at the time. “A few times I felt like man, you knew it was an uphill battle but I felt it with that.”

DeCourt said he took a queue from the Iberia Parish School Board, a local governmental entity that has often been successful with passing taxes.

“I took a play out of their book,” he said. “Every time they passed a tax, they laid it out, told you where and how they were spending it, which schools would get it. I knew I had to get a realistic plan, officers, salaries, it really didn’t change and it’s what we’re implementing.

“For people to have any faith in government you have to have a laid out plan. The town halls, you present it 20 times and even as I did it, it evolved into a better and better plan, it kind of forced me to. I think you have to build people’s trust, and I think in a few weeks the proof will be in the pudding that it’ll be exactly what I told them.”

When the tax passed, it guaranteed the necessary amount of money to New Iberia’s coffers needed for DeCourt to begin re-establishing the police department.

The mayor took to cleaning out the first floor of City Hall, a part of the building that had long been left to storage of city files. Less than a month after the election, the New Iberia City Council approved the hire of Chief Todd D’Albor, the police chief of the town of Jennings, who quickly set up his office in December of that year.

What surprised DeCourt at the time was the enthusiasm people began to show for the project. For DeCourt and the NICC, re-establishing the NIPD was simply a government move to address a problem in the city.

But for those in law enforcement, being apart of a completely new police entity was a novel idea, and something that many of the applicants were willing to take a drop in salary for.

“Cops don’t make a lot of money, and when I saw cops coming from communities where they make $10 to $15,000 more I’m saying, ‘Wait a minute, you want to leave this agency or this town for how much less money?’ That showed me we had something special, that people were coming here to be part of something.”

When a bond was floated for the department, and when revenue from the tax finally started to come in earlier this year, DeCourt and his staff were able to start one of the most enjoyable aspects of creating the NIPD — job-shopping for equipment.

“Anytime I got down or nervous, I would fall back on ‘let’s go shopping,’” DeCourt said. “I would find prices for furniture or equipment and try to beat the number they gave me. As people have come on board, I’ve got people doing it with me who know law enforcement, that’s added a fun element for the last 6 months.”

But less than a week into the NIPD hitting the road, the New Iberia community is feeling the brunt of local crime more than ever.

The month of June saw two fatalities, one homicide and several shootings. The homicide took the life of Levonne Johnson, who was in a McDonald’s parking lot in a main corridor of New Iberia. It struck a chord for many in the city, including business leaders.

The community in New Iberia’s West End, which includes the inner city, has been feeling the problem more drastically. Shootings, homicides, robberies have become a fact of life in these areas and those trying to solve the problem are looking to the NIPD as an instrumental component of solving it.

“It’s only gotten worse,” DeCourt said. “There are more day to day occurrences, our issues are raising their heads. I think that last shoot at the McDonald’s just really hammered the point. The break ins and shootings, we have got to get a handle on that.”

It’s a point that DeCourt sees echoed in the community. The conversation has changed from two years ago, when the public debate focused on having a police department. DeCourt said residents are now wondering how soon they can get here.

“I’ll go to Lowe’s on the weekend or eat somewhere, and all I hear is ‘When are your people coming?’ And when I tell them July 1 I hear ‘Why can’t they come now?’”