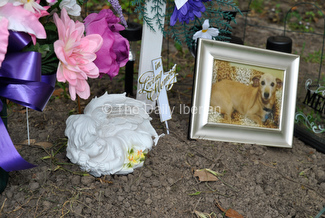 The grave site of Max, a terrier-beagle mix dog that was part of Janelle DeRouen’s family for 29 years, is marked with mementos and flowers. 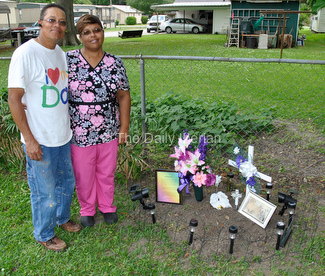 Janelle and Billy DeRouen stand next to the grave of Max, their terrier-beagle mix that died Saturday. Max was 29 and was to be recognized as the World’s Oldest Dog by the Guinness Book of World Records.

The grave site of Max, a terrier-beagle mix dog that was part of Janelle DeRouen’s family for 29 years, is marked with mementos and flowers.

Janelle and Billy DeRouen stand next to the grave of Max, their terrier-beagle mix that died Saturday. Max was 29 and was to be recognized as the World’s Oldest Dog by the Guinness Book of World Records.

Twenty-nine-year-old Max died Saturday just weeks shy of being recognized as the World’s Oldest Dog by the Guinness World Records.

Max, a beagle, dachshund and terrier mix, had been with his owner Janelle DeRouen since she adopted him as a puppy from a local sugar cane farmer in 1983. Max grew up with her children and grandchildren, she said, and he would have been 30 years old Aug. 9.

“It was rough. It’s been not so good,” DeRouen said about Max’s death. “Even the grandkids could not believe it. Everyone is still trying to recuperate. I didn’t even sleep at all Saturday night.”

DeRouen said Max had been a relatively healthy dog until four months ago when he began having seizures. The veterinarian said the seizures were brought on by Max’s age, and the dog died of a grand mal seizure around 2 p.m. Saturday.

“We brought him to the vet and they couldn’t save him,” she said. “There was nothing that could be done.”

Janelle DeRouen said her entire family is mourning the loss of the pet because he felt like a family member. She said her granddaughter Alaija, 8, cried and said she was sad she would not be able to take Max for a walk around the backyard because she always wanted to make sure he exercised.

Her husband of 14 years, Billy DeRouen, said he remembers the relationship he had with Max when first he met the pup. Max was jealous of him, he said, because he was intruding on his territory, but once he began playing with him the two bonded.

“I’m just sorry that he passed away, and I wish that he would have been able to get into the Guinness Book of World Records,” he said. “I’m just sad he didn’t make it to get the recognition he deserved.”

Janelle DeRouen said the couple spent the past five years rallying to get Max recognized as the World’s Oldest Dog, but the organization did not respond until May 15 when the claim was approved. She said she is disappointed he never officially held the title, but she still thinks he will leave a local legacy.

“Everybody who knows Max and people in the community, we at least had the knowledge that he was the oldest,” she said. “Everybody has been calling and sending their condolences. They knew what type of dog Max was.”

Janelle DeRouen said Wikipedia, The World Academy and The Telegraph all have recognized him as the World’s Oldest Dog.

“He tried all he could to hang in there to get the recognition that should be given to him,” she said.

Max was buried in the couple’s backyard along the fence underneath a tree which was one of his favorite places to sit, Janelle DeRouen said. She said he was buried in his blanket with his bed, and his gravesite is adorned with flowers, poems and lights that surround the grave.

“I know he’s now in God’s hands, and he traveled that last journey with us, but we’ll see him one day,” she said. “We’ll all be together again.”

The couple has two other dogs, a mixed Chihuahua and a mixed Pomeranian, neither of which has barked since Max’s death, Janelle DeRouen said. She said she is unsure as of now if she plans to get another dog.

“If it happens then it happens. I’m just a dog lover, and I always have been,” she said. “When I had Max it was just this longevity. He has been with me, and now it’s so hard.”

“I’ll never get another Max. I can tell you that.”