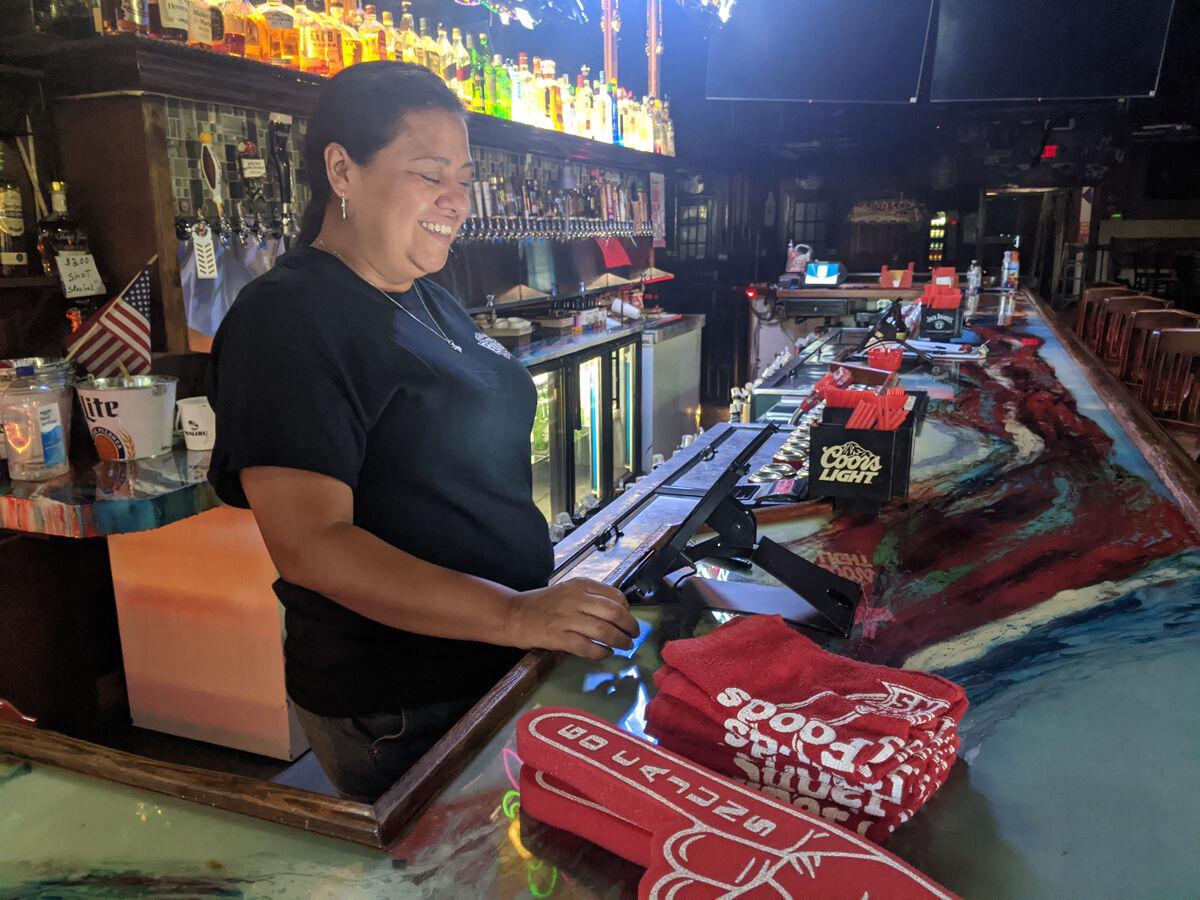 Bourbon Hall co-owner Danita Maldonado helps prepare the bar in downtown New Iberia for a projected opening today as Iberia Parish’s COVID-19 infection rates are projected to fall below the governor’s level to allow the businesses to reopen. 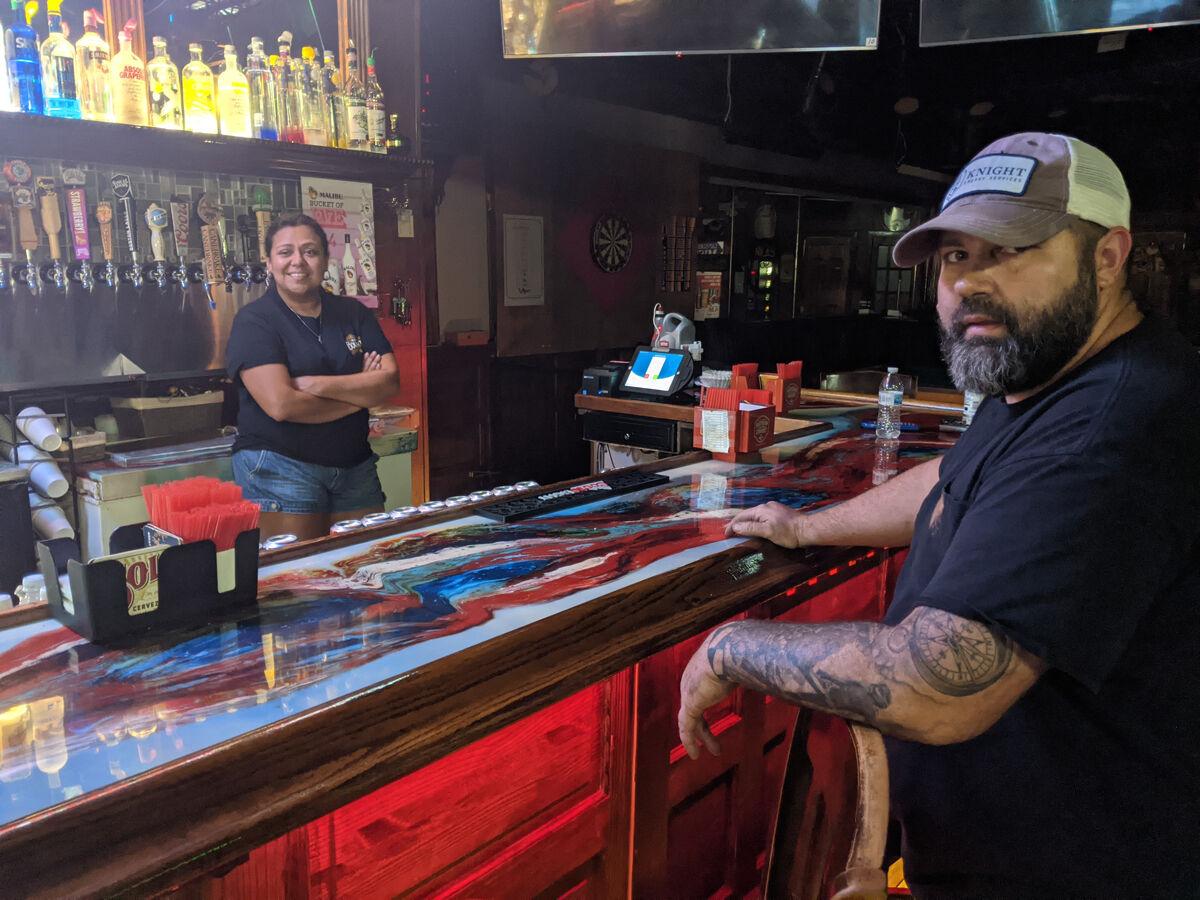 Bourbon Hall co-owner Danita Maldonado helps prepare the bar in downtown New Iberia for a projected opening today as Iberia Parish’s COVID-19 infection rates are projected to fall below the governor’s level to allow the businesses to reopen.

Barring a surprising shift in infection rates in Iberia Parish, she and her fiancé, Caroll Trahan, expect to be able to open up their bar, albeit at a limited capacity, sometime Wednesday afternoon.

“We are moving some things around,” she said. “We can’t have bar service, so we’re putting a couple of tables in instead.”

The couple bought the bar in December and were doing well until the coronavirus pandemic forced them to close — then close again after a five-week respite — while still watching bills come in for loans and utilities, not to mention lost inventory.

“I had beers stacked from here to here,” Trahan said, pointing from the middle of the long bar to the far end. “Some of it I was able to sell, but the rest is in a box in the back, ready to throw out.”

Across town, at Quarter Tavern, Ty Boudoin is looking forward to making money again instead of just paying it out.

“It’s been costing me $6,100 a month just to stay closed,” he said. “That’s just rent and utilities. It doesn’t even include any lost profit.”

Boudoin said he had already talked to Iberia Parish President Larry Richard about the potential of being able to open after noon Wednesday, when the state releases its weekly percent positivity rate for the parish.

The parish was at 3.5 percent positivity in last week’s seven-day average, but had been at 5.5 percent the previous week. Under Gov. John Bel Edwards’ Phase 3 restrictions, bars can reopen with tableside service only, standing and bar service prohibited, and that the businesses stop all alcohol sales and service by 11 p.m. Indoor capacity is also limited to 25 percent of a business’ occupancy rate or 50 people, whichever is less.

Outdoor service is also limited to 50 people for tableside service only. Tables indoors and out have to be spaced in accordance with State Fire Marshal social distancing guidelines, with no one under the age of 21 allowed on to the premises.

Another caveat is that live music is prohibited.

Those restrictions mean that bar owners will face a challenge to maintain the profit margins they had become used to.

“It just depends,” Boudoin said. “I’m hoping the customers come back like they did last time. It’s hard to say. It will take a few months to be breaking even again, if not longer.”

The challenge for the owners, and for the parish as a whole, will be to maintain a low positivity rate in its seven-day average of COVID-19 tests. If that rate increases again, above 10 percent, the restrictions on bars kick in. Again.

The owners at Bourbon Hall said they have been working throughout the downtime cleaning and recleaning every nook and cranny of their business.

“We have a team meeting tomorrow,” Maldonado said. “Everyone will be told that they have to clean everything. I don’t want to be that bar that has a case turn up and start this all over again.”

But for now Maldonado, who said it has cost “several thousand” dollars a month to keep Bourbon Hall working during the shutdown, is eager to get back to work.

“We are planning to open as soon as we get word!” she said. “Right now, we’re dying. It’s been seven months that we have been closed, dealing with this. Seven months!”

She said that the bar’s one open night earlier this month, a premature celebration when Phase 3 was initially announced but before the restrictions for bars were defined, gave her a positive outlook for the future of the business.

As bar owners await Wednesday’s update of the infection rates for their parishes to determine whether or not they can reopen, the state’s late…