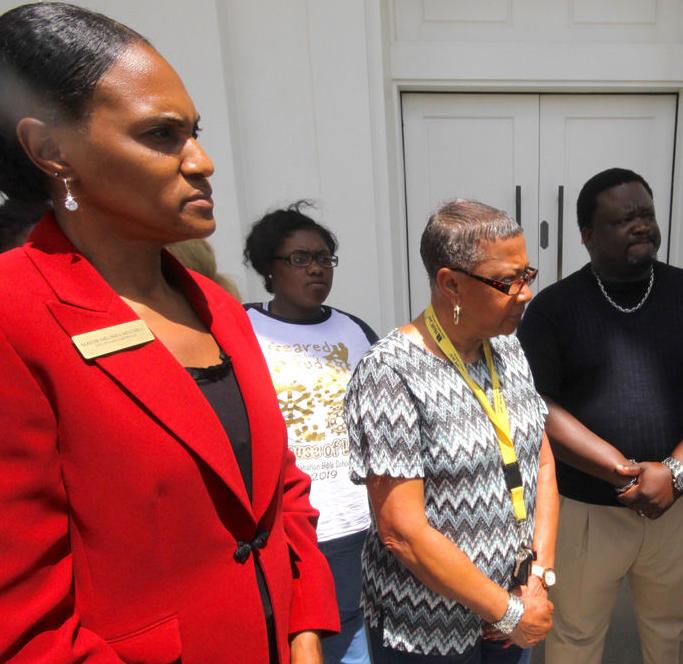 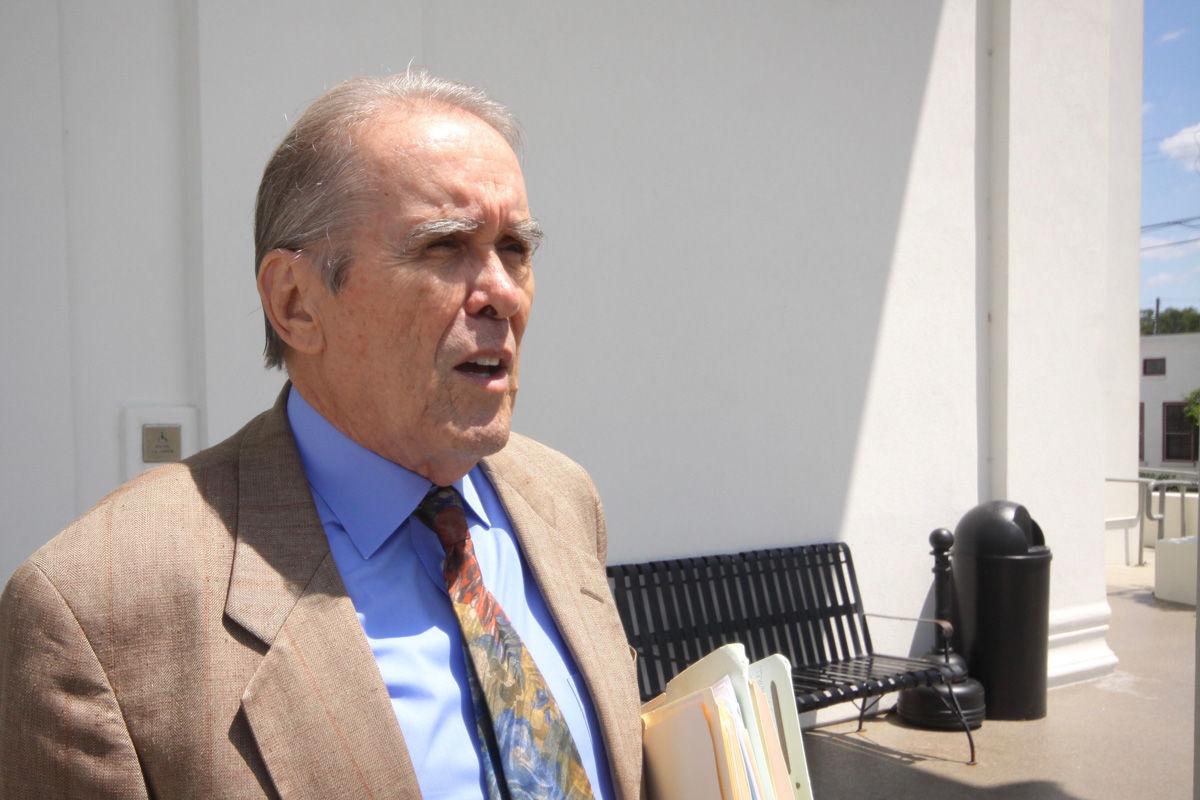 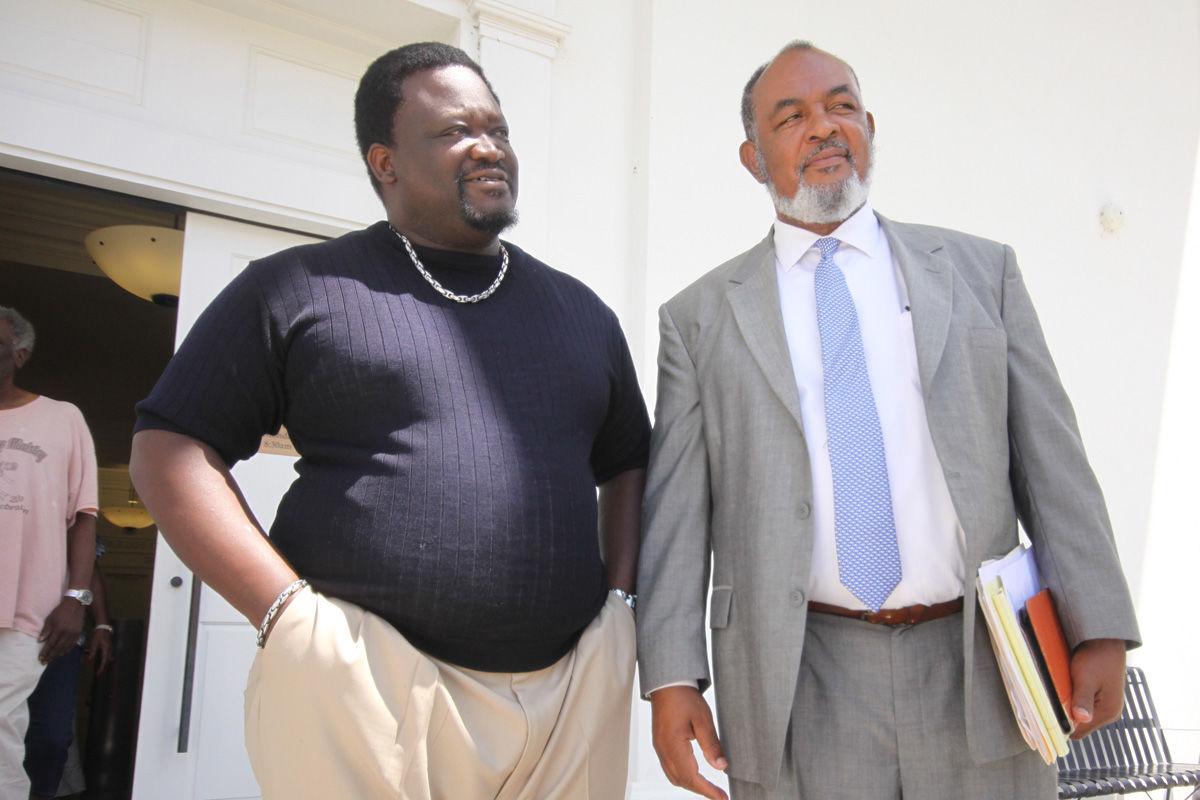 Lawrence "Nanny" Mitchell, left, stands on the courthouse steps in St. Martinville with his attorney, John Milton, during the lunch break in a hearing Tuesday.

Lawrence "Nanny" Mitchell, left, stands on the courthouse steps in St. Martinville with his attorney, John Milton, during the lunch break in a hearing Tuesday.

In granting the temporary order, Judge Lewis Pitman scaled down the scope of the city’s request. The original order would have banned Mitchell from all city buildings and property except for family events in the city’s parks.

Instead, Pitman issued the order banning Mitchell from the city’s Public Works barn and any property on which Public Works crews were working. He also limited the scope of contact Mitchell could have with city employees. The original request would have banned Mitchell from any contact with city employees during work hours. Pitman’s order bans Mitchell from contacting five employees who filed affidavits in support of the order during work hours and from contacting them about city business during their off hours.

“I agree with the judge’s decision,” Durand said after the hearing.

Pitman made it clear that violation of the restraining order would be considered contempt of court, a civil charge.

Aside from the affidavits from Mayor Pro Tem Craig Prosper and the five Public Works employees citing their encounters with Mitchell during the performance of their work, the city did not present any witnesses during the hearing.

The affidavits primarily focused on issues surrounding the removal of a tree trunk at the corner of Vivier and Jefferson streets on July 17. According to the statement from Public Works employee Mark Girouard, Mitchell stopped and questioned the employees, then “fussed” at them, took pictures and shot video of the work, which he claimed was being done on private property. Mitchell later acknowledged he did not know where the actual property line fell, or where the public right of way ended.

Employee Mike Martin, who cut the tree stump, said under oath that the stump was about 15 feet from the road, which would place it in the right-of-way and not on private property. He also said that the stump was next to a fire hydrant, which is why he was assigned to remove it.

Afterward, according to the statements, Mitchell went the the Public Works barn to confront Brian Touchet, the city’s maintenance supervisor. When Touchet was not available immediately, Mitchell went back out into the Public Works yard, where he confronted Martin. Martin said Mitchell cursed at him, asked if he wanted to fight him, then said he was going to get Touchet to curse at him so he could get him fired.

Martin is the same employee who gave a statement in March against former Public Works Superintendent Charlie Rader, claiming Rader had used a racial epithet against him. Rader was fired shortly thereafter. In the latest incident, however, other employees verified Martin’s statements.

In his statement, Touchet also described another incident. He said that on July 18, the day after Mitchell had gone to Vivian Street and the Public Works barn, Mitchell approached him and District 3 Councilman Dennis Paul Williams on New Market Street, between City Hall and the St. Martinville Police station. Touchet wrote that at that time Mitchell was abusive to the point that Williams stepped between the two men. Touchet said Mitchell continued to “bump” Williams, attempting to get to Touchet.

John Milton, attorney for Mitchell, called seven witnesses to attest to Mitchell’s character, including Mitchell and his wife.

Those witnesses said they had not known Mitchell to harm anyone and that he was a kind person. Mitchell himself said he had not disrespected anyone at any time.

Local businessman Mark Brignac, who has been involved in a running battle with the city council over repairs to power poles and lines at his mobile home park, said Mitchell “has always been a jolly person.”

Brignac said that he had received a letter from Durand limiting his access to the Public Works barn as well, instructing him to direct any questions or requests in writing to either Touchet or Mayor Mitchell.

“It’s like getting tape over my mouth,” Brignac said.

Milton earned an objection when he characterized the City Council’s actions toward Brignac and Mr. Mitchell as a “Gestapo-type operation.”

But some of the testimony, specifically that of Mayor Melinda Mitchell, conflicted with the soft and fluffy image of Mr. Mitchell.

“His bark is bigger than his bite,” Mayor Mitchell said. “He’s not going to harm anyone.”

Initially Mayor Mitchell said none of the employees filing affidavits besides Touchet had approached her about Mr. Mitchell’s behavior.

“The employees, they don’t come to me,” she said. “I don’t know if they are afraid or what.”

She later said Martin had called her to let her know her husband had been at the site where Martin and another worker were cutting and removing the tree stump.

Under cross examination, she also said she had spoken to a former City Hall employee, Ginger Theriot, who approached Mayor Mitchell as she entered City Hall one day to quit, handing the mayor her key to the building.

According to Mayor Mitchell, Theriot said Mr. Mitchell had cursed at her and embarrassed her in front of other city clients. Although Mayor Mitchell said she was able to talk Theriot into staying that day, Theriot quit shortly thereafter.

In issuing his order, Pitman cited Mayor Mitchell’s testimony as a decision point.

“All of the city employees know that Lawrence Mitchell is the mayor’s husband,” Pitman said. “His presence creates an uncomfortable environment.”

The proceeding Wednesday started off with a motion from Milton to disqualify Durand from representing the city in the matter, saying that he had a conflict of interest because he had material knowledge of facts that could be questioned in a court hearing on a permanent injunction against Mitchell. Durand took the stand to defend his position, saying the only material facts he knew were those involving Prosper’s complaints and actions against Mitchell after Mitchell threatened him during a phone call in December.

Prosper has since sought and received his own order against Mitchell.

Pitman allowed Durand to continue after removing Prosper’s affidavit from the evidence presented.

After the hearing, Milton said that he planned to contest the decision when the temporary order expires in 10 days. He also said he would contest any permanent injunction.

“This is about race,” Milton said, even though four of the affiants, like Mitchell, are black. “They are afraid to see a strong black man speak out.”

Mayor Mitchell said she stands by her husband.