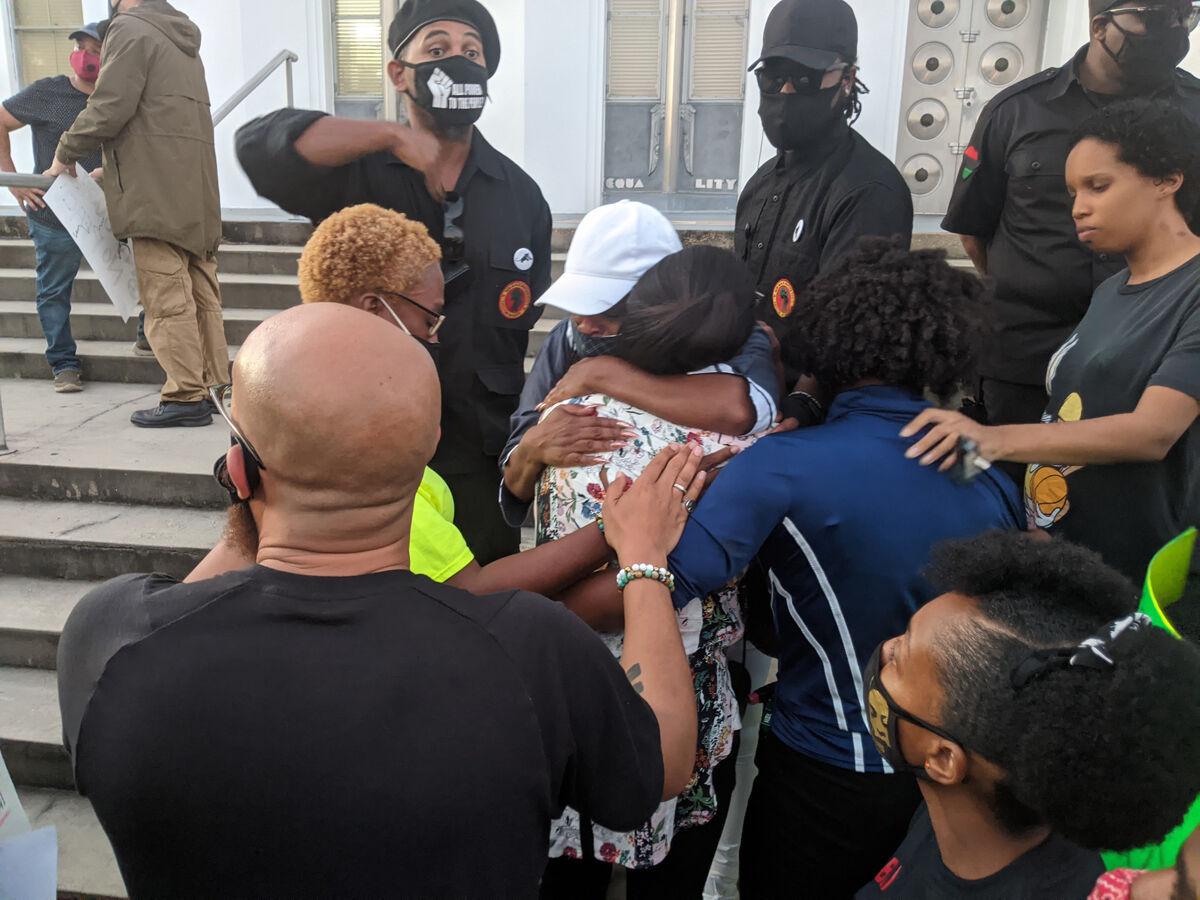 Family and friends surround Roxanne Nelson (back to camera in white tunic), mother of Quawan ‘Bobby’ Charles, as they grieve after a rally seeking an arrest in the Baldwin 15-year-old’s death. 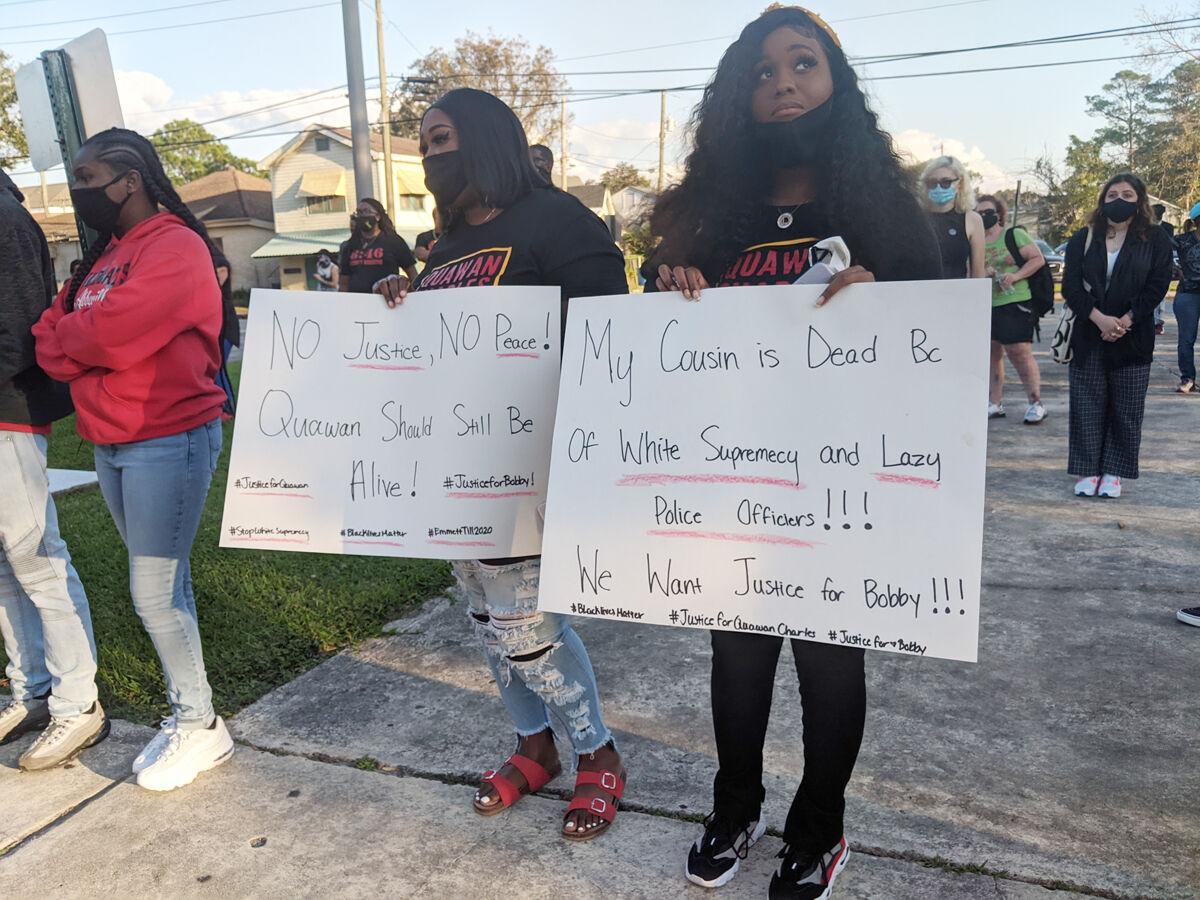 Members of Quawan ‘Bobby’ Charles’ family held up posters during a rally calling for law enforcement to make an arrest in the Baldwin 15-year-old’s death. He was reported missing on Oct. 30. His body was found outside Loreauville on Nov. 3. 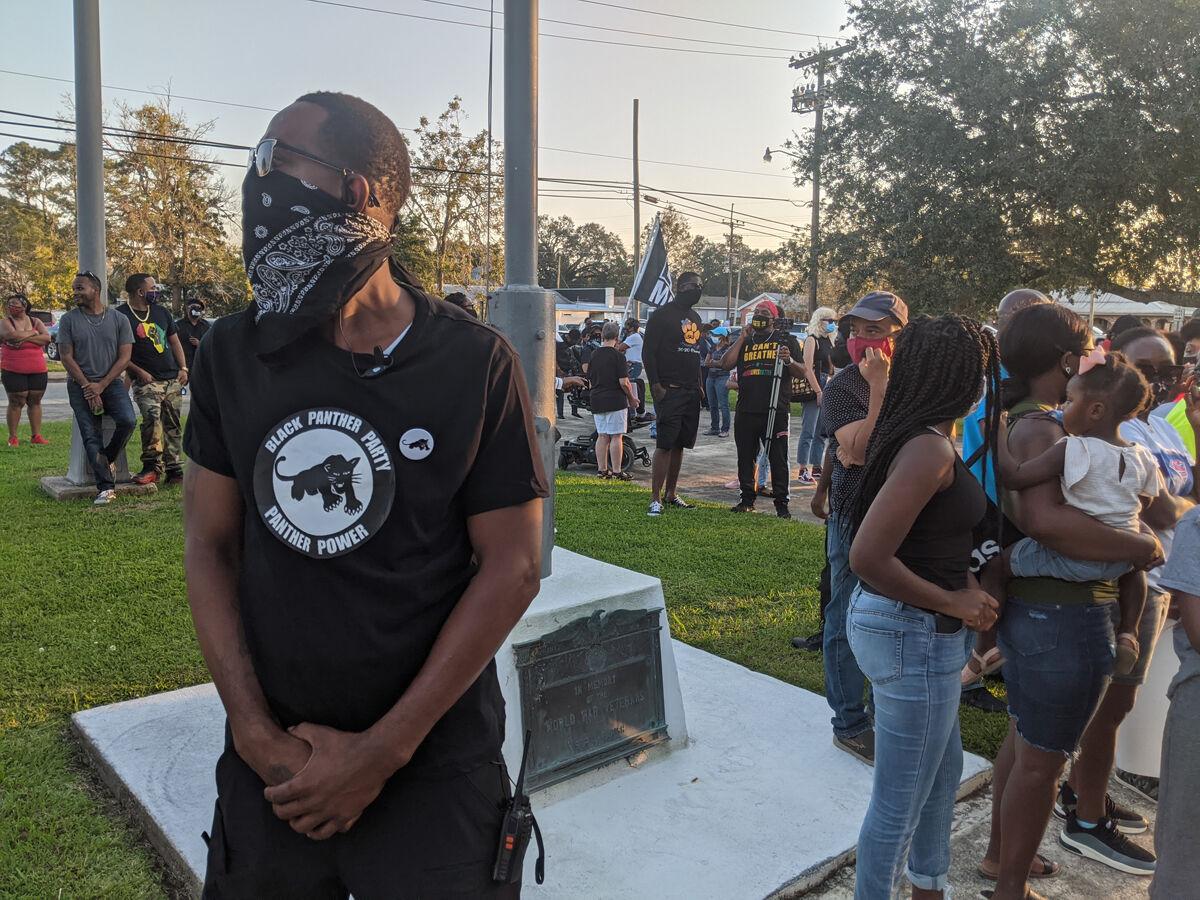 More than 100 people gathered on the front steps of the Iberia Parish Courthouse Wednesday evening to call for law enforcement to make an arrest in the death of 15-year-old Quawan “Bobby” Charles of Baldwin. Charles’ bodt was discovered in a field outside Loreauville on Nov. 3.

Family and friends surround Roxanne Nelson (back to camera in white tunic), mother of Quawan ‘Bobby’ Charles, as they grieve after a rally seeking an arrest in the Baldwin 15-year-old’s death.

Members of Quawan ‘Bobby’ Charles’ family held up posters during a rally calling for law enforcement to make an arrest in the Baldwin 15-year-old’s death. He was reported missing on Oct. 30. His body was found outside Loreauville on Nov. 3.

More than 100 people gathered on the front steps of the Iberia Parish Courthouse Wednesday evening to call for law enforcement to make an arrest in the death of 15-year-old Quawan “Bobby” Charles of Baldwin. Charles’ bodt was discovered in a field outside Loreauville on Nov. 3.

For many, Wednesday night had a feeling of déja vu.

More than 100 people were standing on the front lawn and steps of the Iberia Parish Courthouse. A young Black man was dead under questionable circumstances. Family members were grieving, distraught and obviously shaken.

Above it all circled calls for justice, claims that two separate systems of law enforcement were at work — one for the White residents of Iberia Parish, another for those with darker skin.

Almost seven years ago, some of the same people who were present at Wednesday night’s rally for justice in the death of Quawan “Bobby” Charles were standing in exactly the same places after the death of Victor White III while in the custody of the Iberia Parish Sheriff’s Office. But the circumstances of Charles’ death are different, even if the cries of unequal protection under the law were eerily similar.

Charles’ body was found outside Loreauville on the evening of Nov. 3. According to family members, he had been reported missing days earlier, on Oct. 30, from his home in Baldwin. At the rally Wednesday evening, Iberia Parish Council District 12 Councilwoman Lady Fontenette Brown called for calm, telling the crowd that newly elected Iberia Parish Sheriff Tommy Romero had spoken with her and told her the investigation was a priority for his agency.

That position, however, did not sit well with other speakers on the steps. According to Jamaal Taylor, community organizer with The Village, a group in Lafayette, the law enforcement response was not acceptable.

“A Baldwin Police officer and a St. Mary Parish deputy arrived,” he said. “They said, ‘He’s probably at a football game. Truth is, they consistently tell us lies, then tell us they are going to fix it. Well, I spent 400 years waiting for something to be fixed that I didn’t break.

“This family has been waiting far too long for the perpetrator of this heinous crime — and her family — to be in jail,” Taylor said to cries of support from the crowd.

“They were elected into office, right?” she asked. “Then you can take them out.”

Despite the vitriol hurled his way during the rally, when contacted Thursday Romero said his office has been working overtime to chase down evidence and leads in the Charles case.

“I met with the family last week,” Romero said. “After talking with them, I had my deputies search and begin an investigation. In less than four hours, we had found his body and were working to develop leads in his death.”

Since that time, Romero said his office has informed the Charles family of progress in the investigation. He also emphasized that the investigation has a procedure that has to be followed if it is to be fruitful.

“We are still awaiting the coroner’s report on the autopsy and the toxicology samples,” Romero said. “That takes time.”

He also said that he feels for the family and understands the pain they are going through.

“I am a parent,” he said. “I’m from Loreauville. So I understand how they feel and what their loss is like. But my investigators are following leads, and developing new leads. And as they track those down, it takes time.”

Another argument raised during the rally — that Duhé should seek a warrant for the arrest of the woman who picked up and drove Charles to Loreauville — was not the way the legal system worked.

“We are a prosecutorial agency,” Duhé said Thursday. “When we receive an investigative report, we evaluate it and determine whether or not to seek a prosecution. But we are not an investigative body. That is the work of the Sheriff’s Office.”

A lack of response

One thing that Romero said was that there was no notice given to his office prior to the plea for help from the Charles family.

“I had not heard anything about this young man being missing before the family came to me on Nov. 3,” he said. “We did not see an amber alert or anything like that.”

As for conjecture that has run rampant online postulating the circumstances of Charles’ death, Romero said he was waiting for his investigators to complete their work.

“We are working over every day developing leads and turning every stone over,” he said. “Sometimes as you find new evidence, it leads you in different directions. When we have completed our investigation, then we will move it forward.”

Calls to the Baldwin Police Department for comment Thursday on this story were not returned.

‘We will be back’

Celina Charles, Quawan’s aunt, said her life is dedicated full-time to seeking justice for her nephew.

“I am here,” the Texas resident said. “I am here until we have justice.”

She also said that Wednesday’s rally will not be the last.

“We will be back,” she said. “We are not going away until we have justice for Quawan.”

The timeline so far:

Friday, Oct. 30 — Quawan “Bobby” Charles is picked up from his home in Baldwin and taken to Loreauville. His family are not aware of his whereabouts. That evening, the family reports him missing to the Baldwin Police Department.

Tuesday, Nov. 3 — Family members meet with Iberia Parish Sheriff Tommy Romero, asking for his help. Romero has his investigators and deputies look into the case. About four hours later, Charles’ body is discovered outside Loreauville.

Thursday, Nov. 5 — In response to requests from local media, IPSO releases a statement that the body of a young man had been found and that an investigation was underway.

Tuesday, Nov. 10 — IPSO releases second statement, noting the investigation is underway and that the family of the victim has been in communication with investigators.

Wednesday, Nov. 11 — Members of the Charles family, along with representatives of several civil rights organizations, rally to call for arrests in Charles’ death.

According to the Iberia Parish Coroner’s Office, Quawan Charles probably died from drowning, although the manner of his death is still under i…