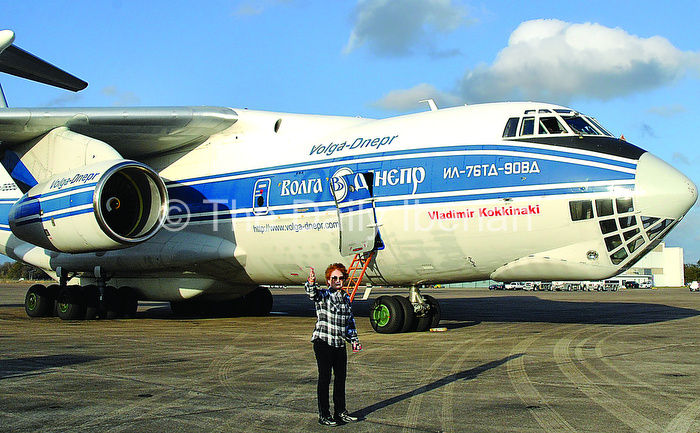 Michele Wilkinson, Tailwind International president and founder, gestures Monday while standing in front of a huge cargo plane at ARA. The huge plane collected cargo here and flew this morning to Singapore. 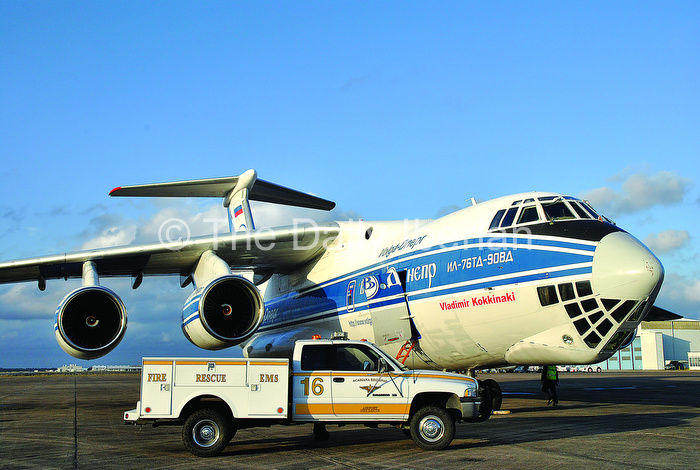 This Ilyushin II-76D plane dwarfs a local emergency response vehicle while on the runway Monday afternoon at Acadiana Regional Airport.

Michele Wilkinson, Tailwind International president and founder, gestures Monday while standing in front of a huge cargo plane at ARA. The huge plane collected cargo here and flew this morning to Singapore.

This Ilyushin II-76D plane dwarfs a local emergency response vehicle while on the runway Monday afternoon at Acadiana Regional Airport.

A Russian-manufactured Ilyushin Il-76D plane made its first stop in Iberia Parish when it landed with 120,000 pounds of outsized survey equipment. ARA was chosen because of the size of the plane, operated by Volga Dnepr Airlines, and its cargo.

“We were contacted Thursday afternoon by a charter logistics company and they said a local company needed to fly some freight out of here (Iberia Parish) and ultimately go to Singapore,” Iberia Parish Airport Authority Director Jason Devillier said. “They wanted to know if we could handle an aircraft of this size and I said, ‘We sure can.’ ”

The big plane arrived at ARA around 4 p.m. to a crowd of about 20 to 30 onlookers. The aircraft, a white and blue four-engine 203,000-pound monster that dwarfed other private jets in the area, was loaded shortly after arriving and was scheduled to leave this morning at 9 a.m.

The aircraft was delivering for Fugro GeoSurfaces Inc., a marine geophysics and seafloor mapping company, based out of Lafayette.

“Hopefully this will be the first of a lot more now that this company knows we are here and available and that we can facilitate something of this size,” Devillier said. “I think the word will get out pretty quick that we can handle something of this size. Our big advantage is the length of the runway (8,000 feet) and the weight it can withstand.”

In the near future, Devillier said the airport will continue to make improvements to the concrete construction of the runway, taxiways and tarmac at ARA. Doing so could allow for more aircrafts to choose ARA as a potential destination, he said.

The ARA will have updated taxiway lights, runway lights and complete joint sealing of concrete slabs on the runway, which is close to $3 million in improvement, Devillier said.

ARA wasn’t the first choice, however. Wilkinson also spoke with Lafayette Regional Airport officials, she said, but there were concerns about that airport’s capability to handle the size of the aircraft.

“They (Lafayette airport officials) didn’t want us,” Wilkinson said in an interview shortly after the Ilyushin Il-76D’s arrival. “I think they were afraid about the amount of weight on the runway. So we have to go with what they say.”

Wilkinson said the ARA’s successful accommodation of the Il-76D by ARA could open the door for future business with the airport.

“Our concerns were, first — could the airport handle it? Were they big enough and long enough? And because they have an 8,000-foot runway we figured they could handle it,” Wilkinson said.

“These people in New Iberia opened their arms to us and we love the hospitality and we’re definitely delighted to know about this airport so that opens the door for future opportunities.”