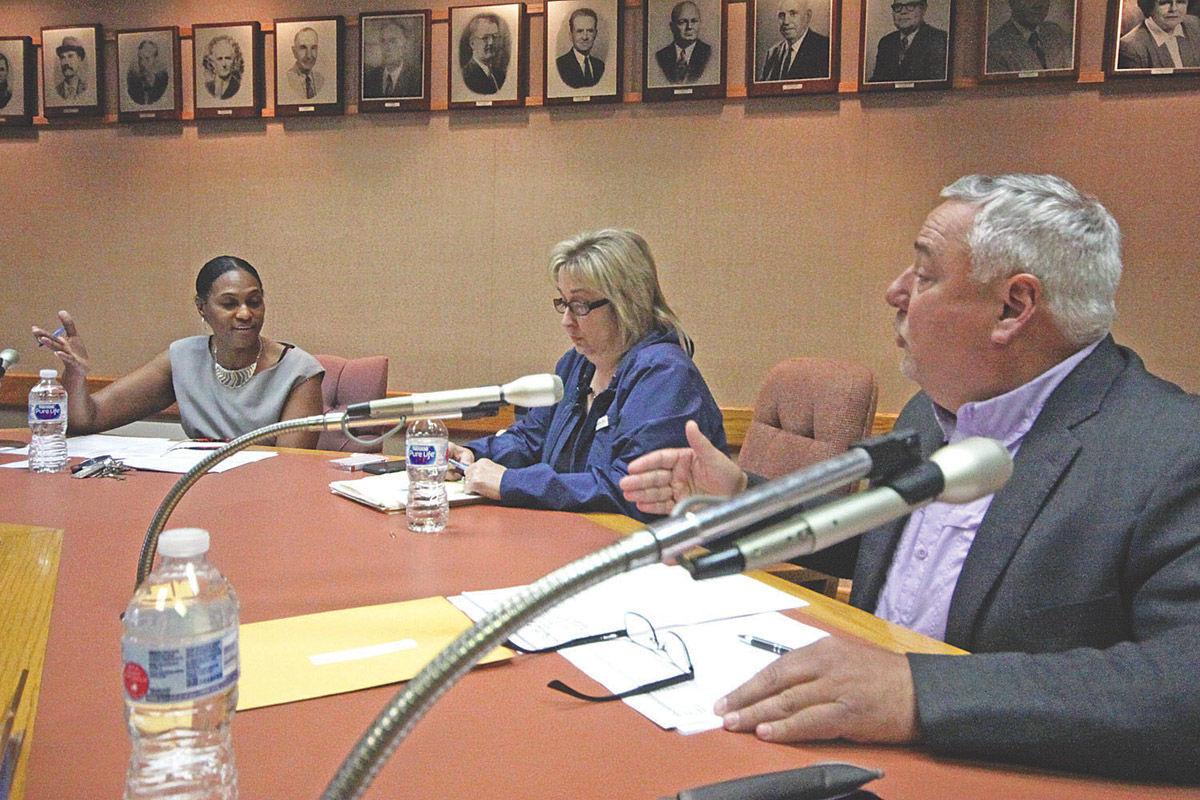 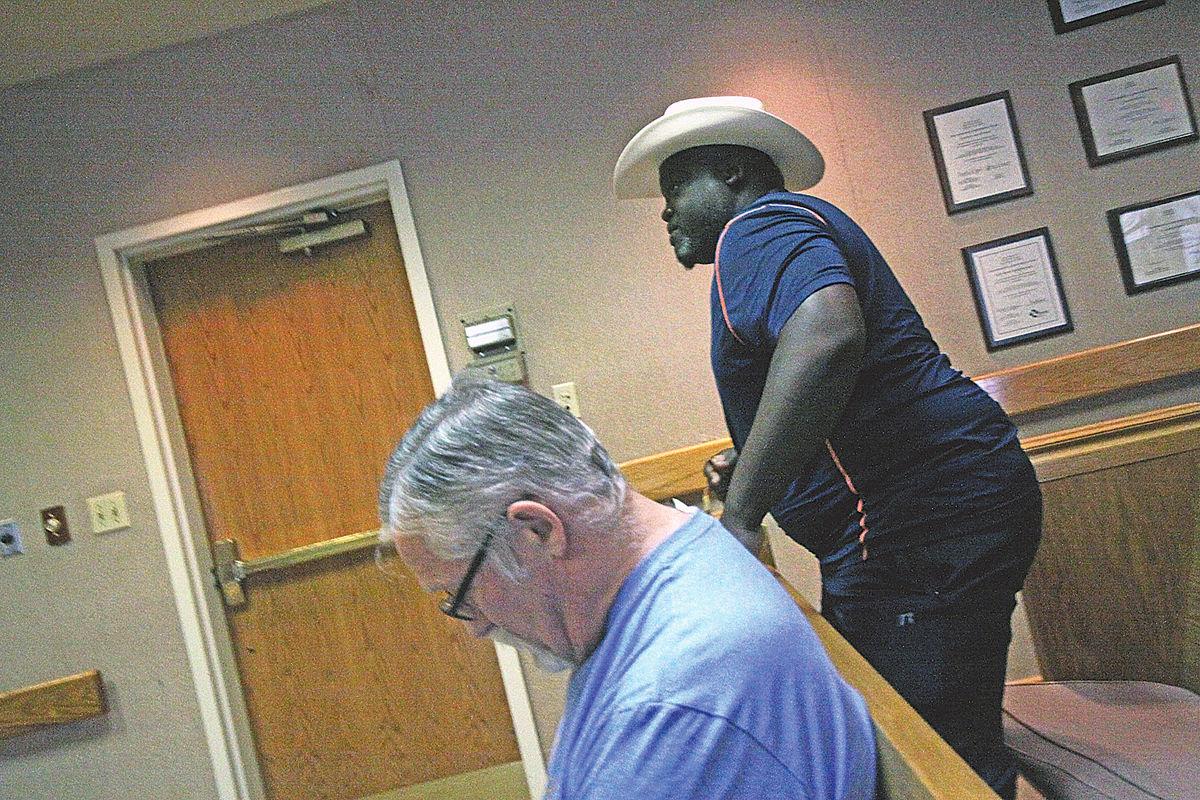 Lawrence "Nanny" Mitchell gets up to leave moments after arriving at a special meeting of the St. Martinville City Council during a discussion of the city's accounting problems. Mitchell was arrested later Friday night for violating, for the third time this year, a protective order Mayor Pro Tem Craig Prosper had placed against him in January.

Lawrence "Nanny" Mitchell gets up to leave moments after arriving at a special meeting of the St. Martinville City Council during a discussion of the city's accounting problems. Mitchell was arrested later Friday night for violating, for the third time this year, a protective order Mayor Pro Tem Craig Prosper had placed against him in January.

ST. MARTINVILLE — Mayor Pro Tem Craig Prosper said Saturday he is planning to announce his resignation next week after Mayor Melinda Mitchell’s husband, Lawrence “Nanny” Mitchell, was released on a $500 bond Saturday morning after he violated a civil protective order for the third time since it was put in place in January, this time entering a special meeting of the city council and sitting directly in front of Prosper, staring him down before Melinda Mitchell asked him to leave.

“The system is failing us,” Prosper said. “This man has consistently violated a protective order. I don’t have a door to escape if anything happens. I have taken all of the proper steps, and after three violations he is released on a $500 bond? It might as well have been $50.”

The civil protective order, set in January, orders that Mitchell stay at least 100 yards away from Prosper at all times.

Sixteenth Judicial District Judge Suzanne DeMahy set Mitchell’s bond Saturday morning. When asked Saturday evening for a reason for the low bond amount, she said the code of judicial conduct prohibits her from commenting to the media on pending matters before the court, even though the bond has already been set and is no longer pending.

Friday’s special meeting of the St. Martinville City Council was supposed to be a short, simple affair. The council’s vote to hire a new chief administrative officer was quick, and without dissent. A discussion of compensation for other finance department employees, however, drew debate, stretching the meeting longer and becoming more contentious.

Prosper was listing some of the financial problems he saw facing the city when the door to the council meeting room opened. Lawrence Mitchell and O’Neal Bosley Jr., a blogger from White Castle, walked in with Bosley holding his cell phone in the air as if filming their entrance. The pair sat in the row of seats directly in front of Prosper.

Mitchell then leaned forward, staring at Prosper. Prosper stopped speaking, then said, “He is not supposed to be here.”

Mitchell responded indistinctly, but made no move to leave.

Prosper then rose, announced he was leaving the meeting, and headed to the side door. Mitchell also rose and turned to leave through the main entrance. He went outside city hall, where he waited while the meeting resumed.

“I was scared when I saw him coming into the meeting like that with his hands in his jacket pockets,” Prosper said later. “I’m still a little shaken up.”

Although he was only charged with one count of violating the order during the meeting, officers said Mitchell also harassed Prosper after the meeting, honking his car horn, gesturing and yelling at Prosper as he was driving away from city hall.

Martin also said Mitchell refused to surrender when told he was going to be arrested.

“He said if we wanted him, we’d have to go get him,” Martin said.

Mitchell was located in south St. Martinville and arrested later Friday night. Martin said Michell claimed he was mistreated and threw himself on the ground when officers tried to take him out of the police unit. Mitchell then requested medical treatment before being booked. Officers were transporting Mitchell to St. Martin Hospital, but he refused to go there. After being evaluated at Our Lady of Lourdes in Lafayette, Mitchell was returned to the St. Martin Parish Jail for booking.

Prosper has previously said it was an argument over the city council’s agenda in early December between him and the mayor that led Mitchell to make threats against Prosper. According to Prosper, Mitchell cursed and threatened him over the phone with the St. Martinville police chief present, saying “I will ******* kill you!”

Prosper’s initial request for a justice of the peace bond against Lawrence Mitchell in the days after that incident was not granted, leading Prosper to seek the temporary order in January.

The first arrest, on Jan. 4, came hours after a temporary protective order in state court. Mitchell went to city hall shortly after that order was issued, immediately violating it. Prosper filed a complaint with the St. Martin Parish Sheriff’s Office to have the order enforced, and Mitchell was arrested that evening.

Sixteenth Judicial District Judge Louis Pitman issued a 12-month order on Jan. 25, superseding the temporary order. In issuing the order, Pitman explained to Mitchell it was his responsibility to either leave the premises or otherwise avoid Prosper if they were in any place simultaneously. If Mitchell failed to do so, Prosper could file a complaint which could lead to Lawrence Mitchell facing a contempt of court charge.

Four days later, on Jan. 29, Mitchell arrived at a town hall meeting Prosper was attending and refused to leave. He was again arrested. He was released the next day on $2,000 bond.

Mitchell was also recorded last month cursing at police officers after a neighbor reported him for burning furniture in his yard. In addition to using profanity and initially refusing to let firefighters on the property to make sure the fire was out, Mitchell tried to intimidate the officer with his wife’s position, reminding him that “she’s your boss.”

Mitchell received a citation for illegal burning in that incident.

Mitchell is also forbidden from contacting Prosper personally, by phone, in writing, electronically through email or text messaging, over social media or through a third person.