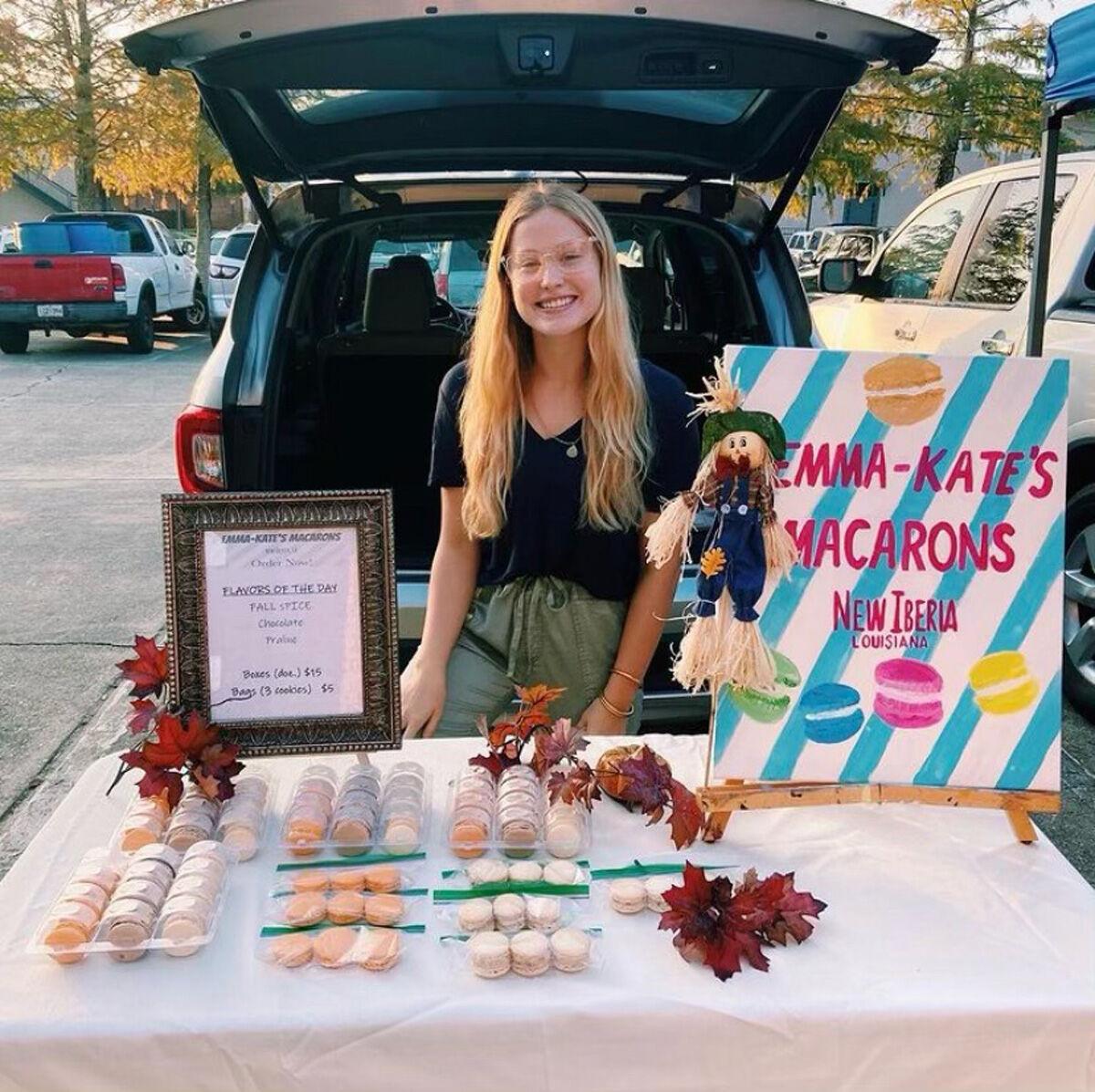 Emma-Kate Schexnayder, a sophomore at Catholic High School, has been perfecting her macaron making skills for the past two years. She sells them at the Teche Area Farmers’ Market when she can, and takes orders via her Instagram and Facebook pages. 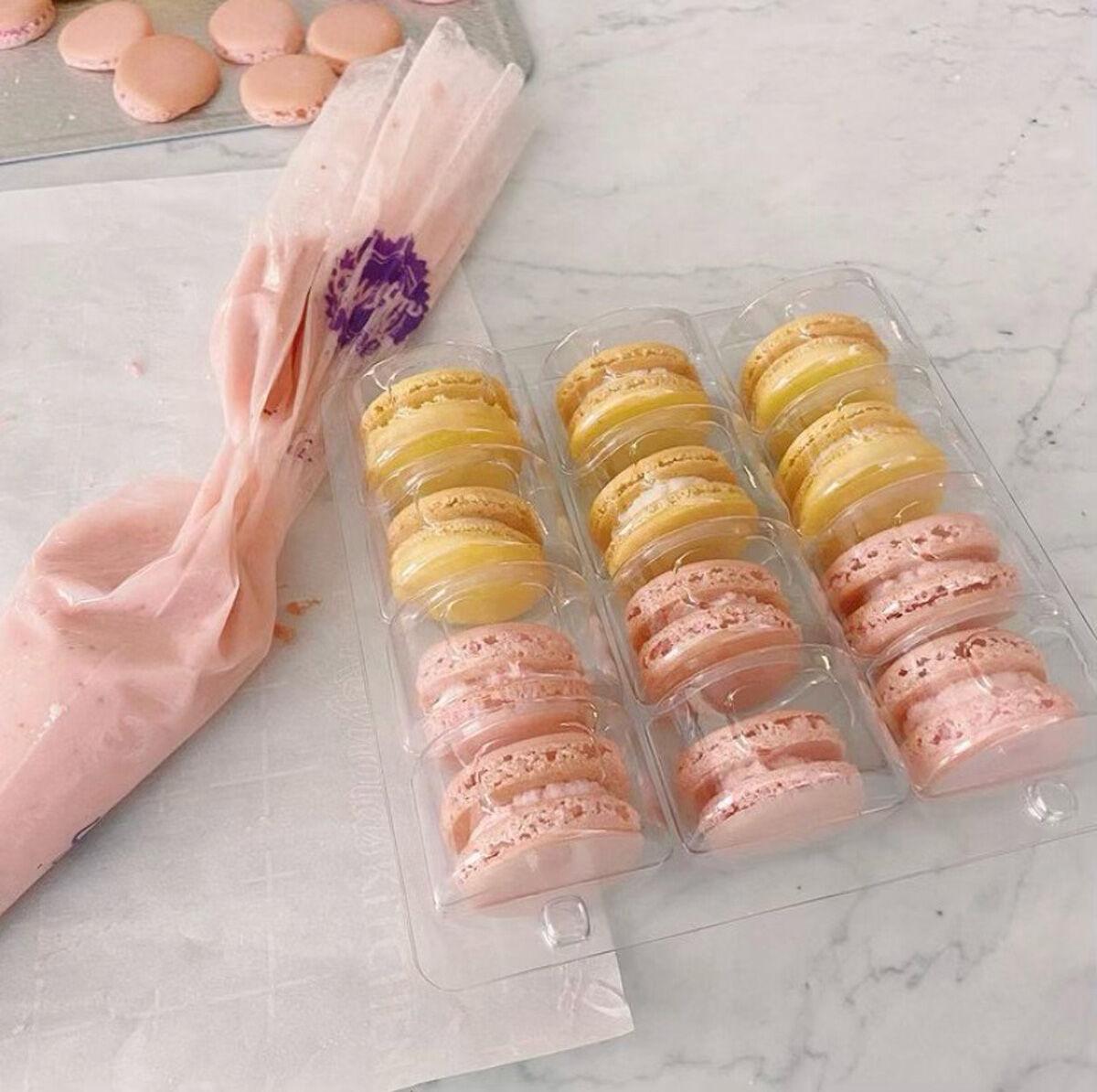 Lemon and strawberry are two of the most popular flavors of macarons made by New Iberia’s Emma-Kate Schexnayder, and peppermint filling is popular around Christmas time, but Schexynader’s personal favorite is pecan praline.

Emma-Kate Schexnayder, a sophomore at Catholic High School, has been perfecting her macaron making skills for the past two years. She sells them at the Teche Area Farmers’ Market when she can, and takes orders via her Instagram and Facebook pages.

Lemon and strawberry are two of the most popular flavors of macarons made by New Iberia’s Emma-Kate Schexnayder, and peppermint filling is popular around Christmas time, but Schexynader’s personal favorite is pecan praline.

Oh, the macaron. You may know them as the dainty and decorative tiny sandwiches that tend to make an appearance at baby showers and serve as a colorful backdrop. Or perhaps you know the sweet confection as a French treat made popular by Paris Macaron shop, Laduree. However you are familiar with the meringue-filled dessert, chances are, if you have a sweet-tooth, you have your favorite flavor and get a little giddy when they are around.

Contrary to popular belief, macarons do not originate in France. Rather they started in Venetian monasteries in the eighth century and were introduced to France by Italian noblewoman Catherine de’ Medici of Florence some eight centuries later. The French have perhaps perfected this tedious-to-make tiny treat, making it the Parisian favorite ever since.

Two Carmelite nuns are said to have contributed to the popularity of the macaron. The “Macaron Sisters,” as they were affectionately dubbed, baked and sold macarons to survive during the French Revolution.

Over the years, the recipe has evolved, and variations have been created, but the macaron continues to be one of the more difficult confections to bake. In fact, the macaron started as only a single cookie. It wasn’t until its debut in Paris that the second cookie was added and made to look like a baby-sized sandwich.

The time and expertise it takes, and the ingredients that go into this labor-intensive delicacy contribute to the higher price of indulgence.

Today we have the meringue-filled cookies sandwiched by a decadent filling of flavor that bakers from all over the world love to reinvent. Aside from the traditional sweet macaron, you can indulge in savory inspired fillings that will challenge the taste buds.

Emma-Kate Schexnayder is a sophomore at Catholic High and has been perfecting her macaron making skills for the past two years. She doesn’t make and sell them to survive any sort of revolution, but she may just be starting her own macaron revolution right here in New Iberia.

Emma started creating macarons because she loved the delicate aesthetic of such a small and unique treat. She knew how difficult they were to bake, but she was up for the challenge. She tried out different recipes on her own and when the cute little cookie continued to crumble, she attended a summer baking camp that offered a macaron class. The class helped her find a consistent recipe that she has perfected over time.

Emma’s day starts early when she’s baking. She situates her supplies and preps her ingredients, starting with whipping egg whites to make her meringue. She then prepares an almond flour/sugar mixture. She folds the meringue and the mixture together very gently and then transfers them to a piping bag which she pipes onto a rubber baking mat. Then they dry for an hour or more before being popped in the oven. Once they are baked, Emma fills icing between the two macaron shells. She packages them up and is ready to sell.

Emma sells her delicious delights to friends and family and people she knows in the New Iberia area. She recently began selling her macarons at the Teche Area Farmers’ Market in downtown New Iberia, which she hopes to continue to do.

Once she became consistent with her recipe and her macarons were up to her standards, Emma took to the internet to sell her tasty confections. Emma is now very successful on her Instagram and Facebook pages where she has been taking macaron orders for two years. The most popular sellers are lemon and strawberry, and during Christmas the peppermint macarons are a big hit. But for Emma, her favorite flavor is pecan praline.

Emma has a bright future ahead of her. She wants to continue to perfect her macaron skills and learn other desserts with hopes to work in a bakery soon. She may be a young baker, but Emma has sound advice for all ages, “Have fun and create! If you are looking to sell whatever it is you create, make sure your creation is consistent first.” Well, we can see Emma takes her own advice.

Find Emma at the Farmers’ Market this summer or order her mouth-watering macarons on Instagram @ekmacs.

3 Things you may not Know About Macarons

Macarons are not the same as macaroons. Macaroons are mini coconut stacks often dipped in chocolate. The Macaron is a tiny, fancy meringue-filled sandwich. Don’t order the wrong pastry!

The first Macaron, made in Venetian Monasteries, were called “priest’s bellybuttons.” Good thing they changed the name!

The macaron was introduced to the US in 1993 by chef de pâtisserie François Payard to the restaurant Daniel in NYC.

What is your favorite dessert from a restaurant?

The crème brulee from Ruth’s Chris. It is a delicious experience to say the least!

What are your plans for the future?

I would love to go to LSU for kinesiology, but I hope to continue baking and working in a bakery.

Aside from making macarons, what are your hobbies?

I am on the CHS jazz dance team and attend studio dance at Studio 84. I really love ballet and jazz. I also play the piano by ear and love to learn different songs.