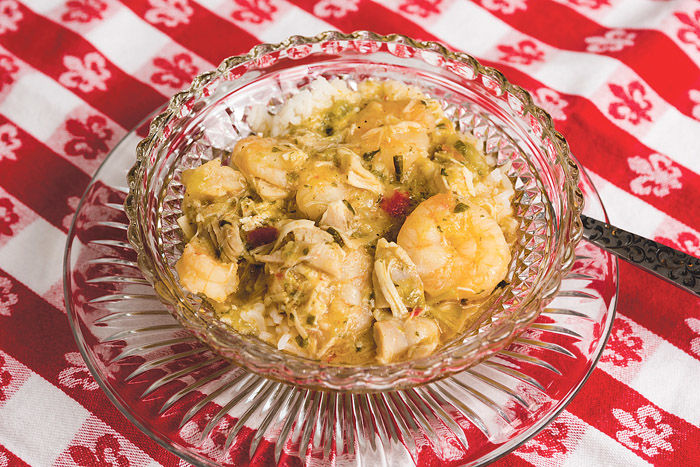 This Phillip Toups recipe for Shrimp and Chicken Etouffeé strattled two categories with stiff competition or it might have done better than second place in the 2016 Cajun Creole Cookbook Cookoff. Lee Ball Photography 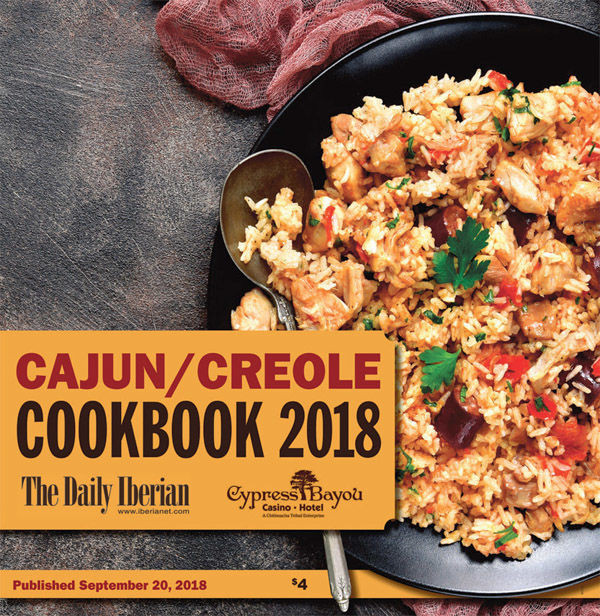 The 2018 Cajun Creole Cookbook sponsored by Cypress Bayou Casino Hotel and The Daily Iberian will be delivered to subscribers Thursday, Sept. 20. Other readers and area visitors will be able to purchase the cookbook for $4 at The Daily Iberian office, 926 E. Main St. in New Iberia, or call (337) 365-6773 to order a copy to be mailed. 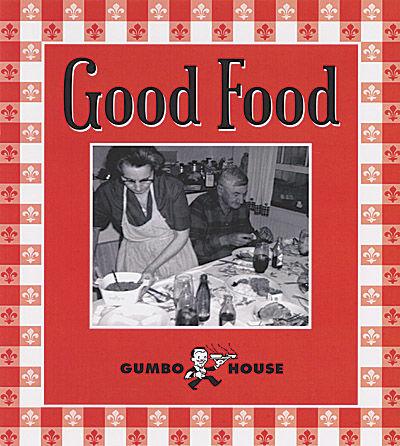 After years of serving friends at his home, Gumbo House, and winning cookoffs, Phillip Toups assembled the family recipes, stories and pictures in two cookbooks.

This Phillip Toups recipe for Shrimp and Chicken Etouffeé strattled two categories with stiff competition or it might have done better than second place in the 2016 Cajun Creole Cookbook Cookoff. Lee Ball Photography

The 2018 Cajun Creole Cookbook sponsored by Cypress Bayou Casino Hotel and The Daily Iberian will be delivered to subscribers Thursday, Sept. 20. Other readers and area visitors will be able to purchase the cookbook for $4 at The Daily Iberian office, 926 E. Main St. in New Iberia, or call (337) 365-6773 to order a copy to be mailed.

After years of serving friends at his home, Gumbo House, and winning cookoffs, Phillip Toups assembled the family recipes, stories and pictures in two cookbooks.

Tomorrow subscribers will receive the 2018 Cajun Creole Cookbook sponsored by Cypress Bayou Casino Hotel and The Daily Iberian. Other readers and area visitors will be able to purchase the cookbook for $4 at the office, 926 E. Main St. This will be the 66th annual collection of culinary treasures submitted by area homemakers, cooks and a few professional chefs.

For the past 15 years a cookoff has been part of the mission.

“The cookbook had been going on for many years into my time at The Daily Iberian and we decided a cookoff would inject new life into the interest for the cookbook and draw attention to the better recipes and cooks of the area,” said Will Chapman, former publisher of The Daily Iberian. “Also, we thought if we could combine it with a good cause, which we did with United Way, highlighting their good work, and great recipes and good cooks — we’d have a winning combination.”

Chapman said that some of the early years the recipes were just collected by the editors. In the 2018 cookbook, several of the past editions are highlighted to summarize the content and recipes that went into making 66 years saluting the Louisiana Sugar Cane Festival and Fair, which was the reason for the 1952, first edition, to be printed.

Today’s featured recipes are from a cook that only recently discovered The Daily Iberian competition, and, after extensive online research, Phillip Toups realized how rare the Cajun Creole Cookbook Cookoff really was to the cookoff arena.

“Being a finalist and winner 15 times with The Courier’s Bayou Gourmet Cookoff, I know that it’s such a special, treasured community event. And very unique to the nation. The only other cookoff similar is Houma’s, but The Daily Iberian’s did it first,” said Toups. “My godson, Derrick, is a big cook, too. He learned from me. We searched for a similar cookoff here in New Orleans and there isn’t one. We both dug deeper, and there is nothing comparable to what Houma and New Iberia are doing. Every ‘cookoff’ we found online was actually a competition.”

“We read the same thing over and over again. Chili cookoff. Jambalaya cookoff. Gumbo cookoff. BBQ cookoff. And on and on. Then when we searched outside of Louisiana we found N-O-T-H-I-N-G!” Toups said. “We found chili cookoffs, etc. And they were ALL the same scenario outside of Louisiana and in Louisiana. Company sponsored teams, with say a $250 entry fee, cooking chili or whatever, for say 500 people and only 1 award given. So you see, the type of cookoff with 8 categories and four or five finalists is a really unique thing.”

Toups said the type of cookoff he experienced in 2016 as part of The Daily Iberian cookoff was great for the community. He liked the fact the cooks for the most part were self-taught home cooks.

“It’s a fun, light-hearted event that’s truly special. I think the cookoff is under appreciated by folks so accustomed to it. And they don’t realize there are only two events like it in the country. And you get in a cookbook annually. The chili and BBQ events can’t say that,” Toups said.

In 2016 Toups took a shot at The Daily Iberian cookoff by submitting his family recipes and was named a finalist in New Iberia’s September cookoff that same year.

“What I loved about participating in New Iberia was the homey, cozy feeling I got when I entered the room. I was embraced by strangers and welcomed. It truly was a down-home cookoff for real people judged by real people,” Toups said. “Nothing fancy, but just a Cajun cookoff. I absolutely loved it! I drove in from New Orleans and we even had a finalist fly in from California. It truly was special. New Iberia was grounded and super friendly with genuine folks having fun, making me feel at home and showing off their self-taught skills.”

Toups comes with a legacy of good cooking. Born and raised in Houma, he ate good food and learned to cook from his mother and father, grandparents, too.

In his “Good Food” cookbook, Toups tells the story of his mother winning Betty Crocker Student of the Year in high school. Both sides of his family were good cooks. His dad learned from his parents who were the overseers of two sugar cane plantations in Houma, Greenwood Plantation (1932-1950) and Southdown Plantation (1950-1972).

“My grandparents lived in the overseer’s house on a farm. Daddy spent his childhood helping in the garden and learning the secrets of making sausage, boudin, hogshead cheese, cracklins, gumbo and jambalaya during the annual pig killing, or the ‘boucherie’. When Pau Pau retired, they continued the family traditions at their new house in Thibodaux.”

Most of his vivid memories of childhood revolve around food, he said. Big dinners at night or grilling in the backyard. Holidays were the best. These were traditions he took with him and started a new tradition during more than a dozen years living in Washington D.C. While there, Toups started Gumbo House, a way of entertaining that has stretched from coast to coast because of friends emulating the festive atmosphere of friends and good cooking.

“I started having friends over for dinner. I nicknamed my apartment ‘Gumbo House.’ The name immediately stuck and the response since has been incredible. Gumbo House is good food, good friends and good times — all Cajun style,” Toups said.

Toups had to cancel his try at first place in the 2017 cookoff due to rescheduling because of weather. He has been instrumental in sharing his thoughts on creating a new event equal of today’s cooks. Until next year, enjoy this year’s recipes coming out tomorrow.

Thanks to all the cooks who submitted recipes not only for this year’s cookbook, but for contributing input for 66 years. It is the culture and the people of south Louisiana that make the food so delicious and sought after the world over. Special thanks to Cypress Bayou Casino Hotel for being our sponsor again this year and all the advertisers in the 2018 edition.