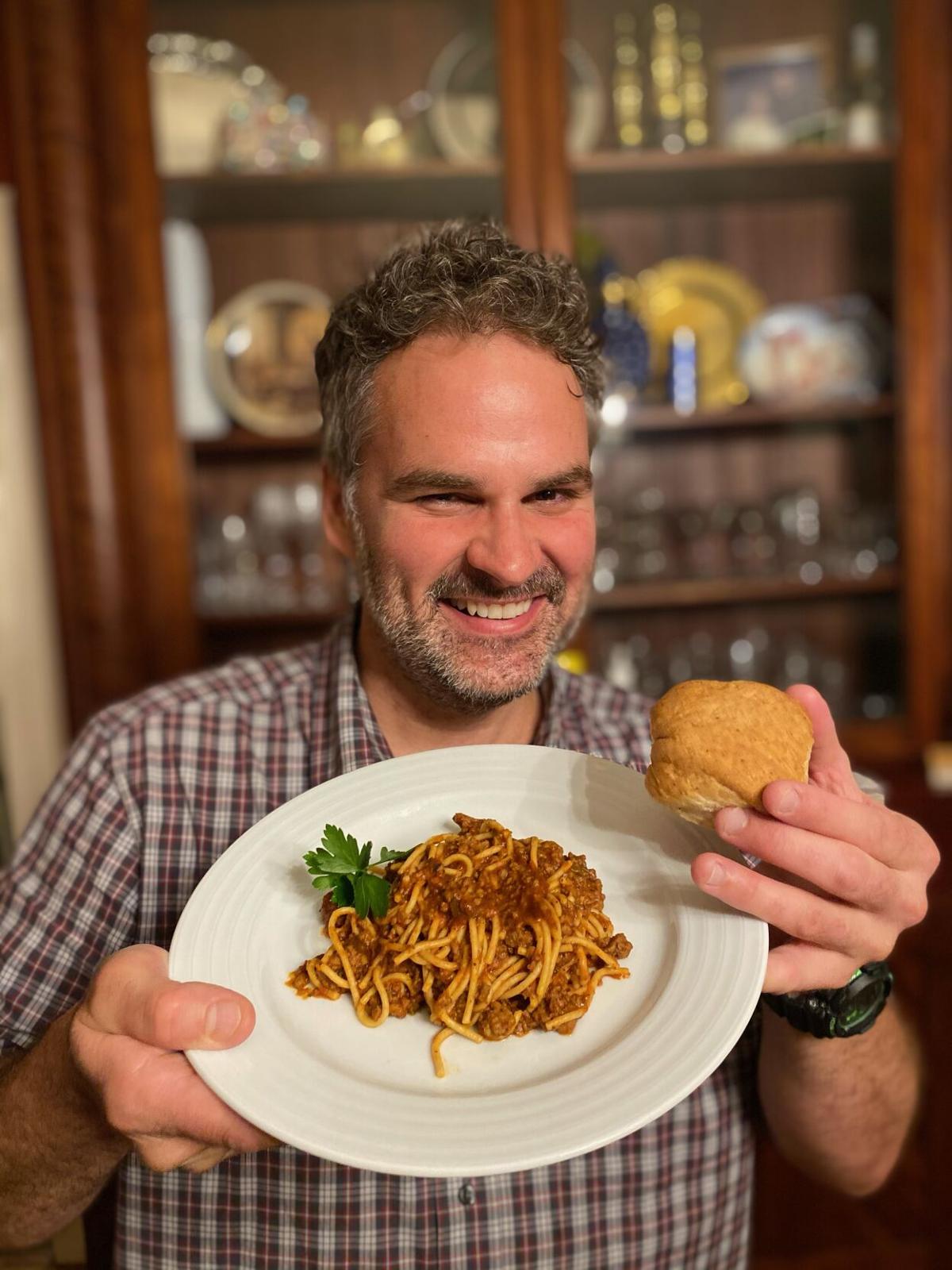 "It tastes just like third grade," Jason Bayard prepares to how down on his Old School Cafeteria Spaghetti. 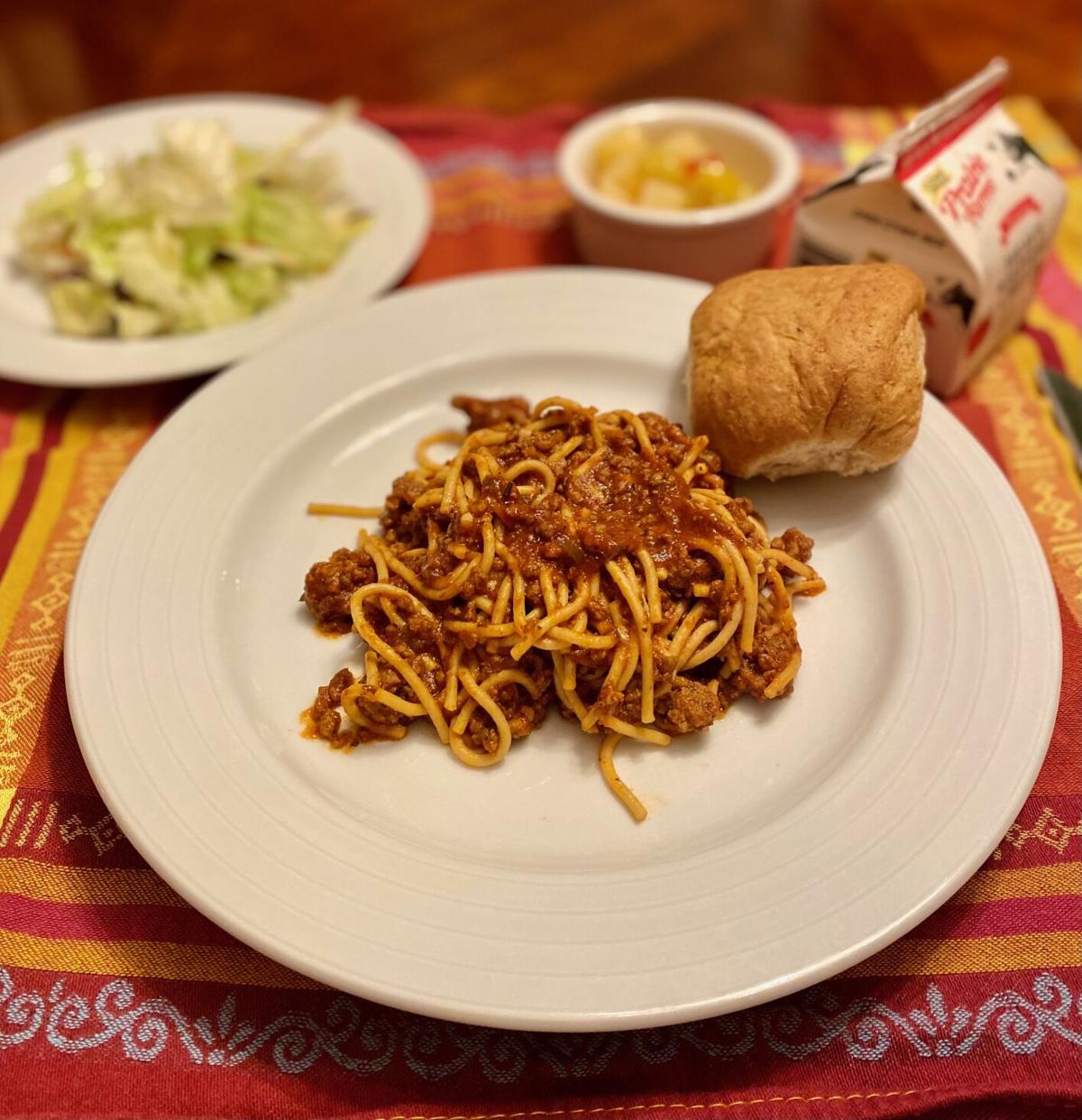 "It tastes just like third grade," Jason Bayard prepares to how down on his Old School Cafeteria Spaghetti.

Jason Bayard can remember being very young and allowed to scramble eggs. The first actual dish he was taught how to cook was either smothered chicken or spaghetti in meat sauce. He was probably around 12 years old. “My biggest influencers in the kitchen are my parents, Cathy and Wilson Bayard, Phyllis Belanger Mata (because we often discuss and compare recipes); and “The Great One” himself; Kernis Louviere,” Bayard said. “I one day aspire to brown meat as well as my mother in law Vicki Holleman, because I think browning meat without burning it is a fine art and can be very difficult at times.”

Smothered Chicken and Spaghetti were definitely Bayard’s favorite dishes growing up. About 20 years ago he noticed the things he cooked didn’t taste exactly the same as they did when he was younger. “I thought about it for a while, and started noticing that I was doing things differently. I had picked up different habits from people, and they ultimately changed the flavor of everything I made,” he said.

“The difference in flavor made me realize I missed how things used to taste, and that is when I decided to get back to the basics. Dish by dish, I would take each one and write down exactly how Mama browned something, or how Daddy seasoned it.”

He then took things a step further and figured out how to deconstruct each dish down to the basic herbs, salt, and pepper; and measured everything. “I feel the key to consistency is measuring. That previous statement will be controversial to most Cajuns, but I don’t care,” he added.

Bayard’s favorite thing to cook for family and friends is a toss-up between gumbo, spaghetti, and pizza made from scratch. “My spaghetti is probably my wife and kids’ favorite dishes, just above my pizza,” he said.

“The dish I will never cook again, at least not unaltered, is John Folse’s “Soul Pork Roast.” It looks and smells fantastic, but tasted like a salt-lick,” he said.

The Holy Grail for Bayard was Old-School Cafeteria Spaghetti. He says he would often see people discussing and arguing about it on social media groups and became obsessed. A couple of years ago he had the opportunity to interview almost every cafeteria cook in Iberia Parish.

“I took meticulous notes and found some of the components were seasoning mixes and commercially prepared sauces. I was able to slowly get each to the basic ingredients. The resulting recipe is now one of my go-to dishes,” he said.

2 teaspoons chicken base or 2 bouillon cubes

Chop all vegetables small, because kids don’t like seeing them.

Serve with fruit cocktail, green salad, and a school roll. Pairs exceptionally well with a small carton of milk.