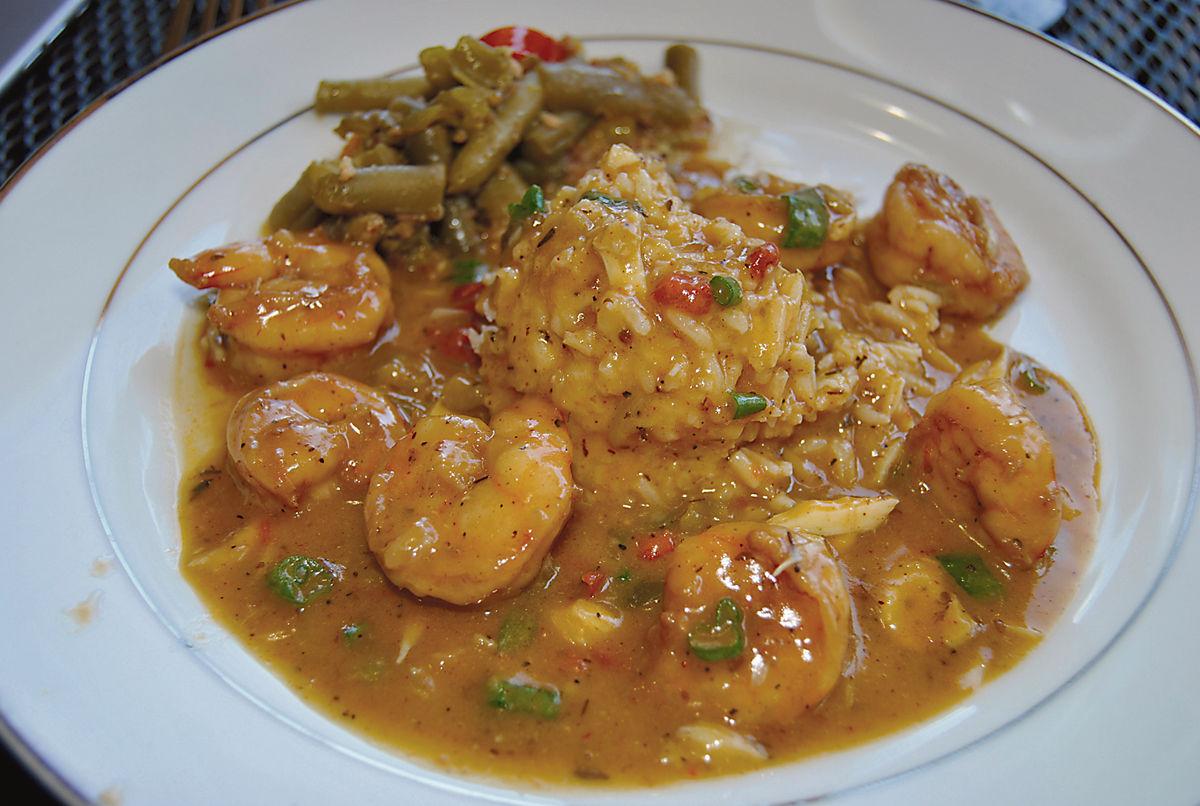 During a Louisiana Seafood ‘State of the Industry’ tour Oct. 18, Tabasco® welcomed Lt. Gov. Billy Nungesser and other guests at its 1868 Restaurant on Avery Island. The catered spread was prepared by Nelson Boutte Sr. Shrimp ettouffee was the entree served at the seafood feast that started with trays of fried appetizers, boiled jumbo shrimp, corn and crab bisque in bread bowls and bread pudding. 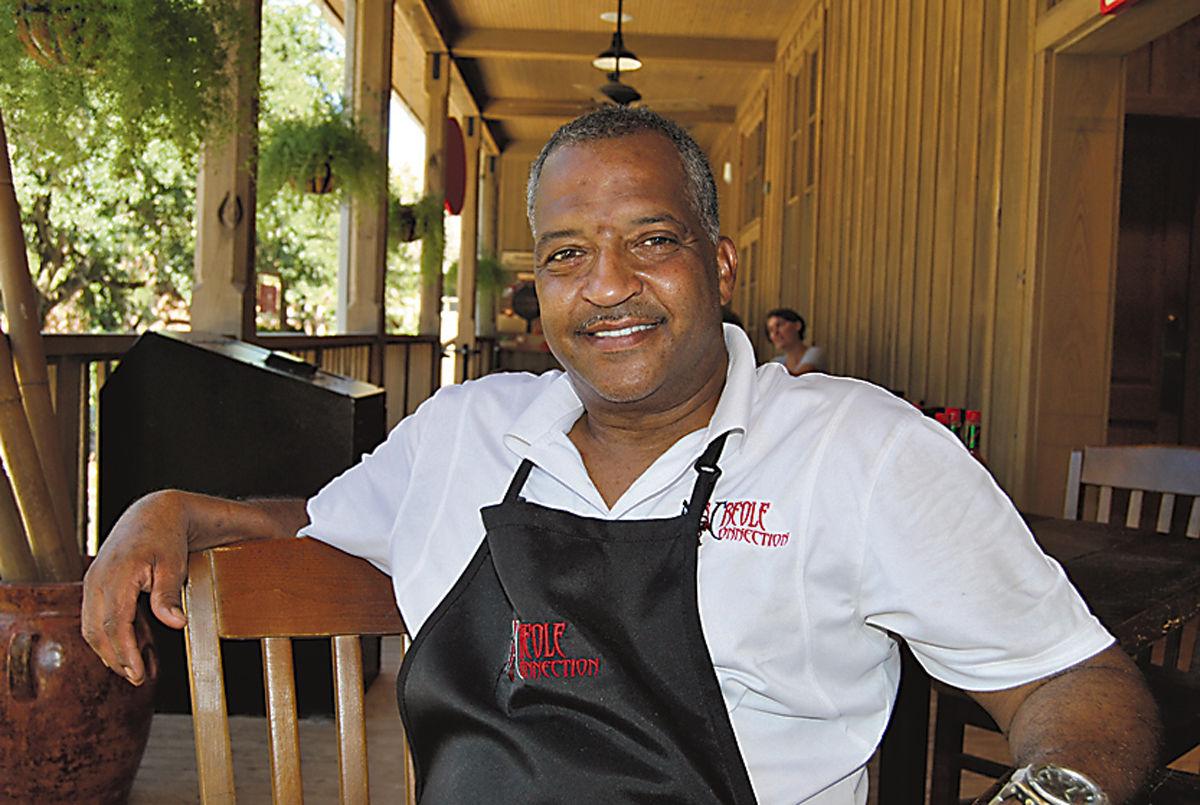 Nelson Bernard Boutte, 50, learned to cook out of a family necessity when he was less than 12 years old. He’s been cooking ever since.

During a Louisiana Seafood ‘State of the Industry’ tour Oct. 18, Tabasco® welcomed Lt. Gov. Billy Nungesser and other guests at its 1868 Restaurant on Avery Island. The catered spread was prepared by Nelson Boutte Sr. Shrimp ettouffee was the entree served at the seafood feast that started with trays of fried appetizers, boiled jumbo shrimp, corn and crab bisque in bread bowls and bread pudding.

Nelson Bernard Boutte, 50, learned to cook out of a family necessity when he was less than 12 years old. He’s been cooking ever since.

Serving part of learning to cook

Born and raised in New Iberia — Grand Marais really — Nelson Bernard Boutte Sr. has been cooking since he was about 10 years old.

In the 1970s, his mom’s mom had leukemia and was hospitalized in New Orleans. Each of the four daughters took a week and stayed with their mother. When Boutte’s mother took her turn away from home, she needed someone to cook for the family.

“My older sister couldn’t boil water and I was next in line,” Boutte said.

No culinary school for Boutte, just watching mom cook, he said. For years he perfected the art of cooking for himself but Boutte kept his skill under wraps until an emergency required him to break the silence. His first job cooking professionally was for the McIlhenny Co.

Boutte was the event coordinator for the McIlhenny Co. and it was his responsibility to make sure everything ran smoothly. Paul McIlhenny was still alive then, and the man in charge.

“I had always cooked but never professionally,” Boutte said. “We had a chef who was scheduled to come cook a special event at Marsh House on Avery Island. I would set up the tables and make sure they had all the accommodations for the guests. I’d call these different chefs to come out and cook.”

“I called and the cook was hunting in Gueydan thinking the dinner was the next night,” Boutte said. “So now I have to go tell Paul McIlhenny his chef is in a duck blind. Mr. Paul said, ‘What ‘cha gonna do? — Fix it.’ ”

Boutte told McIlhenny he could pull off something for dinner but he needed more time to prepare. McIlhenny said he had one extra hour.

The hunting cook never returned to the island. Boutte has been cooking special events ever since. That was nearly nine years ago, Boutte said.

Boutte prepared all the recipes for the Oct. 18 luncheon for the Louisiana Seafood “State of the Industry” tour coordinated by Lt. Gov. Billy Nungesser’s office. Wendell Verrett with the Port of Delcambre, Thomas Hymel with the Sea Grant Louisiana program and others traversed the southern part of the state discussing ways to increase the economic impact of the seafood industry. Tourism and ways for fisherman to work off season were also discussed.

The seafood feast was exceptional. All were Boutte’s creations. But he doesn’t share. He doesn’t use a recipe.

“Momma taught me the basics,” Boutte said. “How to use fresh ingredients, how to make a blonde roux and I picked up some other things along the way. Basic Cajun Creole cooking.”

He is doing something right to be the official hospitality chef for Tabasco® events. Plus, he is still the event coordinator. Sample Nel’s Reserve Gumbo served daily at 1868, a cookoff winning recipe. Four out of the last seven years Boutte has competed and won in the professional category of the World Championship Gumbo Cookoff. He cooks under the Tabasco® name.

Today’s recipes are from Tabasco.com.

The catering truck that supports Boutte’s accidental profession can been seen every second Saturday of the month at Bouligny Plaza. You can’t miss it — the Tabasco® logo is prominently displayed.

“I actually do other catering for weddings and can even serve a full five coarse meal at your house without going in your kitchen,” Boutte said. “It’s all in the truck, even hot water. It’s self contained and a generator runs the whole thing.”

The true test and final question, brought a definitive answer. Boutte uses Tabasco® in all of his recipes — except the bread pudding. One secret he did share. The bread pudding — so delicate it melted in your mouth — is made with LeJeune’s French bread.