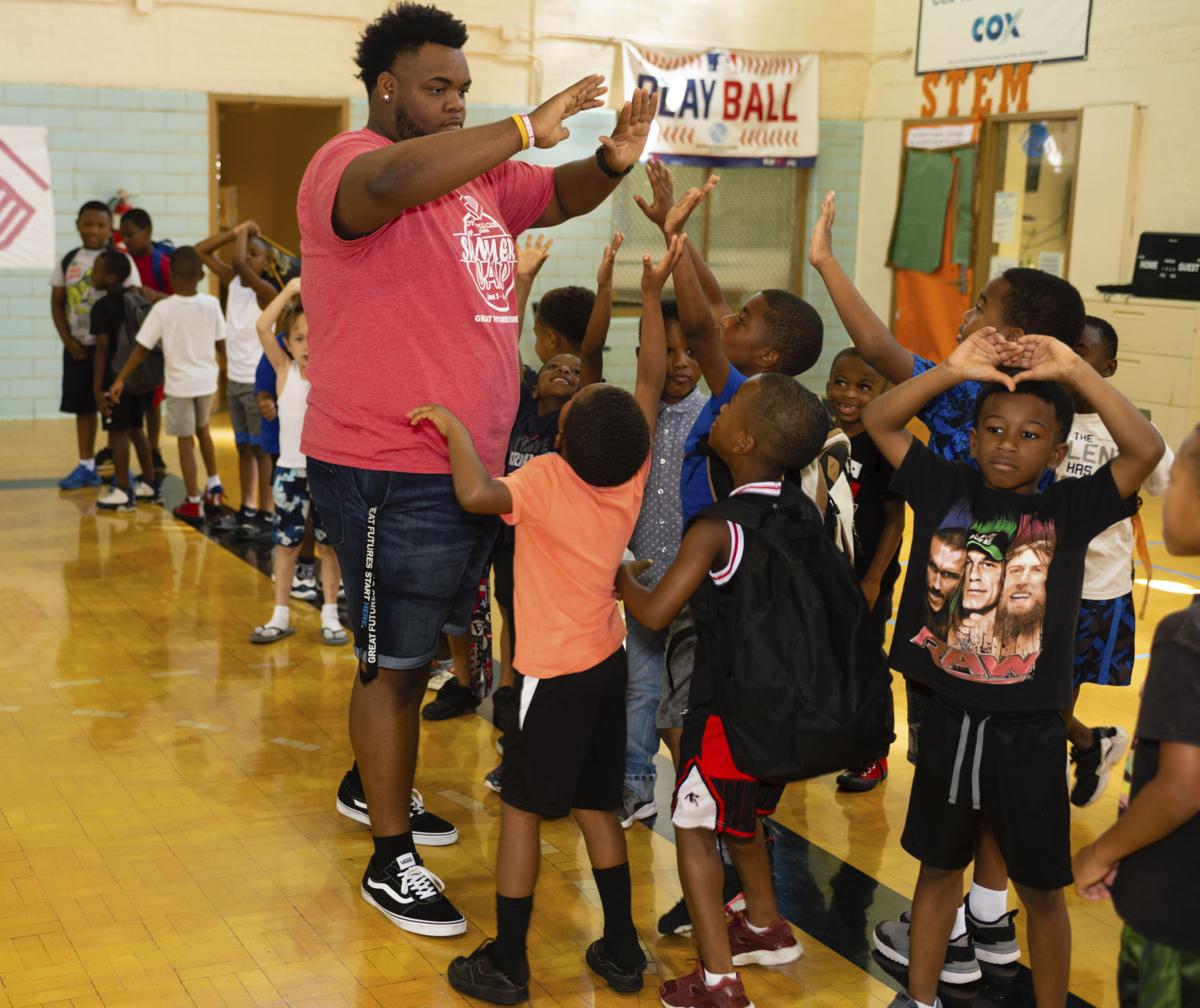 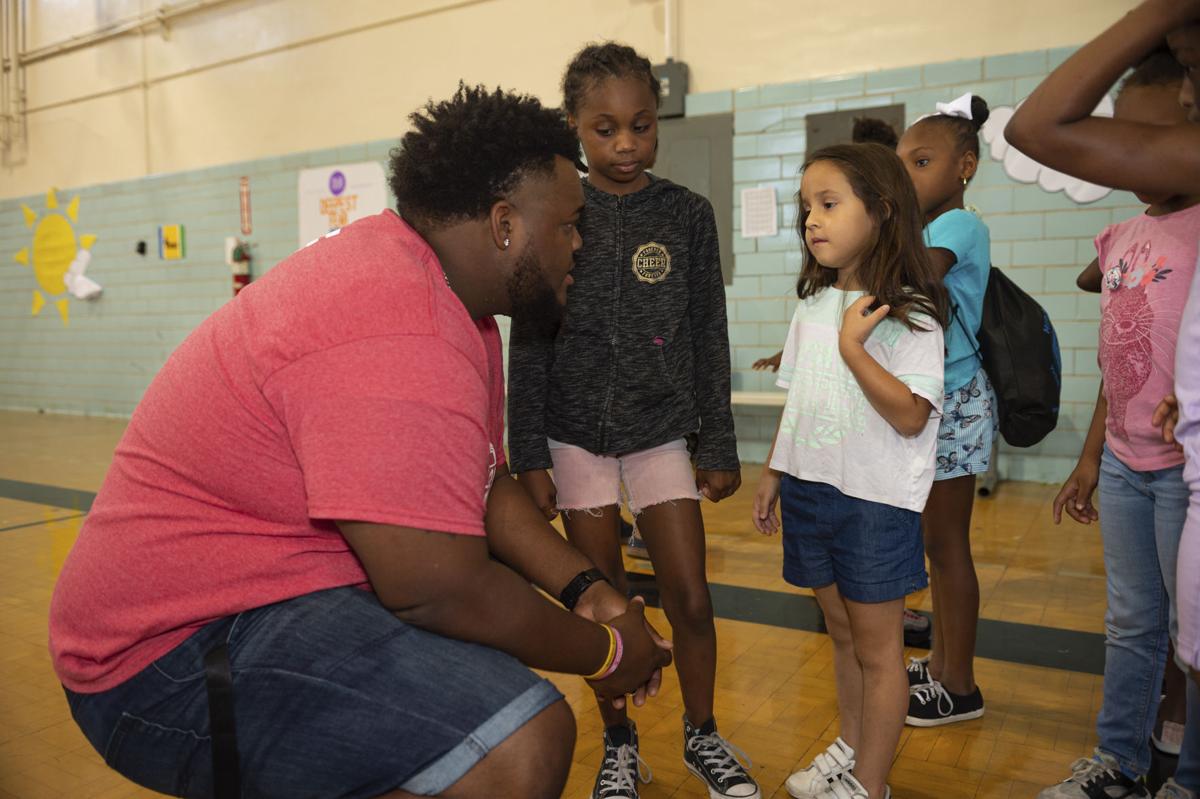 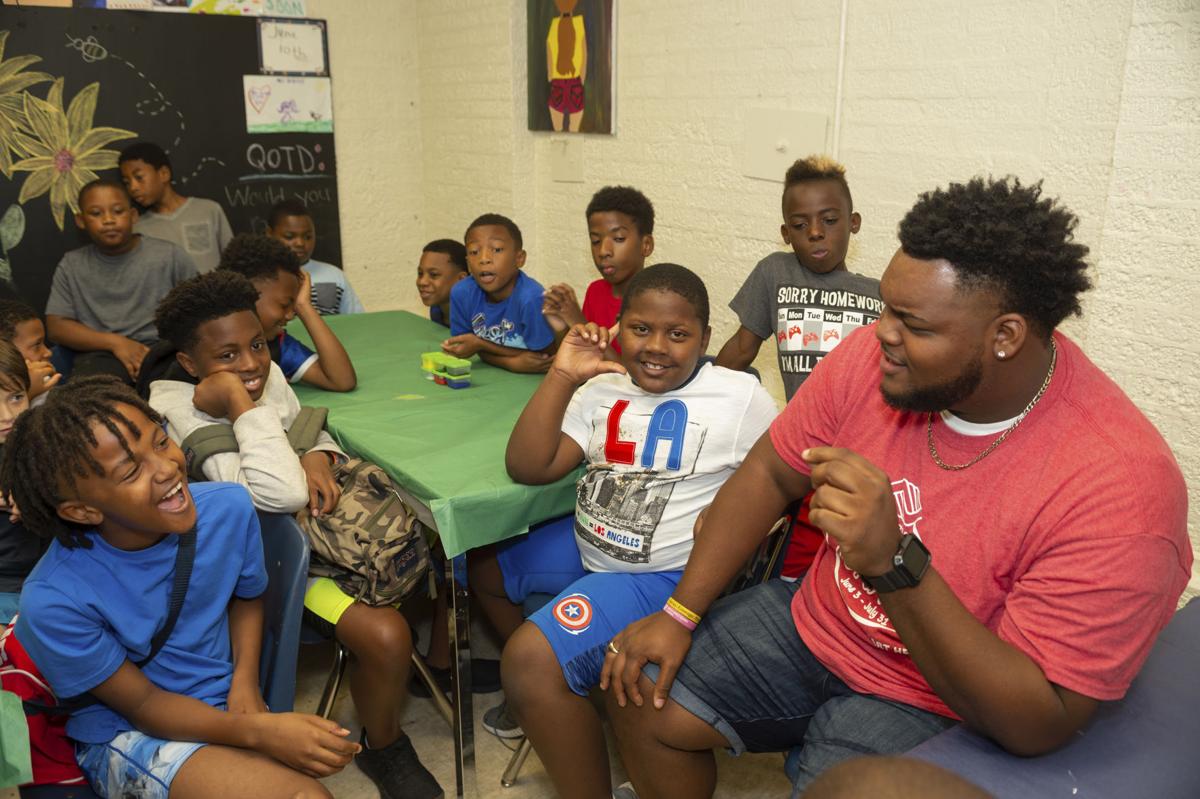 “I just stood there, petrified, not knowing what to do,” says Micah Nicholas describing his first day at the Iberia Unit Boys & Girls Club 14 years ago. Now 24, Nicholas serves as director of that same Club and a role model for the next generation of children.

Talking in his office, (think of a space for a more fun, laissez-faire principal) he shares his story of what brought him back to his hometown to invest in Iberia Parish’s youth.

Growing up, Nicholas had a more stable life than many Boys & Girls Club members, living with his mother, younger sister and grandmother. But, because his mother worked and his grandmother “wasn’t in the best of health,” he became a Club regular at age 10, along with his sister. “I was very shy,” he remembers. “The staff picked up on that right away and allowed me to spend most of my time where I felt most comfortable: the art room. With the help of two art teachers, he slowly broke out of his shyness, while learning something about himself. “Spending time in art, while other kids were elsewhere, taught me that it was ok to learn something different and that I didn’t have to do what the other kids were doing - a lesson that would help me later in high school,” he says.

In the summer before beginning high school, the Club director told Nicholas’ mother about a summer camp at Episcopal School of Acadiana (ESA) that she thought would enrich the student in whom she saw promise. “I didn’t want to go, but my mom signed me up,” Nicholas snickers. Little did he know that the stars were already aligning to set his future in motion. “It was another huge adjustment; but by the third week, it was magical and challenged me in ways I’d never been challenged,” Nicholas says.

At the end of the camp, Nicholas was offered a full scholarship to ESA. He was actually hesitant to jump on the offer because the school had no football program and the offensive lineman had played most of his life. But he knew it was an opportunity he couldn’t pass up, and, as it turned out, the insight he gained there far outweighed the sacrifice of football. “When I was at ESA, I learned how to be comfortable being uncomfortable in life,” says Nicholas, who graduated in 2013 with community service and music awards.

He went on to receive a scholarship to Sewanee University of the South in Tennessee, where he majored in psychology. All along in college, he had flashbacks of students from New Iberia who left town, became successful in their careers, and never returned. Nicholas said he felt a sense of responsibility long before pursuing the job at Boys & Girls Club. “I knew I had to return to New Iberia and put something back at home so that ‘home’ could continue to grow for the next generation.”

Like countless other testimonies from Boys & Girls Club alumni, Nicholas says his life’s path might have been very different had it not been for the Club.

Now, as director of the Iberia Unit Boys & Girls Club, he oversees a staff of 12 and some 75 to 80 students who come, during the school sessions, on weekdays from 3 p.m.-7 p.m. Summertime means busier and longer days with upwards of 240 students attending from 7:30 a.m.-5:30 p.m., Monday through Friday.

Heading the only Boys & Girls Club in Iberia Parish, Nicholas faces many hurdles, transportation among them, with the need for more buses to bring students from schools to the Club - an issue he hopes to gain assistance with from the school board.

When the kids arrive, they are greeted with high fives, head nods or handshakes from Nicholas - (a challenge during the summer, with three times more students). “l’m a principal with a little more fun and freedom,” smiles Nicholas, who students call Mr. Micah, “Mike Mike” or Coach Mike on any given day. As much as he enjoys the work, for Nicholas this is much more than a job. He makes a point to know how the students are doing in school, their home life and remembers most of their birthdays.

On a typical day at the Club, the kids are offered a meal after school, homework assistance and there’s “Power Hour” (after homework), involving high-yield activity games, like solving math problems while playing basketball. Nicholas weans the students off the computer as much as possible. “The majority of the activities keep them active and fit rather than interacting with the keyboard,” he asserts.

Recently, the Club created a community garden, through funding provided by the Iberia Parish Foundation, that will allow students to learn about growing their own produce while bridging the gap between community members.

Meal time is a good opportunity for interaction. “Keeping up with their lives by way of simple conversations is a favorite part of my job,” Nicholas says.

And there are stories - revolving around home lives of poverty and situations the children have to deal with, in which they have no control.

Nicholas remembers a story of his own: “One young boy came to my office wanting to talk. There had been a shooting around the corner from the Club a couple of days earlier and there was still a lot of talk and concern about it. The boy told me his brother had been the shooter and that it was his last day at the Club because his family was moving. He told me that he was going to miss me, but he had to ‘protect his family now.’ Then, as he was walking away, he said, ‘Don’t tell anyone I’m telling you this, because I’m scared that if you know, they’ll come and hurt you.’”

The story still reminds Nicholas of a guiding principal of Boys & Girls Club: allowing and encouraging kids to be kids.

Describing the important relationship between staff and children, Nicholas explains, “All the staff are mentors for the children and every child is close to at least one of them. We try to make sure that we’re that ear to listen to and that shoulder to cry on when they are having a bad day and, if they allow it, we try to replace that worry with energy and excitement.”

It’s been said that “every kid is one caring adult away from being a success story” and for Nicholas his mentors were his two art teachers Kim and Brittany. “I don’t remember their last names – that was sometime between 2004 and 2007, but I would love to hear from them again,” he says.

Identifying with shy children he says, “When I see a bashful child develop into someone wanting to be a group leader, I know I’m doing what I’m supposed to be doing.” In fact, Nicholas sees his work with Boys & Girls Club in an even greater capacity.

“I want to assure that great futures start at our Boys & Girls Clubs throughout Acadiana. I’m ready to be CEO!” he smiles.