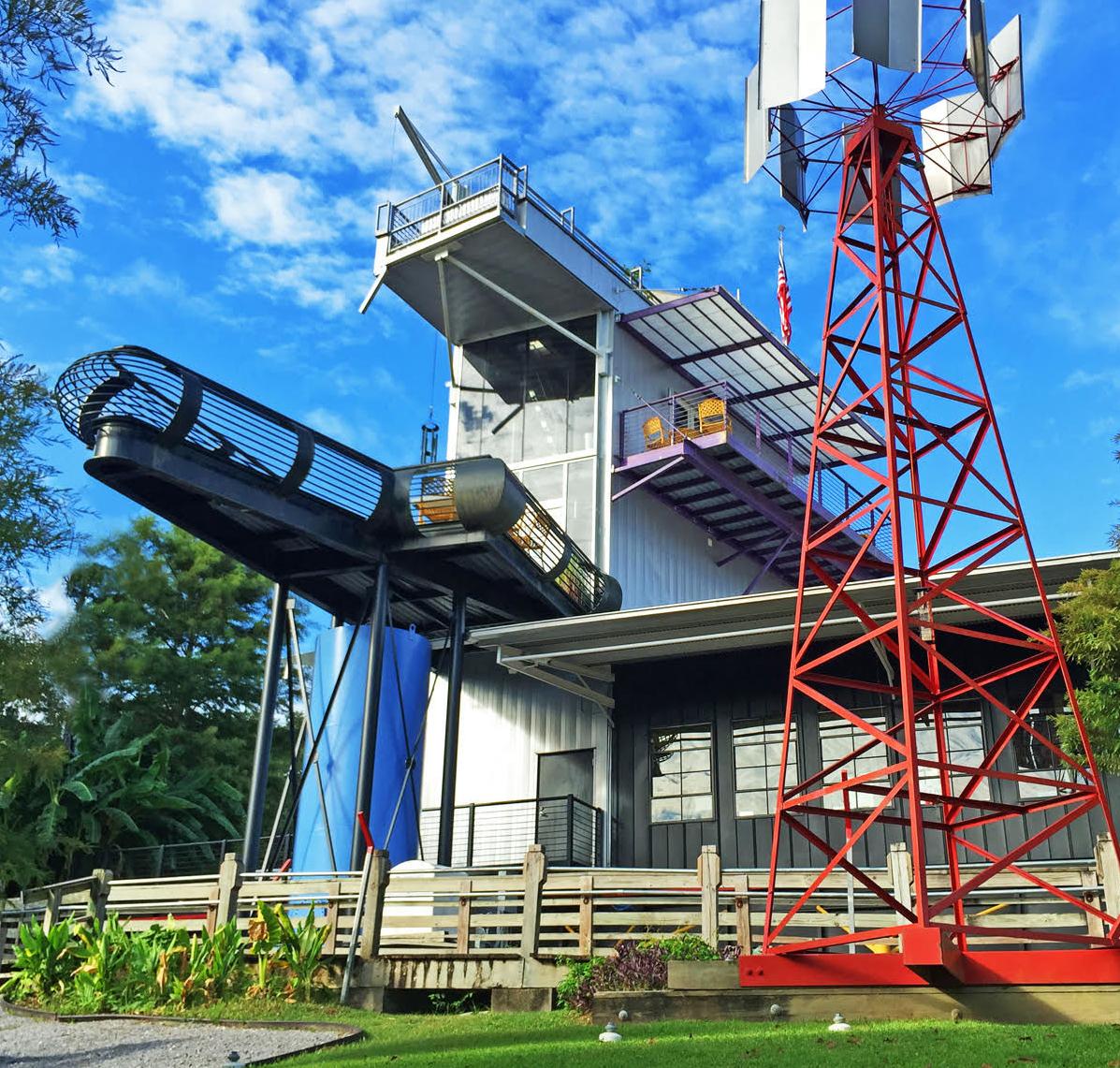 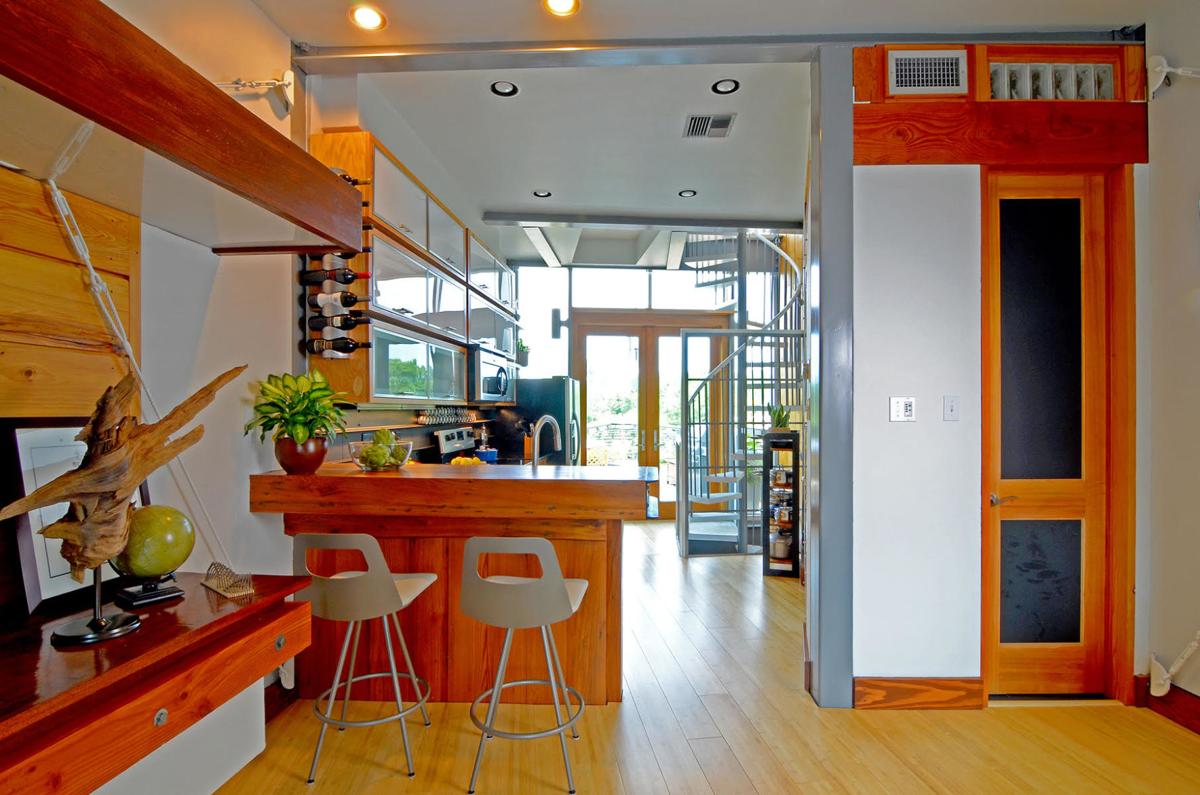 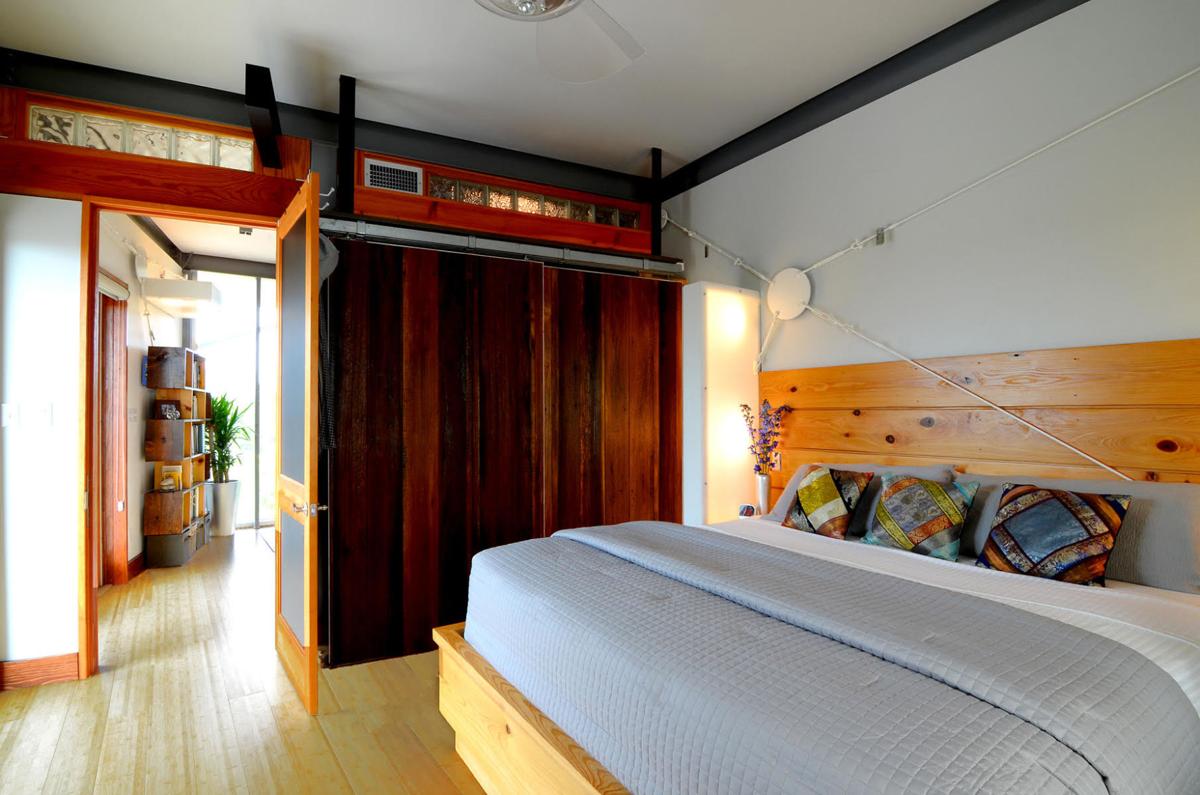 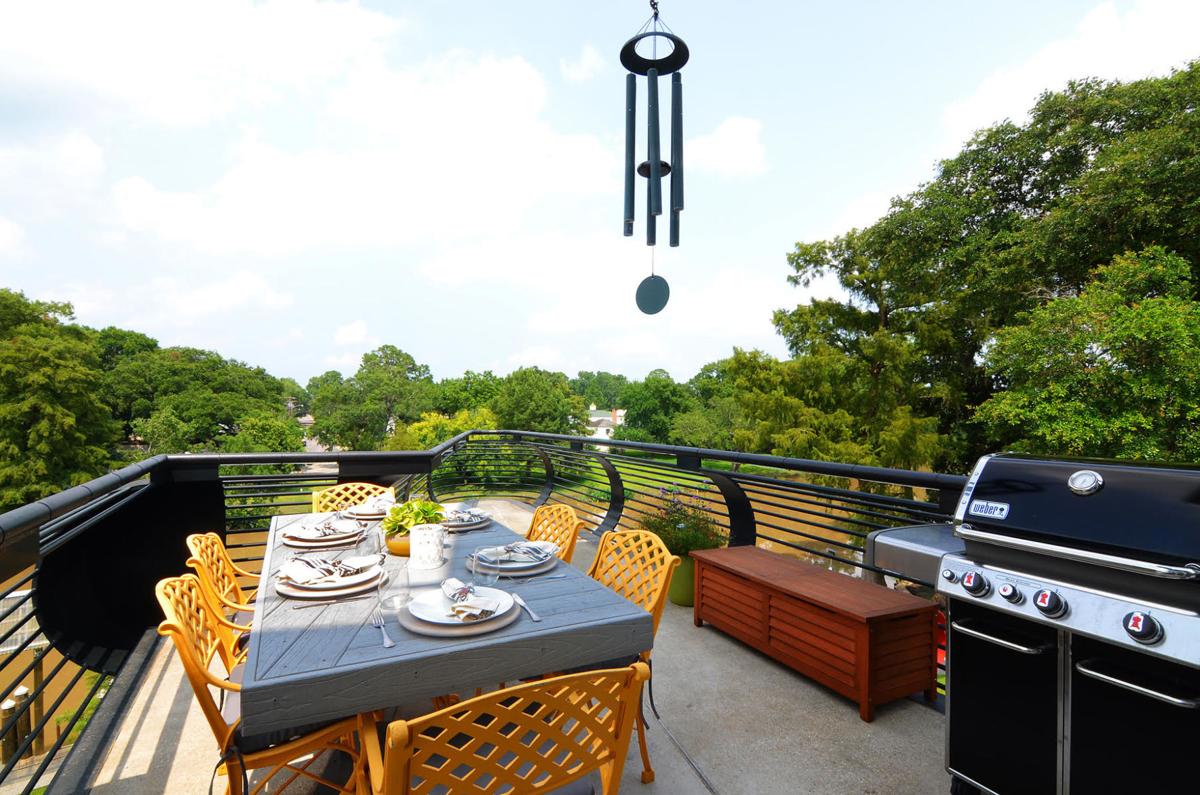 In the historic district of New Iberia, among mid-century architecture and next door to national historic treasure Shadows-on-the-Teche plantation, is what looks like the misplaced home of an eccentric inventor. Rising over the live oaks on the banks of Bayou Teche, the three-story Tensas Tower is one of the newest Airbnb’s in Iberia Parish that is turning heads.

Designed and owned by well-known New Iberia architect Paul Allain, the house brings a unique history all its own to the downtown district. The property that the house sits on, once owned by Allain’s parents, was part of a Ford Motor dealership site. Specifically, the Tower’s 15’ x 30’ waterfront portion of the property, adjacent to Paul architecture office, is where the dealership’s radiator repair shop was once located.

The industrial and nautical influences of Bayou Teche and the Ford Motor dealership are what inspired Paul to build Tensas Tower. He began putting ideas to paper in 2007 and worked in phases until its completion in 2015. That same year, its standout architecture was recognized with a gold INDesign award from “The Independent.”

Paul’s son David, an architect and Tensas’s Marketing Director, says, “Working on your own project allows for creative freedom to produce something like Tensas.” David and his wife -also an architect - lived in Tensas until 2018.

The Tensas Tower name also has an interesting story behind it. In 2003, during the construction of the Bayou Teche Waterfront Development, next to where the home is now, the ruins of a shipwreck were discovered and later confirmed to be the Civil War ship the USS Tensas. The wreckage was preserved and the site was marked after becoming the first and only shipwreck to be listed on The National Register for Historic Places in Louisiana. Since the wreckage is adjacent to the home’s property, it seemed only natural to take on the name.

Opened to the public last year, the metal structure towers 60 feet up with a deck on the lower level joining Paul’s architectural offices on Weeks Street. As whimsical as Tensas Tower is on the outside, (all that’s missing is a putt putt golf course) on the inside, you’re struck immediately by its clean, minimalist sophistication, with bamboo flooring, granite countertops, European-style cabinetry, cypress wood accents, and an opaque light wall. And while 1,290 square feet doesn’t sound big, the floor plan of this 1 bedroom, 1 ½ bath is plenty spacious because of its vertical structure. Paul tackled the unique accommodation with equally unique space-saving solutions, like the industrial-grade steel spiral staircase that goes to every floor. (The rooftop is not accessible for guests.) Natural daylight floods in from the north, seeming to open up each level.

The second level brings to mind a scene from the movie Titanic as you stand out on the very end of the 30-foot long steel deck that replicates the bow of a ship. The dramatic lookout point offers a great 180-degree view down Bayou Teche and of the neighboring plantation during the day and is the perfect place for al fresco dining or drinks while watching the sun set. Inside the second floor are the living room, kitchen, and bathroom.

As the sun begins to slowly set, guests can climb up to the third-floor balcony to catch the last bit of flaming sky and relax in lounge chairs until it’s time to retreat for the night in the master bedroom just inside. The king-size bed, custom designed from cypress wood left over from the construction, is the only bed, but the house does sleep four. Unique track doors in the bedroom are made from salvaged material, as are several features in the house.

Paul says he approached the project as a green design in recycling materials. The balcony rails were made from one-inch thick salvaged piping. The kitchen cabinets were sourced from salvaged long-leaf pine, and the bamboo flooring was recycled as well.

Outside is an expression of liveliness. In front, a bright blue water cistern against the house and a large red and silver windmill. The sculpture garden out back is just as fun with a red metal bench and large modern red structures, designed by Allain, and made by a local metal fabrication company. “They represent the circular movement of a paddle wheel or boat propeller blade,” explains David. A rusty scrap metal structure, resembling a face lurking from the bushes and trees, was created by one-time New Iberia resident Joseph “JoJo” Gilbert.

“I used architecture to create moods and, in this case, to create an opportunity for our visitors to have an experience,” says Paul, an architect for 29 years.

Opened to the public for barely a year, Tensas has already housed guests from as far stateside as South Dakota and globally from Australia. Locally, it’s the perfect venue for brides’ or grooms’ parties or just getting away for a weekend. Regardless, it’s a fun and unforgettable place to escape from everyday life.